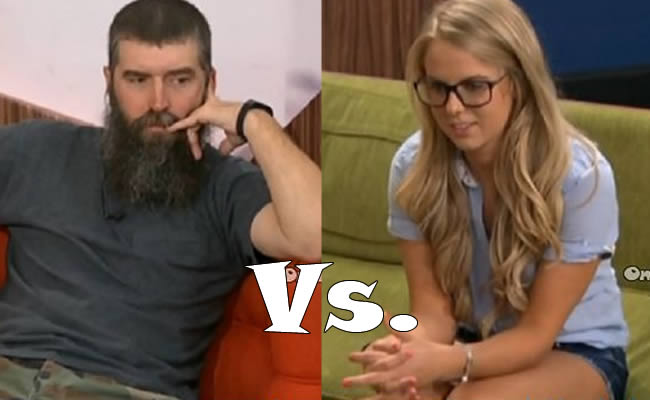 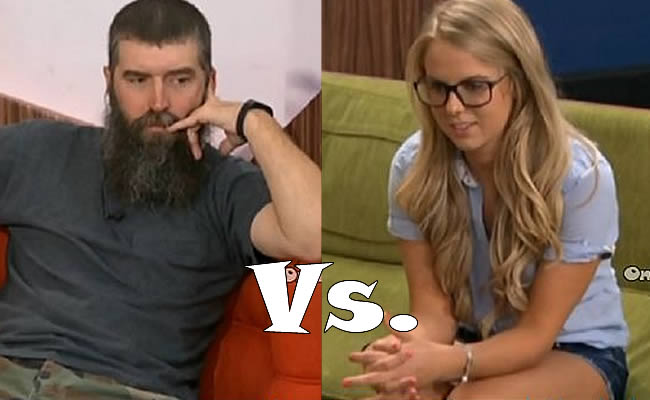 The Live Feeds are archived. You can go back and watch everything that happens
Try It Free! Subscribe now to the official BB16 Live Feeds

Hopefully whoever wins the HOH takes a legit shot at the detonators would love to see Cody/Derrick, Derrick/Frankie, or Frankie/Cody on the block.

HOH Winner’s are Frankie and Derrick

one juror will come back into the game either, Jocasta, Hayden, Nicole or who is evicted next Thursday
BOB twist is over this week 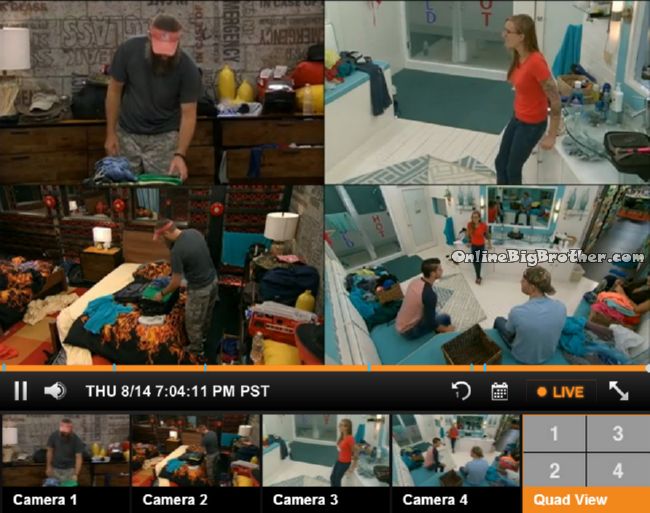 7:06pm Feeds back CAleb complains he went out first.

Simon/Dawg-
What is the password to stream the show live? Also, can i do this with Sunday and Wednesday episodes or just Thursday? Thanks for all you guys do!!

It never asked me for a password.. maybe you clicked an something by mistake

Thanks its working now

Donny for HOH. I hope he wins it. Praying for him!

You and me both. Woo hoo.

You and me both

Tired of the sheep
Reply to  Omg

Idk why they even vote anymore, just ask Derrick who will be evicted

hahahahaha
Reply to  Tired of the sheep

I died when Cody tried to kiss Nicole during the announcements and she mad that face. Hilarious.

Kathie from Canada
Reply to  hahahahaha

The look on Christine’s face was pretty funny as well.

lol
Reply to  Tired of the sheep

The best way the zingbot can zing Frankie is to just ignore him.

Simon/Dawg for AF, they’re doing this for the African children, some of whom I suspect are daughters.

This is going to get real interesting when these guys start turning on each other. I’m not a fan of these guys but I guess that Cody is my favorite of the detonators.

Heard Cody say Donny is just skating by. Interesting remark from one of the biggest floaters in the house! BARF!

Simon, what’s the password for the live stream? Thanks!

I guess this could be a game changer if a certain house guest gets HOH. Let’s hope it’s a good one.

Well , just as I expected, Frankie and somebody (in this case Derrick) as HOH this week. Let me guess, Derrick will get Frankie to put up Victoria and Donny and he will likely put Christine and possibly ask Caleb to volunteer to go on the block.

And then Frankie remains HOH and Donny loses VETO and is voted off. If he wins then Christine goes up and is evicted.

There. That’s the whole week right there. Done.

I meant to say Derrick will put up Cody, not Christine. Cody/ Christine, Cody/Christine I’m mixing them up.

Teri B
Reply to  QUEEN BEE

Exactly. Production sure must love the Bum Squad. The saddest part for me is BBUK is ending tomorrow, the only Big Brother that brings me any joy and makes me laugh (and sometimes cry). Oh well, there’s always BB Australia!!

Rooting for Donny as well. Victoria just doesn’t have a clue unfortunately and I’m not a fan of Christine…so rooting on Donny for HoH!

Link doesn’t seem to be working. 🙁

Hey Derrick if Nicole wants to help Donny then shut up
Who do you think you are the king of the house .
I hope Donny wins HOH
and puts you and Cody’s ass on the block

Donny for the WIN

Does anyone else remember when Nicole and Hayden were on the block against Pow and Brittney, and there were sayings that played that night which they memorized…but I don’t think Big Brother has done anything with those sayings yet, right? Maybe they will come into play in a comp to send 2 people from the jury back to the house, paving the way for the return of Haycole. Of course, after Hayden explains to Nicole that they need to get out Derrick and Cody. Hey, a head scarf can only dream…

GO ZACH ATTACK. I fear your game is screwed with so many HOH scenarios that you need a win here. if its still BOB, you need to win then lose the BOB and be free for another HOH.

get em Zach! give Zach a power! #WILDCARD

Donny could win HOH. But if BOB is still around, either Christine or Victoria would end up going home. BOB will protect the guys alliance.

Silly Frankie……no one believes you were by yourself in BotB. We all know you had the best partner in there in Alison Grodner.

Hope Donny wins as well…. This is getting so boring with the stupid all vote the same!! No one has balls lol! Ready to stop watching. Very boring big brother this year… Very disappointing

does HOH result out yet?

Josh
Reply to  it is hard

Derrick and Frankie won the HOH.

I can’t watch the show tonight (intermission and checking in) and hoping Donny wins HOH! Team Fear The Beard!

And this is why I can’t stand Derrick:
“This is for you America” with his eviction vote.

Who the hell does he think he’s fooling with his obvious pandering. Ugh! Get him out!!!

Kathie from Canada
Reply to  NC_Donny

He was slick again after Nicole was evicted. Notice he was the one who held on to her bag and was the last to say goodbye. He always makes sure that the HG leaves on a positive note with him. Clever move even though I’m not a fan.

Agree, Derrick saying that made me want to puke. Now that Frankie (yuck) and Derrick (yuck) are HOH I want to see if they keep “TA” Donny safe. Probably Donny is going up still , what lie are you going to tell us, the viewers, this time Derrick?

Right! ! That fag (sorry if u take offense) already said the ONLY reason he wasn’t getting Donny out this week was that he didn’t want him to have the chance to come back! Who does he think he’s fooling? WE aren’t the brainless idiots in the house!!!

Ugh, was hoping they would do away with the two HOH’s.
Donny is toast. Even if he wins one of the HOH ‘s. It is too easy to evict someone this way. They will just throw the BOB to make sure Donny isn’t the HOH and than backdoor him. Simple. Unless production helps Donny he is done.

Still as popular as ever.

Love to hate it

What the heck happened to endurance competitions??!! All they have been having is question comps for HOH this season! I want to see people actually fight for it!

My theory
Reply to  Love to hate it

Since Caleb show boated during the first endurance and Caleb isn’t who production wants to back they stopped doing endurance. Of course they will resume hopefully tonight but it won’t be as much as normal.

Detroit Girl
Reply to  My theory

Right? Heaven forbid we like someone other than the people given the green light/forced upon us by CBS (Constant Bull $&!t) -at least when it comes to BB

QUEEN BEE
Reply to  My theory

My theory, I love your theory.

echo 1
Reply to  Love to hate it

CBS has figured it out its not cost effective to build an elaborate endurance sets. Who of the House guests are capable of lasting more than 15 minutes straining holding on getting wet and cold, paying all that labor and material costs for zero air time LOL!!!!

I guess they do not send the HGs to the jury house with DVDs anymore. Otherwise, how could Derrick think he could get away with that obvious flattering goodbye message?

That could be one of the biggest twists of BB16 !! no dvd

Cody stated that Donny has “skated by.” Donny plays well, does well in the challenges and is well liked. What exactly has Cody done except paw Christine?

Anyone have any updates…

I just had a thought. I bet the evicted houseguests will compete against each other. The winner will return to the house as one of the new head of households.

That’s what I was thinking. Wrong again. Guess that might be too much of a game changer for production to deal with.

Welp, another week of just reading the site and not watching the show.

It’ll be Donny or Victoria and it will be a house vote.

Frankie is a complete tool. Did you see him celebrate his HOH win? Isn’t he in his 30’s? What a dork.

Derrick and Frankie…..sigh. More of the same.

Worst outcome ever! Nothing changes again. I figure Zach and Donnie will be the initial choices to go up. 🙁

Rachelle, when you have a gut and you go on national TV you cover that shit up.

Guess I know the nominations this week. Let’s see Victoria, Donny, Zach, and Christine. No shocker..,,

I think they would have to back door Donny because being part of team America, they have to save their butts. I think Derrick will put up Caleb and Christine or Zach and Christine and Frankie will put up Victoria and cody

I kind of hope Zach offers to throw the BOB, gets paired with Donny & decides not to throw it. They could beat Christine & Victoria for sure.

I was trying to be diplomatic during the HOH competition. I was hoping for anybody but Cody to win the HOH.

Also, what do you guys think of the 2nd choice for Team America quest? I do not know who would be affected by being prevented from sleeping for 24 hrs except for Donny.

Really?? Rachel?? Anyone find that segment random and pointless?

When she said Caleb has a chance of winning this, my reaction was this. http://i.imgur.com/TxqzK9I.gif

Let’s just be glad we only had to suffer through 30 seconds of her. I half expect every new season of BB she will be part of the HGs since CBS loves her so much.

The Rachel segment was a time filler there is no interest , no drama no story line! Maybe next week they bring two former house guests, add a few more commercials, and a 10 minute re cap from day 1!!!!

Thumbs up if you hate Frankie and Derrick

any idea why zach was punching himself?

Rachel had me cracking up on the live show! And she loves Zankie lol!

So glad Donny is safe for another week. Looks like Derrick and Frankie will be trying to protect him until TA missions are over. And I doubt Frankie will try to get rid of Zach again!

Just when I thought it couldn’t get any worse! Derrick and Frankie win hoh, so disappointed all I can hope for is they start turning on each other!

Maybe they can just turn out the lights.

I know they will put up Donny and Zach, Christine and Victoria.

Seeing how this season has been played its highly doubtful they put Donny and Victoria together. They would be risking them pulling out a win and their both safe. Most likely each HOH will nominate one of them like they been with targets all season.

And Frankie’s pink hair was a part of one of the clues in the HOH competition,really? Again,not a surprise he won the other HOH spot. Not that it matters since he never leaves the HOH Suite anyway.

Irked by the stupidity!

Who wants to bet that Frankie puts up Donny & Victoria
And Derrick puts up Caleb & Cody .

Cody looks like the love child of Ralph Macchio and John Travolta.

I’m going to miss Nicole. I didn’t love her early on. Her accent drove me nuts. But she grew on me and turned into one of my favorites. Maybe because everyone else left besides Donny and Zach are such huge douche bags.