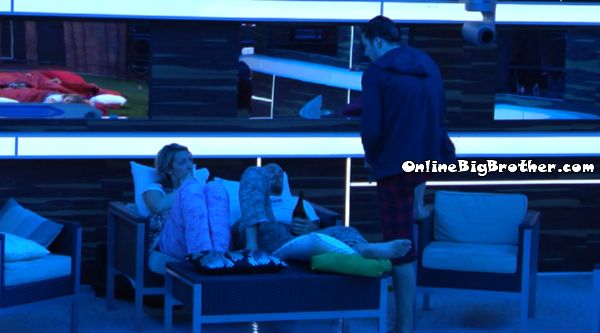 Allison saying that Canada may not be liking her game move and that is why they nominated Andrew. Andrew says it was a good move to stick close to him.

Jon joins them, Jon says he’s not a guaranteed vote to evict you.
Andrew thought he was because he never used the POV
Jon says he didn’t want to risk someone he cared about going up. Andrew doesn’t think Neda would have been nominated
Jon says Neda really hasn’t done much in the game he thinks she would have and he didn’t’ want to take the risk.

Jon thinks in this game every couple weeks Canada will have power..
Jon – “Don’t count your chickens” 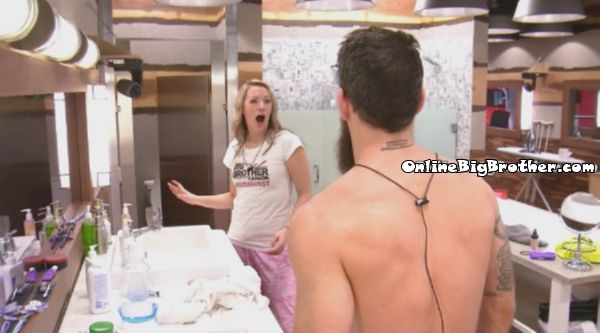 Sabrina says it’s odd that Sarah jumps down Andrew’s throat every 2 seconds.
Andrew – ‘Ya”
Sabrina – “Why.. i find it sketchy”
Sabrina – “If you talk bad about Neda or Jon She doesn’t say a word”
Andrew – “relax relax”

Allison – Jon thinks i’m the LIZA of the season”
Jon thinks she’s just getting close to the guys to further her game. Allison adds that JOn thinks Allison will grab onto Kenny once Andrew leaves.
Andrew – ‘That’s so F*** rude” 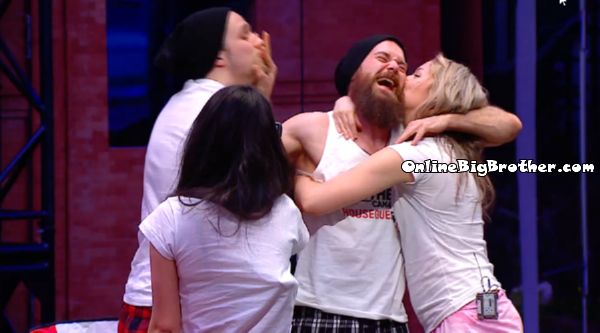 9:19pm Neda and Jon
Neda saying Sarah legitimately sketched her out today asking her if she was was scared of Jon or just saying I amd to cover up. Jon Explains the only reason is he told her he would take Sarah over Neda to the final 2. Jon – “She wants us three to the end and she wants to make sure she can trust you 100%”
NEDA says it’s tough to talk to Sarah because every time they get a moment Sabrina is lurking around them and Sarah freaks out.

Adela and Heather join them and they start talking about fighting
Jon I don’t like to fighting but i’m not afraid to bleed
Adel says he’s never backed down from a fight.

Heather said she had Peppermint Schnapps and Irish Cream. 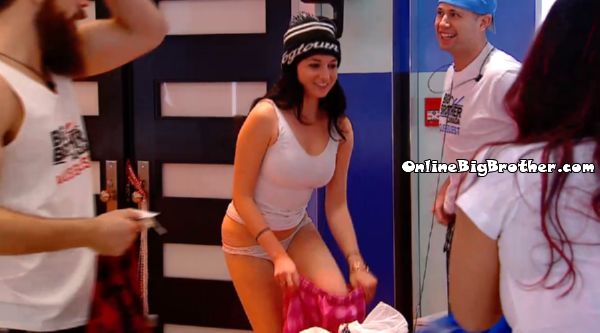 House Guests are called to sing O’Canada They run up to the HOH to get their HOH gift. They are given Pajamas and told there will be a slumber party in the backyard. They are reminded to get everything they need because they will be locked out all night.

Jon reads out the card – “House guests as HOH this week Canada wants to reward you for being such good sports. You are all invited to a Big Brother Slumber Party in the backyard.. Put on your PJ’s and get your best ghost stories ready. GRab everything you need cause you’ll be locked out all night”
Kenny and Adel get tank tops the rest get regular tops 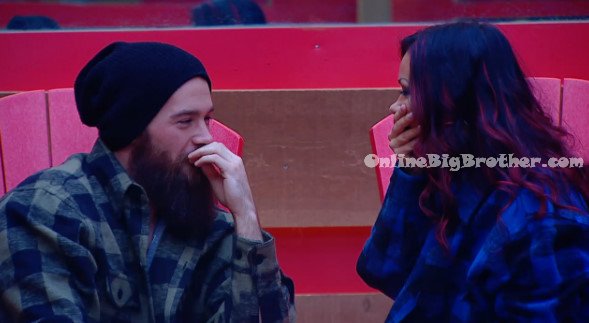 3:20pm – 3:35pm Kenny and Sarah are talking out in the hot tub room. After awhile of talking game and about Andrew. Kenny comes out and tells Sarah that he is gay. He says at first I it was a strategic thing. He says that the diary room knows and so does Canada. Sarah says OH MY GOD! Sarah says now my husband won’t be worried about me with you. Kenny tells her that he was with girls up until recently. He says it was the hardest thing to hide. Sarah asks if he is going to tell anyone else. Kenny says he doesn’t know. He says I needed to tell someone or I was going to die! Kenny says that he was hiding it because his ability to woe women. Sarah asks if he always knew. Kenny says no but I was always attracted to guys. Sarah says so when you’ve said you’ve had a s*x dream .. that was about a guy? Kenny says well I did have a s*x dream about a girl in here. Kenny says that he had a little thing with a married couple awhile ago .. and soon after he says he knew he was gay. Kenny says that he’s worried about telling other people and them not trusting him. 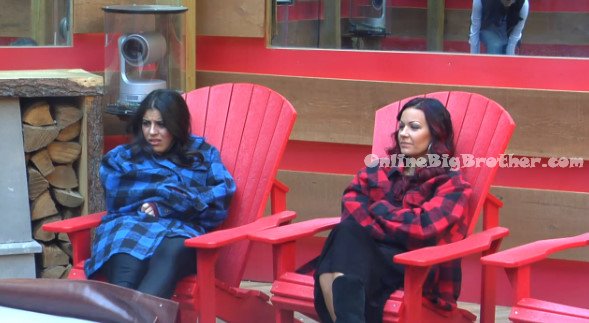 2:15pm In the storage room – Allison comments to Rachelle about how obvivious it is they are all working together. Rachelle says I know. Allison says it just makes us more hungrier to win. Rachelle says its just too bad Andrew has to leave. Andrew joins them and they head out to the sit out by the pool.

Meanwhile Neda and Jon are laying on the backyard grass talking. Neda says she hopes she wins HOH so that she can get a 2-6 of rum. Big Brother puts them on a backyard lock down. Jon tells Neda that she looks pretty. Neda tells Jon that he talks really loudly in the diary room and people could hear him. She says that she started tapping her foot so that people couldn’t hear him. Jon says that’s f**ked up. They talk about who they would nominate if they won HOH this week. Neda says that Adel promised her that if she went up on the block he would take her off but says that he also promised Rachelle that too. 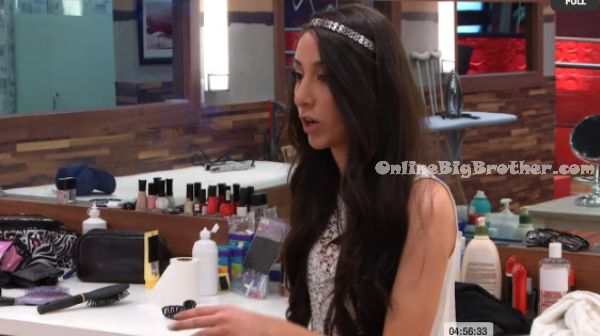 10:10am – 12:30pm Big Brother blocks the live feeds for the Power Of Veto Ceremony. When the live feeds return we learn that Jon as the power of veto holder chose not to use the veto on either of the nominees. As a result Andrew and Sabrina are still up for eviction and one of them will be going home on Thursday night during the live eviction.

Out in the backyard by the pool Sarah is talking to Arlie. She says that she’s worried about being outed as a traitor to the first five. Big Brother switches the cams to the kitchen where Andrew is cooking. Andrew says to Allison – Well he (Jon) doesn’t need to pretend to be my buddy any more. Meanwhile in the bathroom Neda and Sabrina – Neda talks about how she knows Jon would keep her safe over a lot of people but says she isn’t sure he would keep her safe over everyone. Sabrina says that she feels really alone. Neda says that she shouldn’t. Sabrina starts telling Neda about her conversation with Adel last night. 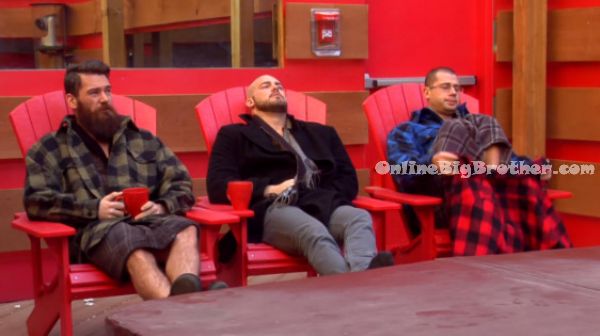 8:15am Big Brother wakes up the house guests. First thing Sabrina does is picker her nose till it bleeds (gross). She then asks if anyone has any Kleenex because her nose is bleeding. She then gets up and heads to the bathroom. The house guests comment how they have the power of veto ceremony and diary room sessions early this morning. Andrew comes into the bathroom to get ready and starts picking his nose in front of the mirror. (It beyond me how both of these people have been shown and told that Canada doesn’t want to watch them pick their nose and they still do it.)

In the kitchen: Andrew, Arlie and Kenny are waking up in the kitchen and eating their breakfast / drinking coffee. Andrew says to Kenny – I need to think of a straight forward speech to say during the POV. 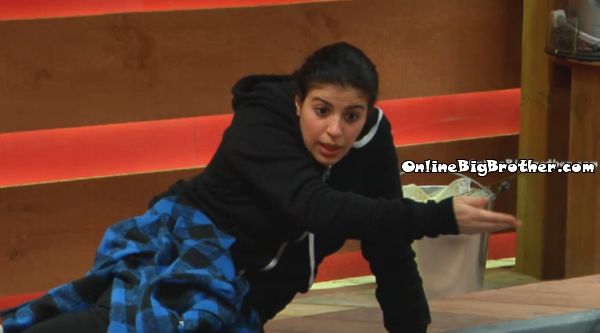 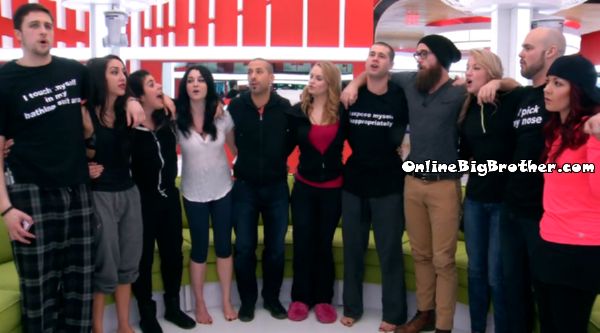 11:20pm Storage room Jon and Sarah
Sarah is saying she trusts Arlie and Jon but Adel scares her. Jon only trusts Sarah, Arlie and Neda in this game he wants them to be safe. Jon says right now him and Kenny are the furthest apart and he knows Kenny and Sarah are very close. Jon wonders if Kenny will put him up. Sarah says he’s never mentioned it. Jon says he’s not going to be the one putting Kenny one the block. Sarah says when it was brought up it was Andrew who started mentioning putting Jon up. Jon says he guarantees he’ll never play her in this game.

Jon – “I put a lot of trust into what Arlie is doing.. If we stick to it we’ll be really OK” 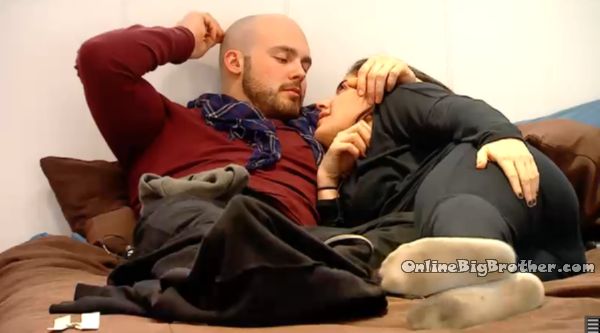 Feeds were blocked all weekend and there was no leaks, At least last year they gave us a small clip with a bit of info but this year no chance. After tonight’s episode we will know who the nominees were and who won the Power of Veto. Tomorrow they will have the Power of Veto Ceremony and if the veto is used the house guest with the third most votes will go up. If the the POV winner was that third houseguests than the houseguest with the fourth most votes will go up.

Our OBB Poll had the nominees being Sabrina, Andrew with Kenny third and Rachelle fourth. Most other fan site polls have similar results. It’s safe to assume two 1st5 members are going up initially. 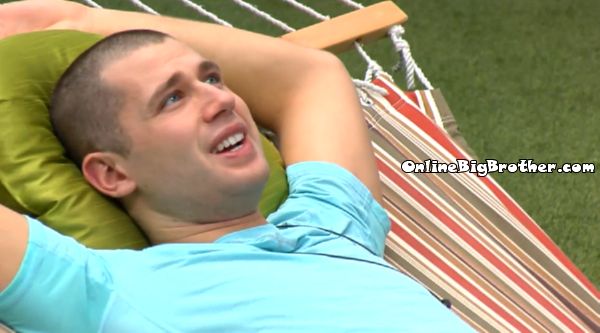 Arlie says he’s unsure about Heather for the long term but right now she’s fine. Arlie thinks they will have to cut Heather before she makes her move, he’s certain she will make a move.