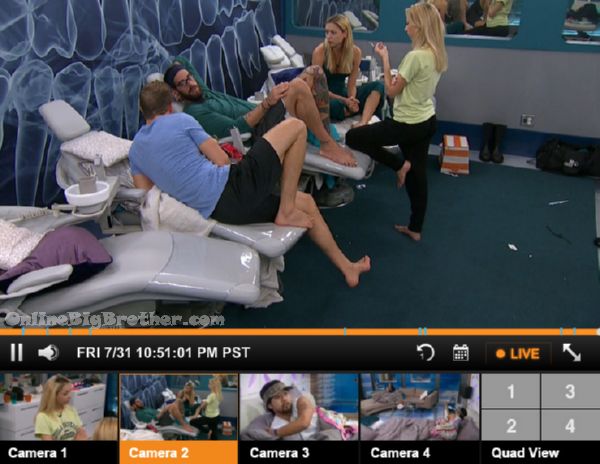 11:01pm Austin and the twins
Austin makes sure they know they can’t throw the veto if they are picked. They need to hold the veto power because if the veto is played they will go up. (I think the twins finally understands)
They start giggling and having fun. Austin says the room has evil spirits in it from Audrey. Julia pulls out a voodoo doll
Julia – dude what is this is this some voodoo doll that Audrey made 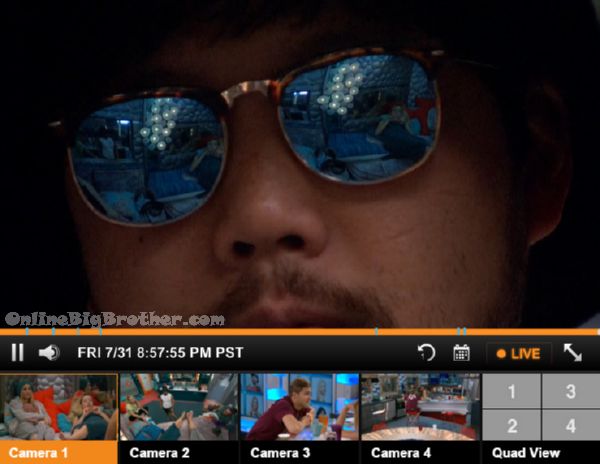 9:15pm Liz and James
Liz says they have his back with the vote.
James – I want to vote Shelli out if she gets stuck up there if she’s not than Clay either one of them has got to go
Liz thinks Shelli is more dangerous says Clay will have no one and will be easier to work with,.
James says Shelli and Clay were trying to get the twins up 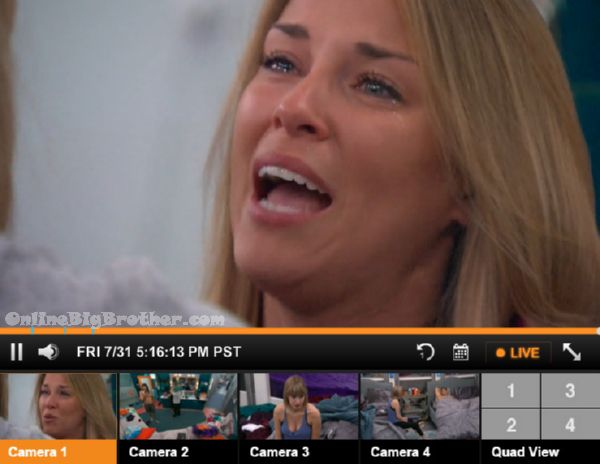 5:12pm Bedroom Vanessa, Austin and Shelli
Austin is telling her if one of them wins PIOV they have his vote.
Austin – You do have my vote.. but what am I going to do if it’s liz
Shelli – AUSTIN you staying is what put us in this position
Austin wonders if there is something they can do to flip this
Shelli – that’s up to you because apparently you’re working with him 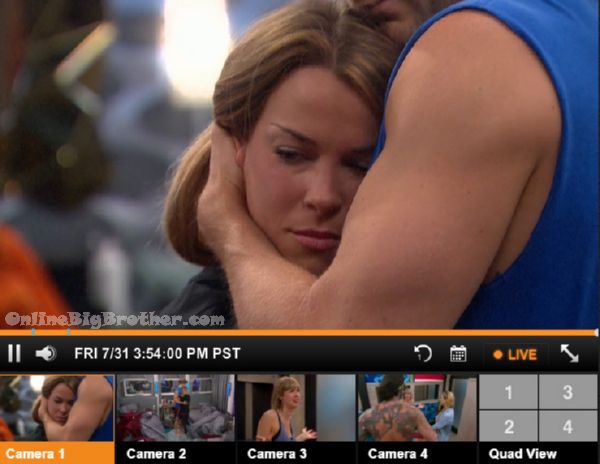 3:54pm Clay and Shelli
Shelli – he’s a piece of shit (James?)
Shelli – here’s what we’re going to do we gotta get Austin up and come clean to Meg
Shelli – we know that James is easy to be persuaded.
Shelli is going to try to shift the target onto Austin. 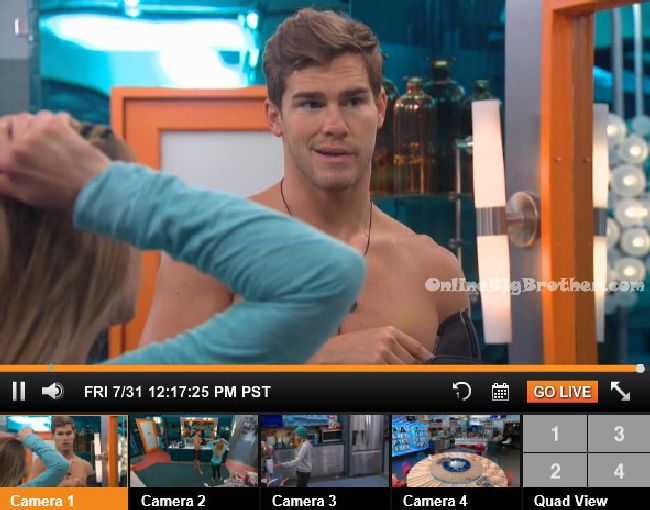 12:15pm In the bathroom room – Vanessa talks to Clay. She asks so you have no idea who is being put up? Clay says no. Vanessa says but you guys talked to him for a long time, how do you have no idea. Clay says he wasn’t saying a whole lot. He said he might put up Steve. Whether I trust him, I don’t know. He never said I am going to put up these two people. Vanessa asks can you give me your word that you never threw me under the bus? Clay says Vanessa! Vanessa says I’m trusting you. Clay says we would never throw you under the bus. We made sure he wasn’t going to put you up. Vanessa says okay because that’s what I did also! 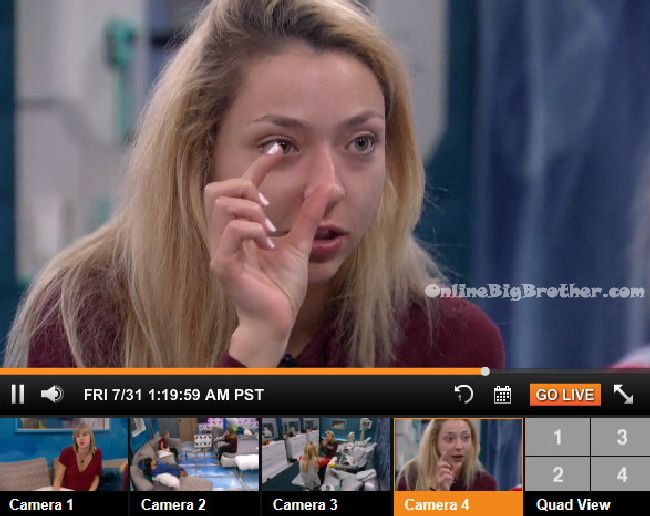 1:15am Havenot room – Julia tells Liz I didn’t want to say this but I think Austin is going to go before us. So stop worrying about it. Liz says this is what we have to say – Look James we have nothing to hide any more. We’re twins and we think we’re going to have such a big opportunity after the show to make something of ourselves. So we’re not here for the money. We’re here for the notoriety. We just want to get to jury and then we’re 100% okay. So let us know what we need to do to save you if you keep us. That’s two votes on your side and we will do anything to stay here until at least jury. What do you think about that? Julia says I like it. Liz says I don’t know if he will bring up the fact that I put him up. 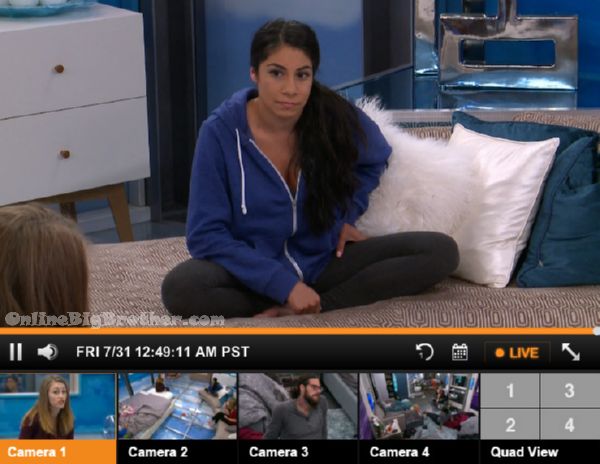 12:45am Meg, James, Jackie and Becky HOH
They’re Pissed..
Becky there’s the whole trifecta right now.. there’s us as a group, Shelli and Vanessa as a group.
Feeds cut
When we come back..
Becky has pulled out the candies to use as aids in explain her strategy
Becky says she’s been quiet about this until now because her ass would have been sent home. 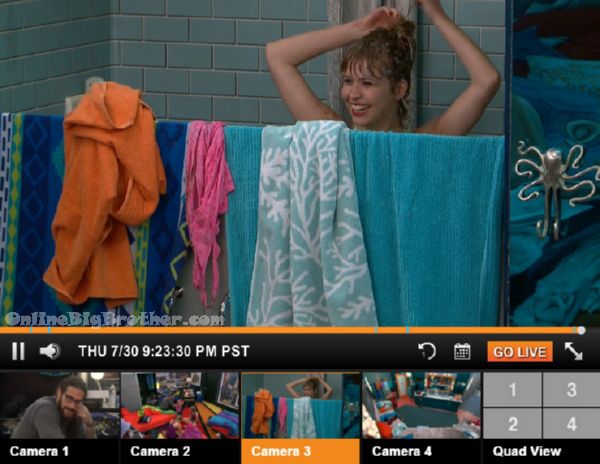 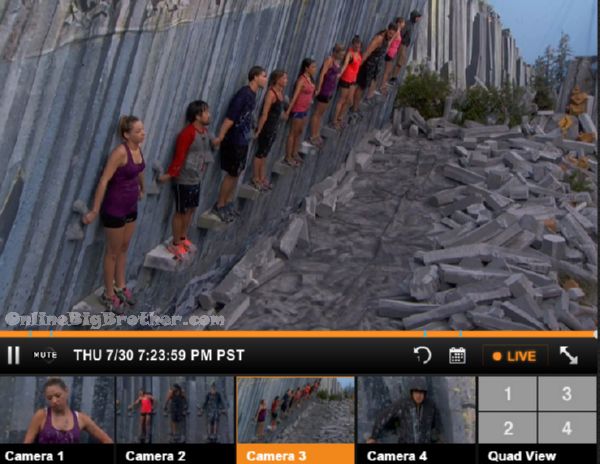 Endurance competitions is on the feeds try them free for 1 week TRY the Big Brother 17 Live Feeds FREE for 1 WEEK: Click here to ensure your live feed subscription supports OnlineBigBrother.com at no extra cost to you. 7:20pm Everyone still holding on. Periodically they get sprayed by paint and hit by birds. Becky […] 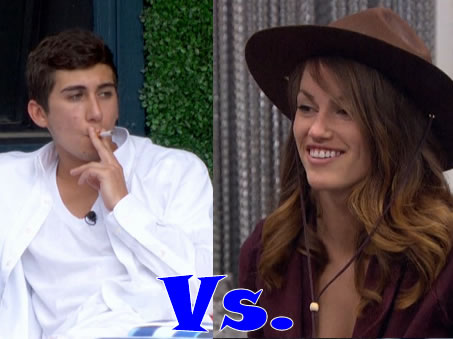 Some drama from the week before influenced the early nominations plans but in the end Shelli, Clay, Austin, LIz and Vanessa stuck true to the 6th sense alliance. In detail The week starts with Jackie and Vanessa winning the HOH. Austin had a heart to heart with Jason. Or how he would put it an […] 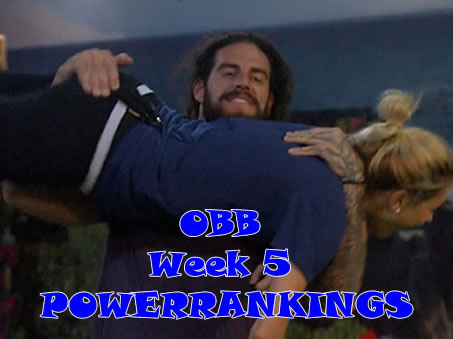 The general trend is a weakening of everyone’s game, this week got messy. After the Jason blindside a lot of interesting power shifts occurred. Basically the lion share of the blame for the blindside fell on Shelli and Clay making them a major target for the one side of the house. Whether that side can […] 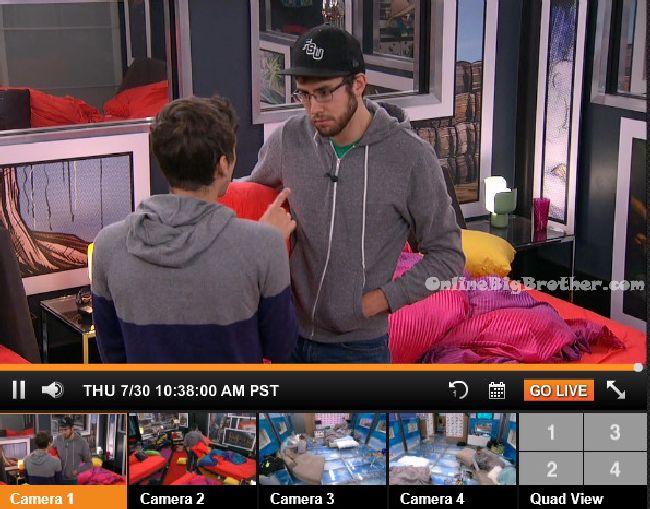 In the bathroom – Clay tells Becky you’re worried because of what you saw last night? (Jason talking to Clay and Shelli in the havenot room) Clay tells her not to worry about that. You’re okay.

10:35am In the bedroom – Jason talks to Steve in the comic bedroom. Jason says I don’t need your vote at this point because I know I don’t have them. Becky is going to target you next week against Austin so that she can flush out you and Austin will keep you to stay. And then she wants to put up Clelli during the double eviction. I told Clelli this last night .. the only real ammo I have.