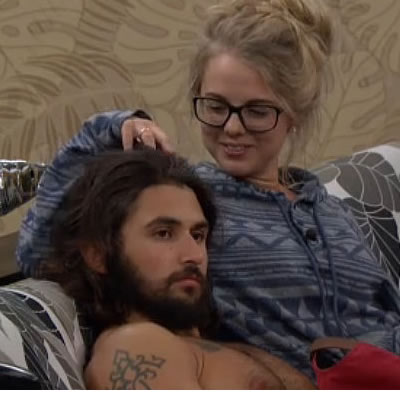 They don’t think Corey has enough time to explains himself during the double they have to figure it out tonight and have everything ready to say.
Nicole is worried if he gives her 5grand it’ll look bad to the fans, “Does that look selfish”
Corey says the 5 grand could crush their game.
Nicole says if he gives her the bribe it’s a move to have no blood on their hands.
Corey brings up how production keeps calling him into the DR to find out what he’s doing with the 5 grand. 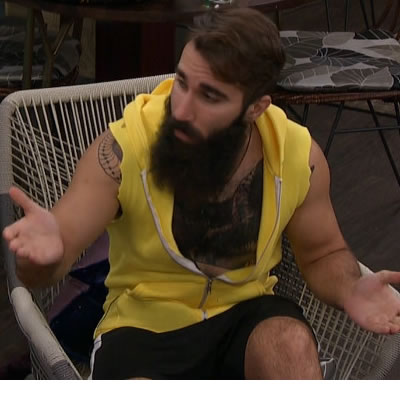 Paul – I honestly think you shouldn’t tell them the more they are question marking the better it is..
Victor – do what he did to us.. I don’t know..
Paul – they are like the only way Paul can stay is if it’s a tie and that’s IF Nicole decides to keep him.. So f*** me..
Paul – I would rather have them be like F*** than them know what’s happening.. Why tell them..
Nicole – OK 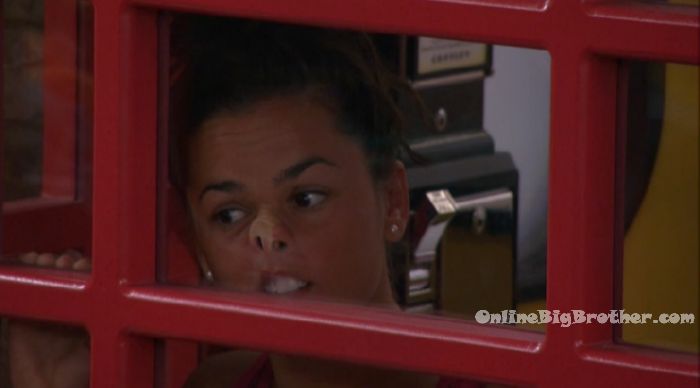 12am London bedroom – Meech is studying the days and events of the house. Nat stops her and listen to this, I just figure this out. When Paul won HOH who did he put Paulie up and who else? Meech says Paulie and Bridgette. Nat says why would they put Paulie up if they weren’t going to backdoor someone. Meech says that’s true. Nat says they threw .. like everyone made sure that Paulie got the veto. Meech says I wish I didn’t tell anyone, anything. Nat says if I win I’m not putting you up no matter what. 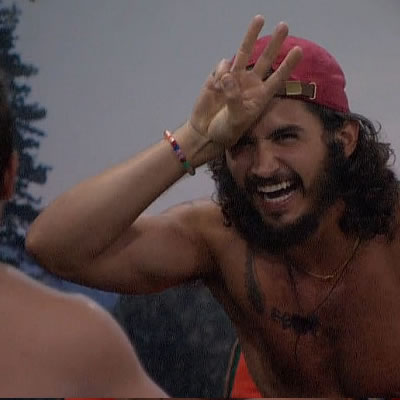 They both feel good about being “on top of the situation”
Nicole thinks James and Natalie aren’t talking to her because they know Michelle is going and they’re going to play dumb.
Victor and Corey having done their pool game sit with them.. They go over the reasons why James, Natalie and Michelle haven’t talked to anyone for votes.
They agree their (James/nat) votes don’t matter and if they all vote Meech out they’ll lose a bit of Respect for James and Natalie. . 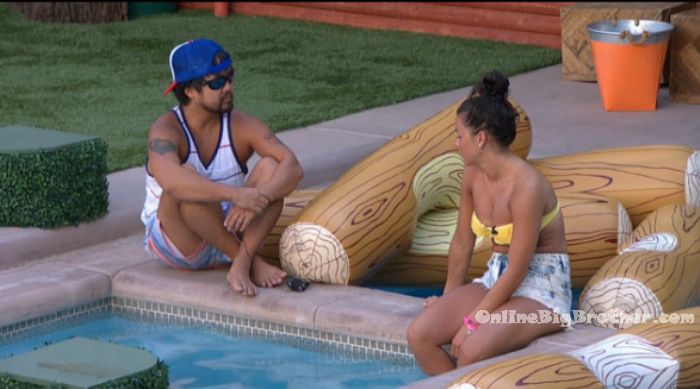 5:15pm James and Nat are by the hot tub. Nat says I’m just scared that like people made me feel like such sh*t in this house and what if I leave and I’m portrayed as a villain. As a bad person and that people hate me outside the house. I literally put myself in a situation that I got sh*t on and I’m afraid I’m going to get sh*t on the outside. James says you’re not portrayed as a villain. 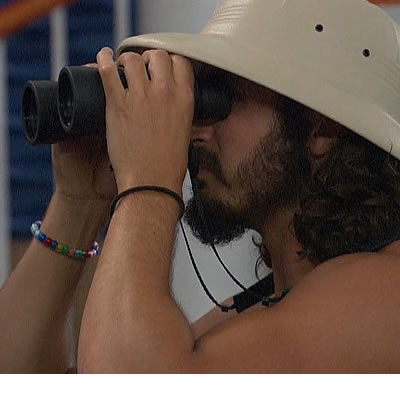 “there he is that is the one they call Paul he is the crazy creature nin the BB nature watch.. he’s biting his nails he’s in the presence of James which is one of his nemesis. He’s dormant in the day and active at night. He’s a night species.. He’s what the BB nature watch like to call playing nice.. he has a distaste for James and Natalie for they have wronged him in the past.. ”
“It’s fascinating to see all three of those creatures hanging around the water.. oh my gosh.. he plays with his beard that is a sign of anger.” 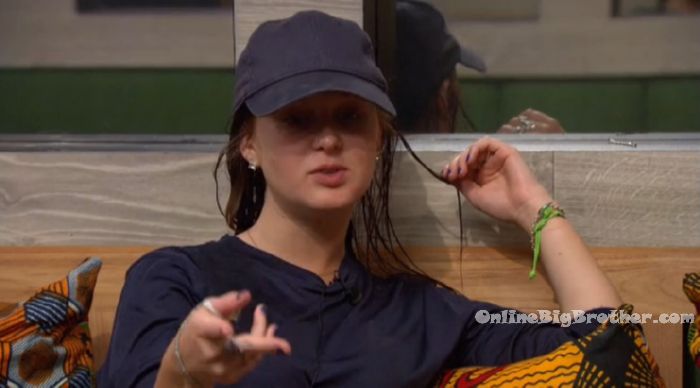 12am Hot Tub – Meech, James and Nat. James says there’s only 23 days left. Meech says its comparable to how long it was from move in to when Vic first went home in the tennis comp. Meech asks James how many fan emails he gets a day. James says 5-10 a day. James asks so if we win do we put up Nicole up and Corey or Victor. Meech says Nicole and Victor. James says if Victor wins sorry Corey you go up. Nat tells Meech she needs to win this HOH. 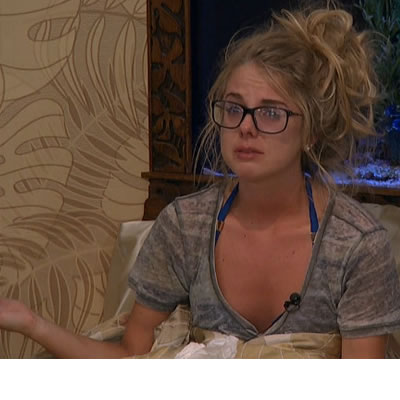 They laugh
Corey – fools emotional
Nic – I am
Corey – I know what you’re saying but be grateful for getting this far.. You are in a good spot stay positive about it.. You know try not to be sketchy be happy.
Corey tells her not to bring negative attention to herself
Nicole – I’m not COREYyyyyyyyyyyyyyyyyyyyyyyyyyyyyyyyyyyyyyyyy 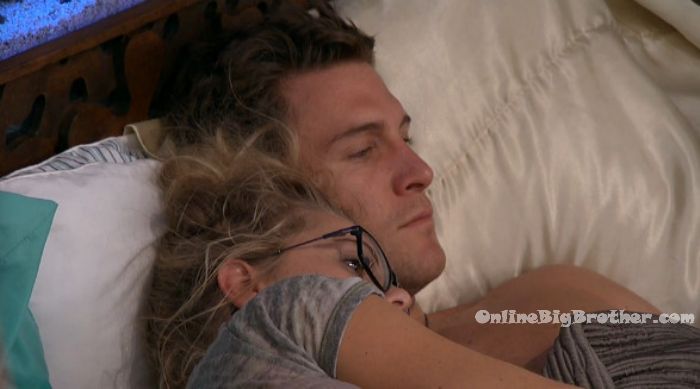 5:10pm In the kitchen – James is telling Vic and Corey all about what its like when they get out. He says its overwhelming. At the wrap party everyone is coming up to you with their phones and guess what they want. Pictures. Once you get your phone back you’ll be on it till 5am. When I got back to my hotel room I was just like a girl on my phone. The conversation turns to talking about BB Bribe. James says if he hadn’t won the 5G’s it wouldn’t temp him to drop out of the HOH for the bb Bribe 5G’s. 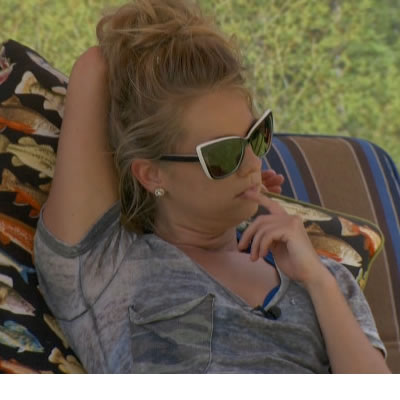 1:00pm Backyard Corey and Nicole
Corey – thoughts on the bribe do I use it on Vic… He’s acting like he would never vote him out (Paul)
Nicole – he’s very happy today I kept him off the block.. He said the deal is sealed.. 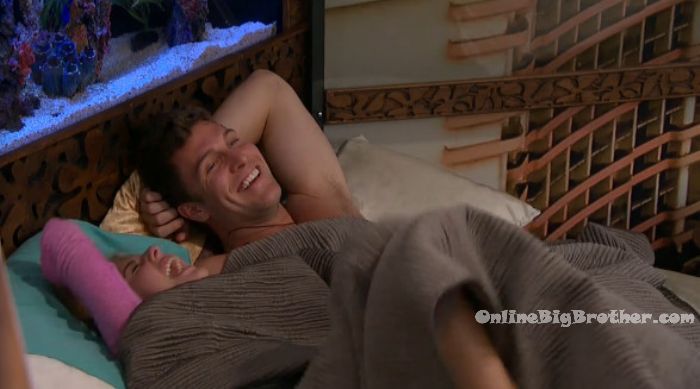 7:50pm Paul, Vic and Nicole are talking. Paul is talking about his Dead Scull apparel and how before coming in here he invested all his money into it. Nicole asks him about his best selling shirts. Nicole tells him that she will definitely post his video on her social media. Paul says he will continue doing it until people stop buying it. 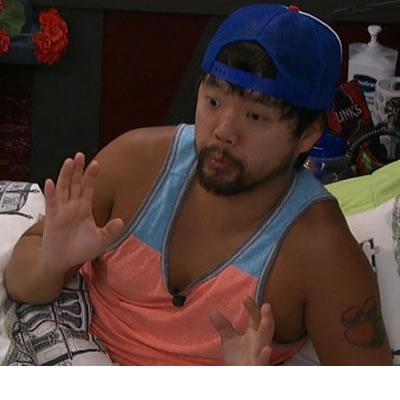 3:30pm London Natalie, Michelle and James
Natalie – they said it had dark hair..
Michelle – so I have dark hair..

Natalie says no one talks game with her anymore.
James says he does.