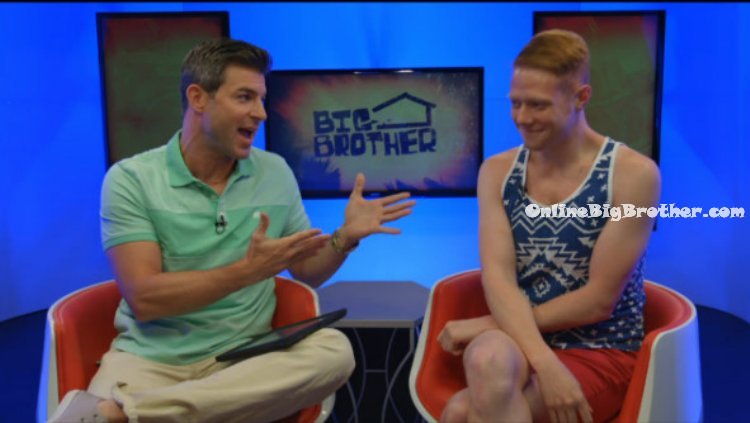 – we are now treated to our fifth “Winners Tell All” Live Chat event hosted by Jeff Schroeder. If you missed the first three “Winners Tell All” Live Chats they’re available on the live feeds to re-watch or you can read our summary of the Hayden Moss, Jordan Lloyd, Rachel Reilly and Ian Terry live chats. As with the other live chats this event is also hosted by former big brother house guest and fan favorite Jeff Schroeder who is interviewing Big Brother 15, Andy Herren. Jeff says that this is the last Winner’s Tell All live Chat.

DON’T FORGET there is ONLY 1 DAY left to save 20% off the Live Feeds!
Save 20% if you sign up for the Big Brother Live Feeds before June 26th!

Jeff introduces Andy and he talks about what he’s been up to since winning big brother 15. He asks Andy what its like to be back in the big brother world. Andy says its weird but good! Jeff points out that Andy got a tattoo on his arm of a big brother key. Jeff says that if he won he would get one too. Andy says that he did some travelling to Australia, Canada and plans to go to Europe. He says that he would much rather have experiences than things in life. Jeff asks him if he still has his kitten shirt? Andy says no he sold it to donate the money to Britney Haynes Charity when her baby had cancer. Andy talks about his experience on Big Brother 15. He says the best strategy for big brother is being able to adapt and that’s why he won because he was the best at adapting. Andy talks about how he would plant ideas into peoples heads so that those people would be the aggressor and do the work for him. He says they would then be targeted but he would stay under the radar. Andy comments on how he made sure he was in every conversation and had tabs on everyone. Jeff says he noticed that and wondered how many Andy’s were in the house. Andy says that he knew he had won big brother when he won the 2nd part of the final HOH.

How do you feel about your season being the most controversial? Andy says that there were a lot of things said that weren’t good but I also feel that we were made out to all be bigots and racists. He hated how reporters would ask him how it felt to live in a house with racists and bigots.. and Andy says it wasn’t like that at all. It’s all about context. He says that some of the house guests would joke around but never meant any harm. He says that only Aaryn said things about gays but that she didn’t say it to his face. Jeff asks who he still keeps in contact with from his season? Andy says that he hasn’t talked to Howard since the show ended but that he doesn’t talk to anyone. Andy says he talks to everyone with the exception of one person but I won’t say their name.

What could people learn about your game? Andy says survival of the fittest. Get in there and learn your role to adapt.

Jeff tells Andy thanks for joining him. He says that Andy will be back tomorrow night for the live kick off event. 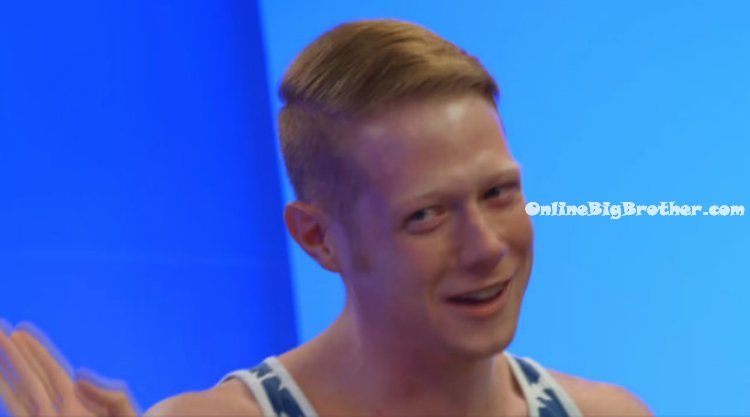 God… and I thought I couldn’t hate a winner more than Adam from season 9… there’s no such thing as a “Strategic Floater”, you’re just a floater who went back and forth with the house.

If you paid close attention to the feeds, Andy was on board or behind every single eviction. He was always on the right side of the vote and was the deciding factor in pivotal evictions like Nick’s eviction, Helen’s eviction, Amanda’s eviction… I mean, if you don’t want to like him fine, but saying Andy wasn’t strategic is just false.

I agree , Like him or not he did some serious damage to his foes and pulled off some crafty game play last year.

Total crap. He might have known what every vote was going to be but he didn’t decide who was nominated and evicted. McCranda did. Even Andy’s own HoH. He didn’t control anyone’s vote. He did manipulate anyone’s vote. He just cowardly sat in the corner while all the big hitters took each other out.

Andy gets such a bad rap amongst the fans. No I wasn’t rooting for him, no I’m not a huge fan of his but can we give the man credit where credit is due. He played a very good game last summer and deserved the win over any other player there.
Yes he was a big time rat, but that was a big part of his strategy and it worked, nobody sniffed him out and he always had a “bigger threat” to hide behind. That’s great game play if I’ve ever seen it whether it was pleasing to the viewer or not.

As much as I don’t like the guy, of the final two, hell final 3 and 4 he played the best game.

So let me get this right, You’re comparing him to the worst bunch of floater losers ever to get to the end stages of a BB. Yes he was the best of a terrible bunch.

I have been trying all day to get the live feeds with no luck. I tried going thru Simon’s site and CBS but after putting in the info it freezes up.
Is anyone else having this problem?

I signed up on Sunday and it worked. I know some people have signed up today using our links. Maybe try the following
1) reboot
2) change browser
3) Flush browser cache

Thanks for trying to buy your feeds through us much appreciated. Send me a email if it still give you trouble simon.onlinebigbrother@gmail.com

Andy says he talks to everyone with the exception of one person but he won’t say their name. Let me guess …Elissa?? If it looks like a rat, smells like a rat, sounds like a rat, and acts like a rat, Andy it still a rat? Although a rich sneaky RAT!

Andy and Elissa are friends now… The person he doesn’t talk to is most certainly Nick – Andy didn’t like him inside the house and outside the house he’s kind of an annoying douchebag.

Can’t stand the rat; has to be one of the most loathed contestants ever!!! Blech!

I don’t like Andy but I would have had a hard time rooting for GM or that fat fuck Spencer to win. I can’t believe that Spencer has such a high profile (his girlfriend too), being an arm chair commentator. The final three were all floaters. Plus that idiot McCrae! Why in the world would anyone be interested in anything he has to say? He threw his game away for a piece of ass! For me, if they screw up his season, the franchise will be pretty much over, nothing lasts forever, ask the Kardashians.