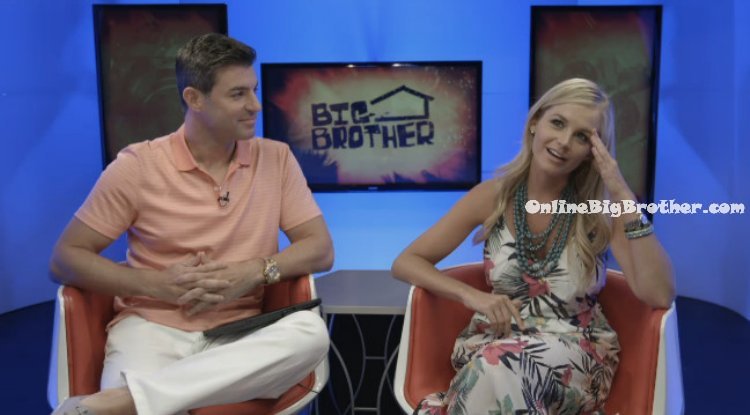 – we are now treated to our second “Winners Tell All” Live Chat event hosted by Jeff Schroeder. If you missed the first “Winners Tell All” Live Chat it is available on the live feeds to re-watch or you can read our summary of the Hayden Moss Live Chat. Today former big brother house guest and fan favorite Jeff Schroeder is interviewing his girlfriend and Big Brother 11 winner, Jordan Lloyd. If you didn’t already know Jeff and Jordan met and fell in love on Big Brother 11 and are still going strong breaking the showmance curse. Everyone including Jordan has been waiting for Jeff to pop the question and a part of me wondered if he might do that today during the live chat.

The live chat event begins with Jeff introducing Jordan as his all time favorite Big Brother player. He tells her he loves her. Jeff asks her what she’s been up to this last year. Jordan says that she is just about finished up cosmetology school. Jordan says that she moved back home because she just wasn’t read for LA but says she is moving back soon. Jeff jokes that she could be the make-up artist in the house now that she has her degree. Jeff asks her how she got on to big brother for season 11. Jordan says that she was asked to come audition and showed up in sweats and flip flops while everyone else was dressed for the club. Jordan wondered what she was doing there. Jordan talks about how she was in the house is how she really is in real life. Jordan says that her strategy was to team up with Jeff the nice guy and thought if she went home she was fine with it since she could see her family.

Jeff asks Jordan if she has any advice for the new Big Brother 16 cast? Jordan she isn’t sure. She says that having someone that was loyal have her back was what helped her. She says find someone loyal that won’t back stab you.

Jeff says that they NEXT “Winners Tell All” Live Chat will be on Monday, June 16th with RACHEL REILLY! House Guest on Big Brother 12 and winner of Big Brother 13.

Great to see Rachel is the next winners tell all. Means she is definitely not sequestered as the rest apparently are already. Sweeeeeet. I just could not to another season with Rachel.

soooo jeff yells at jordan, eh? and didn’t he say something homophobic on his season? im really over jeff being the interviewer for cbs. he is really not that great at it and still seems to know nothing about big brother even tho he was on the show twice… i know he has lots of fans… im glad u guys are recapping this interviews bc i wont be watching them.

I always liked Jordan but I think Jeff had a lot to do with her win.

so what’s the deal with Jeff and Jordan? “beating the showmance curse”… they moved in together years ago, he kept on promising he was about to propose real soon… for years, and now she moved back home. How is this showmance not completely fake and only for media purposes?