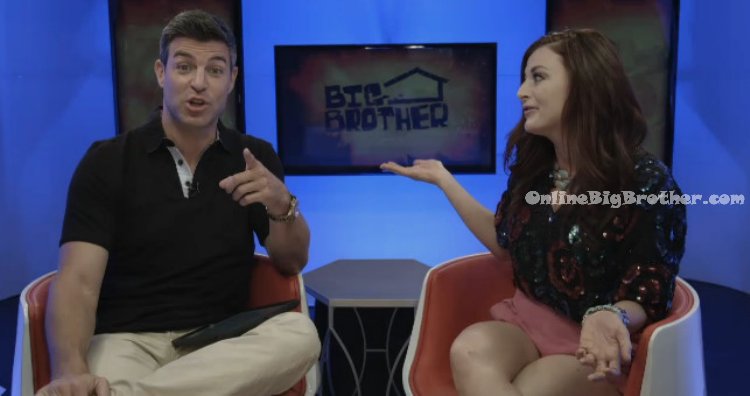 – we are now treated to our third “Winners Tell All” Live Chat event hosted by Jeff Schroeder. If you missed the first two “Winners Tell All” Live Chats they’re available on the live feeds to re-watch or you can read our summary of the Hayden Moss and Jordan Lloyd live chats. As with the other live chats this event is also hosted by former big brother house guest and fan favorite Jeff Schroeder who is interviewing Big Brother 12 house guest and Big Brother 13 winner, Rachel Reilly.

The live chat begins with Jeff introducing Rachel Reilly and chatting with her about what she’s been up to lately. Rachel says that her and Brendon might Big Brother 16… you never know. Jeff and Rachel talk about the season they were on and the events played out. Jeff asks Rachel at what point did she feel that she had Big Brother 13 in the bag. Rachel says she didn’t until she won the last HOH. Rachel explains why she chose Porsche over Adam because she deserved to be there and was winning competitions. Jeff says that if he had been in Rachel’s situation he probably would have taken Adam because you don’t want to chance the other person winning. Jeff says looking forward to Big Brother 16 do you think anyone you know will be on it? Rachel says that she hopes Ian or Frank will be on it. She thinks it will be a good chance to see some returning players. She says a Two-Night Première is huge! Jeff asks if Rachel will help live tweet with him during his 16 hour tweet marathon after the première. Rachel says that she will help for an hour. Rachel they volunteers Brendon for an hour or two. Rachel talks about her show Reality Relapse.

Jeff says that this Thursday he will be doing the NEXT “Winners Tell All” Live Chat with Big Brother 14 winner Ian Terry. Subscribe below to the live feeds now to watch and send in your live chat questions to Ian:

I really hope Rachael doesn’t come back this year. Enough already. If it’s All Stars, my early vote is for Matt Hoffman, diabolical super genius

I wish the fans had a vote on eviction night.