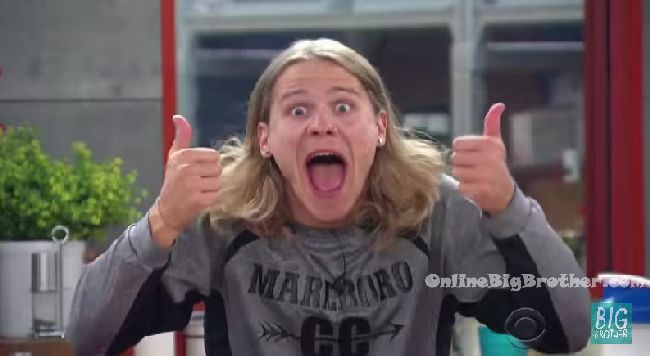 In just 2 weeks the first of the two night première airs on Wednesday, June 24th at 8pm on CBS. The second episode of the two night première will air on Thursday, June 25th at 8pm. Leading up to the première there will be two live feed exclusive VIP chats with the first being today with Big Brother 16 winner Derrick Levasseur and the second chat will be held on June 15th with Frankie Grande. The exclusive chat session today was a joke in my opinion as it wasn’t a video chat with questions like last season 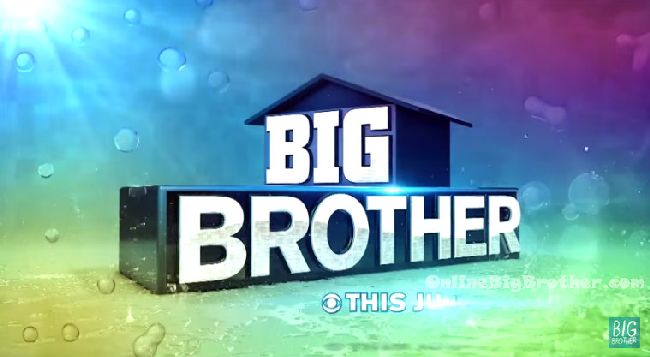 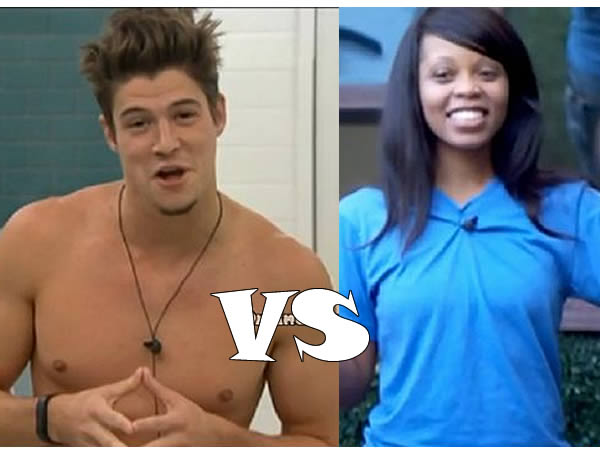 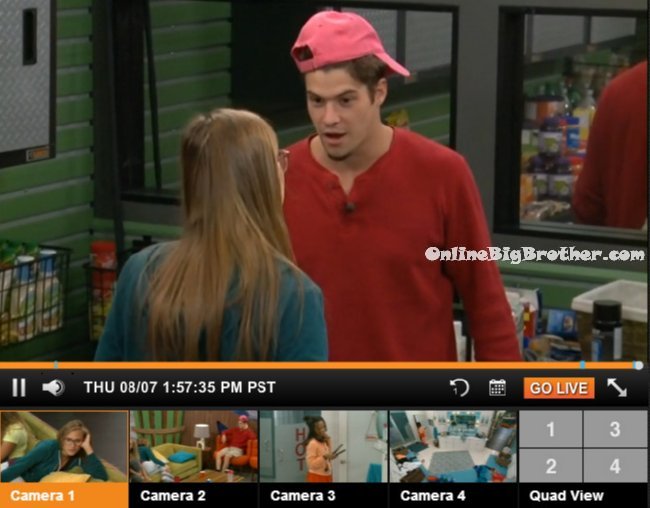 Hayden and Donny are in the kitchen. In the bathroom Victoria, Derrick and Nicole are getting ready. Nicole asks Zach how he’s doing? Zach says fine! Derrick and Zach head into the storage room. Zach says f**King Hayden and Nicole! I’m so pissed! Derrick tells Zach that he can’t let them on to him knowing. Derrick reassures Zach that he’s safe. Zach asks again if he is staying. Zach wonders if he should talk to Vic before Derrick does. Derrick says you’re on the block, of course he should campaign. Derrick tells him not to let on that he knows anything. 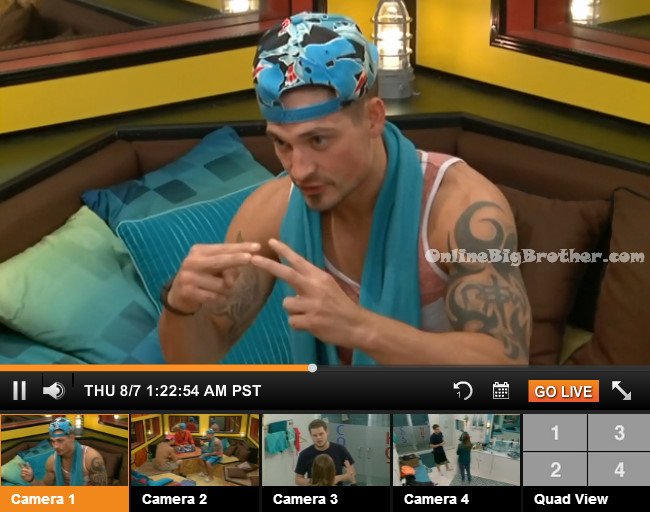 12:45am In the living room – Caleb, Derrick, Cody, and Frankie are talking. They’re talking random things. Caleb starts talking about wanting to do survivor. Frankie says I would only do it if Caleb was on my tribe. Derrich says he was mortified last season when they killed a chicken with his bare hands. Caleb says when they heard I killed that wild hog with a stick they were like… Big Brother blocks the feeds. Caleb says as soon as I get out I’m going to tell them to put me on the next season of survivor. Zach joins them and practices his speech. 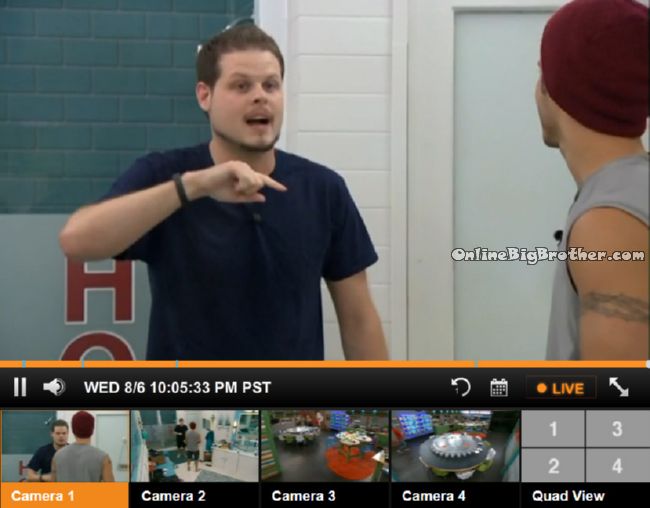 10:01pm Bathroom Cody and Christine
Derrick – I have to talk to you .. we have to draw the line I will draw the line tonight..
Derrick – Frankie is trying to protect Nicole and Hayden because he thinks they are with him.
Derrick wanted to tell Frankie that Nicole and hayden were planning on backdooring him.
Derrick – you think he’s going to work with them after that.. of course he isn’t
Cody – I just sh1t my pants
Derrick we have to talk tonight and look each other in the eyes and decide what decision we’re going..
Derrick says Nicole was pushing him :”Zach has to go he has to go” .. “Why does he have to go Nicole he’s not putting me and Cody up” 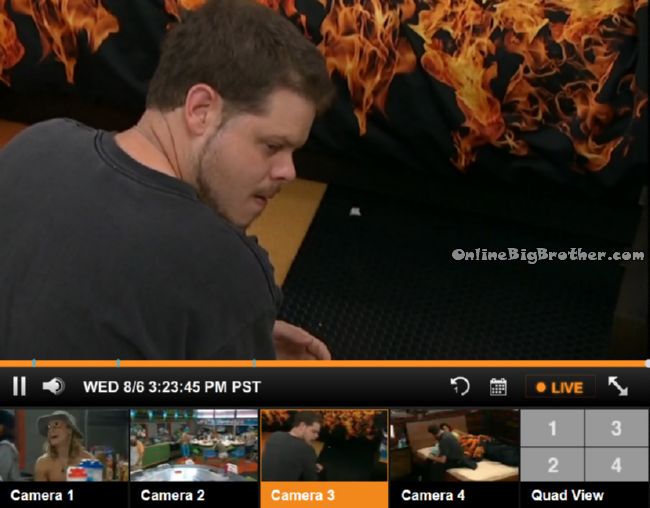 3:23pm Fireroom Derrick and Victoria
Victoria wants to know why he never told her Zach was saying things about here.
Derrick – I just defended you because it was the right thing to do.. it wasn’t game..
Victoria – what did you say
Derrick explains that Zach was asking him something along the lines “why are you close to her” “How can you stand her” (Derrick doesn’t want to reveal too much of the conversation)
Derrick snapped at Zach said “I’m not a scum bag i’m not disrespectful to women” 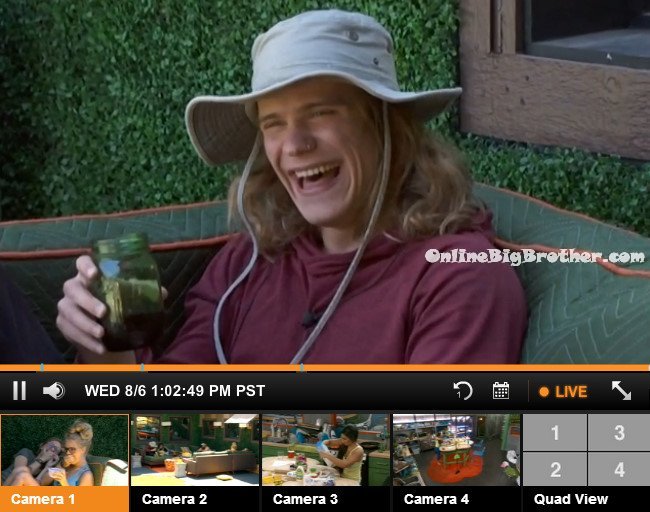 12:55pm – 1:20pm Hayden, Jocasta, Victoria, Donny, Nicole and Christine are out on the backyard couches. They’re talking about random things. Hayden talks about the tattoo suicide girls. Christine says that he husband Tim wants a tattoo of Bill Cosby. Hayden says I was thinking of getting a tattoo of my face somewhere on my body. Nicole says I could see you doing that and I wouldn’t even think twice about it. They continue to talk about tattoos. Hayden says I have 7 tattoos and 3 of them aren’t jokes. Hayden says that his Instagram and Twitter accounts have been reported and suspended a number of times. 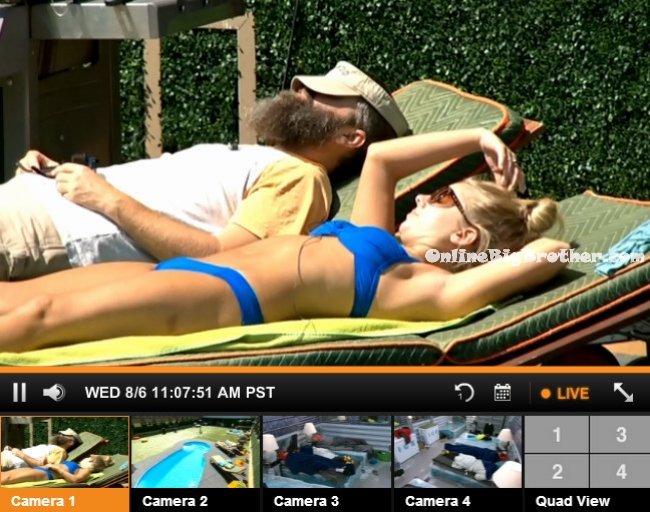 10am Big Brother wakes up the house guests. When the live feeds return – Frankie and Nicole are out in the backyard. Nicole says that she’s going to lay out in the sun. Frankie says he wishes they would let him sleep out here. Nicole tells him you just put sunglasses on Frankie! They’ll still call you out though. Frankie heads back to bed in the havenot room. Nicole goes to the HOH room to change. Donny comes out into the backyard and gets on the elliptical. Nicole comes out and lays out on the lounger to suntan. 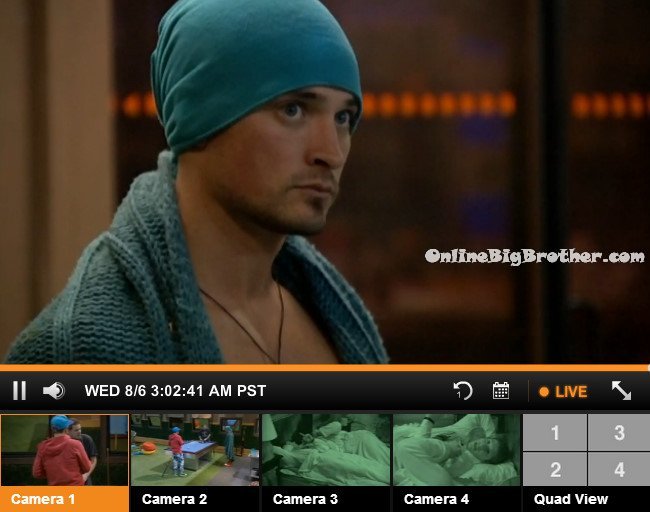 12:40am Up in the HOH room Hayden tells Nicole that he has a present for her. Hayden then leans in to kiss her . Nicole tells him No, Hayden!! Hayden then kisses Nicole’s forehead and then tries to kiss her again. Nicole denies him again. Hayden says she acts like it never will happen again. Nicole says it won’t! She tells him it shouldn’t have happened. Nicole tells him that she liked kissing him. Hayden says I love the 2 minutes of cuddling I sneak in with you. Nicole says I’m a good cuddler! Hayden says I’m also a good kisser. 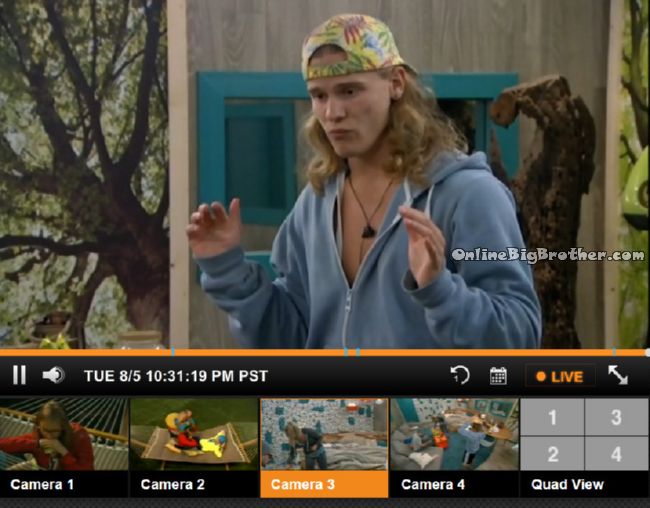 10:14pm HOH Hayden and Nicole
Hyden draws the parallels between this week and last week. Caleb thought Amber was going home and he was the mastermind last week and this week Frankie thinks he’s the mastermind but it
Hayden – It’s hilarious He’s the one thinking he’s orchestrating the whole thing like Caleb did last week
Nicole says it makes her feel good that Christine and Frankie don’t know they are working with Derrick and Cody. Hayden thinks Christine suspects something is up. 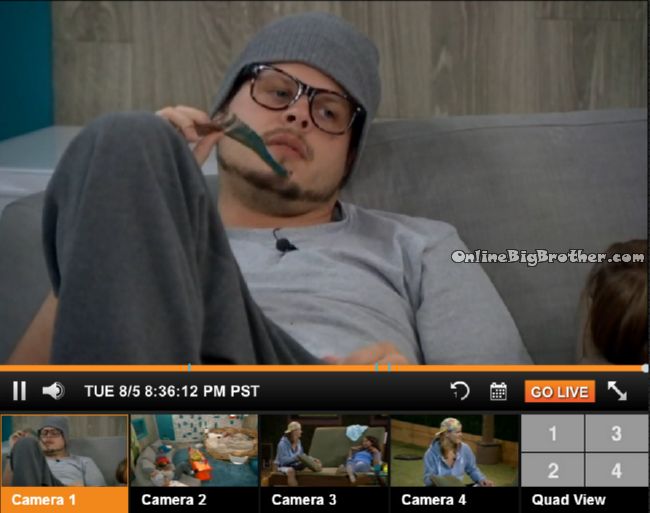 8:35pm HOH Derrick, Cody, Nicole and Christine
Chit chat about what Derrick really does. Derrick mentions that Frankie said he thought he was a cop
Christine – I don’t think you are a cop you’re too cool
Derick – thanks another insult.. cops can be cool
Christine – I have a bitter taste in my mouth
Derrick says he’s gotten more tickets that Christine , Christine says she’s been pulled over 7 times but never got a ticket.