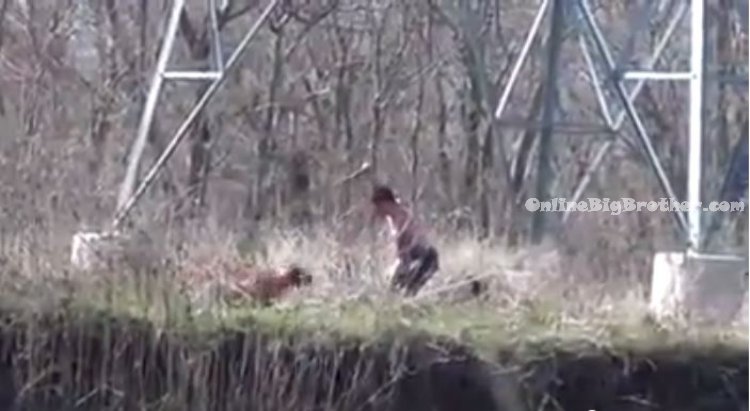 The all new cast of Big Brother 16 was just released yesterday and as usual there is a lot of information surfacing about each one of the new house guests. One of the house guests, Caleb Reynolds who grew up in Texas and now lives in Hopkinsville, Kentucky is an avid outdoors man and hunter. He lists his favorite activities as horseback riding, rock climbing, going to the gym, riding bikes, hunting and fishing. Given that he’s an avid hunter, it comes as no surprise that a video surfaced showing him kill a wild boar with a stick. In the video he is with his dogs and a friend on the side of a river bank. The dogs on the other side of the river bank have a wild boar cornered, so Caleb dives into the river and swims across to the other side. When he reaches the other side he yells back to his friend that he forgot to bring a knife. He then walks over to the wild boar, picks up a stick and drags the animal out into the open at which point he drives the stick through the wild boars heart killing it. His friend says “That’s how it goes extreme style! He’s driving a stake through its heart! That’s how we do it here in Texas! Improvise!”

Caleb holding and joking around with a frozen dead coyote:

Not that he shouldn’t have, but I think he should have auditioned for Survivor o.o

He did apply. He was redirected over to Big Brother. He’s only on this season because the producers put him on BB even though it was Survivor he applied for.

does anyone know when the hg’s enter the house?

The house guests will likely be entering this house this Saturday, June 21st.

Can’t wait for a new season to start.

I liked the old layout to this site better though 🙁

Love the new website,great job guys! Can’t wait for this season to start especially cause we get the live feeds in canada again! (Subscribed through your website,cheers!!)

Thanks Danny02 much appreciated 🙂

5 days to go and we got all new people Hooray!

hey dawg, was just wondering when do the houseguests actually move in the house??? Plz reply thanks xx

Dawg’s reply from earlier today “The house guests will likely be entering this house this Saturday, June 21st.”

Hey Simon & Dawg. You guys ready for a new season.
Let’s hope they have some cool twist this season.

We’re definitely ready and excited for it to start! We can’t wait to watch the new cast on the HD live feeds … its going to be a great season! Let the 90 day marathon begin 🙂

Loving your new format and looking forward to another great summer hanging out with you guys.

Glad you love the new look of the site! We can’t wait for it to start… this is going to be another great summer of BB! Thanks for coming back!!

Dont know if anyone saw his Racist an Homophobic comments yet.

This is america, so people are allowed to have their own beliefs, even if we don’t agree with them, or even if they are ignorant and/or unkind. Animal cruelty, on the other hand, is against the law. I’m grossed-out that CBS cast this person.

Just got done watching the video of Caleb with Reality Relapse & Rachel Reilly! So from his upbringing, being split from his mom & 2 other brothers at age 11, then when he got old enough the judge said he could choose to live with what parent he chooses. He chose to leave Dallas, from his dad and go back home to Kentucky with his next older brother to be a family of 4 brothers again. Then graduated, then off to Iraq to become a prison guard! ( I just watched a movie called Boys of Abu Ghraib a couple a wks ago ) Way too much of a coincidence ! This is history repeating itself so many times. They take our young boys, say they are men, and put them front lines! Nope, I will never get used to it! I know way too many people who are Not the same after returning from overseas 🙁 This better Not be for Ratings!!! 🙁