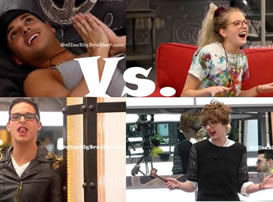 Summary of the week in the #BBCAN3 house

Spoilers from the show

Evicted houseguest is  Johnny
HOH winner is Zach
Have nots are Godfrey, Bruno, Sarah and Jordan 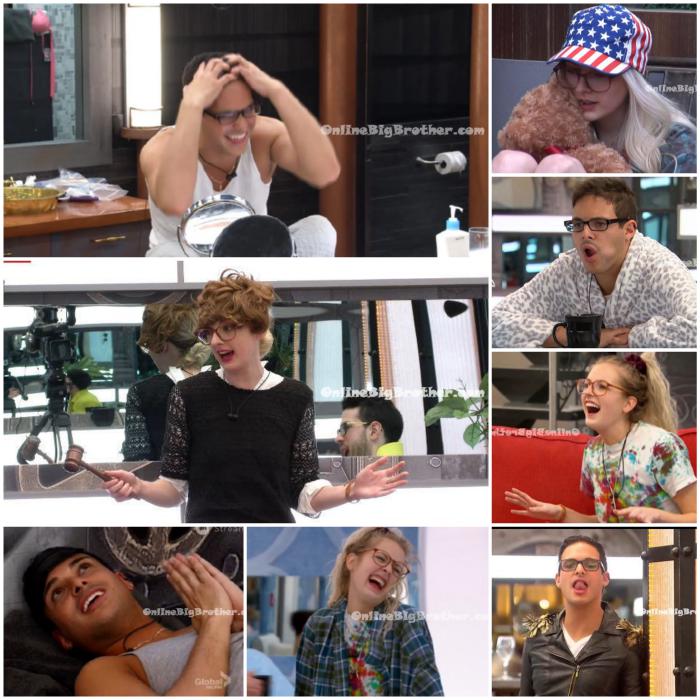 If Zach one the HOH we finally get to see him talk some game..

Considering hes aligned with pretty much everyone in the house…there is going to be some angry people…lines will be drawn…one half of the house will be mad and they will see him as a threat and feel betrayed…the fall of Zach could potentially begin soon…btw, when does the returnee come back…

Arisa never said but the comp to see who’ll come back is on Sunday night.

ugh. if the spoiler is right my feeling of dread / pilar moment about z/j or k winning hoh came true.
there’s going to be so much ego the house might explode.

Did the evicted houseguest come back or is that not this week? Johnny would be the fifth person, correct?

I’m hoping that after this week, the next HOH comp is just out of the first 5 evicted and they have to nominate immediately so that “Newport” can’t brainwash anyone. I can see everyone other than Naeha being easily swayed by Zack and jp.

I love Newport but I only see one of them going far, everyone will go after Zach and Kevin before Jp, Jp will go to the end with Sarah. I had a pilar moment and saw it earlier today so I figure I would tell you guys so when it comes true, I can come back to this comment to throw it in everyone faces lol

FACK OFF YA WANKER SUPPORTING THE DOUCHEPORT ALLIANCE

Once again I think I’m the minority but I’m glad that Zach [potentially] won. That way one of the meatheads is going out the door and the remaining two of them can finally, FINALLY see what slimeballs Zach and Jordan are. No matter how stupid Bobby is, there’s no escaping bloodshed if any of the meatheads go out the door. I just hope that the returnee doesn’t get targeted as soon as he/she goes back in the house, that’s the only way Zach could escape this HOH with his hand’s clean.

Anyhow happy birthday to Simon and Dawg! I do hope something crazy happens on the feed for your entertainment today. :D

Wait, when is Naeha, or the returning houseguest returning?

Bobby is such a dud that I hope Bruno somehow survives this week and lives on to get rid of half of Newport. Bobby trying to sway people to get rid of Kevin when JP/Zach run the whole show (incl. Kevin) is so whack.

On the other side of the spectrum, I dont think Newport will be able to make it to F2 anymore seeing how already people like Bruno/Godfrey/Sarah have all caught onto them. And that will only spread because they are so out in the open.

Do you think Cody’s balls will be found in the house? They disappeared last summer; maybe they travelled up there.

The Truth
Reply to  AJ

LOL! I just spit water onto my computer monitor upon reading this!

Bruno is going to really regret not using that double POV last week if he is the one to go home this week because of Zach.

Many happy returns, I hope you both have a wonderful evening XD….. There is a rumor that Zach won the head of house is that true??? Now the pantry alliance can stop whispering in the shadow and start whispering in public. If Zach won and someone returns to the house, what will stop them from voting them out, under the pretense that it’s not fair.

I’ll be watching this https://www.periscope.tv/w/VxA8GjU5OTQ3Nnw0ODc4NDc2W-PJWeq-NYIWFx9ywzMelsxUNsi6aQ3ibzhhQIbVhAc=

Pete’s commentary of the episode.

THANK GOD GODFREY. THANK YOU FOR F***** READING OUR MINDS. The regret of not getting rid of one of the bromuda triangle is just right around the corner bruno. GG

I love this site! Without I’d never know what’s going on!! Funniest post I’ve read “Graig is evicted in a shocking unexpected unanimous vote’ shocking and unexpected lol! Some of my other favorites: ‘Twist definition changes frequently fans wonder who the F*** is running this show’ ‘Jordan continues to do more podcasts last hours many people fall asleep’ ‘If Zach one the HOH we finally get to see him talk some game.’ OMG! So funny. Love the sarcasm! Thank you both for making this otherwise terrible show worth watching. And happy birthday!

All the evicted houseguests are in sequester together.. expect MAJOR comparing of notes once Johnny meets with them.

I was just thinking that! I’m glad to see they already are comparing notes & that Graig blew up the chop shop! Finally things will get interesting!

while I think they’ll compare notes… will they tell all?
naeha was close on naming graig’s alliance… will he tell her Zach was a member?
jonny spent the better of the last few days trying to destruct allies games. he left thinking if not for the mean girls, the boys would have saved him. will he still try to save kevy wevy and steer everyone after sarah, britt, godfrey, Bruno and bobby?
scindy and risha left too early to really know anything constructive.
graig really had a problem with seeing anything beyond graig imo.
it really depends on everyone’s clarity and objectivity.

For some weird reason when Arisa said that the challenge will happen on the stage the first thing that came into my mind is an eating challenge. HAHAHA. They will be presented one bucket meal of chicken each and the first person to eat it all will get the return ticket. Now that’s definitely a new competition and one that hasn’t appeared yet on the big brother franchise. :))))

I guess they will be eating FXC chicken then. They just unnecessarily finished some KXC on Tv tonight.

will there be live feeds tonight?

Sounds like Zach won it. How are the wonder twins of blatancy going to play this…

Zach will target Bruno , Bruno will get evicted in a week and will regret for the rest of his life not putting Zach and Jordan up on the block when he had the chance.

I hate how, besides After Dark, Risha was basically nonexistent in this game. She got 15 minutes of air time complaining about things and showing off her knockers. She had game in her that was cut short due to BBCan and Twistos’ obsession with screwing over anything conventional (really? a before/after comp when only 5 weeks passed). I also feel like with the current house dynamic, she would probably be the biggest wildcard to the doucheport alliance. I say wildcard because, given her nonexistent game presence, neither the viewers nor the houseguests would know what she would do so that’s neither positive nor negative.

Risha, if she avoids being nominated after she enters the house (with some sort of immunity, speculatively), could make it far.

Anyone else think ‘BBTV” and the “Search for Skillz” portions of tonight’s episode were disasters? You’ve sunk to a new low, Big Brother. It was more embarrassing than entertaining.

could it be any more disappointing. i’m not talking about Zach winning the hoh.
i’m talking about the way episodes are being edited this season.
I was disgusted with last year’s golden edit for some players. while some people are getting whatever is beyond gold in terms of editing, this goes further than that.
even with the inclusion of a time machine trip to the night of the gummy bear story (cut and pasted a lot), it still absolutely looks like nobody is on to Zach and Jordan or the diapers. closest they came was Bruno and bobby saying good thing Zach’s on our side, we can use Jordan to our benefit, and Bruno saying I don’t trust Jordan 100% in scripted d/r.
it’s not just continuity issues… it’s revisionist history. I’ve said it before, i’ll say it again. once Zach and to a lesser extent Jordan are actually in trouble, Zach will “find” the have not room secret power.
so not impressed with the episodes this season. shaking my head again.

No matter what they are in trouble …. who is he going to nominate to hide his scheming? I think the plan will be to backdoor Bobby but who does he put up? The person that gets back into the house and ??? Will be interesting to read the spoilers later and see what the conversations are. Think Bruno is going to kick his ass not nominating Z/P. Zach and J/K did say it will be easier if they win the next two the plan may work. All the girls think they are in with them.

Watching Willow and Sarah make out tonight was…. interesting to watch to say the least. Ashleigh and Brittnee making out would of been better imo. ^.^

I’m starting to think Willow is even more clueless than Pilar in bb, Willow has no idea of what is going on and she is still with the chop shop. I’m think Pilar will make it to the end who’s going to waste an eviction on her.

Well, I think Shakespeare described this season best when he said, “It sucketh.” The best thing that happened with Big Brother today was Simon and Dawg’s birthdays.

Bruno is about to reap what he sowed by taking the coward’s way out of the veto twist and pissing off Canada… and the rest of us.

Now that Ashleigh is mad at the guys for telling Johnny the girls wouldn’t vote for him, hopefully Naeha gets back in the house. She will easily rally the girls and perhaps get a REAL all girls alliance going. The only problem is, she’ll go after Bobby/Godfrey (Bruno is sure to be evicted unless he wins the next veto) instead of Zach/Jordan/Kevin.

But, please, Naeha, if you make it back in the house, wipe that dour look off your face. Stop scowling and looking like Grumpy Cat all the time!

By the way, I predict Zach will nominate Brittnee and Godfrey and keep his options open as to who to backdoor – Bobby or Bruno, with Bruno being his first choice. But, if he were smart, he would nominate Brittnee and Sarah to garner the support of Godfrey… and from keeping him from a sure spot in competing for the POV.

I just doubt he’ll balls-up and put Bruno and Bobby on the block. That wouldn’t be the consistent cowardly way this game has been played so far.

Obviously Zach wants to stay liked by the most amount of people this early in the game. I think he will nominate Britnee and Sarah with the possibility of backdooring Bruno. I think Bruno is a more realistic backdooring than Bobby or Godfrey because they will want him out before jury so he can go home to see his kids. Or at least that’s the reasoning they will tell everyone, knowing he is a threat to win the game.