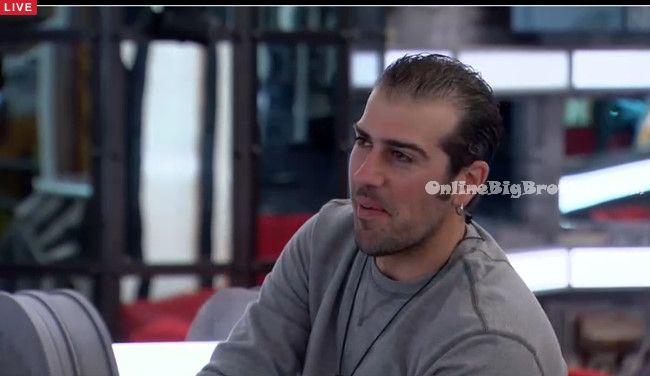 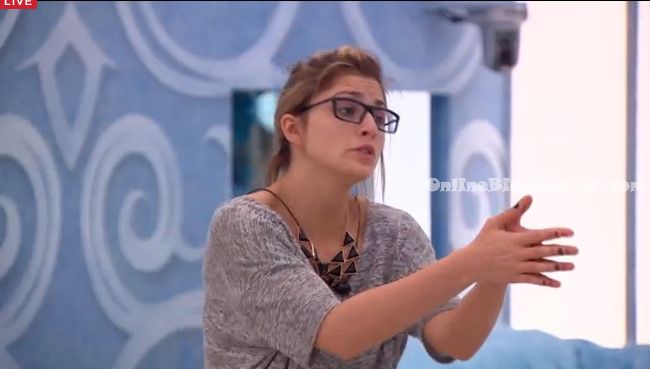 1:15pm – 5:35pmThe live feeds were blocked for the Power of Veto Ceremony to take place. This weeks veto has is the Canada’s Veto Twist where viewers voted on either a “Forced Veto” or “Double Veto”.

Not surprisingly viewers overwhelmingly voted for a “Double Veto” not knowing that Bruno would end up winning the veto. There was a lot of confusion about what this twist actually was in the beginning as Big Brother made numerous changes in explaining it. As the Veto winner, Bruno had the option to a) veto one nominee b) veto both nominees or c) Choose not to use the veto on either nominee.

Bruno opted to keep his nominations the same and did NOT use the veto. Translation – This twist was a colossal failure.

When the live feeds return – Willow in the bedroom – I heard them say in 24 hours two people could come down. Sarah says what a stupid twist! Willow says they didn’t know who was going to win veto. Sarah says why would he use it. Sarah asks are you close with Bruno. Willow says I’m getting close. Sarah talks about the guys working together. Sarah says I really want to stay this week. 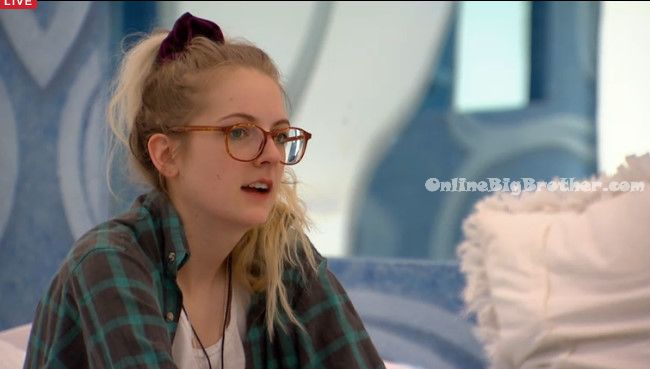 Out in the backyard – Jordan and Johnny talk about how the twist was a flop. It failed. Johnny says could have been a game changer.. it flopped! Jordan says its not often a twist fails. Jordan heads inside and talks to Zach. Zach says so the twist is done this week. Like they wouldn’t stack them back to back. Zach wonders about next week being a double eviction. Jordan says well they might because the twist essentially failed. Jordan says I think they bribed Bruno to use the veto on them. Okay Bruno you get a letter from home. Zach says I’ve never seen a double veto before. Jordan says nope. 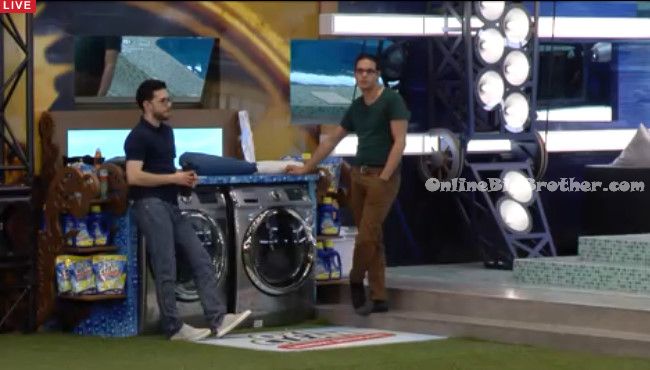 Why didn’t Sarah and Johnny decided to work on Bruno before the ceremony… so stupid.

But, still at least mostly everyone knows about Jordan and Zach’s alliance so i don’t see them lasting much longer anyway. Just bring Naeha back and the games better begin then.

Well that’s a bummer that the twist failed… I like Johnny but I’m hoping Sarah stays, and Naeha returns.

I think Bruno’s gonna regret that decision.
Also I think I’d use it just so it doesn’t look like my season was a flop ahahaha
What a bad twist

The idea was sound….the rules were stupid!! Should have had BOTH forced! That way the HOH would piss off at least three HG. …now if Bruno did use it on, say Newport…that would have been great.

In other news, what does Ash’s tattoo say?

I’m easy and I’m DTF on the first date .

It says “Angels Among Us”

Bruno will be hated by Canada now for wasting this twist. If he had been smart, he would have spoken to Sarah and Johnny and said, “Listen, if I take you guys off the block, you have to promise you won’t come after me and we can all go for Zach and Jordan.” It was the PERFECT timing and he RUINED it.

I really hoped for better but I’m just as guilty; I too voted for double veto wishing anyone but Godfrey, Bobby or Bruno would win and change the game. Here’s hoping next HOH can shake things up!

I feel like Zach and Jordan want to be Dr. Will and Mike boogie so bad. Ugh

CYNICAL RANT:
well of course nothing changes. I got optimistic for a second somewhere around midnight, but by morning it occurred to me that the entire double veto and its inherent ill-defined limitations was just a tool. I still think production is going to spin it as peril for the hero Zach in order to attempt to get people behind the horse they’ve been backing. now the battle lines of Zach and the couples against the evil chopshop et al. will become the focus. so nothing changes this week, opening the door for next week’s two sided war.
this is really starting to feel very adel and Frankie all over again in terms of manufacturing a posterboy.

Whenever I hear “Captain Canada” I vomit.

Maybe I misunderstood, but wasn’t Bruno supposed to be forced to use the veto?

No our option was either forced single or double. With the double Bruno could not use it or choose to replace one or two nominees.

He had the choice to take off both, take off one, or not use it at all and he obviously chose not to use it.

The wording of the veto went through a daily mutation.

It sure looks this is going to be a totally underwhelming week!!!!! Snoozefest.

Maybe Johnny’s still out this week, but from next week onward, things are bound to be shaken up right?

Or at least, that’s what I’m hoping for…

expect possible delays for the sunday night episode. it’s twenty minutes until start and global is running the masters. they can run long.

Big Brother should also just make the forced veto be the only option by default one of these next weeks for screwing up the twist this week. Make it during a week when the Newports guys aren’t HOH preferably.

Hope Sarah overplays her hand to the point that they send her home.
Hope Godfrey wins HoH next week and sends either JP or Zach home!!!!!

Yes, let’s delay the mega flopity, flop, flop faceplant as long as possible. Maybe prod can spin “something”. Nah, this is just a plain old FLOP.

another name
Reply to  Hiii guys

in terms of ability to figure out what’s going on in the game, sarah has been far more accurate more often than jonny. he’s been clouded by his kevin fixation for way too long.
for that reason, if one of the two must go, it would be preferable for jonny to be the one that leaves.
I expect Zach to make jury. I expect Jordan to be arlie’d out the door, but also make jury. kevin will be the one to fall of the three before jury.

Does someone have this episode for streaming

Hope Johnny will win his way back into the house next week.

I hope this cast gets cancer.

When someone said other day that Canadian’s loves a good underdog, they are for sure right but all the Zach and jP haters, who are you rooting for, obviously not the one who is playing the best game at the moment because it is them. Now don’t get me wrong I love Sarah, I feel like she is the only girl who could win this game and I am rooting for her but not to be on team bruno, bobby, god side because booby and god no nothing that is going on, Bruno does but he isn’t doing anything to act on it. If Neaha comes back inside she isn’t going to work with those 2 guys because she hates them, unless her mind has changed. I just don’t see anyone going after Jp, they will go after Kevin, Zack, Ash and even Pilar in that order before Jp, Jp and Sarah are the 2 to watch out for, if they team up it is game over.

I guess I’m the only one that is happy Bruno didn’t use the double veto. Just let them play Big Brother. The action and back stabbing will start soon. It always does. I hate production deciding the winner. Leave the game alone. Let the better players win on merit and not some friggin twistos twist.

The whole point of big brother is to expect the unexpected though. I’ve yet to see a season in the US or Can where there are no twist or the public doesn’t get involved in some way.

And even the best players have said that merit alone doesn’t guarrentee you a win. You have to have some luck or be super perspective and manipulative.

And the backstabbing has already begun, and things are still boring. Did you miss what happened to Johnny?

Yes! Canada’s Big Brother is the worst for over-doing twists. Let them play the game and find out who actually plays Big Brother the best! I’m happy it wasn’t used.

Bruno is not nearly as strategic as I thought he was.

You can’t play in the HOH Bruno! It’s going to be Sarah, Godfrey, Bobby, Britt , Willow (if she’s still with him) vs Zach, Jordan, Kevin, Ash, and Pilar. The that means there is a half chance Z/J’s side wins and guess what Bruno? Godfrey and Bobby are probably going up with you as a backdoor plan!

I’m not saying Sarah is with Bruno, but I think she might put up Zach and Kevin.

Maybe whoever comes back from sequester will be the new HOH. That would be something.

Side note: damn Canada. Here I thought they rigged the game at least a little. But no. They just had their own twist flop. #epicfail

Yeah, I’ve never heard of a houseguest having the option to not use a twist.

Bruno had the chance to make a HUGE move & he blew it! He could have said that this is what Canada wants so I have to do it. This veto was the game changer.

Are we watching the same show? How the hell are people favouriting Brit and Sarah.. Do you all not see how annoying and winey they are?! This is big brother not little sister! Don’t go crying over every little game move.

Am I the only one who noticed Bruno cheating to get his HoH? The rules stated individuals had to find their own letters, and by taking the letters offered by Godfrey Bruno cheated his way to the win.

Did nobody else notice Bruno cheating to get his HoH? The rules stated the houseguest must find their own letters, not have another houseguest hand them over.

Pilar does nothing bye bye. No reason why but I like bobby

I hope Kevin and pilar really become. Couple they Re so cute together. Get rid of brittnee willow and Jordan Jordan extremely smart