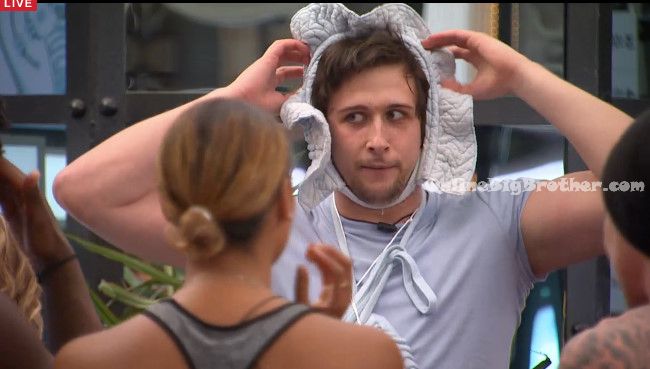 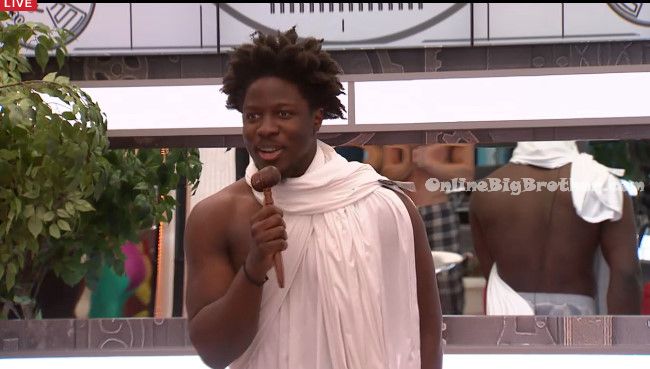 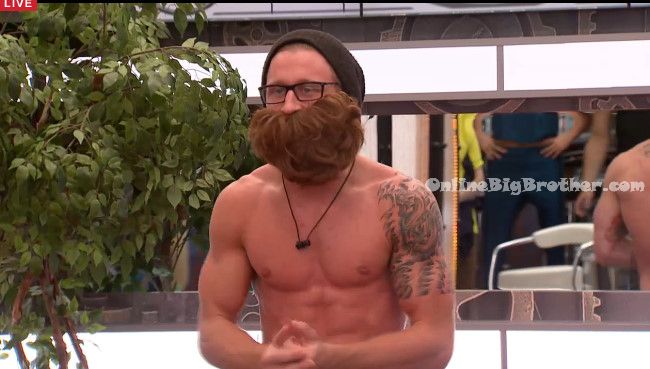 Godfrey as host Arisa Cox introduces the BBCAN2 Rerun segment. Bobby as Kenny Brain comes up to to the front and introduces himself as being a model that’s gay but he won’t reveal that to the house. Johnny is Andrew. He comes up and takes his shirt off saying he has a tattoo of hops on his chest. Ashleigh is wearing the costume Heather had to wear last season. Pilar is Rachelle Diamond wearing the hotdog costume. Jordan is Paul. Bruno is Jon Pardy. Willow is Sabrina. Zach is Kyle. Brittnee is Ika Wong. Kevin is Arlie. The first scene they do is the Paul Jackson scene when Paul called Andrew a racist and a sexist. They re-enact the Ika Wong BBCAN2 moment when Ika shredded the house guests letters. Check out the videos below of the house guests acting out the moments from big brother Canada 2. 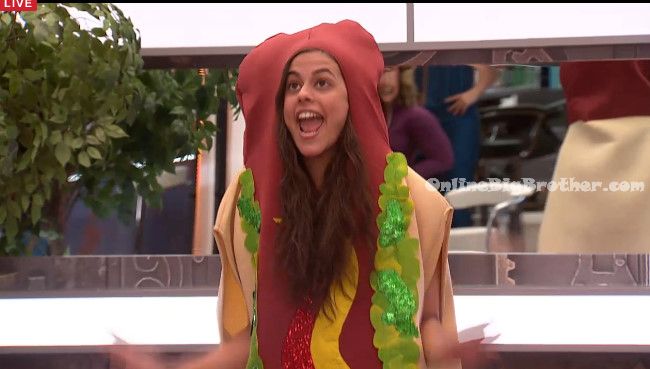 Bobby re-enacts when Kenny announced he was gay to the other house guests. 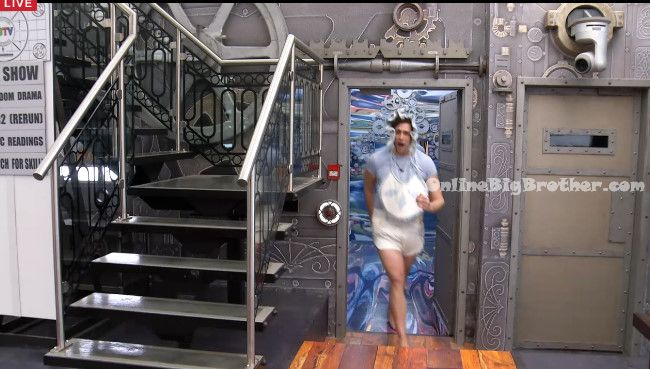 5:40pm – 5:55pm All of a sudden the camera focuses on the diary room door and out comes Big Brother Canada 2 winner Jon Pardy. He yells “WAKE UP CANADA!” All the house guests go nuts! They all crowd around him and scream. They sit back down after and continue the BBCAN2 re-run with Jon. The go through more BBCAN2 scenes and Jon plays himself in them.

5:55pm Big Brother blocks the feeds and when the feeds come back a few minutes later Jon Pardy has left the big brother house. All the house guests talk about how great it was to see and talk to Jon. They talk about how Jon said that Canada is loving watching them all. You guys are killing it.

Jon said Canada is loving watching all of them? LOL.

Production fed him that line.

To be fair, what else he supposed to say??…Canada hates you, you and you….lol…

another name
Reply to  Kenneth Chow

YES! if he did, it would be the first time I actually respected something jon did in the big brother house!

Who do you all want to come back?
Johnny
Naeha
Graig
Sindy
Risha

Naeha, she will shake things up!

Who is the maintenance man anyways???…lol…

Jonny… or Naeha but i feel more people will be less willing to work with her than Jonny. I feel naeha will get ganged up on even more than Jonny did. Either one though.

Naeha because she’s my favorite and could win comps, or maybe Sindy, as she has the most potential to re-integrate herself in the game (compared to Risha, Craig and Johnny).

Other Doug
Reply to  Simon

Dawg. Am I allowed to give him my entries to the “win your way into the BB house” contest?

I really appreciate that most of these house guests not only know the game well, they even know every player from last season and other past seasons. It’s so different than BB US where you are lucky if 4-5 hgs know about Big Brother at all lol

. I love watching former bb guests return and love seeing pics of them online celebrating together. I see their twitter between each other but I never see Sabrina or Andrew from Season Two in any of their tweets or pics..Did they drop them from their bb family..i would love to hear why and if they ever confronted either one.

another name
Reply to  To the curb

read that Sabrina had moved. first to los angeles and then to mexico

To the curb
Reply to  another name

i saw she opened up a salon in montreal but surprised none of her housemates attended..something going on they never talk or include her in twitter her or andrew and only mumzie ever includes kenny

another name
Reply to  To the curb

just checked her twitter to see if the story I read was accurate. as of April 12 still living in mexico. has a few tweets with Allison it looks like. someone calling for a truce between them, there’s no eating disorder or food issue problem? not interested enough in the two of them to dig any deeper (I dislike twitter).
she saw willow imitating her today. says she loved it.

idar2dream
Reply to  To the curb

When Neda & Jon found out what Sabs said to the livefeeders through the cam there was a huge fallout immediately after the show ended. Not sure if there is more or if there was a truce after that but I do know that Neda/Jon said she would never talk to Sabs again.

another name
Reply to  idar2dream

I have seen that Sabrina has had some contact with Alison and Andrew. have seen that Andrew has had contact with tom (season one), Kenny, sarah, Sabrina, Alison, and adel.
that’s just by looking at instagram tags starting june 2014 up to about December. haven’t heard any of the jon/neda vs. Sabrina story. but not surprised.

Lol! They just showed Bruno with the Veto in the preview on the EDITED SHOW!!!

It says a lot when I’m voting for the maintenance guy and Dawg at this point in the season. I’m really finding the current HGs are boring.

but britnee’s imitation on Ika was pretty good

Here is my grumpy BBCAN3 statement for the day.. I promise there won’t be any more ;)

It took BBUS 16 seasons to hit it’s low point.. so far BBCAN might have done it in 3

that episode… wow. was that ever overproduced crap.
the way that was edited… does production watch the feeds?

I rarely watch the TV shows.. The feeds/TV episodes are 2 different shows and my preference are the feeds.

then I recommend NOT watching this one. power of veto ceremony is half complete and according to the show nobody has caught on to Zach, or Zach and Jordan, or Zach Jordan and Kevin, or the diapers. at all. almost 1/2 of the hour was spent with melodramatic music showing the end of jonny and kevin.
they did the pixelated twinkle on zachs teeth. with the sound effect. dear production: make it stop.
end of gobsmacked review.

Ugh.. worse than I thought

Have you forgotten about season 9??

can you refresh me on season 9? so many seasons……

Does this mean they get kfc for their feast? That would be funny, line up a table with all the fix’ins

I hated Sabrina as much as the next person, but my gfriend met her and she is such a sweet girl (also she looks good/in shape).

Quote: “They talk about how Jon said that Canada is loving watching them all. You guys are killing it.”

Too bad they took that the wrong way. They’re “killing it” alright. This season is dying.