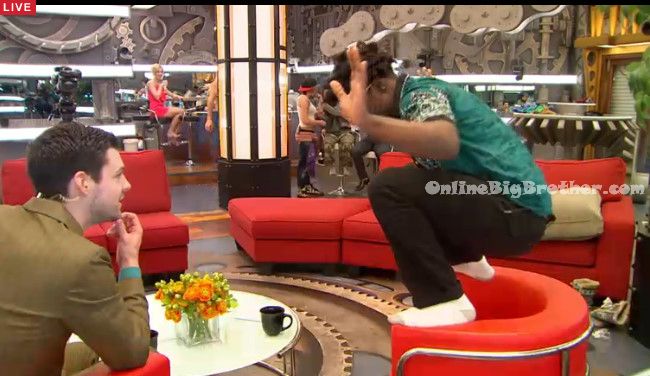 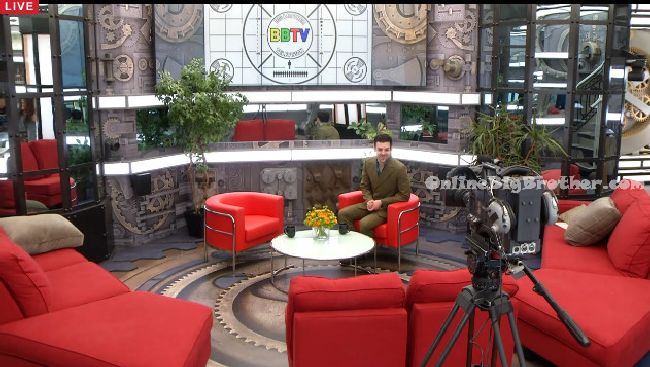 Kevin starts the show and introduces Willow as Justin Beiber as the first guest on the show. Kevin asks him how she’s doing. He stands up and gives thanks to everyone and god upstairs. He explains that everything is all natural. Pilar rushes in as a crazed fan and hugs Justin. Security comes in and pulls the crazed fan off the show. Kevin asks him to do a dance. Willow then does her best Justin Beiber dance.

The next guest on the show is Doctor Godfrey Mangwiza … Godfrey says that he has made it his mission to study poop. He talks about how to get your full release. Godfrey stands up on the arms of the chair and shows Kevin how to properly go to the bathroom. He says he learned this from watching animals. 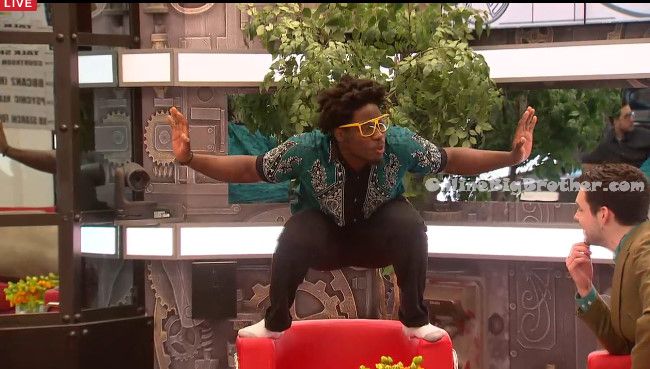 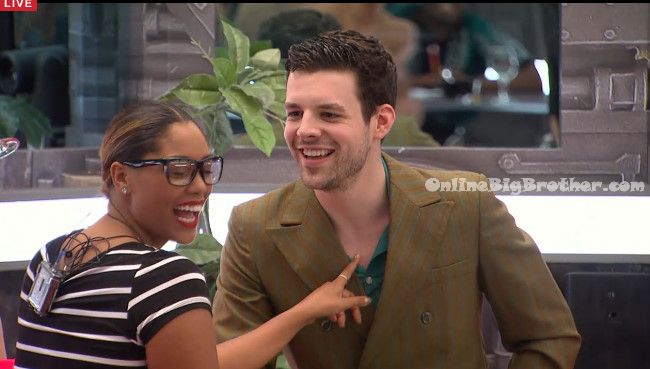 3:25pm Next show up is two girls and one gay. The show gets cancelled shortly after it starts. Bobby is up next on the show. Kevin asks how do you maintain your body? Bobby replies “Always be flexing!” 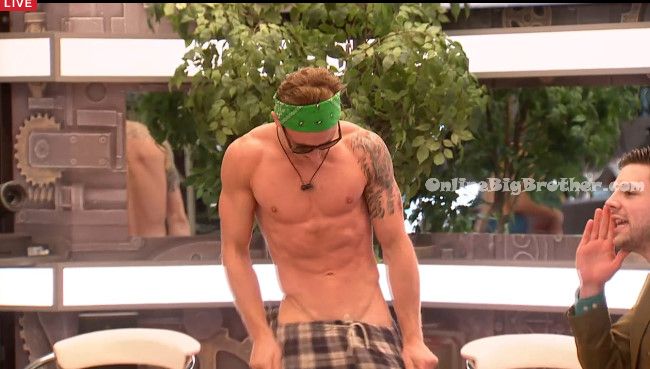 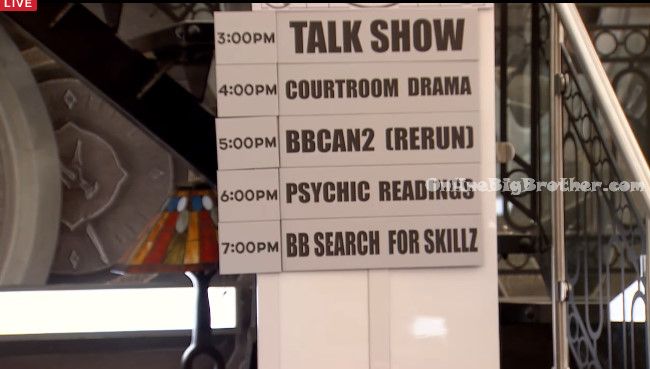 3:45pm Next Jordan does a commercial segment on slop and then talks about the BBTV timeline for what to expect on the show. Kevin brings Justin Beiber back on the show. Girls from the audience come up and throw their underwear at Justin Beiber. Kevin asks Beiber how he keeps his figure. Justin starts doing pushups. “Just make love to the floor.” “Im a man now because my mom says so” “Everyone in the audience you get to touch my boxers” Kevin introduces Judge Sarah up onto the stage to talk about the courtroom drama coming up in the next segment.

3:45pm – 4pm Big Brother blocks the feeds.
4pm – 4:30pm When the feeds return – Sarah is hosting the court room drama. First up is Godfrey – Guilty of napping. Sarah says First off, you’re guilty” “They call him God but he’s got some sins to live up to!” Sarah calls up the plaintiff Zach. Godfrey says I am not going to stand for this, I’ve got rights in the big brother house. Where’s my lawyer Johnny. Johnny says f**k you! Zach says it looks like he’s awake but he’s actually napping. Godfrey says in the big brother house I’ve got a strategy to take a lot of naps to eavesdrop on conversations. Godfrey says if you let me go I’ll lick your scars. Zach stands up and strips off his vest. He then does a strip dance for Judge Sarah. 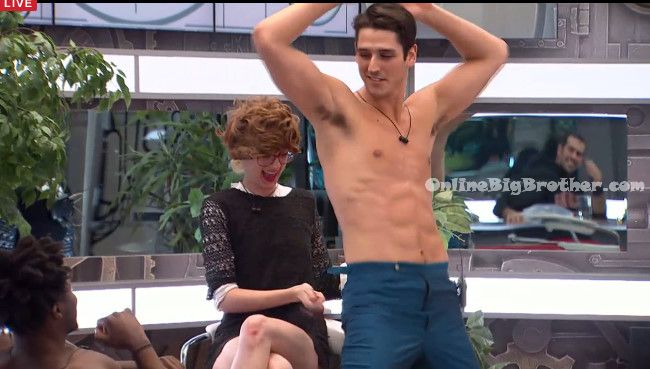 Sarah hops onto Zach’s lap and says “Look deep into my eyes and give me a little bit of evidence” Sarah “I’m guilty of letting my panties hang out” Zach pretends to kiss Sarah.

4:40pm Big Brother blocks the feeds and when it comes back the house guests are notified that the court room drama show was cancelled. Sarah says I’m sorry guys. Every tells her she did great and that it was really funny.

Would love to see a 30+ cast on BB, people who are so far in debt they’d throw their own kids under the bus to win the game, now THAT would be an interesting group…kids doing a fake tv show all day to keep ppl entertained is more annoying than entertaining, but I guess they’re desperate. I think I’m rooting for Bruno/Godfrey so far this season, just based on personality for now.

Bruno’s cool, Godfrey not so much. I can see why people are annoyed with him, his humoris just not up my alley. He is smart though.

I don’t start watching the feeds until 4.. maybe BBTV will be over by then.

I took a much needed break from the Live Feeds and, after watching these very painful videos, I’m glad I did.

What’s the point of these shows they’re acting out? Do WE get to vote if they were worthy for something? I hope so because I’m voting a big fat NO! Whatever this is for, they need to lose and suffer for it. These people are acting shamefully and embarrassingly immature.

But, I have to admit, as much as I don’t like these guys, Bobby’s body is ridiculously incredible. I’ve read several medical studies though that said having extremely tight and defined muscles (and very low body fat) puts stress and pressure on your internal organs and isn’t as healthy as, say, Kevin’s body, which is optimal for good health.

Oops! Never mind. I saw that I missed reading the update just before this one that explained this whole embarrassingly bad task. Too bad I don’t do Twitter or Facebook so I could just tweet to cancel the entire thing. They haven’t earned/deserved a party as far as I’m concerned.

God I hope they don’t waste any real TV time on this BBTV, very sad

you know they will.

Wow…really not so good…,JP. Didn’t know his bb as good as he claimed either…also swore too much
Johnny should be staying

I don’t think age has anything to do with player abilities. Some people are good and some people aren’t. It’s just a matter of who casting selects for the final cast. Just because you’re young doesn’t mean you don’t need money or aren’t ambitious. Amber for BBUS-16 was playing for her father who I believed had cancer and I don’t think she ever revealed that to the HG.
This BBTV is far better than the random chit chat that goes on! I’m loving everyone except Pilar, Ash, Jordan, and Zach who still seem to be irrelvant or trying too hard.