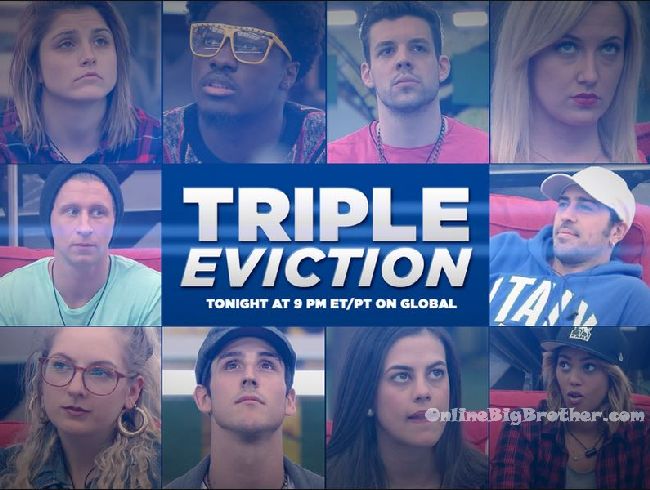 The day we’ve been waiting for weeks ever since Production leaked the triple eviction twist 2 weeks ago. A lot happen this week especially these past 3 days. Bruno was in scramble mode trying to save Bobby and at the very least reduce the people targeting him going into what they all assume is a […] 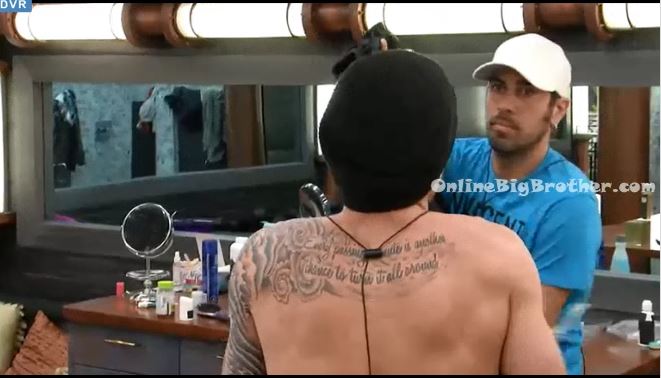 9:30am Big Brother wakes up the house guests. They start getting ready for the day. Bobby talks to Bruno. Bobby says what a crap shoot the next couple weeks will be. Bruno says yeah buddy. 100%. Bobby says no one trusts no one. It doesn’t even matter if you found out about lies a couple week ago.. everyone lied to everyone. Bruno says I don’t trust no one. Bobby tells Bruno that Zach and I had a more real talk last night in the pantry. Bruno asks do you think we (Godfrey & Bruno) are all right? Bobby says I think they’re turning it on to Sarah. That was definitely something I was trying to push for. Bruno says tell Bobby if you talk to him tell him I’m good. 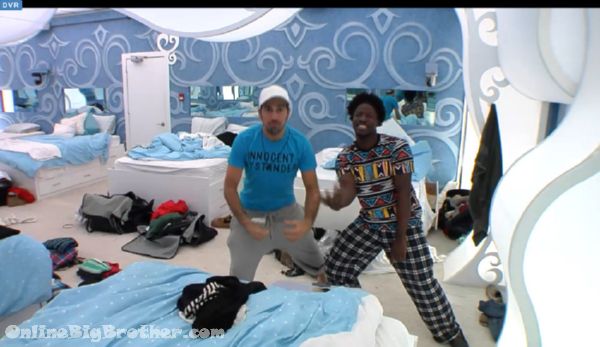 11:38pm Bedroom Bruno and Godfrey
Bruno wearing Godfrey’s innocent bystander shirt.
Bruno filling godfrey in on a bit of Zach info.. “He doesn’t trust Willow” adds if Zach is legit he might be going after the girls he wants Sarah out. Bruno – “that’s what he’s telling me”
Bruno – we’re gold dude we’re literally sitting in the best spot.. We flipped the game on them bro 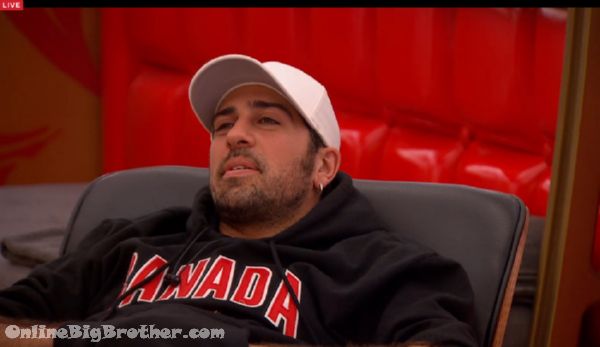 10:28pm HOH Ashleigh, Zach and Bruno
(Bruno is working a wedge between the couples)
Ashleigh and Zach telling him they are with him.
Bruno – you guys need me as much as I need you..
Bruno says he’s going after Kevin 100% 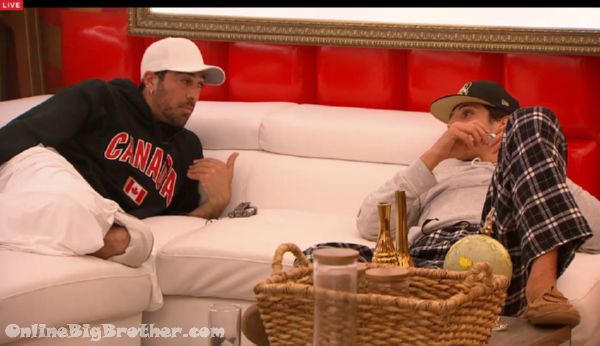 8:14pm Bruno and Zach
Bruno says he never talks to Kevin, “you know that right”
Bruno says never once has Sarah mentioned Kevin it’s always Zach. Bruno is worried Sarah has a secret agreement with Kevin.
Bruno – I want to be straight with you..
Zach – I just want to trust Godfrey man
Bruno – he’s in man 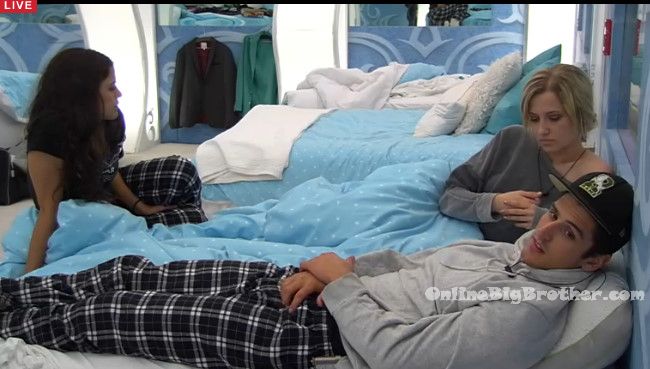 strong>5:10pm Bedroom Diaper meeting- Zach, Pili, Ashleigh and Kevin are talking. Ashleigh says if it was an instant or something I would do B and Godfrey. Pili says yeah that’s smart. Kevin asks what do you think about Sarah? Ash says she scares me a little bit. Kevin says she is pretty fixated on Bruno. Pili says that Sarah and B are really fixated on Bruno. Kevin says if we can get through this double then we will need to slug it out. Ash asks if they’re so fixated on Bruno right now ..who will they fixate on once Bruno leaves? Probably the couples. Kevin says Bruno or Godfrey leaving on a double is so ideal for us. Ash says you know what we could do .. Pili and I could start acting sketched out. 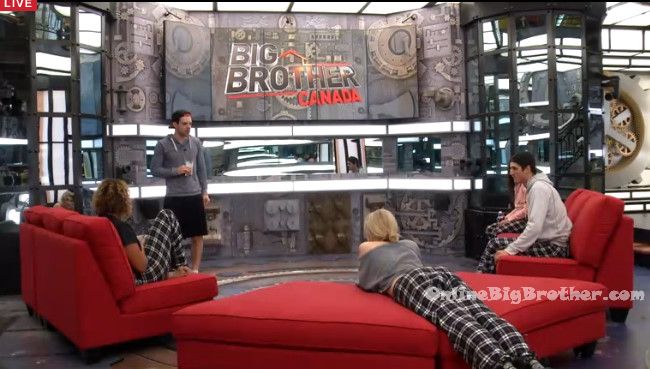 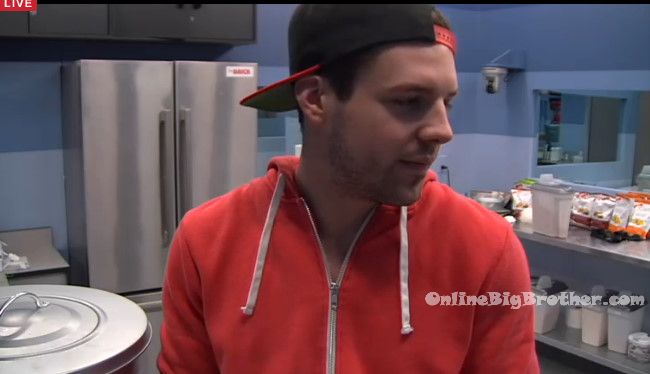 9:30am Big Brother wakes up the house guests. Brittnee says I had a weird s*x dream about Sindy. Willow says me too! She pushed herself up on me and I was like you’re into Sarah not me! Willow asks what was yours? Brittnee says We were all in the house and I just remember waking up and seeing Sindy having s*x with Kevin. Willow says I would take every other person in the world before Sindy with an S. Godfrey joins them. He asks Willow about her ring. Willow says its a university ring. Godfrey says I didn’t know they did that. I hope I get a ring when I go to university. 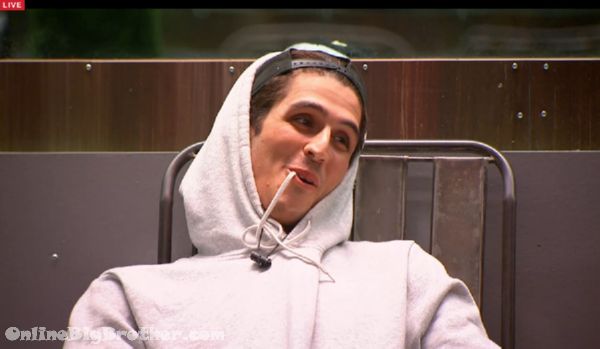 Zach joins them with a plate of slop cakes.
Bobby says he overheard some people talking in the hot tub, ‘Three girls I have nothing to lose”
says he heard Willow, AShleigh and Sarah say “We finally stopped the chop shop.. they were cheering.. I didn’t know how to take it what does that mean.. The chop shop hasn’t been relevant for weeks”
Godfrey – wasn’t Ash part of it too bro.. why was she celebrating. 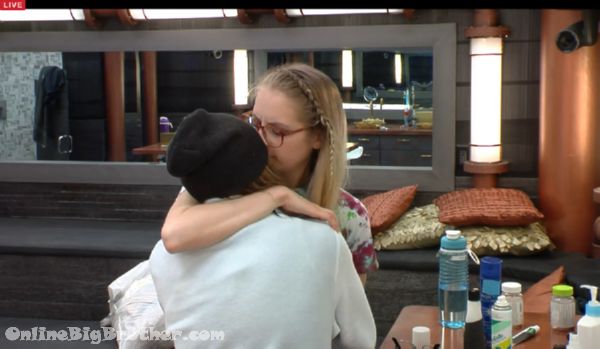 10:19pm Sarah and Willow
Willow – I’m sweating
Sarah – I like it when you sweat
Willow – Gross
Sarah – are you actually upset cause it’s breaking my heart.. I just want ot hug you and make you feel better but I can’t I have to act like i’m annoyed.. Bruno’s going to do what Bruno has to do. 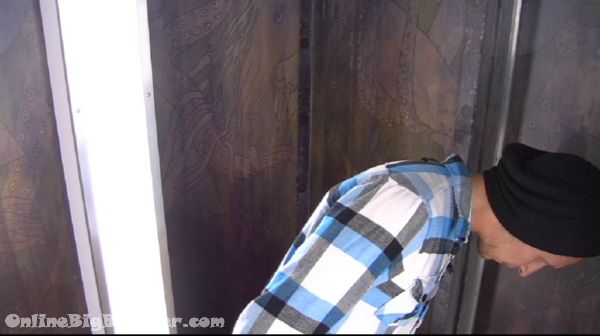 8:13pm Bobby and Bruno
Bobby was listening in on Sarah, Willow and AShleigh and they said “We stopped the chop shop.. I don’t know how to take that AShleigh willow and Sarah.. does that not tell you there is a all girls alliance.”
Bruno knows the girls are in an alliance together. 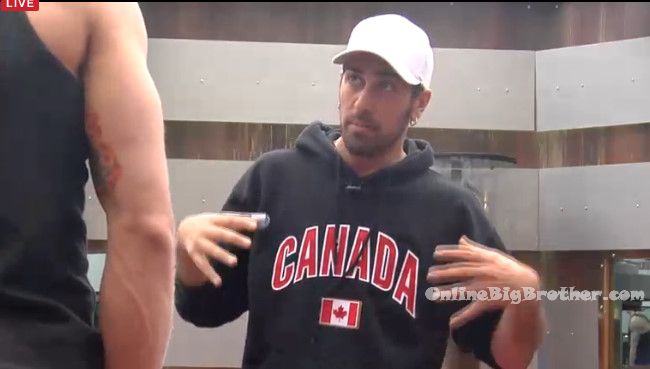 4:50pm Hot Tub room – Bruno, Bobby Godfrey. Bruno says if I win this week and I put up Zach and Ashleigh … Taking out Sarah isn’t a bad move.. she is poison!! She is the one that holds the girls alliance together. Once she’s gone that breaks. I still want to take out the couples though. We’re in such a bad spot. The girls are sitting so pretty because no matter who wins they’re safe. Godfrey says I wouldn’t be surprised if Ash is staying with Zach just for protection. Bruno says oh of course. The best was when you told her to go talk to Zach