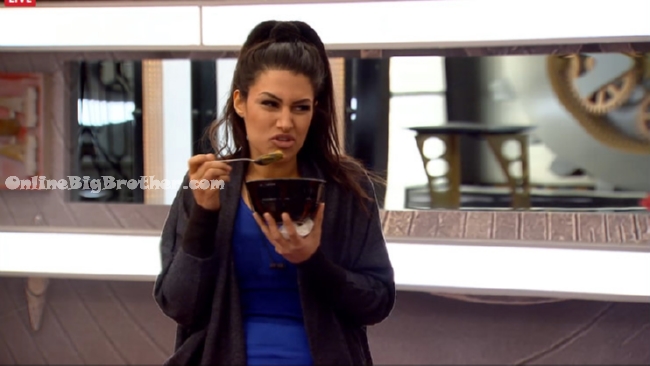 10:43 In the Kitchen Most the houseguests milling around getting food

Cindy calls Kevin out for cheating (I think she’s joking around). Kevin tells Cindy it wasn’t his intention to cheat he was just having fun. Craig says Cheating is not the right word, “You threw all the balls at Bobby”
Naeha is distraught being on slop. “I’m going to ask Big Brother For light maple syrup I can’t eat all that sugar it’s bad for you “ 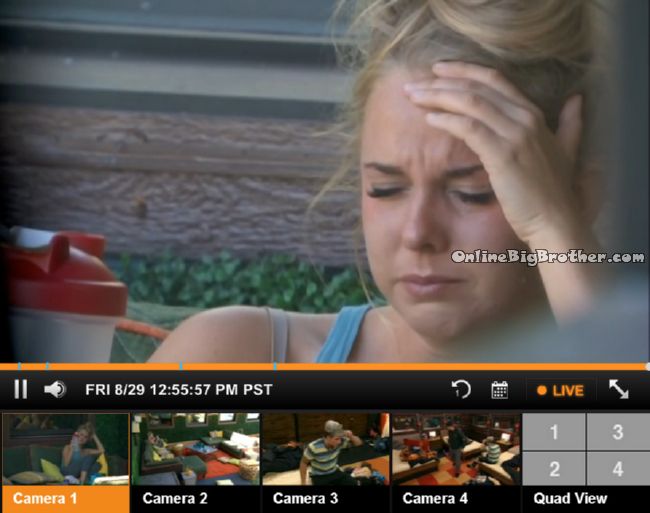 12:55pm Nicole crying she’s on slop again and going on the block.
Victoria asked her if she wants to talk. Nicole is fine tell her not to tell them she’s crying
Nicole talking to the camera “I want to go home this freaking sucks I’m going to be nominated”
Nicole – “I hate Frankie he’s a manipulator.. I just have to fight in a veto.. I’m praying it;s a punishment i’ll take all the punishments but if it’s the ball thing I’m freaking weak 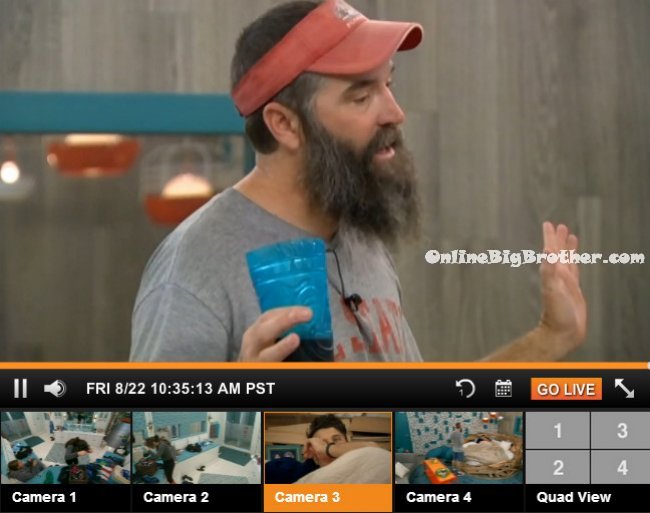 10:34am – 10:45am Donny heads up to the HOH room. Donny says I hate to wake you up. I would like to take to you today at some point. Should I expect to go on the block today. Cody says I think everyone has a chance right now. Donny says I remember a few weeks ago when me, you and Hayden were in the bee hive room and we were talking about how its about time someone else went up and felt the pressure. You have the opportunity! When I’m gone I can’t watch your back. If you put 2 powerful people on their side up.. 1 of them will go home this week. Christine will still go after Nicole. Derrick will still come after me. You will be in the middle as they dwindle down. Just think about it because the other day I had talked to Christine about how Zach had said she was the next to go. 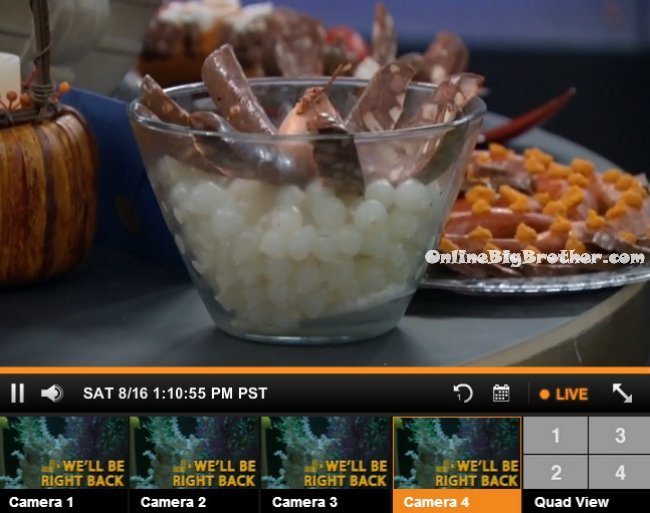 12:15pm Big Brother tells the house guests to report to the Head of Household bedroom and then blocks the live feeds. When the live feeds return – There is a close up shot of this weeks HAVENOT food on a smaller table. The havenots get to eat Transylvanian Goulash! Frankie chooses Christine and Victoria to be havenots. His reasoning is that they have been havenots for the least amount of time. Victoria asks what animal does sausage come from? Christine says these are from pork. 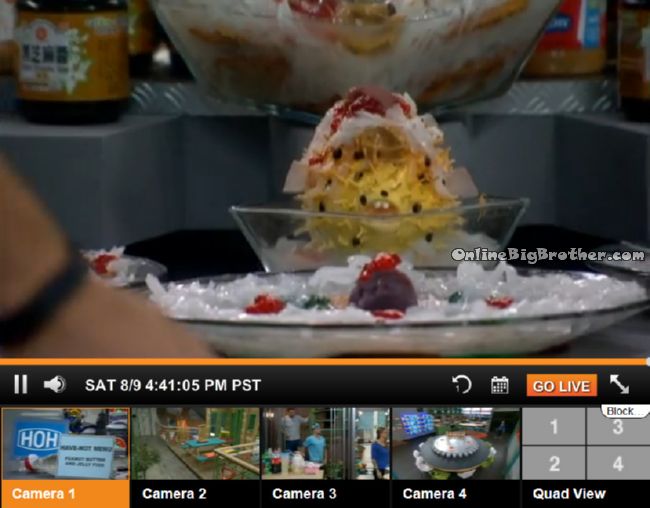 4:42pm
Peanut butter and jelly fish
Christine says Donny and Zach are the HAve nots.. I’m sorry.. that’s what I’m doing.. there you go.. Her reasoning is they are the two people that have done it the least.. 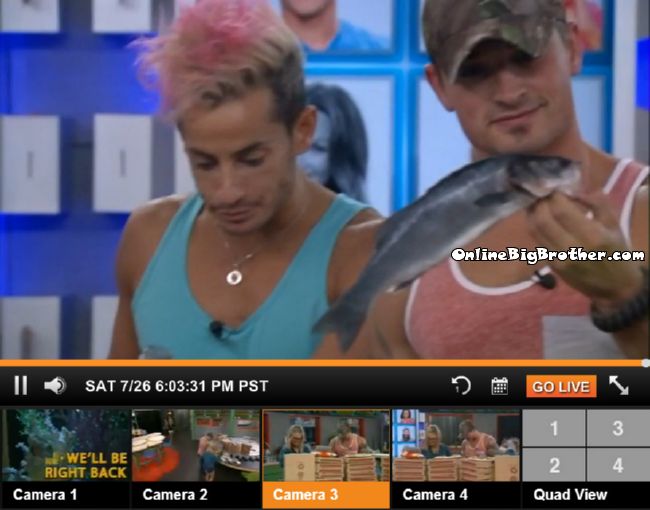 4:54pm HOH Christine, Frankie, Caleb and Zach
(THey are doing a fake fight)
Caleb – Backdoor me I don’t care.. iit’s hard for me to keep a straight face
Frankie – It’s hard for me to keep a straight anything.
Zach screams I WANT YOU GONE .. I WANT YOU GONE.. Beast mode Cowboy myu f***ing A$$ .. For Real get the f*** out of here” BEat mode peaice of sh1t
BEast mode pu$$y.. for real what the f**
Caleb – try to back door me watch what happens
Zach laughs “I will “
Cody runs upstairs thinking there was an actual fight 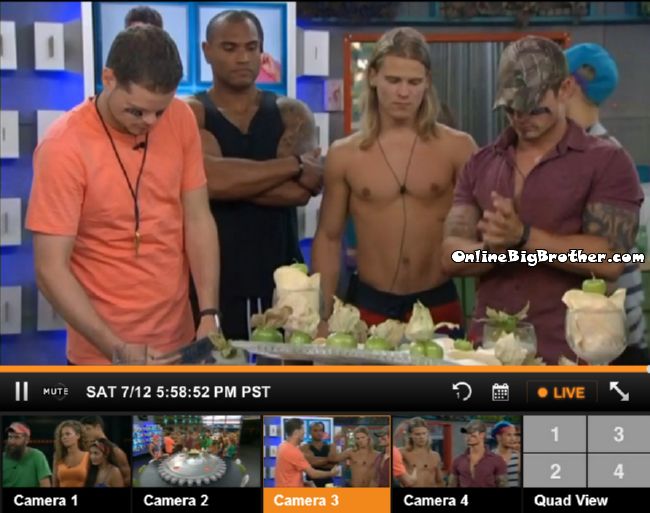 5:58pm Kitchen Have Nots
Caleb, Amber, Devin, Hayden (Hayden volunteers so Christine doesn’t have to be a have not)
They have “OFFAL Burritos” to eat a combinations of tripe, tortilla and Tomatillos
Brittany keeps saying how they can make so many different things with the ingredients, except for the tripe. When they find out it’s cow stomach everyone groans.
Devin – “I’m going to stick with Slop dude”
Derrick says Hayden can sleep in the HOH room every night and to be fair the night of the HOH comp all have nots are invited to sleep there 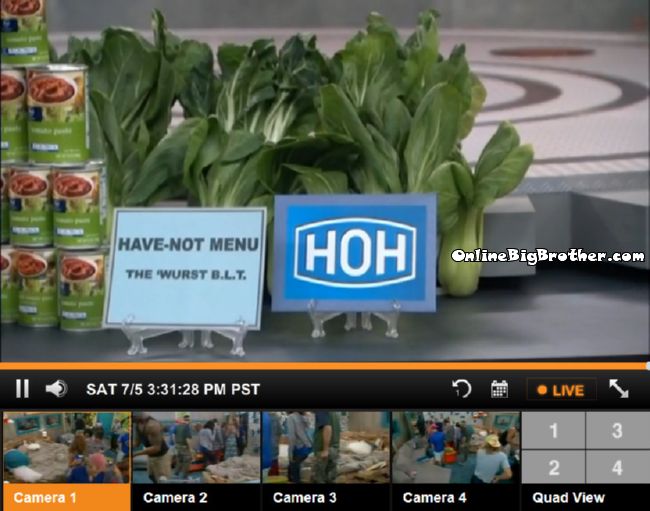 3:47 have nots Derrick, Brittany and Zach
She says if DEvin wins the veto he’s putting up someone good. Zach thinks it will be him or Cody.
Brittany says Devin is working on something with POW. Derrick – we’re going to do our best. Zach says she’s work two soldiers
Zach says if he wins the POV he won’t use it because they have the votes to keep her. Brittany- ‘you are not going to save yourself” (LOL WTF) 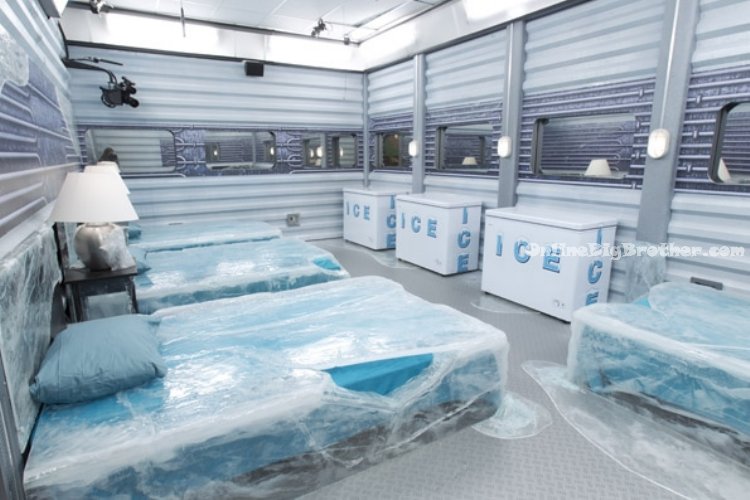 Summer time in the Big Brother house is usually hot both inside and outside where the house guests enjoy the California sun and heat, however, this seasons cast is are going to need their winter jackets if they expect to survive the havenot’s room! This season is no different in making the havenot room torture for the house guests but I think its going to take an even bigger toll on the havenots each week. The new havenot room is named the “ICE BOX” and it definitely looks like one. 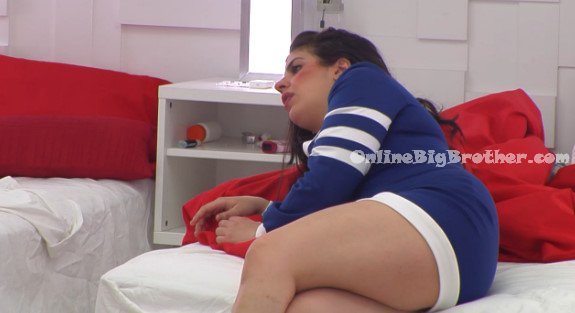 3pm – 5:30pm Big Brother blocked the live feeds for the house guests to compete in the Have / Havenot competition! When the live feeds return – We learn that Heather, Neda, Rachelle and Arlie LOST the competition. Either Jon & Adel didn’t throw the competition or failed at being able to throw it. Do you think Rachelle will slip up again or purposefully eat candy again and punish the whole house?

In the bedroom – Neda says that was the greatest comeback ever! Rachelle says I can’t believe I am on slop again! Neda and Rachelle go over to Jon’s bed and start punching it like a punching bag. They scream as they punch it. Sabrina says that is going on the episode for sure! In the bathroom – Adel says think of the positive! How much did you lose on slop last time Heather? Heather says 10 pounds. 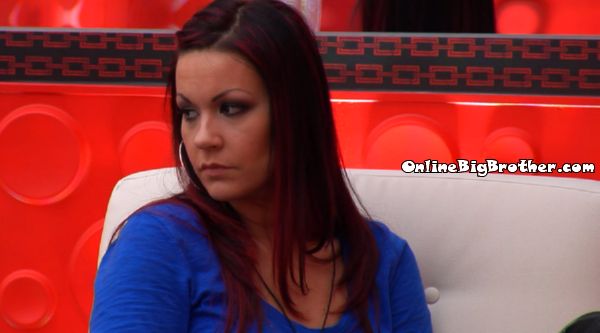 She says she doesn’t trust JOn one bit. She says he’s picking the other side over their side. Sarah wants Kenny in the house she says it’s bad for them to get rig of Kenny right now because he trust them.
She’s asking him for a favore to flip the side and keep Kenny in the game. She knows he runs the other side. 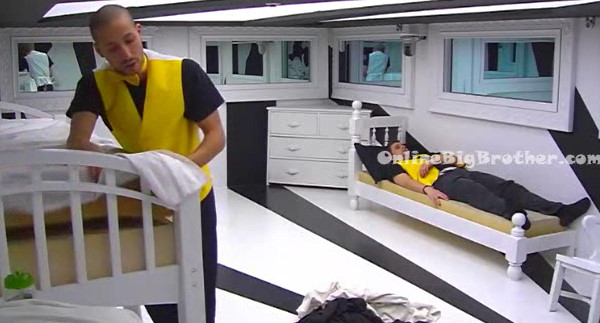 1:30pm – 4:10pm Big Brother blocks the live feeds for the have / havenot competition. When the live feeds return, they are only on for a short 30 seconds or so with all of the house guests out in the hot tub room. All the girls are dresses in dresses and the guys are dressed up with dress pants, shirts and vests. They yell out congratulations! Rachelle is holding a bunch of helium balloons on strings. They say that was awesome, that was cool. Andrew jokes now we get charged a $200 layover fine. Kenny says yeah we all sign our name on it.. They start to head out of the hot tub room and big brother cuts the feeds again..

4:50pm The live feeds come back .. Adel and Jon are in the havenot room talking. Adel says I was just in here! Jon says yeah at least I got a week off. Jon says these beds aren’t so bad you know what I mean.