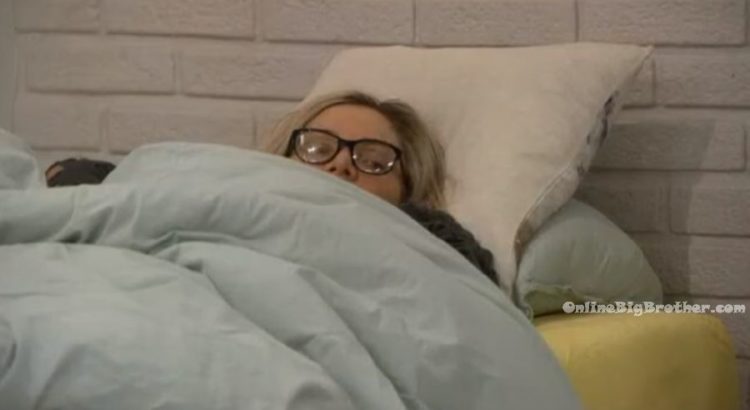 Spoilers – Enzo is not using the veto as of Sunday morning. The plan is to evict Keesha. 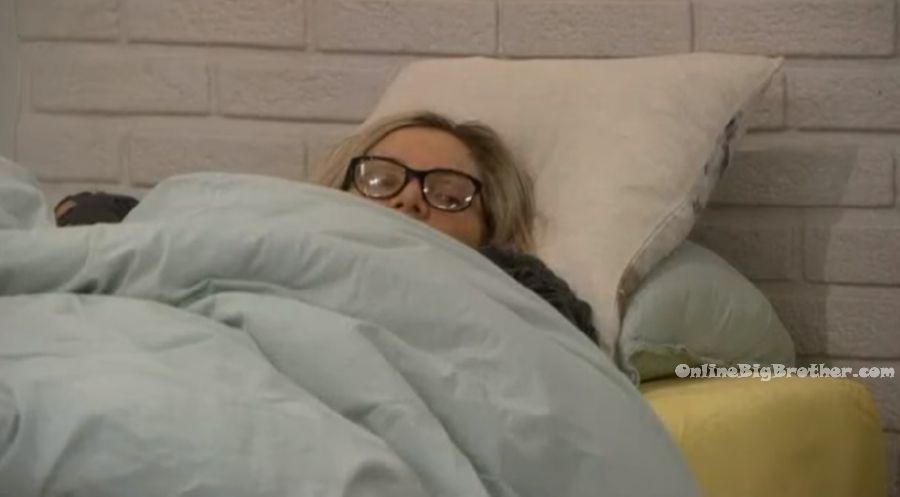 12:05pm Bedroom. Janelle and Kaysar.
Kaysar – I’ve never seen someone get a costume and not wear it as much as you. Janelle – well no.. I am just trying to lay low .. stay in my bed and not do much. Kaysar – I hope they open up the backyard! Keesha joins them. Janelle leaves. Kaysar – you’re about to witness a downward spiral. Once she (Janelle) starts eating .. its all going to go to hell now. Keesha – Uhh oh! Have you heard anything? Has anyone said anything? Kaysar – no. I saw Ian this morning and I asked him if he heard anything and he said no. Keesha – how is that possible? Kaysar – how is that possible .. how is this house even functioning. Keesha – There are two ways of doing this .. I don’t want to go around and be too bla bla bla. Because then like it starts sh*t on you. You know what I mean? You don’t want to be too much like that. Kaysa – yeah, she’s gaming .. she’s dangerous. Keesha – yeah. Nicole is like I would give you my vote. DaVonne said she would give me her vote. Kaysar – she did? Keesha – yeah ..and you guys.. that’s two more people. Kaysar – usually people vote in blocks but everyone is kind of doing their own thing right now. Keesha – everyone said we will wait till after the veto. Kaysar – well we’re here. My worry is that I don’t really understand what the HOH wants. Keesha – me either. Kaysar – usually the HOH says I want you to vote this way. In some ways that is a good thing. Keesha – I know. Kaysar – Ian and Nicole .. which way do you think they will vote? Keesha – personally right now …I think I have a chance but pretty soon everyone will start talking.. Kaysar – and no one wants to out themselves. Keesha – Enzo said you deserve to be here .. you just have to fight. Kaysar – that was before the veto? Keesha – yeah. 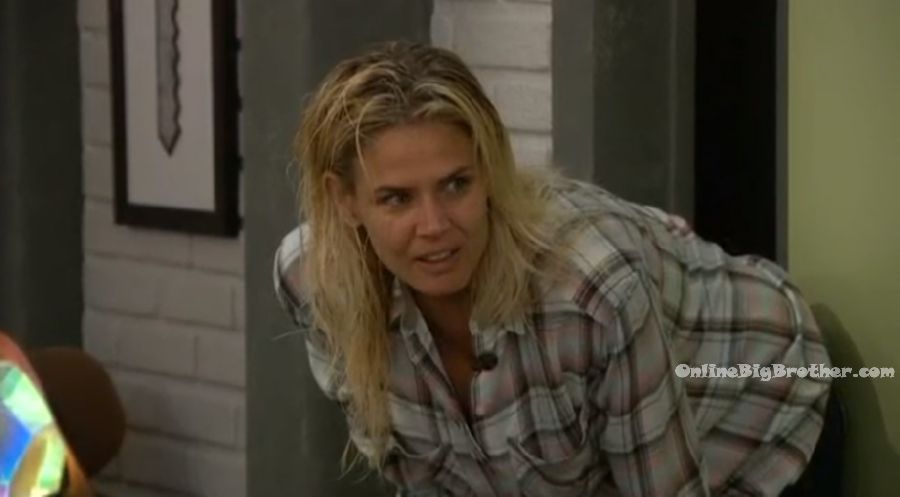 1pm – 1:50pm All the house guests are waiting around chatting. Everyone is hoping the backyard opens up soon so they can get out in the sun..

2pm DaVonne and NicoleF
Nicole – no one has said your name to me at all. DaVonne – no one in this house is talking game. DaVonne – when I was coming into the house and I saw the list.. I thought it would be old school vs new school. Nicole agrees. DaVonne – I don’t think Enzo is with him (Cody).. I’ve never seen him talk to him. I have never heard Ian talk game. Nicole agrees. I try to hang out with him because I don’t want him to ever feel alone or left out. I think its cool for the viewers to see us get together. That’s not what I care about at all but they know I’m loyal. I genuinely like you. I am playing with heart this season. I want someone to win this game that I like and I feel like I owe you a lot. Dani is a really sweet girl too. 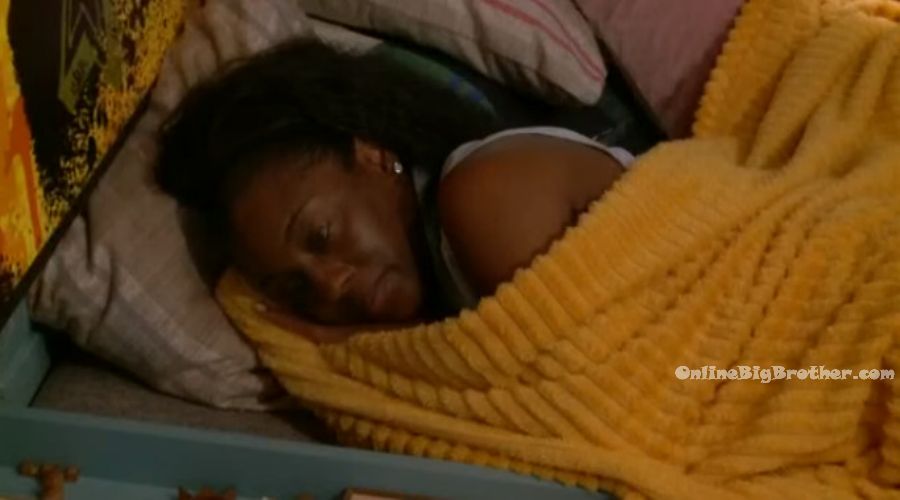 2:35pm Bathroom. Tyler and Christmas.
Christmas – I feel like we could go two different ways a competitor (Kevin) or someone we could use for votes (Keesha). They feel like Kevin is a more well-rounded player than Keesha. They think Kevin is a bigger threat. Christmas thinks it may be best to keep Keesha. Tyler – I am ready to ride this thing out. We can dominate. Once you start winning competitions. Once you start getting in there. Christmas – people are already looking at me as a threat. Tyler – let them think it. Everyone already knows my last game… I won a lot of competitions.. I’m like you know what I am just going to gun for everything! Christmas – let them think that.. this little wounded bird.. ain’t broke no more! 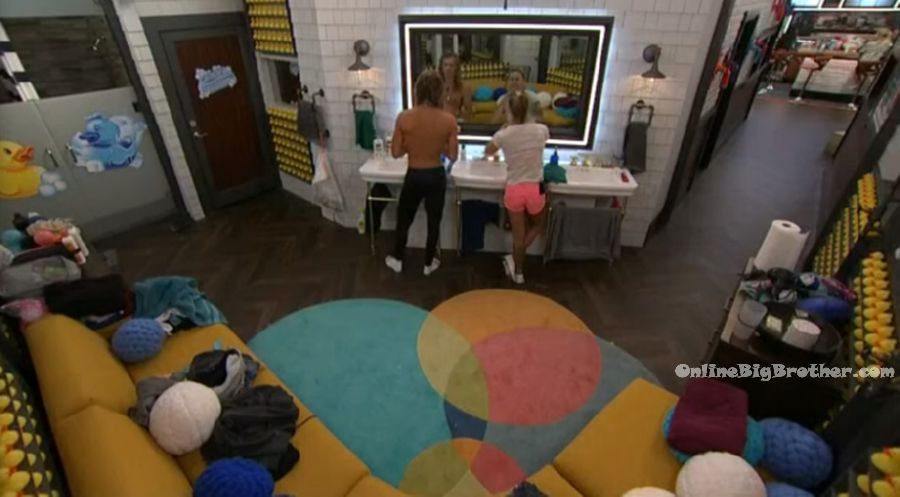 Take on last night’s Kaysar Janelle conversation:
Janelle is thinking they need some comp muscle so that the two of them aren’t Gilligan’s Island. Therefore she wants to join em rather than beat em with Tyler and Cody. Won’t work. AT ALL. But that is my take on why she wants that move. Her David take? She has NOTHING to go on with him in terms of how he would play the game, so that makes him an x factor. Delete the x factor so you are dealing with known variables. That’s how i took it.
Kaysar seems to be the more realistic of the two in terms of the viability of Janelle’s wish list. Well. At least he questioned it.
Costume? OH. That’s gotta be eating Nicolef. BIG TIME. I mean: BIIIG.
(i can hear it “yooou guuuuuyssz, it’s not faaayyyir. Whyyyy duzzzzn’t SSHHHHEEE have to WAAAAAYYYEEER it?)

What did he mean: Kaysar – you’re about to witness a downward spiral. Once she (Janelle) starts eating .. its all going to go to hell now.

Once Janelle starts eating junk food like m&m’s for breakfast it’s game on? I think that was the basic.

Ok. I didn’t watch back then so I’m still learning about some of the earlier players. 15 was my first season.

They’d seem pretty dated now, but 3-6 are sort of the basis for how every season since strategizes the game, based on the episode version of what happened on those early seasons.
I’d include 2, but it was the initial run at the gameshow format and other than Will, seems to be pretty disposable in terms of contribution to modern game.
Just be glad they aren’t still showing the jury the totally unscripted d/r of people in the house like in 3. There’s a reason they consider Danielle Reyes the quintessential best player to have never won. She was so robbed.

RUKidNMe
Reply to  another name

Haha, while I read that I could hear Nicole’s voice as if she actually said it. With that being said, If she did say that, I’d have to agree with her. No one else gets away with NOT wearing the costume, and if it was NA, everyone would be raising he77! So, Just put the thing on, Janelle!! It’s as much of the game of BB as the Have Not Slop or the Comps. Wear it or start divvying out some penalty points.

I saw the first picture and feared Nicole F. had retreated to the blanket fort for the season.

Good points for this season: No showmances and a generally more mature cast. Also it seems they are less focused on becoming a social media mogul like Ariana’s brother.

Areas of concern: The pregaming might create a boring eviction cycle with little entertainment.

I’m getting bad vibes but I’m still hopeful the next HoH can bring a little shake up.

Just a question:
Does it seem like Memphis’ game plan is to crawl under the radar to the extent that he doesn’t actually know what the house dynamic is… while targeting the guy that beat dan and the woman he was friends with post season because he betrayed her in season?
He believes Dani that she doesn’t talk much with Nicolef. The rest of the house, she couldn’t get away with saying that. Well. Cody might buy it, he’s spent 90% of the week in HOH. But anyone that’s actually moved around has seen the 2 chatting a lot. Like a LOT a lot.

Example of how this Dan and Derrick’s Dynamic Duo alliance of Cody and Memphis has potential to go awry:
Cody and Memphis come up with names for alliance members.
Cody goes to Tyler and names names to gather.
Tyler grabs Christmas and names names for that alliance. So now both Tyler and Christmas know.
Memphis goes to Dani. by the end of the convo the names have changed in the alliance.
Nobody has updated Cody, Tyler, or Christmas that Memphis has changed his mind about who should be invited to join.

See where the comedy of errors could come into play?

Names are no one’s strong suit this year though. At this point I wouldn’t be surprised if they messed up their own.

EPISODE WATCHERS:
Sunday’s episode is listed as beginning at 10pm instead of the usual 8pm.

I think it’s golf in some areas so they moved it. I’m recording it because I’m not sure how much attention I can muster at that hour…yes, I’m old.

I have high hopes for this season, but if the wrong person wins the next HOH I will be worried we are headed for a predictable season. Hopefully all Cody’s different alliances blow up by having too many with different members. Also do people not remember all the final twos Tyler had his season? Don’t they think he would play that again? Here’s to Janelle and my man Kayser. Hopefully some of these “players” will realize how powerful they could be to team up with those two.

another name
Reply to  Jan Nan

Jan Nan
Reply to  another name

You are right on the money. It’s so funny too me.

When Tyler was speaking to Christmas…”Tyler – I am ready to ride this thing out. We can dominate. Once you start winning competitions.’ A red flag should have went up with Christmas when Tyler said this because he is using her as a shield? Tyler is playing the same game he played before. So far loving the more mature players, no showmances and real game.