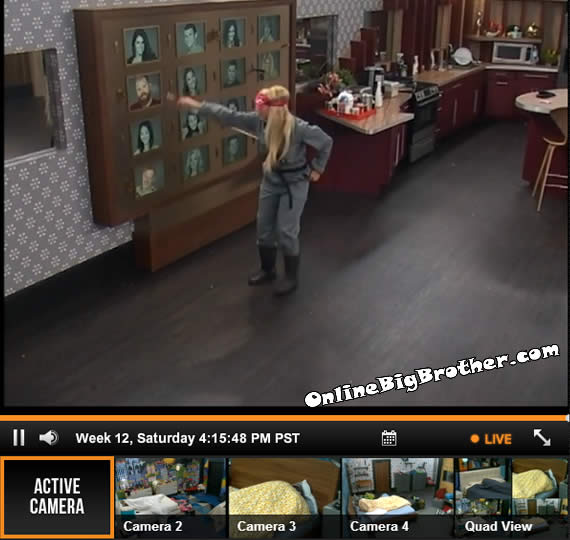 Spencer says Helen was wacky.
Andy says jokingly that Helen was crazy. Andy tells him about the knock outs alliance and how Helen was always telling him knock outs till the end then a couple hours later she was saying they need to take out Amanda. (Who was a member of the knockouts)
They both have a laugh about Helen, They mention how horrible she was at comps. Andy says he shared a early bond with Helen because they were both from Chicago.

Andy jokes that they were a rag tag bunch of rejects that got Elissa out. He says how funny it was because Elissa’s greatest fear was going home during a double eviction and that is what happened. “What a awesome way to send that B1tch packing” 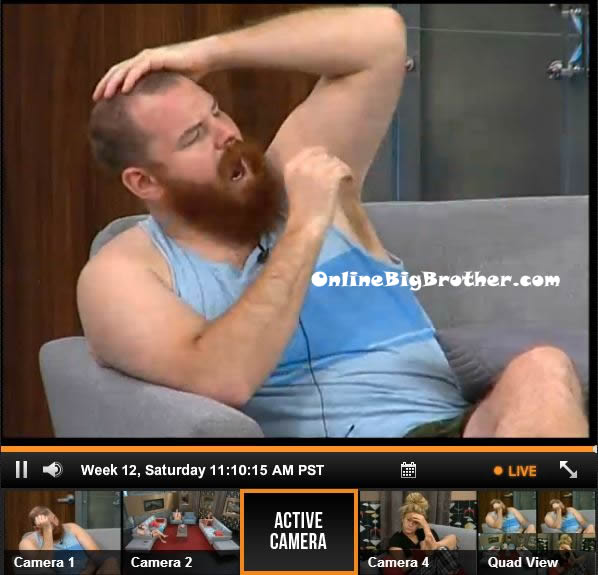 10:30am Big Brother wakes up the house guests. When the live feeds return – Andy, Spencer and Ginamarie are in the living room chatting. Spencer says that he is going to go in and request a means to get laundry done. Andy wonders if production has a favorite to win. Spencer thinks so but that it would be unprofessional to express it. Andy wonders if they will have the competition today because usually they wake us up earlier. He says although it is only for the two of us. Spencer says they might want to do it at night so it doesn’t matter what time we get up. Spencer says I do hope Elisabeth Shue stops by today.. I am sure she’s just stuck in traffic. Andy comments that he didn’t play in a veto until day 49. Spencer says yup I would rather be playing Judd in the competition today because there would be a 50% chance he would quit. 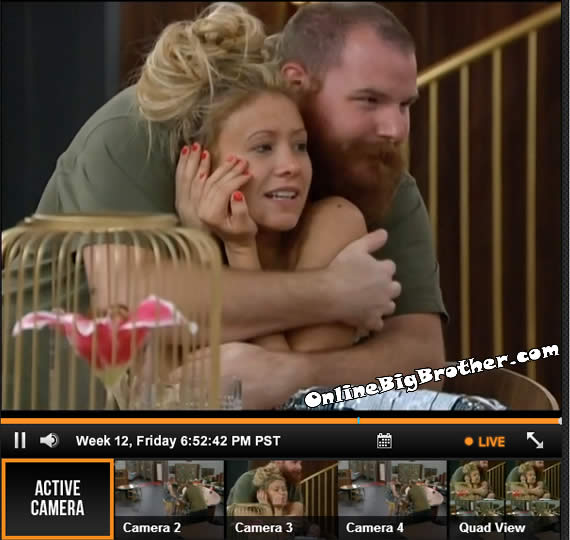 They mention how Nick really liked sex in the city.
GM – “that boy I don’t know sometimes.. and McCrae was like Hey Ginamarie that is kinda gay.. go f** yourself McCrae” 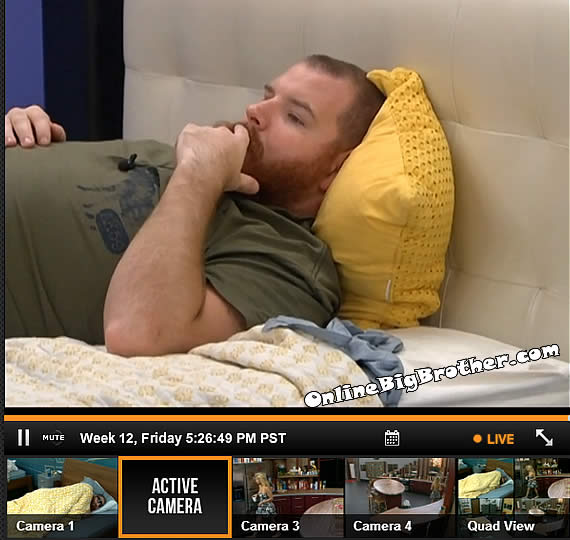 Andy is telling them there is not only the cameras they see attached to the walls/Ceilings there is camera people inside of the walls with cameras.
Andy -‘ What the hell are we going to do for the next 5 days’
Spencer jokes says he’s going to make a tent and m@sturb@te 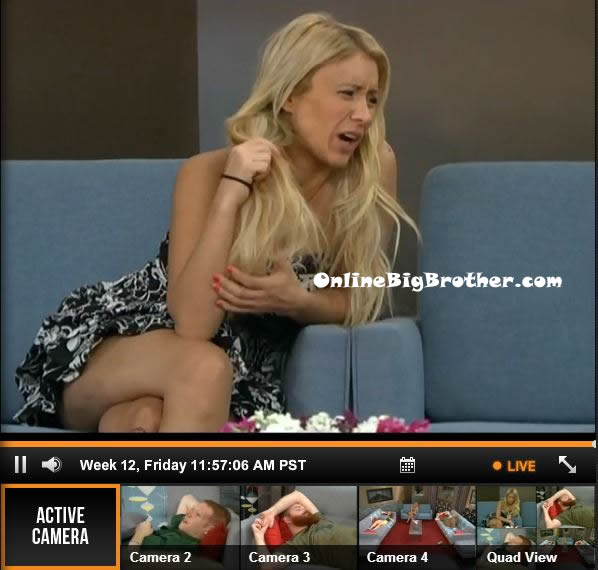 9:20am – 11:40am The Big Brother live feeds switch to TRIVIA for the Final 3 house guests to enjoy a catered brunch by big brother while they reminisce about the season. When the live feeds return – Andy and Spencer are cleaning up the dishes. They start taking stuff to the storage room. Ginamarie finishes up eating and says that was an awesome brunch guys. Gina starts doing the dishes. Spencer threatens to pull the table cloth out from under the dishes left on the table. Andy says no don’t do it. Spencer says its fine, it’s science. He grabs the table cloth and starts to pull and then stops. He says I wish just playing. He says he was just waiting for them to freak out and tell him to stop it. When everything is cleared off the table he tries it and says he is the reason why they don’t get nice things. 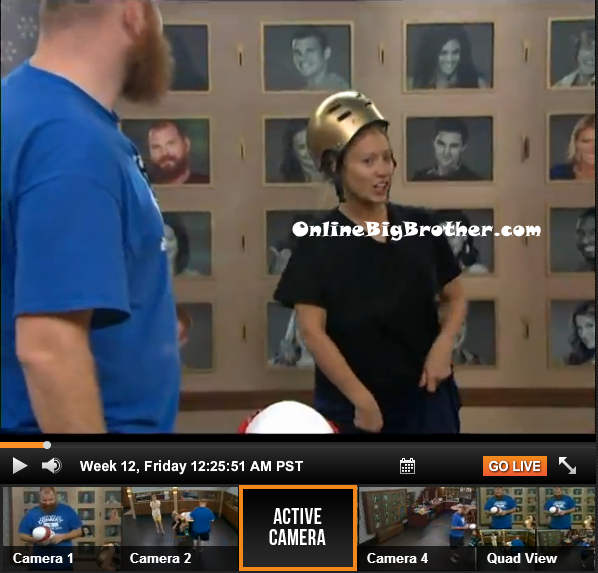 12am Ginamarie, Andy and Spencer are sitting on the living room couches. Andy says he feels like McCrae went into this week acting like he was going to win everything. Spencer agrees that he thought he did too. Andy comments how there were 3 HOH’s where the viewers didn’t find out who won until the Sunday episode. Spencer says that always used to piss him off as a fan watching at home. Spencer asks isn’t it crazy 11 million people know you. Andy agrees that’s crazy. Andy comments that there’s a lot to cram into the finale episode. Spencer says the finale episode will be a busy episode, Julie Chen can’t show up drunk like she did tonight. Andy says yeah she was drunk off her a$$. Spencer says she was slurring “exterminators.” Andy says well she called us the moving company first. And then they were like that’s the wrong alliance. 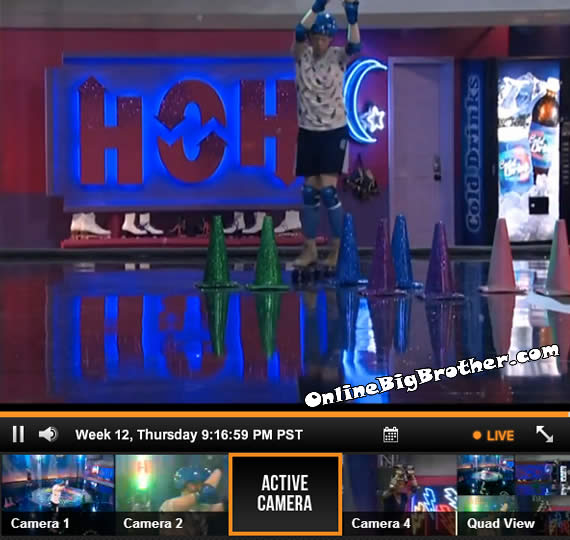 Spencer is out..
GM – “This is really hard with a broken toe”
GM – “Cmon DJ that is all you got”
They spray smoke on all over the competitors.
GM mentions that McCrae would have destroyed this competition. Spencer and Andy Agree.

Ginamarie wins Part 1 of the final HOH
Andy and Spencer will now compete for part two. The winner of part 2 faces off against GM. 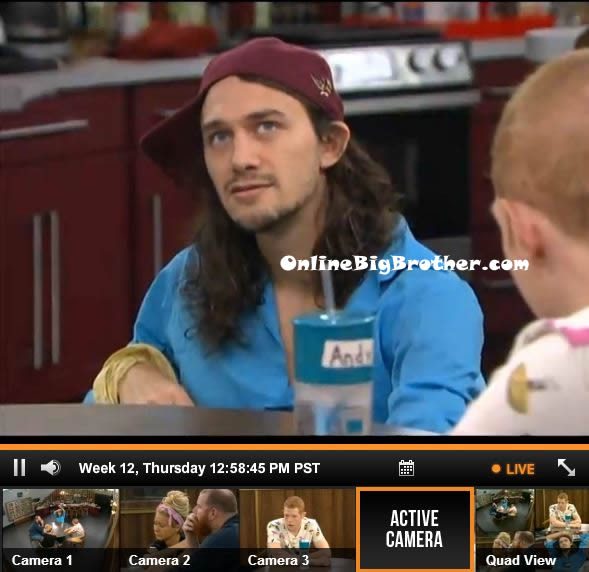 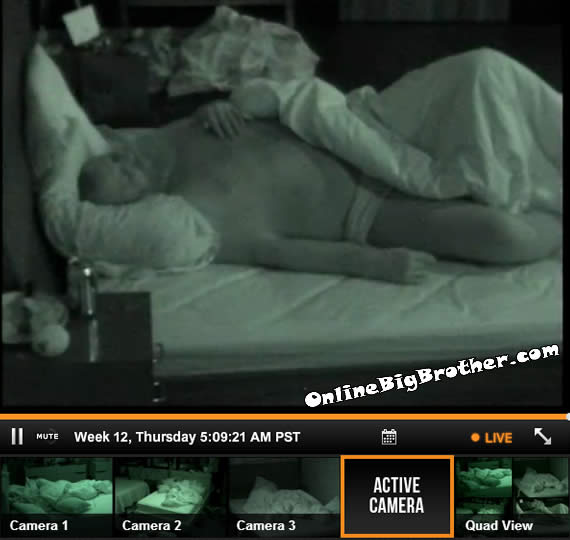 2:00am bedroom Spencer and McCrae

Spencer – “I still think Amanda was the best game player in the house”
McCrae – “yuuup.. I believe that in a way I don’t know what it’s going to be like watching it”
Spencer thinks from their inside perspective Amanda was a top notch player.

McCrae says he didn’t come into the game wanting to play the game he played. He wanted to play more the game Amanda played.

Spencer says he didn’t have the physical or mental strength to play Amanda’s game. Spencer adds that it really took it’s toll on Amanda.

Spencer says being on the block so many time ssucked but there was nothing he could do. He was in a position after the moving company that nobody wanted to work with him.
Spencer- ‘it’s been a pretty crazy summer for me’ 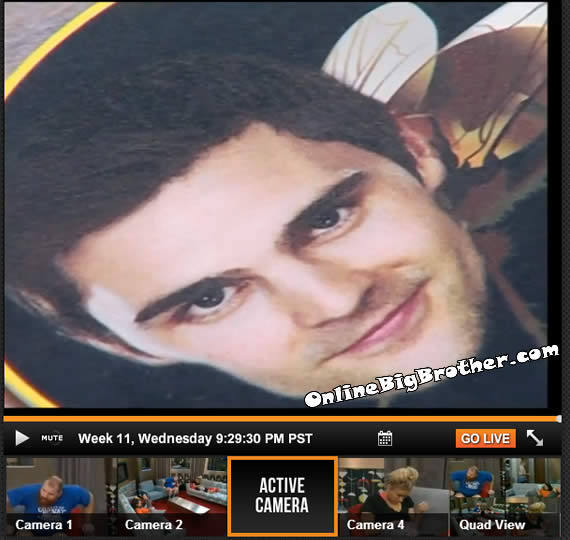 9:00pm living room MC, Spencer and GM
MC says he liked Adam from Big Brother 13 but didn’t think he made very many game moves, “Anyone that likes Metal and 90210 is a interesting dude”
very little talking going on. Spencer tells GM he likes the crafty bracelet she’s making “Love it”
Spencer jokes asks GM if she is ever going to dye those roots. GM “SHUT UP I did them last week”

They are all doing shout outs and the feeds keep getting blocked..

GM – “I want to say hello to the lovely Nicholas Uhaus.. i’ll see you in a week get ready”
Spencer – “do you stretches NICK”

Tonight on the Special Eviction Episode we find out the actual results of what has transpired over the last couple days. Big Brother has blocked the live feeds since 11am yesterday morning to keep the eviction and HOH competition a secret until tonight’s television broadcast episode. Unconfirmed spoilers of the results were leaked last night after the episode was taped and tonight we find out if those results were true or false.