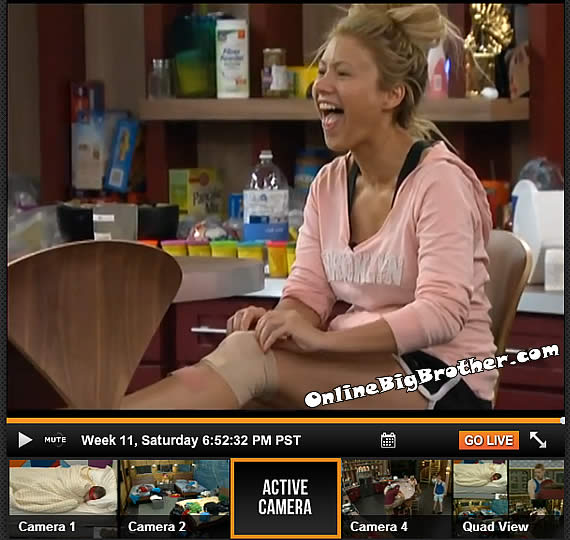 6:35pm HOH Spencer and Andy
S – “My Fear is you and McCrae will want to take GM to the final 3”
Andy – “I swear Spencer .. I swear on everything Spencer I will not f** you over”
Spencer – “But what if he’s the only one to vote”
Andy – I don’t think he’ll do that
Spencer says if GM is busted down what is going to stop McCrae from wanting to keep her to final 3.
Andy says he undersell Spencer and get McCrae to vote out GM.
McCrae joins them, they start talking about the POV competition.
Andy says Ian is cute.. “Well I’ve only seen you guys and JUDD for the past month and a half.. I also thought the guys working the harnesses were cute.”

Andy says GM’s leg is so cut the bone is exposed. 4:11pm JUDD, GM and Andy HOH
JUDD apologizes for losing his cool earlier today he’s really pissed he lost the veto he really wanted on of them to win it. GM reminds him that she is on the block to she’s just as pissed.

McCrae joins them. MCcrea says he felt Ian didn’t like him in the beginning but during the competition he liked him. McCrae points out that he never made eye contact with him. GM thinks Ian was probably being talked to in his ear (Production)
JUDD – ‘he was cheering you on during the comp’.. he was nervous he wanted you to win’
MC agrees says Ian was cheering him on during the POV competition
GM – ‘Thanks Ian go f*** yourself to” 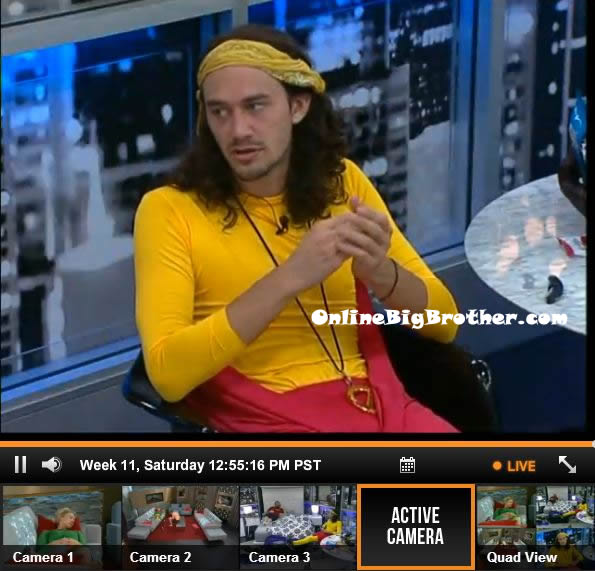 10:55am – 12:55pm The Big Brother 15 live feeds were blocked for the Power Of Veto competition. All of the 5 remaining house guests (Judd, Andy, Spencer, Ginamarie and McCrae) competed to win the Veto. When the Live Feeds return we learn that McCrae WON the POV!

Up in the HOH room – Spencer and McCrae are up in the HOH room talking. Spencer tells McCrae that he doesn’t really want to get involved in it on who to keep. He says that they are probably going to try and campaign to you. McCrae says that Judd already started campaigning to me. Spencer says yeah that’s why I called you up here. I want you and Andy to come to a consensus. I will go with whatever you two decide. McCrae says final fucking 4! 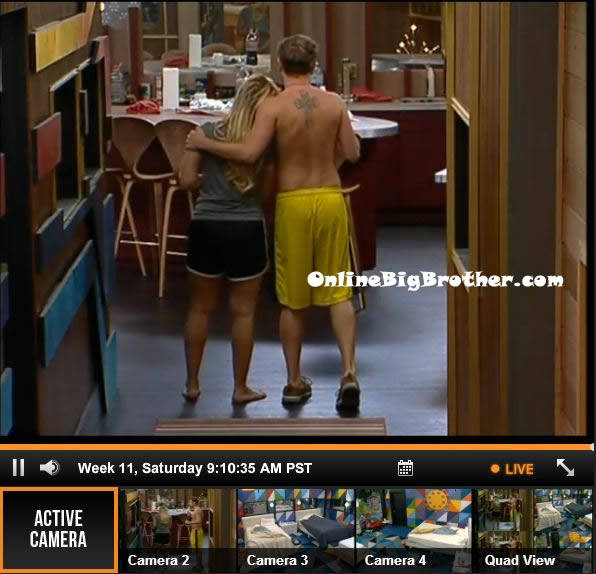 8:45am Big Brother wakes up the house guests. When the live feeds return – Judd and Ginamarie are awake. Judd tells Gina that he got a goodnight sleep. Gina comments that he foot feels a bit better but that it still hurts. She says she’s going to go do her makeup in bed and then lay down. Judd goes and talks with McCrae. Judd says he’s got this one. McCrae says he wants to win this one so bad. Gina and McCrae go back to sleep. Judd comes through and yells “Ya’ll gonna learn today! Pip squeaks!” Judd goes into the rainbow room and tells her his back is sore but doesn’t think it will affect anything. Judd wonders why Spencer needs to be in the diary room so long. Judd tells Andy that Spencer’s in the diary room. Andy says I’ll get up when I need to get up. Judd starts stretching. 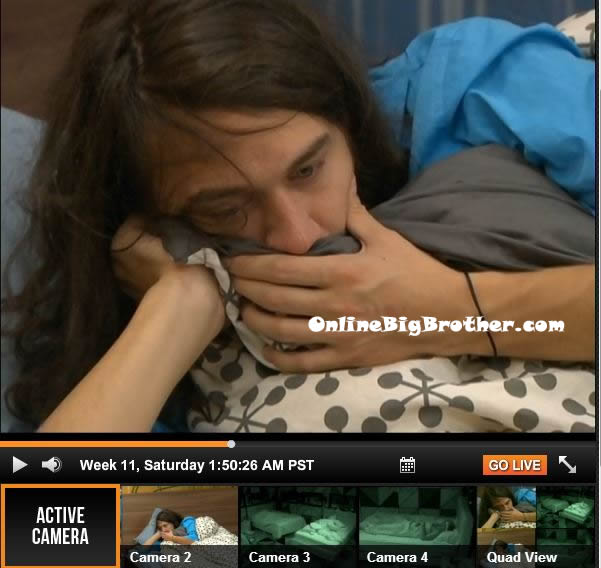 12:20am Judd jokes to Andy that he is going to go claim his bed in the havenot room. He starts running to the back of the house and Andy chases him to try to claim a bed first. Judd claims the first air plane seat. In the havenot room – Andy says this and the cockpit were scheme central. Andy and Judd go into the rainbow room. Andy finds the election hat on his bed and wonders why it’s there. He picks it up and finds a voodoo doll under it. It’s a play dough stick man of Andy with it’s eyes crossed out and a pin through its heart and a pen!s. Judd says I would take that to the diary room, that’s a threat. Andy laughs and says this is a threat. They head to the kitchen. Spencer and Judd wonder who did it. They figure it was McCrae. Andy says it’s really funny, I haven’t laughed that hard in a while. 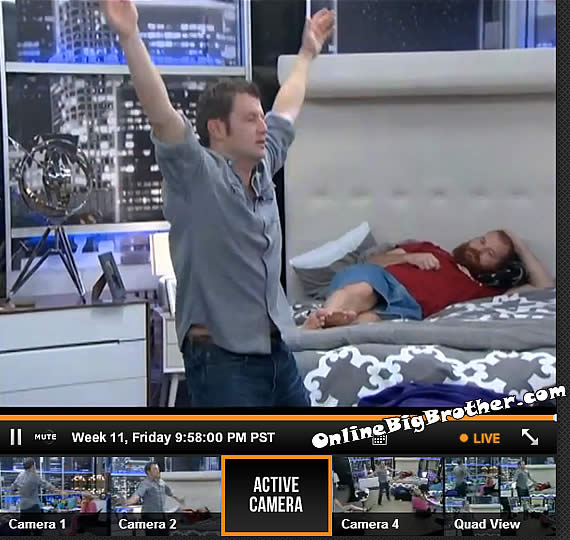 Andy – “JUDD do you wish your showmance JEssie”
Spencer – “When are they going to announce Have nots are over”
Andy thinks they can all just assume.

Spencer thinks in the past they told the house guests Have nots are over. You could always tell by the “Jubilation”

Spencer sings “Jubilation no frowning”
Andy -’It really is true that Elissa’s eyes follow you wherever you look”
McCrae – “Dude I’m telling you she’s a scooby doo bad guy”
Spencer – “100% dude”
MC – “Even the way that she acted.. not just that picture.. that picture seals the deal” (Memory wall picture)
MC – “She’s a f*** groundskeeper for the Big Brother house that could never play the game because you f*** you can’t play the game.. if you are affiliated with the game.. So she game in with a fake f*** weird mask.. A plastic filled mask that look really weird ”
Andy – “A terrifying mask”
MC – “ Ya”
Spencer- “Ya exactly” 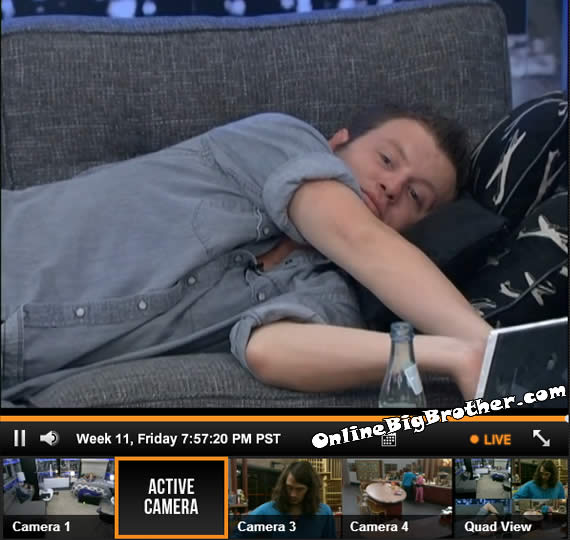 JUDD says Howard is probably cussing them out right now because they’ve finally formed a solid group.
Spencer says what happened to Howard was his own damn fault he acted too shady
JUDD says he liked Howard but never trusted him.

JUDD bets that Elissa is probably not even in the jury house she’s in some Hotel. Spencer agrees.

JUDD tells him he told Elissa that he would use the veto on her but he never intended on using it.
Spencer laughs says Eliss was worried yesterday about the double eviction and JUDD kept was telling her she was alright. 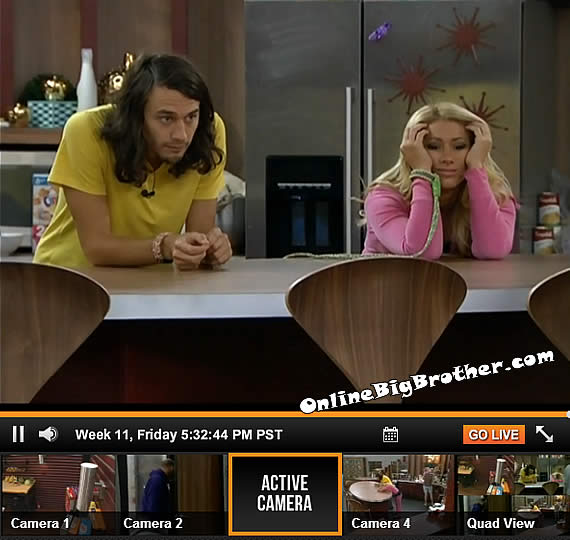 5:29pm Feeds back
Speccner apologizing for nominating them for Eviction he says if he could keep everyone in the game he would. GM says she understands she knows he has to put two people up, “It’s a dificult situation to be in”. GM adds that when winning the HOH there is always a plus and a minus. McCrae says yup. Specner invites them to come up to the HOH room.

5:40pm Kitchen JUDD and Andy
JUDD – “If McCrae goes home this week you know how Mad Amanda will be”
Andy – “Ohh my god”
Andy says he never wanted something more in his entire life they have to win the veto 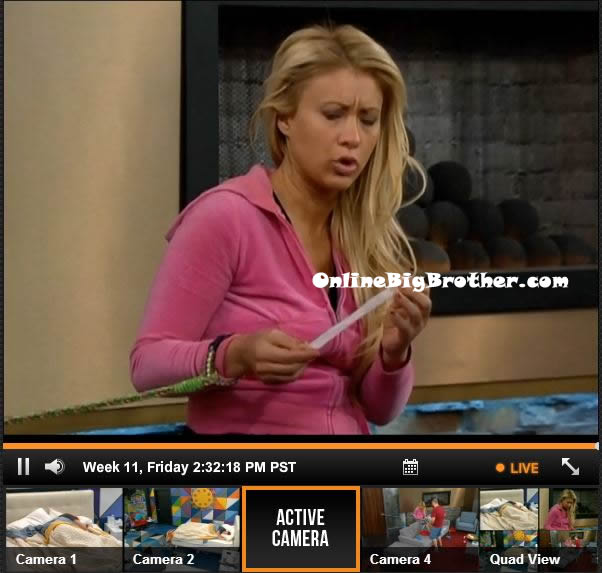 2:10pm Spencer asks Andy so if McCrae doesn’t win the veto should we just tell him about our alliance or do we not just in case there is a power in the house. Andy says he doesn’t think there would be a power this late in the game for final 5, that would be so unfair. Andy says if it comes down to it and we get to decide we should keep Judd because we could beat him. Spencer says that sounds good to me. Spencer says he is worried everyone will think he has been a floater. Andy tells him that in the end he can explain all the reasons why he wasn’t a floater. Spencer and Andy comment on how they got to this point in the game. He says he wanted one person to strategize with, which he and Andy didn’t until late in the game. He says he wanted to get in good with the girls which didn’t happen and wanted to be likeable. McCrae gets called to the diary room. Andy tells Spencer he should take this opportunity to talk to Gina now about nominations while he can. Spencer tells Andy he will not go up on the block. Andy says unless Gina wins veto. Andy says although with me off the block you know 100% what you want to accomplish will happen.

11:15am – 12:30pm The Big Brother 15 live feeds switch to TRIVIA while the house guests are on a HOH lock down. When the feeds return – Judd, Andy, Ginamarie, Spencer and McCrae are still up in the HOH room. Gina and McCrae head down to take a nap. Gina asks Spencer to wake her up if the Nomination screen comes up on the living room tv so that she can come up and talk to him. Gina and McCrae head down stairs to go back to bed. Judd and Spencer talk. Judd says man that sucks for Andy. Spencer agrees and says that Ginamarie must feel better. Spencer says that two that he picked had nothing in them. Spencer comments that Ginamarie opened up his big bottle of tea and drank it straight from the bottle. Spencer says I would never do that here being on tv and the fact that others will drink it. Spencer says I am going to put up McCrae and Gina. I will tell McCrae that I am putting him up to make others think that he and him aren’t that close. Spencer says he will tell Gina that she is safe, don’t worry. 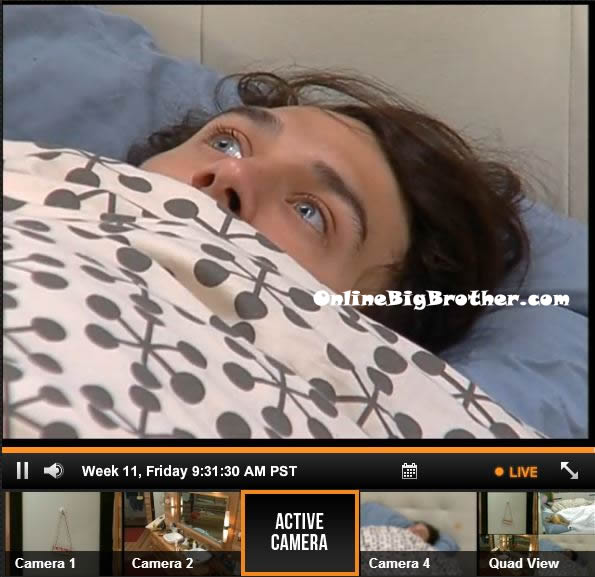 9:10am – 10am Big Brother wakes up the house guests. When the live feeds return – Judd gets up and goes to the kitchen. When he comes back he tell Gina and McCrae that they’re building something in the backyard. Gina wonders if it could be for Andy’s money reward. The whistle then blows and tells Judd to drop down and do 15 sit ups. Judd complains and the voice asks do you kiss your mother with that mouth? Judd finishes them and says this is the worst punishment ever. Judd get back into bed. Andy comes back from the diary room. Gina asks anything? Andy says yeah they had $5000 sitting out.. Big Brother cuts the feeds. 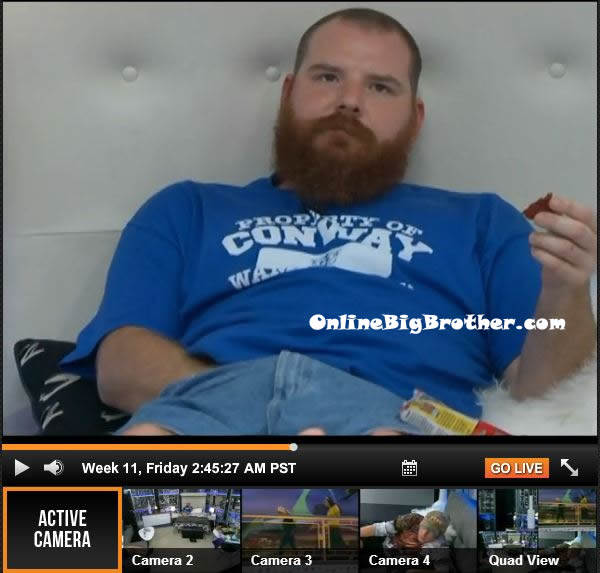 12:55am In the living room – While Ginamarie and McCrae go into the diary room to get handcuffed together. Judd asks Spencer so what’s up? Spencer tells Judd that he will nominate Ginamarie along with McCrae to keep up the boys alliance. Judd says that it sucks we can’t talk with Gina now without McCrae being around. Spencer agrees but says it’s just for 24 hours. Judd says if we don’t win that veto it is going to be hell. I am not going to feel good unless one of the four of us get it because then it will be perfect. Everything that happened today was perfect. Andy agrees. Spencer say yeah but those are the nominations, them two. Spencer says that he won the HOH fair and square. Ginamarie didn’t throw it to me. Andy says he is so glad its McCrae still here. He deserves it way more over Amanda. Spencer says I am so glad that bit*h is gone. We finally get a chance to know McCrae without Amanda.