CBS has just released its summer 2013 line up earlier than usual and there is a huge change to the première date for Big Brother 15! The 15th season of Big Brother will air its première episode on Wednesday, June 26th, 2013 at 9pm on CBS.
CBS stated that:

“Big Brother will have a longer edition this summer, premièring two weeks earlier.”

This early of a première date has never been done before as all of the past seasons have started in the first and second week of July. With the première date happening approximately 2 weeks earlier than usual it appears as though we are in store for the longest season of Big Brother ever! This could translate into having even more house guests than ever or a new twist that requires additional time to play out.

What do you think this early première date means for our favourite summer reality TV show? Tell us what you think?

Another interesting fact about the première date is that it falls on a Wednesday which is different from the usual programming. CBS has announced a new programming schedule for Big Brother 15 which will have the TV episodes air on Sunday @ 8pm, Tuesday @ 9pm and the Live Eviction TV episode on Wednesdays. The first live eviction will air on July 3 at 9pm. Also announced is that the first 3 live eviction Wednesday night episodes will air at 9pm and starting July 17 they will air at 8pm. This format of having the episodes air on Sunday, Tuesday, and Wednesday was last used on Big Brother 9 back in 2008.

Speculation/Theories:
So instead of the usual 75 days in the house it will be more like 90 days (3 full months). I wouldn’t be surprised if they brought back the 1 million dollar grand prize they had in BB6 (it was a conditional 1 mil if both pairs made it to the end which didn’t end up happening). They could market BB15 as the Biggest Grand Prize, Biggest Cast, and the longest Season EVER…

Since the finale episode will be on a Wednesday to coincide with the regular eviction night the Big Brother 15 finale will be one of the following options:

IF you think you have what it takes to compete for half a million dollars, then APPLY before the May 11, 2013 deadline! 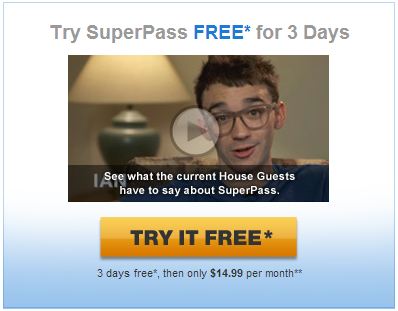 I hope it means that there will be more drama with HUGE twists that have to play out….would be great! But, either way, two weeks more of Big Brother is welcome in my book…..I wish it were on all year round!!!

I totally agree with you! I wish BB was all year round too! Thankfully we will have BB Canada and BB15 this year! I am really hoping that this season will be an all new cast and considering its going to be two weeks longer there will probably be 16 or more house guests! Can’t wait for the BB madness to begin!!!!

can we watch bb candan in usa?

Dawg, any word on if BB Canada will have 24 hour live feeds?

Still no word yet :( I’m hoping there will be 24/7 live feeds but its still too early to tell. One thing that is a little disturbing and now has me wondering is that the statement (below) about the live streaming originally found on the BBCA facebook page has since been removed. So your guess is as good as mine whether or not they have 24/7 live feeds. Best guess is that the live feeds will be limited to a select number of hours. I for one surely hope that isn’t the cast as the popularity of the show depends on the 24/7 feeds.

Does anyone know if BB Canada will be viewable to those in the US?? Like on video brother?

Don’t worry you will be able to watch the episodes either live streamed or after the fact when they are posted on youtube. We will even try and post the youtube videos here for you to watch.

Cool. I would love to be able to see BB Canada. I’m happy about the earlier premiere date for BB US too! All good news!

If they put together a good cast. . . . . it could be GREAT. Last season really was a pretty good one. . . . It’s so good to hear from y’all Dawg and Simon, did you not make it into the Canada House? I so hoped you would. I’d have LOVED to see you write about that. <3

Nope I didn’t make it into the BBCA house .. it would be pretty tough for them to cage this dawg… besides who would help Simon with all the spoilers :)

FYI we’re upgrading to the disqus commenting system for this site… there was one glitch and the last 10 posts temporarily lost their comments. They will be coming back.

I can’t deal with returning hgs anymore on BBUSA i going have to stop watching, BB CANADA will only have new hgs.

I hate bashing my BBUSA but the entire show needs a reboot? of sortas each week you know what is going to happen from how the voting is done, the show format is edited, etc. CBS never wants to change anything but add stupid twists which never work.

I totally agree about the returning houseguests..

I think when it all comes down to it the 8 million or so TV viewers probabaly like seeing returning houseguests whereas the 500K (Mostly feed watchers or die hards) want to see new people. CBS will go where the majority is.

I have a gut feeling that the public will have a say in some capacity who enters the house this year. For example there will be 8 people chosen by CBS and 6 by the fans out of a possible 10. .. I don’t know just a thought.