Big Brother 5 aired on the CBS network and ran for thirty-one episodes from July 6 to September 21, 2004.

Season 5 was advertised as “Project DNA” and also as “Project Do Not Assume” of which there were two aspects to the twist. The first part of the twist was that two of the house guests Nakomis and Michael were unknowingly half-siblings. It was revealed to them and the other house guests that they were half-siblings during the second week within the big brother house. The second part of the twist was that there were a pair of identical twins (Natalie & Adria) in the house that would periodically switch places every few days and appearing as Adria to the other house guests. In the beginning it was announced that both Drew and Diane had identical twins that were not a part of the game. If the twins Adria and Natalie successfully lived in the house without being discovered by the other house guests by week 5, then they would be able to both live in the house to compete for the grand prize. The twins managed to evade detection by week four when the HOH Drew nominated Adria as the replacement nominee. The host of Big Brother Julie Chen informed the other house guests of Natalie following the eviction of Scott. Before the discovery of the twins, some of the house guests suspected that Holly had a twin that she was switching places. The house guests suspected her because of a comment she had made in the house. Holly refuted that by saying that “there’s only one Holly in the world!” 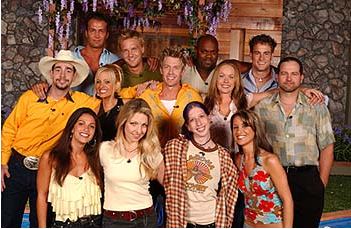 The golden power of veto rules were changed slightly for this season to increase the likely hood of it being used, by only allowing 6 house guests to compete in the veto competition. The 6 house guests able to compete were the two nominated for eviction, the head of household (HOH) and each of them getting to pick another house guest.

Also during this season was the use of a new strategic move known as “back-dooring”. Back dooring is when the HOH nominates two house guests as pawns with the intention of replacing one of them with another unsuspecting house guest seen as a threat. The premise is that the HOH and the two nominated house guests work together; they individually chose veto players that will use the veto if they were to win it. In doing this, the unsuspecting house guest seen as a threat is not given the opportunity to participate in the power of veto competition. The house guests then compete for the veto and use it to replace one of the nominated house guests with the common threat, therefore, not allowing the threat a chance to save themselves. The house guests then all vote to evict the common threat from the big brother house. The use of the back dooring tactic has greatly changed the way in which the game is played.

In this season, the “Four Horsemen” Alliance (Drew, Jase, Scott, and Michael) had the run of the house dominating the other house guests for a number of weeks up until Diane won HOH. As HOH, Diane tried to get Jase evicted from the big brother house, but she failed when he won the POV and used it to take himself off the block. The following week, Jennifer won HOH and devised a plan that from that day on became known as “back dooring”. Jennifer called this plan the “six finger plan” when she first thought of it. Jennifer nominated Marvin and Diane as pawns for eviction with the intention of replacing Jase with one of them. Drew won the power of veto and he then used it to remove Diane from the block. As HOH, Jennifer then nominated Jase as the replacement nominee. Prior to being nominated, Jase had already figured out what was happening, but by that time it was too late. Ellis and Michael told Jase that he got “bit*h slapped.” By a vote of 6-1, Jase was evicted from the big brother 5 house. Later in the season another back dooring attempt was also successful when Diane back doored Karen.

Another twist during this season was also added called Big Brother Fast Forward / Double Eviction. Near the end of the season Diane, Michael and Drew teamed up to get Michael’s half-sister Nakomis evicted. Michael’s vote was the deciding vote that ultimately got Nakomis evicted from the big brother 5 house. Drew then won the final HOH competition and instead of taking his girlfriend Diane to the final he stayed true to his alliance with Cowboy and evicted Diane. Diane left in a flood of tears as she assumed Drew was taking her to the finals, however Drew believed she would have the votes over him and decided to evict her to increase his odds. During the jury votes, Diane cast the deciding vote for Drew to win by a vote of 4-3.

Three of this season house guests were chosen by producers and the public to return to the big brother house for Big Brother All-Stars. Also during Season 5 was the introduction of the internet web show called “House Calls” which aired during the week for the entire season. The show had views call in to ask questions and also aired interviews with evicted house guests.