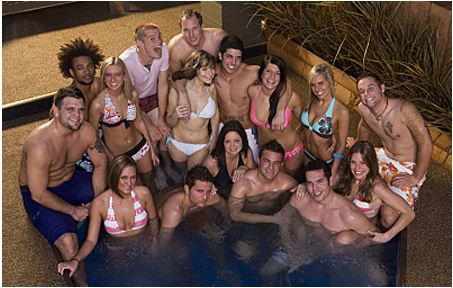 Season 9 was the first season to ever air during the winter months which was due to the lack of programming options because of the 2007-08 Writer’s Guild of America strike. In addition to that this was also the very first season to be promoted without the year or season number. The CBS producers also cast 16 house guests to enter the big brother house which is more than the usual 13-14. This was the first increase in the number of house guests since Season 5.

During the season two previously evicted house guests were also brought back into the game. Due to Neil voluntarily leaving the Big Brother house because of an urgent personal matter, Sharon was brought back into the game to replace him. Also on day 35, James was also given the opportunity to return to the big brother house by a vote from the other house guests. Big Brother After Dark also returned for this season airing 7 nights a week on Showtime 2. This season’s twist had the entire house guests paired with their soul mate. As soul mates the pairs of house guests won and shared the responsibility of the Head of Household (HOH), Power Of Veto (POV), in addition to being evicted in pairs. A secondary twist of the season had the house guests vote on which of the house guests to be evicted during weeks 1-4 to return to the big brother house.

The Big Brother 9 house had a theme of the outdoors with the dining room and kitchen walls covered with logs in addition to bright yellow and red coloured furniture. The head of household room was that of an exotic oasis with the head board of the bed made from a surf board, Hula girl lamps, Polynesian carvings and a rattan carpet. In one of the other bedrooms in the house the shelving, chests and beds were made to look like rowboats. In another bedroom the beds were made of tree branches and pink bead spreads. Also new for season 9 was the “spa room” complete with a message table and a 2 person sauna.

In the first 3 weeks of Big Brother 9 the house guests competed as pairs, where each pair voted and made decisions together, in addition to also being evicted together. If the HOH pair was not able to agree on who they should nominate, then they would be nominated and the HOH runner up pair would become the new HOH. In the event that the power of veto winning pair was unable to decide to use the POV or not, then it would not be used. Also if a pair was unable to decide who to evict then that couple would be evicted instead. During week 1 the big brother 9 house guests competed in pairs in the “Falling for You” competition, where Parker and Jen won $10,000. In the power of veto competition called “Colour of Veto” Ryan also won $10,000 and Adam won a motorcycle. On day 43 the house guests were treated to a luxury competition where Sharon, Chelsia, Sheila, and Joshua won a screening of the film “21”. On day 44, Evel Dick Donato from big brother 8 returned to the big brother house to host the power of veto competition called “Club Evel”. In this competition if one of the house guests scored more than Dicks score of 33 from his season that house guest would win a Gibson Les Paul guitar and amplifier. None of the house guests beat Dick’s score so Evel Dick won the guitar and amp. A day later, on day 45, Chelsia also won a VIP Las Vegas $21,000 trip from a popcorn bucket that had a golden ticket in it. On day 71 the house guests were treated to their second luxury competition where Sharon & Ryan won a VIP advanced screening of the film “What Happens in Vegas”, opportunity to meet the cast and a shopping spree in Hollywood.