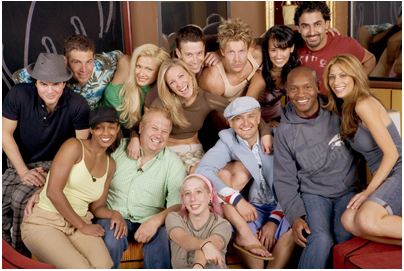 The viewing public was able to vote online for 6 of the potential house guests and the CBS production team would chose the remaining 6 house guests. The top 3 males and top 3 females that received the most votes by the public would be chosen to participate in the All-Stars season. However, during the premiere episode the host Julie Chen revealed that because of the overwhelming viewer response the producers had decided to pick the top four males and females from the voting process. There were also six other house guests that did not receive a large enough of the majority votes to be a part of the All-Stars season. Among the house guests not chosen to participate were: Monica Bailey, Bill “Bunky” Miller, Michael “Cowboy” Ellis, Dana Varela, Lisa Donahue, and Ivette Donahue.

Big Brother 7 All-Stars House:
For Big Brother 7 All-Stars the theme of the house was “A House of Extremes”. Throughout the house the theme was shown through the use of gothic features like gargoyles, neon flames in the lounge, and a tarantula cage in one of the bedrooms. The house guests also got a pool table for the first time, which has remained in the house since. On the walls throughout the house the following words and definitions were painted: Loyalty, Honesty, Deceit, Trust, Love, Hate, and Alliance. The house also had previous seasons artifacts hung on the walls such as, Hardy’s toothbrush (In Season 2, Sharon had scrubbed the toilet with it), Ringer Washing Machine from Big Brother 1, Macellas’s Power of Veto that he didn’t use in Big Brother 3, Marcellas’s Gnome Boo, the mime’s shirt from Big Brother 4, the X-Factor Statue from Big Brother 4, A portrait of Adria representing Big Brother 5’s twist, pieces of Jase’s piggy bank from Big Brother 5, Howie Gordon’s Starwars light saber from Big Brother 6, in addition to the nomination keys from each of the previous seasons winners.

This was also the first season the a new twist was introduced called the Big Brother Coup D’etat. During the August 4th episode the Coup d’etat was introduced, which allowed the holder the power to over throw the Head of Households (HOH’s) nominations and nominate 2 other house guests for eviction (Not including the Power of Veto Holder or the HOH). Mike “Boogie” Malin won the Coup d’etat power and had 3 weeks to use it, however at the end of the first two weeks he had chosen not to use it, and in the third week he was HOH.

Week 1 – In the HOH competition called “Falling Stars”, both Janelle and Jase won and were crowed the co-HOH’s for the week. As HOH they nominated Alison & Danielle for eviction. During the Power of Veto competition called “One Man’s Trash is Another Man’s Veto” Janelle won and at the veto ceremony she chose not to use it. As there were two HOH’s, if they did not agree on who to evict and on how to break a tie, then the Power of Veto holder (Janelle) would break the tie. On day 11, Alison was the first house guest evicted from the big brother house.

Week 2 – In the HOH competition called “Alison Rules” the house guests were asked true/false questions about the first evicted house guest Alison. At the end of the competition, Kaysar had correctly answered the questions correctly and was crowed the HOH for week 2. Following Kaysar’s win, fellow house guest Howie Gordon began running around the backyard yelling and screaming in celebration, which prompted James to tell Howie to “clam the fuck down!” As HOH, Kaysar nominated Nakomis and Diane for eviction, following through with his plan to weed out the floaters. In the food competition called “Slop Till you Drop” the winning team was George, Diane, Jase, Mike, Erika and Will. The losing team were the very first recipients of having to eat slop for a week. During the power of veto competition called “Big Brother Golf Classic” Erika was the winner and in the veto ceremony she opted not to use it. As a result Nakomis was the second house guest evicted from the big brother house.

Week 3 – In the HOH competition called “Pay Attention” the house guests were asked multiple choice questions about photos from the first two competitions. James correctly answered the most questions right in a row and won. As the HOH, James nominated Will and George for eviction. In the food competition called “Balanced Diet” the house guests were divided into pairs to win catered meals. Will and Danielle won vegetables, bread, beer, and Kumquats. Janelle and Marcellas won vegetables and beer. During the Power of Veto competition called “How Bad Do You Want it?, George proved he wanted it the most by agreeing to eat slop for 60 days, forfeiting the chance to play in the following weeks POV, shaving his head. In the Power of Veto Ceremony George used the veto to safe himself from the block and James subsequently nominated Jase as the replacement nominee. On day 25, Jase was evicted from the big brother house by a vote of 9-0.

Week 4 – In the HOH competition called “Define & Dismiss” Janelle won by correctly answering the definitions of the words written on the walls in the big brother house. During the food competition called “Food Fight”, James, Mike, Danielle, Howie and Kaysar won food for the week, while the others had to eat slop. As HOH, Janelle nominated Mike and Erika for eviction. In the Power of Veto competition called “Torture Test” Mike won by correctly reading words backwards while being subjected to torture devices like night crawlers, blaring music, blindfolds, etc. The house guests were treated to a Luxury Competition where James, Danielle, Janelle, Diane and Will won a screening of the movie “Talledaga Nights”. Mike also got to watch the film as he was unable to compete in the luxury competition due to an injured foot. In the veto ceremony Mike used the veto to take himself off the block. As a result Janelle nominated Diane as the replacement nominee. After voting, Diane was evicted from the big brother house by a vote of 7-1.

Week 5 – In the HOH Endurance competition called “Caught in a Web” Danielle won by hanging in a rope web for longer than the other house guests and by promising not to nominate Howie or Erika. In order to entice the house guests to drop from the competition, big brother offered five eggs to the first five house guests to drop. Three of the eggs had prizes and two were rotten eggs. After only 15 minutes Will dropped only to get a rotten egg. The other rotten egg was won by Kaysar. James dropped and his egg allowed him to nullify one house guests eviction vote. Mike won $10,000 from his egg, Marcellas won a slop pass (which he gave to George). In the power of veto competition called “Grave Mistakes” Janelle won by bidding on only punishments. Danielle was pissed at her alliance as Boogie, Will, and James bid on rewards for themselves rather than trying to win the veto. At the veto ceremony Janelle used to veto to save herself from the block. As a result Danielle nominated Kaysar as the replacement nominee. On day 39, Kaysar was evicted from the big brother house by a vote of 5-1.

Week 6 – In the HOH competition called “The Ghosts of Big Brother Past” was won by Janelle. Following the HOH competition the house guests were informed of a new power that they would compete for called the Coup d’etat. In this week’s food competition called “Big Brother Bakery” the house guests had to make 7 different slop recipes. They succeeded and all the house guests won food for the week. As HOH, Janelle nominated Erika and Danielle for eviction. During the Power of Veto competition called “Anything You Can Do, I Can Do Better”, Danielle won. As a result, Danielle used the veto to save herself from eviction and Janelle nominated Marcellas as the replacement nominee. Prior to the live show Mike was informed privately that he had won the Coup d’etat power. On day 46, Marcellas was evicted from the big brother house by a vote of 6-0.

Week 9 – In the HOH competition called “Big Brother Bowl” Mike won. As HOH, Mike nominated Erika and Janelle for eviction. During the power of veto competition called “When the Stars Align” Janelle once again won it, which made it her fifth POV of the season. In the power of veto ceremony Janelle used the veto on herself and as a result Mike was forced to nominate his friend Will. On day 65, with Janelle being the only house guest to vote, voted to evict Will. Erika stated in her goodbye video message that the “jig was up”, that she found out about being played by him and Mike (“Operation Double Date”). Following the eviction Erika and Janelle high fived and she said “Who’s the bunny now, Bit*h?!” (Will had said throughout the season that he was the fox and she was the bunny.)

Week 10 – In the HOH Endurance Competition called “Mount HOH” the house guests were required to stand on a post while holding onto their keys above their heads. During the competition Mike told Erika and Janelle that they made the best move evicting Will. Mike then asked the host Julie Chen whether she remembered Richard Hatch from Survivor. Mike explained to Janelle and Erika that they both needed to take him to the final two because of how unpopular a player he is with the other jury members. Mike then let go of his key and jumped down off his post. In the confusion Janelle had turned to look at Mike and let one of her hands go from her key. Julie Chen then told her she was eliminated and Erika won the first part of the three part HOH. The entire HOH endurance competition only lasted 5 minutes and became the record for the shortest endurance competition. In the second part of the three part HOH, Mike won in addition to winning a convertible Pontiac Solstice which he planned on giving to his mother. In the third part of the three part HOH, Mike won and as the winner of the final HOH he evicted Janelle from the big brother house.