The Canadian television network Global has released a few new Big Brother 16 commercials to promote the new season of big brother that premieres on June 25th, 2014. The première will be a TWO-NIGHT PREMIÈRE event with the first on Wednesday, June 25th and the second on Thursday, June 26th. In the new commercials there isn’t any new information released about the season, however, we expect the photos/video of the newly re-designed Big Brother house to be released around Monday, June 16th. In addition, we expect that the new cast of big brother 16 will be released around Wednesday, June 18th. 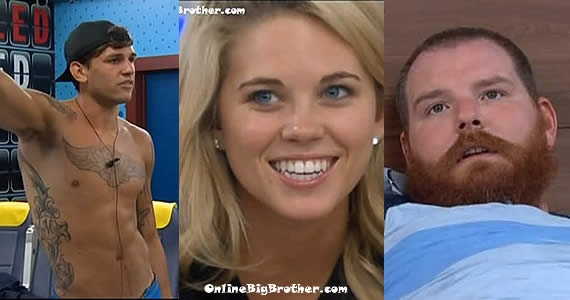 Who is going home?

Jeremy pissed the majority of the house off and was backdoored. You can’t steam roll through the house being an A$$ to the one player that gets special powers every week. Jeremy was a douche to many people and a big threat no surprise he’s nominated. Once the Power of Veto was played last Saturday it become more or less a given Jeremy was going up on the block and going home. A last ditch effort in the wee hours gave Helen and Elissa a convincing argument for keeping Jeremy but in the end it was turned down. Helen and Elissa know they don’t need Jeremy in the game to win HOH for them. They have Elissa winning MVP it’s much better. 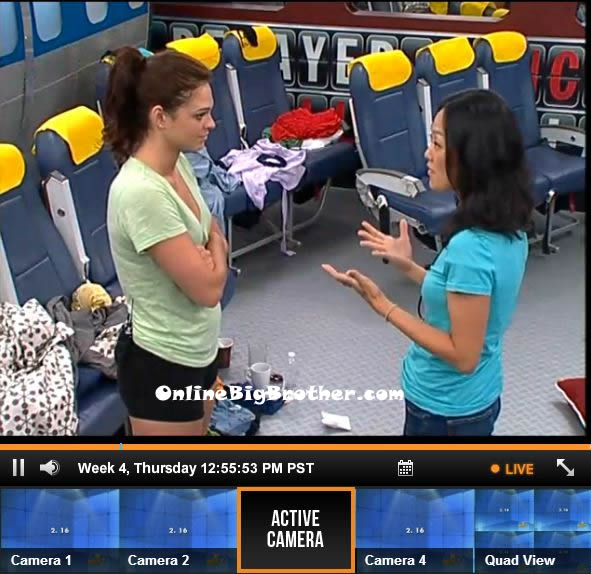 12:50pm Big Brother switched the live feeds to the TRIVIA screen for the HOH lock down. When the feeds return, the girls are in the bathroom getting ready. Jessie is mad and complaining about how someone took her hairspray and she can’t find it. She says she doesn’t care, just ask! Candice tells her to look behind the baskets. Jessie finds it. Candice says are my cigarettes back there? Andy comes out of the lounge and says I heard you found it? Jessie says yes. Andy says so mystery solved, you were playing the blame game. Jessie says well someone definitely used it because it is half empty. McCrae comes in and says he is wearing the bear shirt tonight. Candice says that shirt gets around, its a wh*re! Amanda says like me! They talk about being havenots. Amanda thinks because they didn’t end havenots last night they will have a have/havenot competition tomorrow. Andy says he hopes it’s a fun competition. 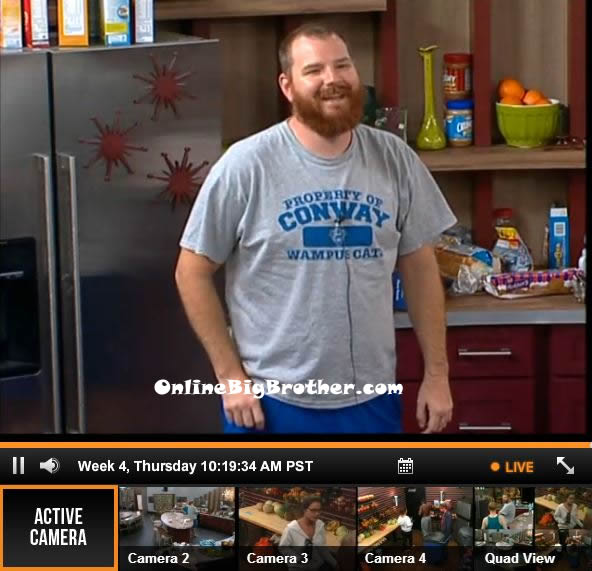 9:30am – 10am All of the house guests are still sleeping except for Helen. She gets up and gets dressed to do her morning run. She then heads downstairs and sits in the lounge room looking sad. She then starts her morning run from the bathroom to the living room as they are on an indoor lock down for tonight’s live eviction episode. At 10am Big Brother switches the live fees to the we’ll be right back screen to wake up the house guests.

10:15am When the feeds return – Andy, Judd and Spencer are in the bathroom waking up. Andy says that it chills my spin walking in the bathroom with no shoes on. Spencer asks if he would do the 5 second rule if he dropped some food on it. Andy says oh hell no! Andy says that he is going to send Gina into a tail spin tonight and write “I love Nick Uhas!” Andy says everyone’s being lazy today. It’s 10am, GET THE HELL UP! Andy goes to see if he can hear Big Brother working in the backyard on their competition set up. 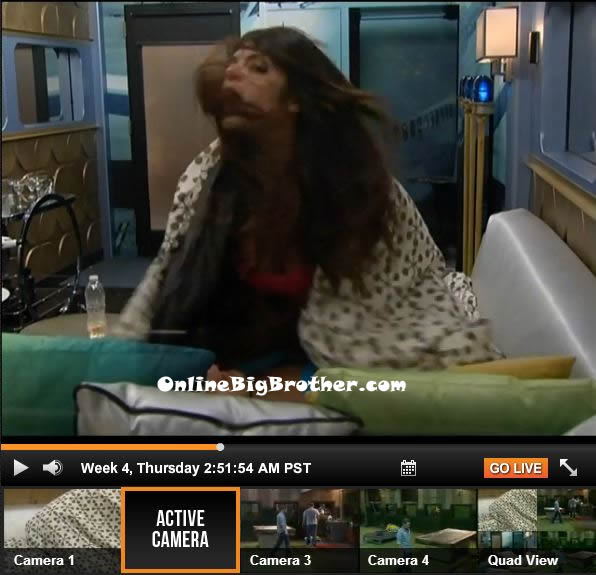 12:30pm Out in the backyard – Andy, Candice, Aaryn, Judd, Howard and Gina are talking and joking around on the couch. Spencer says he has a speech that will knock your socks off. Judd says his speech should be “To whom it may concern, fu*k all of ya’ll” Aaryn says that she doesn’t know what she is going to say. Candice asks did anyone else hear Andy’s would you rather? She says would you rather, either when you are nominated all you can say is “I am addicted to internet p*rn” or everytime you compete in the HOH competition your pants fall down and you have no underwear on. Judd quickly says internet porn. Aaryn says pants fall down. Howard says pants fall down. Aaryn says I am not ashamed of what I am working with. Gina says I actually am addicted to internet p*rn so I would go with that. Andy says yeah me too. Aaryn says how much time do you look at internet p*rn? Andy says sometime it takes a few minutes, sometimes it take longer. Howard says yeah sometimes it takes a few minutes, sometimes it takes hours. Candice asks HOURS? Howard says yeah. 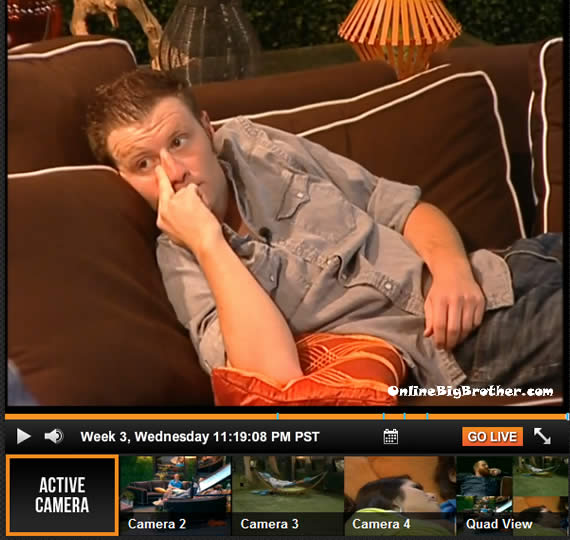 10:41pm backyard couch Spencer, JUDD and Andy
Talking about the HOH competition tomorrow. Spencer thinks it’s going to be a quiz. They start talking about double evictions. Spencer’s theory is the first 2 jury members will go home back to back, :Which will obviously be Amanda and McCrea”
Andy: ”YA”
JUDD: “I’m confused are they together together”
ANdy: ‘I don’t know”
Spencer: “I don’t know either.. they seem like an odd couple”
JUDD thinks they are together. Andy says double eviction he will put both Amanda and McCrea, “Now that I know Jessie and JUDD are in a showmance maybe I should put them up”
JUDD is pissed that people said he was in a showmance he doesn’t think he is. 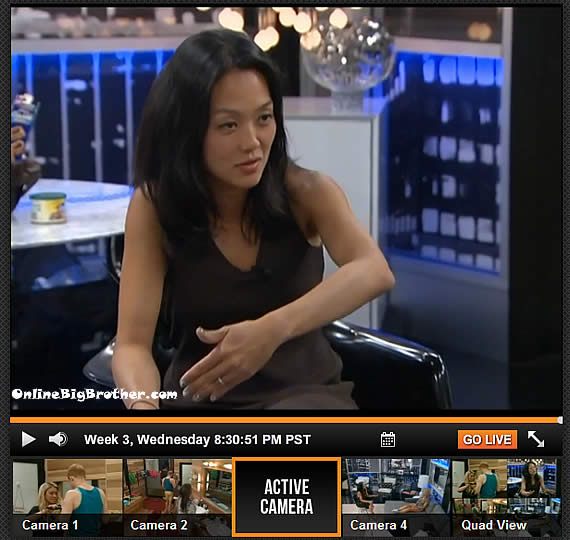 Aaryn swears that she’s never said anything about putting Helen and Elissa up.
Helen: “OK thats all I want to hear from you OK.. I think you’re strong and can win HOH OK.. I don’t obviously want to make a mistake this week…. but if you win it I want to be happy that you won because I’m not going up and neither is Elissa.. you know what I mean”

Aaryn says why would she do that she doesn’t have any numbers to get them out. Aaryn starts to whimper says that the two people she thought were her friends are telling lies about her. 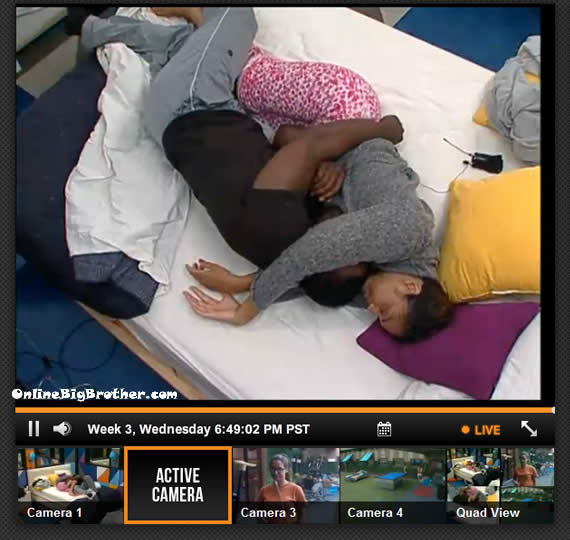 6:33pm Bedroom Candace and Howard
Candice tells him not to tell Spencer everything she tells him, “I don’t trust Spencer like you do”
Howard: “OK”
She brings up that Jeremy met with her and apologized.
Howard for you
Candace: “Being a douche bag”

Candace: “The carpet matches the drapes.. umm I don’t really have carpet”
Howard: “What you talking about?” they giggle
Candace: “I love penguins.. they mate for life.. the male brings the women a Pebble”
Howard: “You talking about happy feet”
Candace: “Go get me a pebble” 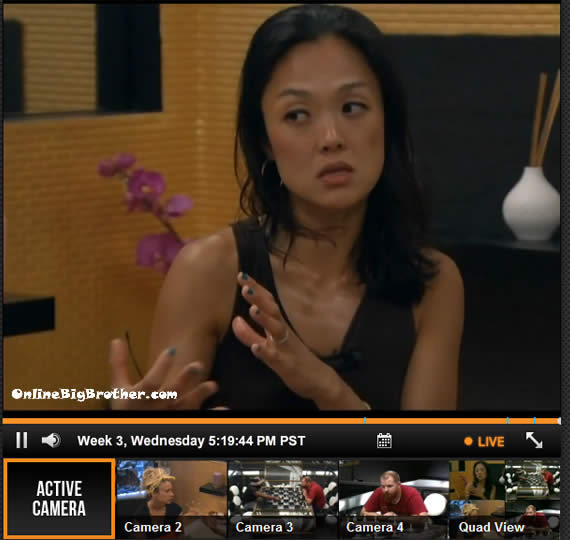 Helen tells her that the best play is for her to take out Aaryn next week so that she can join the superfriends. Helen points out that unless she does that Gina runs a big risk being sent home the following week.

Helen starts explaining to Gina that with Jeremy going it’s going to help her game because it will give everyone a chance to win HOH. Helen says it’s such a wonderful feeling to win HOH she wants everyone in the house that isn’t targeting her to experience it.

Helen says that the other girls Gina’s been hanging out with are no good for her they bring out the bad in Gina. Helen thinks that once