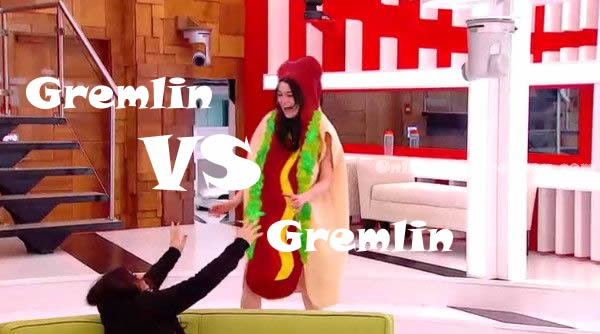 The Big Brother Canada season is nearing it’s final leg. At this stage competition wins are paramount. Two big plays are possible one to get Jon/Neda out or Neda and Jon turning on Adel/Heather before Sabrina.

Jon and Neda continue to make deals with everyone in the house, All their bases are now covered (At least on paper). Heather and Adel seem to fine with their original final 4 plan but Jon/Neda fearing betrayal are going to try and use Sabrina to take them out. (Players doing the majority of the betraying are the ones always worried about being betrayed themselves). 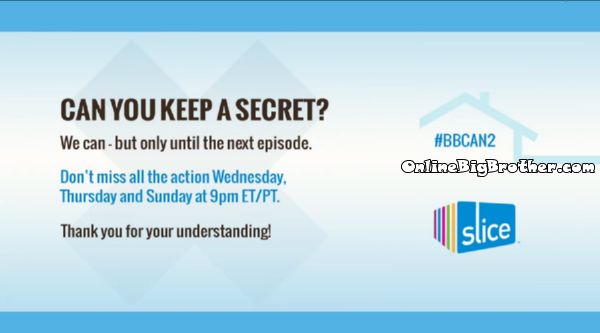 During Thursday nights show Arlie Shaban was the first Jury member and Neda won the Head of Household. Big Brother Canada Tweeted out that the feeds will be down starting Friday morning until Sunday after the show. THis is because there is a instant Eviction going on in the house over the weekend. Feeds will […] 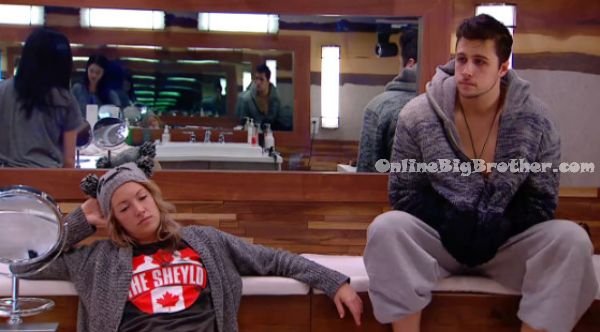 9:15am Big Brother wakes up the house guests. Jon says that all night he kept looking to see if Neda was back. Jon wonders what could be happening out in the backyard – He says maybe an HOH, Punishment/Reward or Have/Havenot competition. Adel says or an instant eviction. Jon says it could be something where she (Neda) has to make a decision completely on her own without talking to anyone else. Rachelle asks Allison and Sabrina what they think is happening. They say have/havenot competition. Rachelle comments on how Jon was sleep talking last night. Adel says he didn’t hear it. Rachelle says you were talking to him. Adel is confused and doesn’t remember talking to him. Jon says the he had a dream that pandora’s box was opened and Neda & I went into it and we switched bodies and had to come out and I had to pretend to be Neda. We needed to successfully complete our task. Rachelle asks why would there be another HOH? 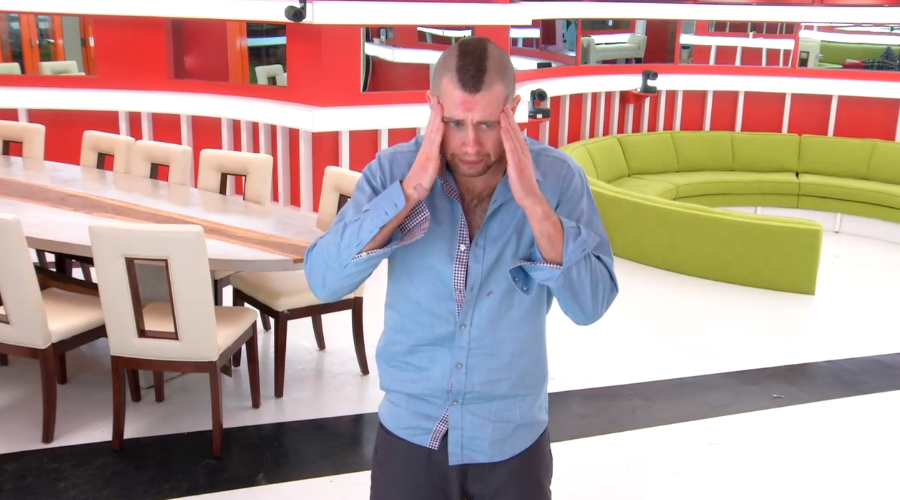 Tonight Arlie and Adel are on the Big Brother Canada chopping block. Arlie tried very hard to stay in the game and almost was able to pull it off with the gremlins and Allison. Unfortunately those looking for a HUGE turn of events will most likely be disappointed. It’s highly doubtful that Arlie will stay. As for the power blocks left in the house you have a real mesh of fake/real alliances. EVERYONE is in an alliance with everyone else Most are fake. 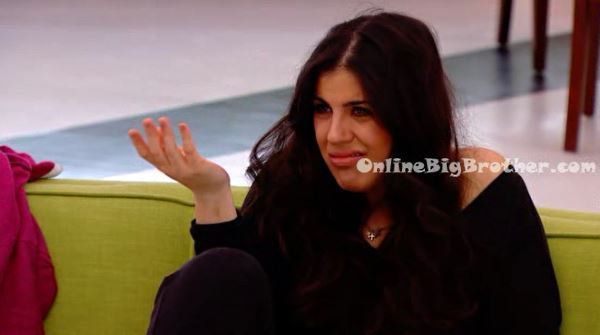 12:15pm Sabrina thinks Arlie took a bite out of the burger she made for Rachelle to eat when she’s off slop. Sabrina goes around the house and everyone denies it was them. Sabrina says it had to have been Arlie. She says he should get a penalty vote against him for eating while on slop.

In the bathroom – Adel hugs Allison and kisses her on her forehead. He tells her thank you so much. Allison asks for what? Adel says I just don’t want to go home. Allison asks so I shouldn’t be sketched out that you’ve been chilling with Arlie. Like he isn’t feeding you some plan that’s scary. 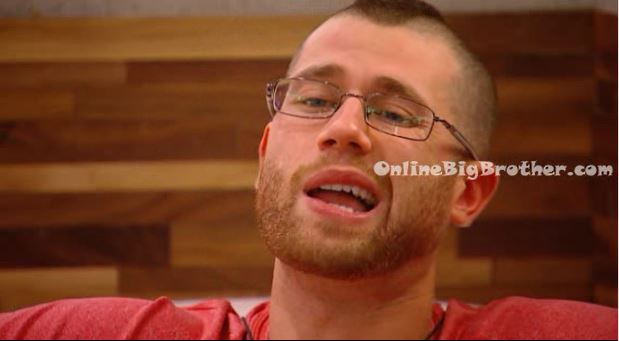 8am Arlie is awake and showering. After he finishes showering comes out n@ked covering himself and walks out of the bathroom. He heads down the stairs, past the living room, through the kitchen and out into the backyard where he gets dressed by the pool. He then starts practicing his speech “Sitting on the block next to your brother is something you never want to do. Been a fan of this show since I was a little kid and I can’t believe I got the opportunity to be on it. This has been the most coolest experience of my life. It has been the most emotional roller coaster I could ever describe. Just want to say thank you to all the fans for making this experience what it is. Thank you Arisa for looking so gorgeous every night we get to see you! 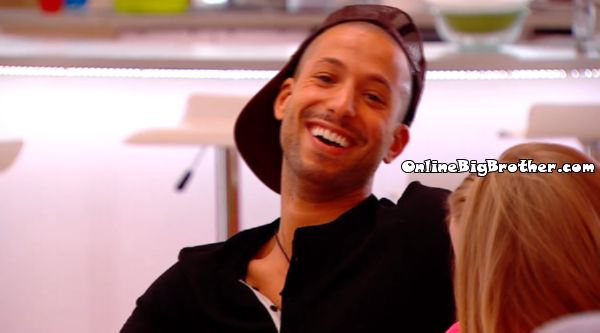 10:53pm Adel and arlie
Arlie says NEda is so two faced in the diary room, he can tell how she’s been with him. Arlie – “She potu the hit out for me bud”
Adel – “Oh I know it was”

Adel tells him he has two options
Option 1 If he wins HOH we can take out Jon right away the girls on both side will fight .. Allison will stay with the gremlins and he’ll stay with Heather and NEda

Arlie – would you put him up right away
Adel – Ya
Arlie – the only way Jon is going home is if he doesn’t win Veto. 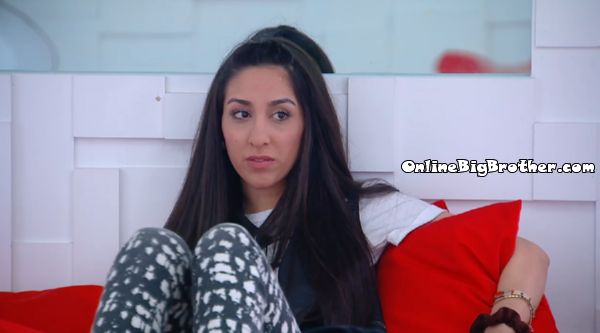 8:30pm Bedroom NEda, Arlie and Jon
Neda and Arlie agree it’s possible the gremlins are going to make the final 2.

Arlie – “Jon F** his game completely by doing this to me”

Neda says that Arlie would have taken Jon out first chance he had. Arlie says he would never had taken Jon out 5th
Neda doesn’t believe Arlie she thinks he’s only saying that to make Jon feel stupid for doing what he did. If Arlie had the chance he would have taken Jon out 6th or 7th. Arlie tells her there is no way he would have done it this early in the game.
Arlie – “I think Jon is f*** now.. I’m not saying that to make him feel bad I literally think he’s f***d . I think he f*** mine, his and Deli’s game by doing this.. that’s just the way I see the game going ”
Neda – ‘Cool’ 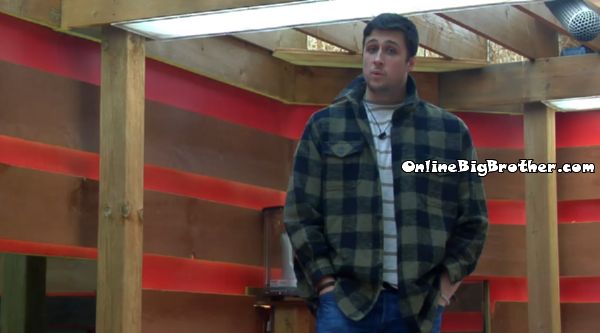 Sabrina says she was really back and forth with keeping Arlie because she thought it would have been a really cool game move.

Jon keeps saying that Arlie wants to work with him if he stays. Neda agrees to all Jon’s points.
They agree Arlie’s timing was off if he had waited a day before he started his campaigning he would have probably stayed. Sabrina says she doesn’t want them to screw her over that is the one thing she’s worried about. Sabrina mentions that Big Brother might save Arlie and he knows it that is why he’s acting the way he is. 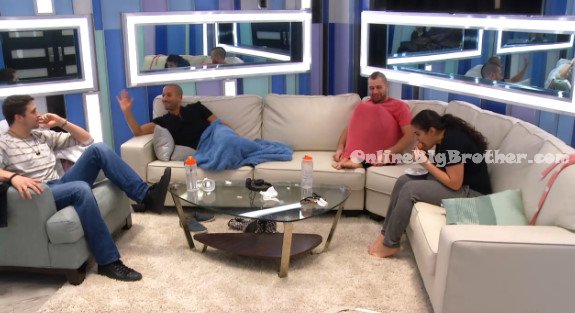 2:25pm Jon talks to Arlie in the bedroom. Arlie talks about how it hard to be exiled .. I know I’m doing it to myself too. Jon says I know if you had the votes you would be throwing it in our faces saying F**K you guys I’m coming after you! Arlie agrees and says yeah if I had them I would and the fans would love it.. but I know I don’t have the votes. Jon says you should just put everyone on slop. Arlie says I wouldn’t just in case there was a hope I would stay and some times its that person that gets punished.. like a vote against me. That happened once. Jon tells Arlie that he really is a great guy, you really are. Jon leaves. Arlie says to himself.. you’re working hard for that vote. Jon heads into the bathroom where the girls are still doing their nails. Neda comments on how she thinks Arlie is brewing something. 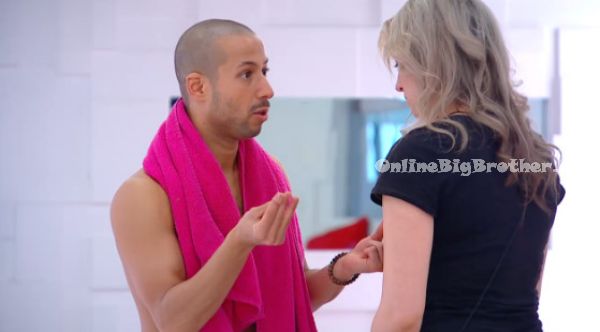 12:10pm In the bathroom – Heather has been cleaning most of the morning. Meanwhile in the living room – Jon tells Sabrina in the backyard that it is tripping him out that she might not follow through with the plan to get rid of Arlie. Jon says it is the ultimate show of trust. Jon says do not f**k me. Sabrina says tells Jon she’s voting out Adel. Sabrina heads out to the hot tub room. Rachelle joins her and Sabrina says I feel like we need to get rid of Arlie. Rachelle says okay, I don’t care. Sabrina says I think it is just less dangerous. You never know what he could come up with. Rachelle agrees and says he’s a plotter. Sabrina says Jon said if we keep Adel it will be the ultimate loyalty and he will never go against us. Sabrina says it will be easier to get rid of Jon and Neda.. I think that Allison has a three with Neda and JOn and that’s why she does whatever they say. We need to have a three with Allison.