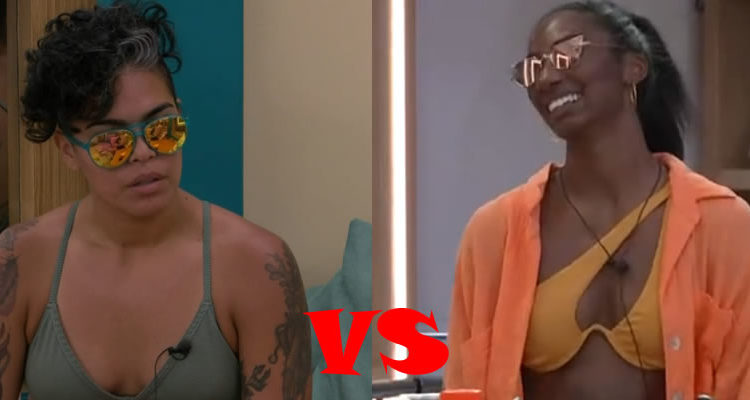 Another great week of Big Brother comes to a close. If this season keeps up I may have to retire the KRAKEN. It started off with Monte winning the Head of Household and nominating Indy and Alyssa. At first, the target was Nicole or Daniel. The Power of Veto was played and Daniel/Kyle pull out […] 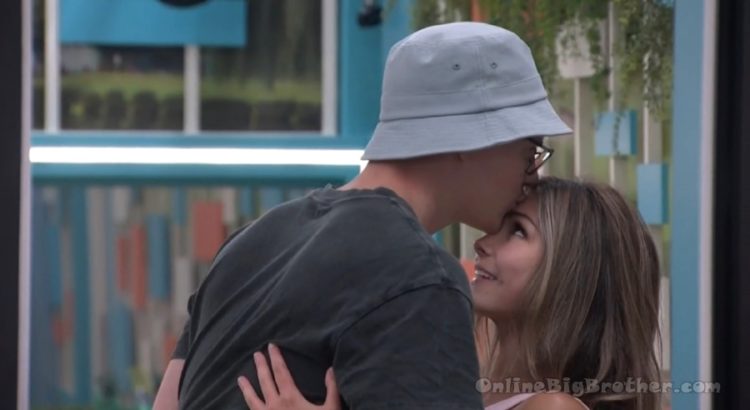 Alyssa kisses his back
Kyle – I can’t I can’t do it.
Kyle – you know it’s bad for our game you and I dong anything alone like this
Alyssa doesn’t think so.
Kyle – with this group of people it 100% looks bad. People are crazy in this house. They are looking for the smallest thing to use.
Kyle – stop it.. you are so cute.. you are so freaking cute. Alyssa
ALyssa keeps trying to kiss him on the arm Kyle replies with some “no no NO” 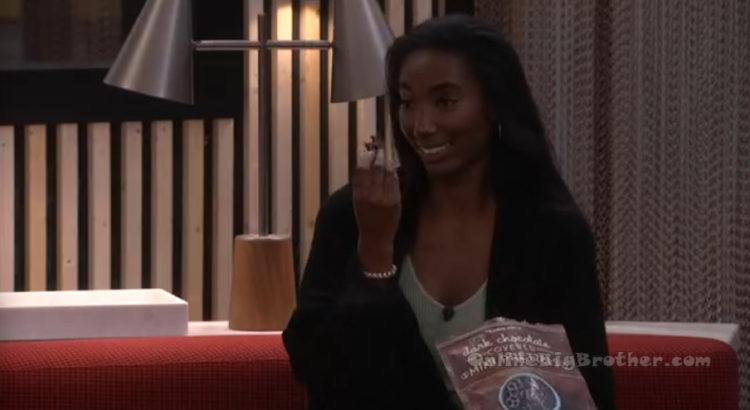 9pm HOH room. Monte, Michael, Taylor and Joe.
Taylor – She’s (Nicole) dropped a hint to Terrance too. Monte – really?! Were you talking to Terrance on the hammock? Taylor – yeah. Monte – what did she say .. I mean what did he (Terrance) say? Taylor – he said that she is not really feeling like going up and like she is nervous after Ameerah and all that stuff and that is as much as he knows. He is trying to get me to blow up PO’s pack some more and really pin that on Nicole so that house will flip against Nicole and want to get her out. Monte – LOOK AT TERRANCE WORK!! Joe – did Terrance ask you how you found out? Taylor – I just said look I overheard it. I didn’t give him too many details. Joe – yeah, yeah. I love Terrance but he is only against them because they betrayed him. Its not like he was left alone and we can.. 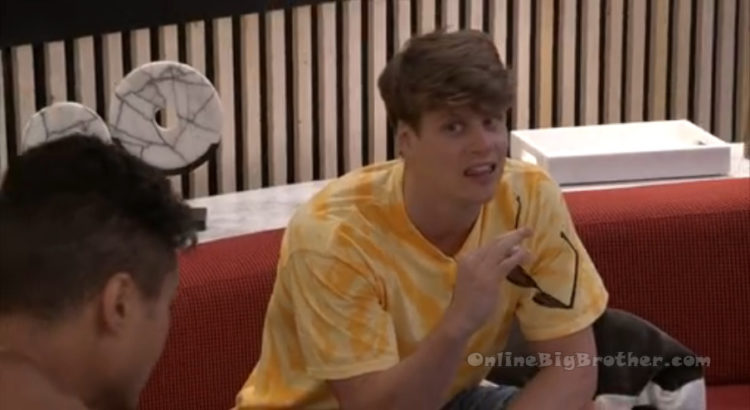 5:36pm HOH room – Joe and Kyle.
Joe – dude she (Alyssa) is definitely finessing you. Kyle – she’s not dude, she is freaking out. She knows Jasmine is livid at her. You told Jasmine that she is loaded (rich) or something. Ameerah told you that she is loaded. And I guess that pissed Jasmine off! Joe – it did?! Kyle – and so now Jasmine is going around saying all this sh*t and then she cornered me and was like who told you about my business? And I didn’t say whether it was Ameerah or Alyssa and so right away she goes to Alyssa and is like YOU TOLD KYLE!? And then Alyssa kind of snaps and is like yeah I told him this or that and then Jasmine is livid at Alyssa and then Indy is mad at Alyssa too and talking all this sh*t. DUDE they’re imploding!! 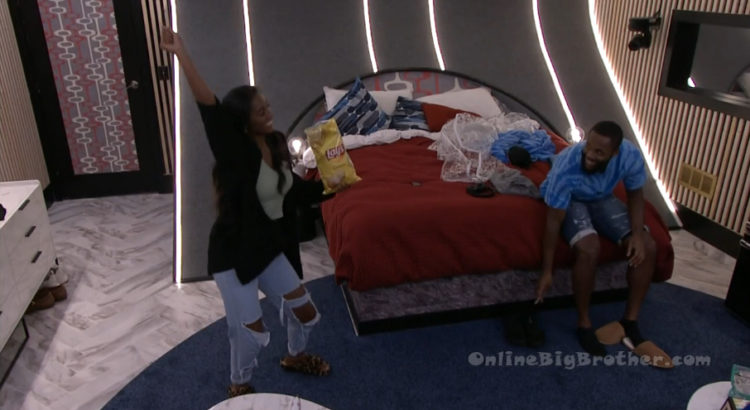 HOH room – Monte and Taylor.
Taylor comes in celebrating. Monte – what’s happening? Taylor – let me go grab my chips and lay down because I’m so sad. Monte – this is very, very poetic! Taylor – yeah. Oh my god its going to be so good! Monte – I hope Kyle allows Daniel to be the one to do the speech. Taylor – it would be an amazing speech. Monte – are you still good with the plan though… 100%? Or how are you feeling? Taylor – I mean I not 100% excited about that but .. I’m 80% and only because I am nervous about next week and onwards. Monte – Mmmmhhmmm. Taylor – I really am nervous about Brittany and Michael’s safety and that f**ks all of us. Monte – yeah. Nicole came in here and came up with a wonderful plan that she already told Indy that if she wins HOH… If Indy wins HOH that she should put up me, Terrance and Joe as pawns and then backdoor Michael and Brittany. 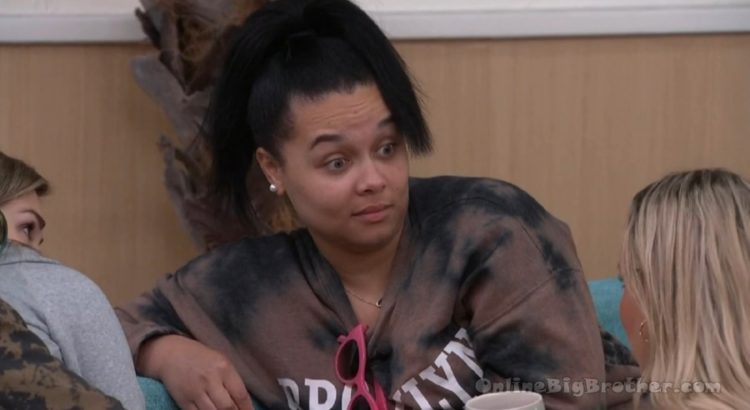 9:00 am Jasmine and Alyssa
(Jasmine is generally complaining about Turner not doing things for her because her foot is still healing)
Jasmine – I’ve never meant a person not inconsiderate it’s more doesn’t think of anybody else. The hospitality part
Jasmine – Somebody that leaves their coffee mugs .. doesn’t care about the next person. I don’t know I don’t understand.. like they never ask Hey can I grab your batteries? How about you wake me up when you are in there. They never ask HEY want me to fill up your floaty? never trying to be helpful. 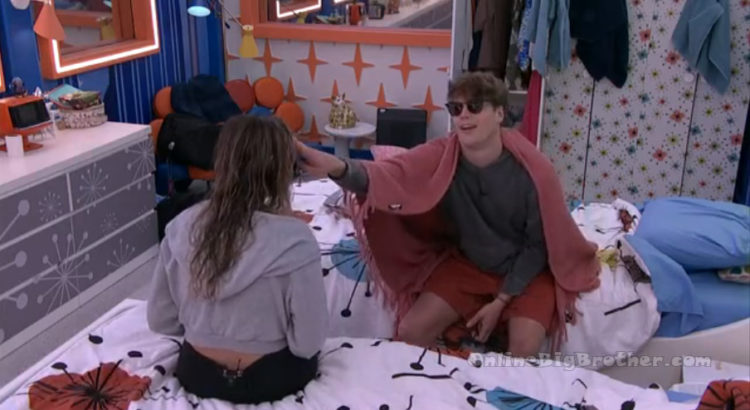 8:52pm Bathroom – Kyle, Taylor and Joseph.
Taylor – after veto because right now they think they’re ___. Kyle – yeah but after that Monte won’t have the decision. I mean he could say my plan was to backdoor someone else but Kyle and Daniel won the veto and decided not to use it… so like we ruined his backdoor plan. Taylor – so whoever plays veto has to not use it. Kyle – exactly! Joe – yeah. Kyle – which is going to be tricky because Daniel could choose to use it or Nicole could choose to use it. Taylor – right. Joe – and they would disable us. Taylor – and if I play, I am safe. But that would be you and Daniel in that case. Kyle – which is fine… we can cross that boat.. cross that bridge. Joe – I obviously have to play so if I win it, whatever you guys want. 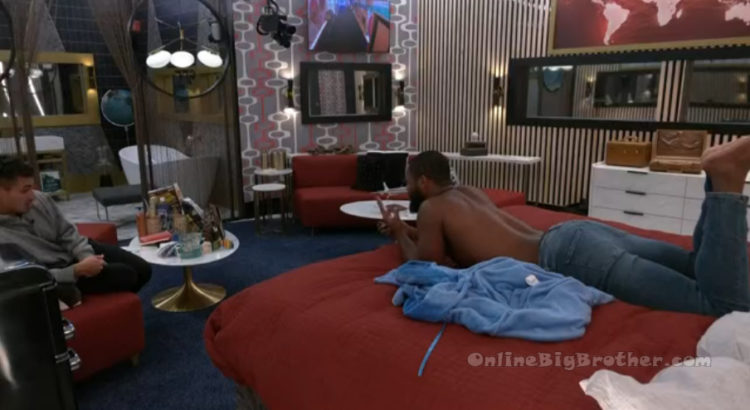 5pm HOH room – Monte and Joseph.
Monte – I think at this point this is a week that we just sit back watch and see as much as we can get. And with the comp tomorrow I would love for us to ummm… Joe – catch that veto. Monte – catch that veto. Joe – and based off how they’re all behaving .. we either just hold it or use it. Monte – exactly. And based off of Taylor too. Joe – yeah. Taylor’s opinion one and two depending who wins the veto because obviously if Indy or Alyssa win it they’ll use it. If me, you or Terrance get it… you made the comment that there’s a bigger target which would make you a liar and make it look like you were really gunning for them if you’re like I’m not using it. Monte – yeah. You have a good point. If we win it.. or if I win it more specifically ..or if we win it.. because.. Joe – we’re the same person (festie besties). 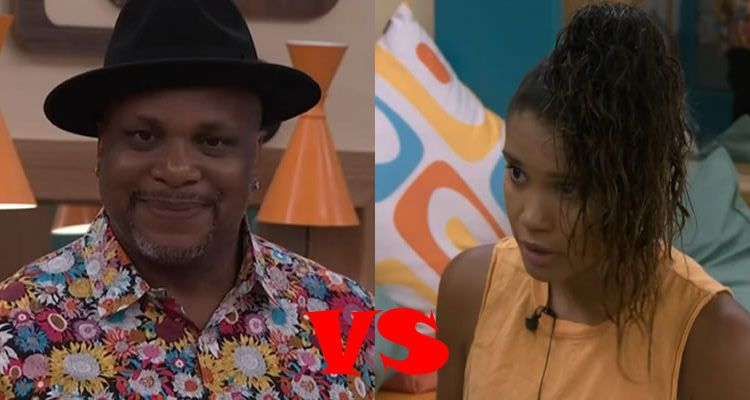 We’ve really been treated to a great week of Big Brother on the Feeds. All the players left out of the majority alliance that controlled the house for the first two weeks formed together. They created a new Majority alliance. We rarely see this happened Especially week 3 (A fun week unexpected blindside week that is). This season is shaping up to be great lets hope the momentum continues. 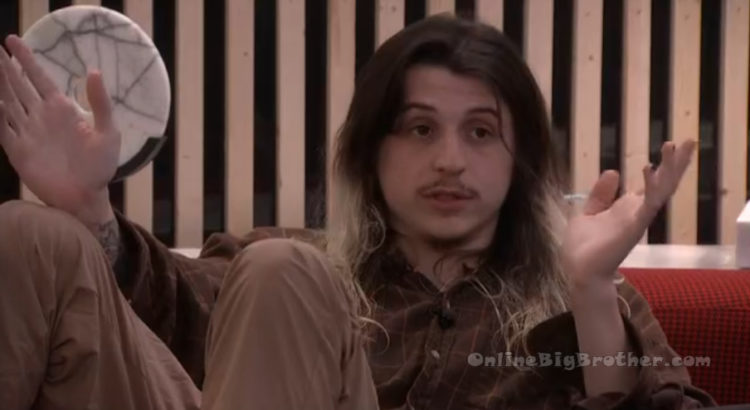 10:03pm HOH room – Nicole and Terrance.
Nicole – I love you so much! Terrance – its okay. Nicole – no its not okay! Terrance – its okay, its going to further your game. Its okay! Nicole – its not okay because the fact that like I expected you to be here the entire time and the fact that you’re not going to be here anymore .. its like maybe we should have made our alliance bigger. Terrance – its alright. Nicole – I love you so much! Terrance – yeah. I felt it all throughout the day. I knew it .. it was too hard of a battle for me to.. she is a hell of a player and it is just what it is. Nicole – I was just hoping that after all the conversations you had today.. that maybe something would be different and its clear that its not. Terrance – no. Nicole – I know that Daniel and I are devastated. 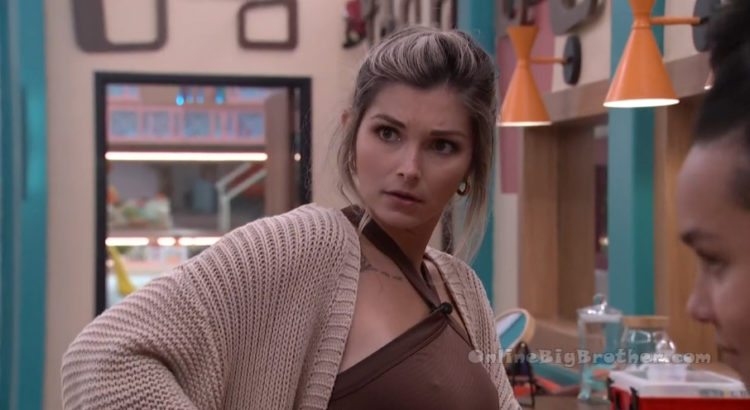 8:05pm Storage room – Brittany and Monte.
Brittany – are you feeling good? Monte – I’m feeling great. Has anyone approached you for votes or anything like that? Brittany – Terrance has but only so many words. I think Ameerah thinks she’s good. Monte – yeah like she has it in the bag. Its going to be unfortunate to see that surprise. Brittany – do you think its going to be split or do you think.. Monte – I think its going to be pretty close because Daniel and Nicole are thinking of voting for Terrance. Brittany – so its pretty much going to be Jasmine, Alyssa, Indy.. so if its 3 whatever.. Monte – its going to be more than that.. Daniel, Nicole, Jasmine, Alyssa, Indy… so that’s five votes she (Ameerah) has and then our 6 (for Terrance). So its going to cause a lot of confusion on the other side which it might be good… and just let them fight to the death over it. Brittany – yeah. With me and Michael and you and Joseph we could get put up.. 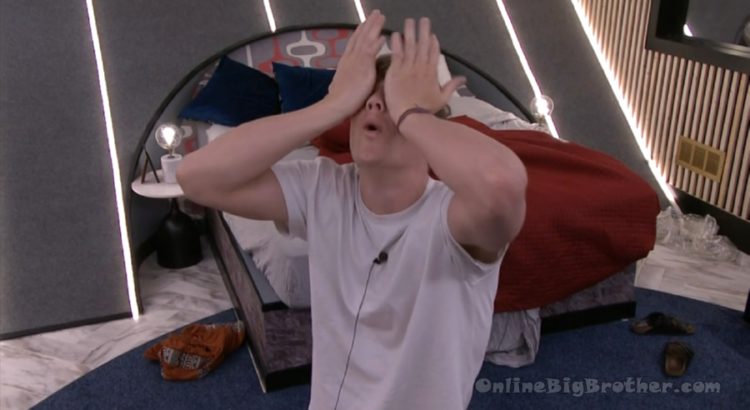 Kyle says Ameerah told him she makes 300k working at Google. “ohh damn ok that’s a lot so of course I tell everyone.. it’ get back to her and she corners me in the storage room and she’s like you told somebody. I was like no I didn’t”
Kyle – you have to lie every second in this house.
Kyle – we have the 7 that is solid.. I’m worried that Joe, Monte and Taylor might team up. Monte and Joe are super TIGHT. Joe is like POOCH. He thinks he’s so slick having all these conversations but I think people see right through it.