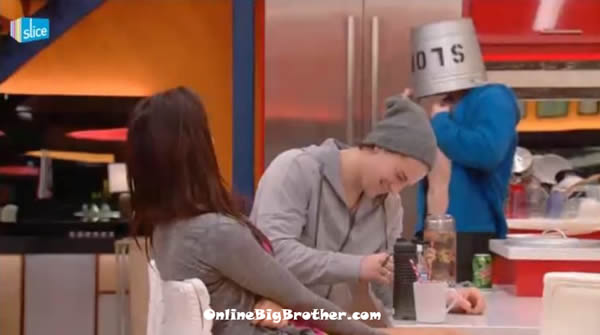 8am Big Brother turns on the lights in the house to wake up the house guests. In the havenot room Topaz comments on how there is a havenot competition in one hour. Talla complains about having cramps. She stumbles getting up and Alec calls her a sloppy mess as she leaves the room. They all get up and head to the kitchen and bathroom to make breakfast and get ready. Liza talks to Andrew in the kitchen about how they need to have a havenot competition so that those on slop can get off it. Emmett and Peter are talking out on the backyard couches. Peter says that they are probably still 4 hours away from the havenot competition. He says that they still have to lock us out of the backyard, set up the challenge, then call us into the living room. 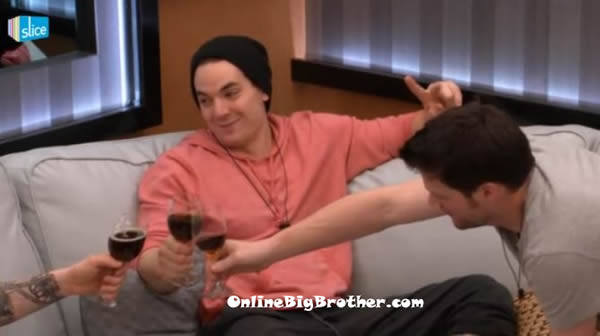 11:20pm The live feeds come back, Alec and Peter are in the storage room talking game. After their short conversation Alec and Peter head into the kitchen. Alec tells Peter that he is going to ignore Tom this week to keep the heat off them.

11:25pm Tom already got his Head of Household room. Emmett, Andrew and Tom are talking game. Tom says that he is going to put Gary and Suzette on slop if he gets to choose. Tom says that both Gary and Suzette wanted to lose weight so those are the two I will pick to go on slop. The conversation turns to talking about Suzette and how she was talking about how the guys were getting blow jobs and sh*t. Tom says that regardless he wants Gary out. Tom looks at the camera and says that they noticed how Danielle told them all that she didn’t like Gary and then next moment she was best friends with him. They talk about how they all need to discuss how they will vote and follow through with the votes because if one or two of them had changed their votes tonight it would have totally change the results.

As big brother leaked the type of head of household competition earlier this evening on the live feeds, we learned that the house guests will be competing in a mental A Or B Question competition. Both Simon and I predict Gary will win tonight’s HOH compeition. Who do you think will win? 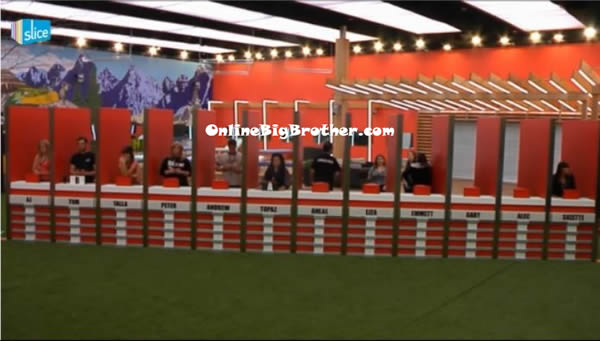 3:20pm Jillian, Emmett, Peter and Aj are in the kitchen discussing what the HOH competition might be like tonight. Peter says that it will probably be booths set up for them to answer questions. Jillian says that she is nervous. Peter asks why, you’re not playing. Jillian says yeah but I am nervous to see who wins. Peter and Aj start talking about the havenot competition that will happen tomorrow. Peter says he thinks it will be 3 teams of 4 again since the havenot room can’t sleep 6 people. 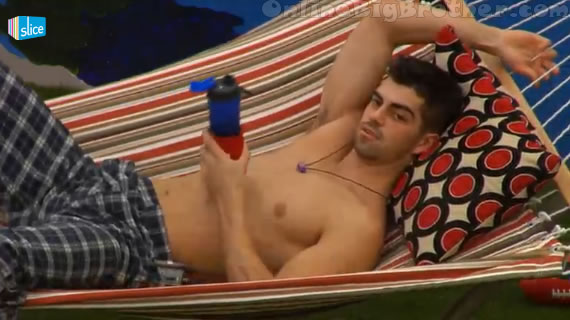 Talk is about Tom going around with independent plays. It’s a good idea to keep him around for a bit though because he’s everyones target. They just need to keep their cards close. Alec brings up that Liza told Topaz final 2. Emmett: ‘Liza is making a lot of deals” Alec: “yes she is… I don’t think we need her too far in”

They agree LIza is the biggest question mark in the house.

Alec says that Topaz is a couple steps behind because she doesn’t think that Emmett and Jillian are in on the plan to get Danielle out.

Emmett is still nervous about Aneal being in the house.
Alec: “Aneal isn’t going to put you up don’t worry.. ”
Alec says they have breathed new life into Aneal’s game so all his previous deals are out the window. 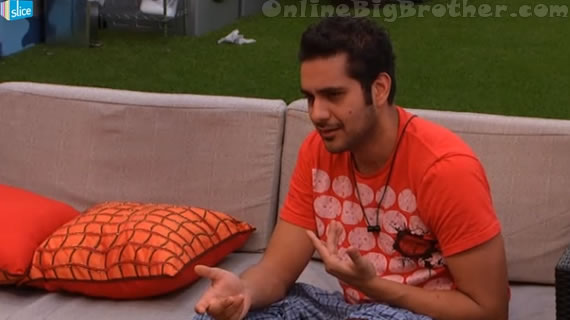 10:45AM Backyard Aj, Talla and Andrew
Hockey Talk.. Why do women sleep around with NHL players when they are just being used as sex objects. Peter talks about a pick up line he heard a Kings defenseman saw once Peter: “Hey do you like giving bl*w j*bs”
Aj said that he met this women once that told him she slept with a Montreal Canadian and it made her hotter to him.
Andrew: “I would never want to hear from a girl I’m daing I Nailed this guy I nailed that guy”
Aj says he respect Andrew’s point of view.
Andrew:”I’m just way classier than you”
Aj says that Andrew hasn’t really been exposed to the younger culture of casual dating where people can draw the line between relationships and physical encounters.
Andrew says he’s slept with between “2 and a 100 million women” that’s all he’s revealing.
Andrew comments that AJ should be seeing a psychologist.

AJ mentions he wants to sleep with someone famous one day.. He talks about meeting Sunny and Sean Michael (WWE(F) wrestlers) with his buddy @murtzjaffer at wallmart 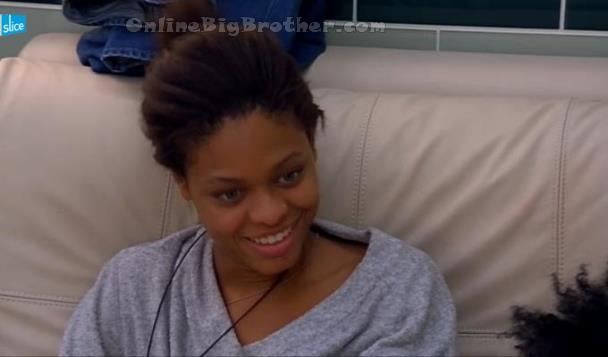 Big Brother Canada live feed Gallery. Images are straight off the live feeds.. We update these pictures throughout the day. There’s thousands here enjoy! Each photo produced has a file name of when it was taken and by which cam. For example one may have the title “BB13-C3–7-8-2012–12_06_08.jpg” C3 = Camera 3 on the feeds […] 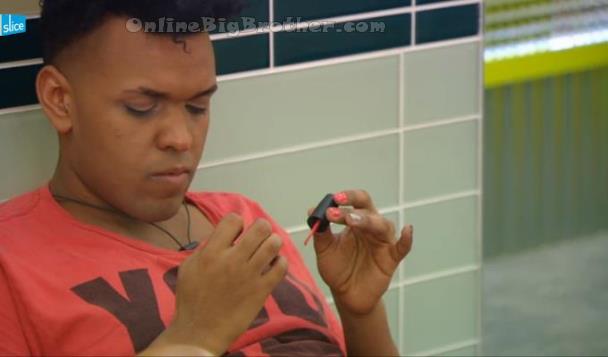 They are chatting about how excited they are to be in the Big Brother House. Topaz says she’s been watching this show for years and now she’s finally in the game.

Topaz: “The only person that was yapping their mouth today was suzette”
Garry: “I know she needs to stop… “
Topaz mentions Suzette is talking a lot about the showmances it’s making her a target. Garry is proud of Suzette for participating but feel sorry for her falling. Garry: “It was all about empowering women”
Topaz: “I love how the guys were into it.. I’m really proud of you.. getting it all ready, doing everyone’s makeup”
Garry: “When the music started I felt like OH my God even Big Brother is onboard”
They start chatting about how surprised they are that Big Brother encouraged them to do the fashion show..
Big Brother: “HOUSEGUESTS STOP TALKING ABOUT PRODUCTION”
Topaz tells him she’s extremely happy for Garry “you were fighting for it.. and i’m happy that we all were able to participate in one way” 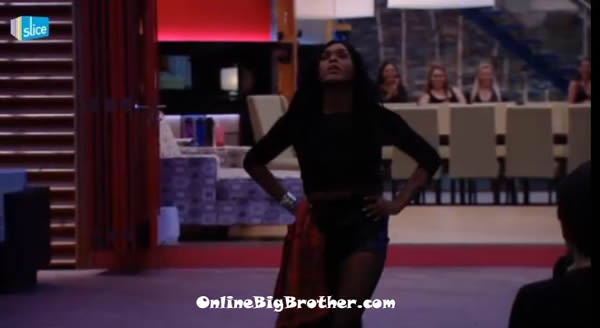 8:50pm All the girls are still getting ready in the bathroom for the fashion show. Liza comments on how she doesn’t want to go after Jillian. Danielle is complaining about how she wants to zip up the leather jacket she is wearing because she is embarrassed about her belly is sticking out. Danielle says “And my thighs look like sh*t!” She says that she is so self conscious right now. Gary comes into the bedroom and says “I have a pu$$y now!!” Danielle keeps practicing her runway walk. Big Brother turns on music over the house letting the house guests know that they will have music during the fashion show. All the girls are super excited. Meanwhile all the guys are patiently waiting at the runway Gary created with the stools.