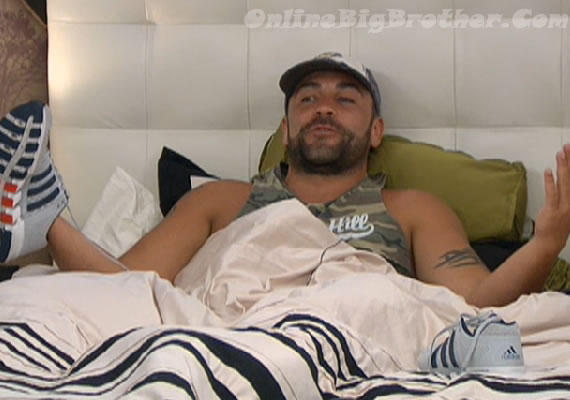 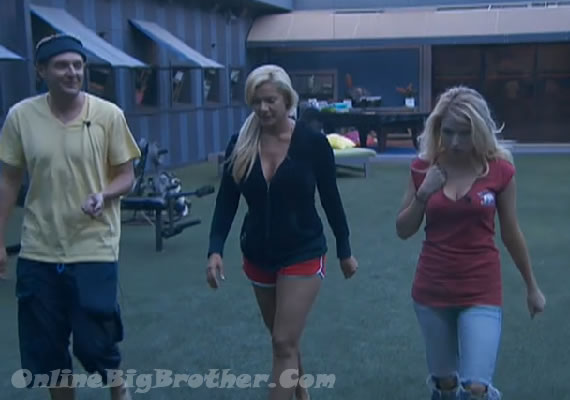 6:45pm Backyard walking laps Britney and Janelle Janelle is feeling like Frank is such a strong player that maybe their plans will be screwed if he stays in the game. Britney agrees but points out that they have some strong competitors on their side. Boogie joins them. They are complaining about the Havenots beds being very uncomfortable. They mention that the deck in the back yard is sloping and it causes the pool table to be messed up.. General Chit Chat. Britney does bring up how her first year in the house she spent it on the couch lounging out. Janelle says she hates the first couple weeks in the house because everyone is so crazy pressure you for votes. Britney mentions how last year should of been called “Lets make a deal” the entire game was people making 1 weeks deals with the HOH. Boogie jokes that Ian is going to start smoking. Britney says it might counteract his crazy coffee addiction. Boogie calls the smokers the “Black Lung posse”
Britney: “I think Willie does smoke more than anyone I have ever met” 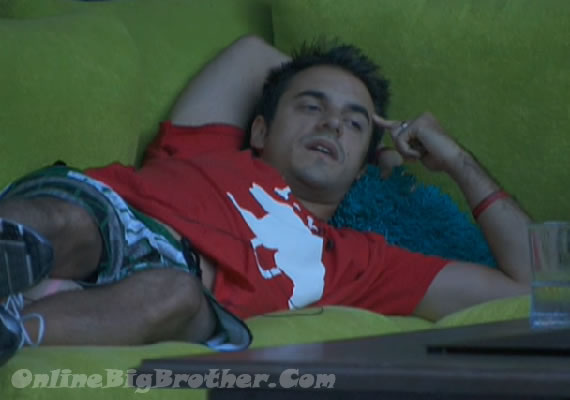 Boogie and Dan talking politics, Boogie says he doesn’t Vote. Dan says he’s republican. Dan thinks that he would stir the house up by talking about politics. Boogie disagrees, “What… you think that JoJo has strong feelings about health care reform”. Boogie asks Ian who he’s voting for, Ian says that he’s going to vote for Mitt Romney . Dan’s adds “You’ve just lost 1/2 your fan base” Ian 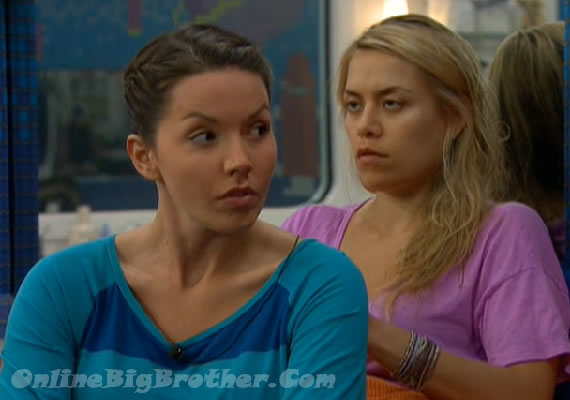 7:06pm Bathroom Danielle, Kara, Britney, Ashley chatting it up, Ashley is doing Danielle’s hair and Danielle is telling them all about the Bachelor. 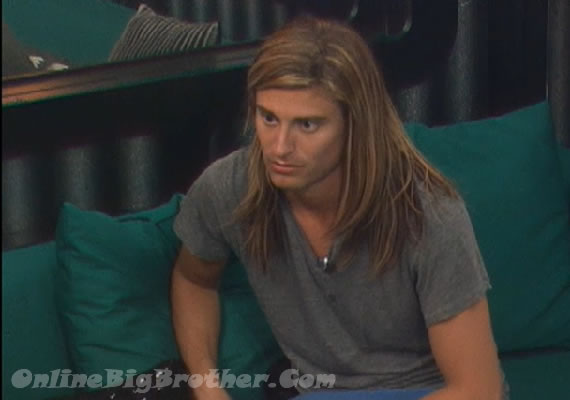 7:08pm Janelle and Wil Arcade Room Wil is saying that Shane has a solid Social game and Frank is a physical threat. They are trying to figure out if Frank can be trusted to throw next weeks HOH.
Janelle doesn’t like that Boogie and Frank are working together.
Wil: “you just don’t know if Frank is a man of his word”
Janelle says that Kara is going down because of Dan. Wil: “She really doesn’t have any game” Janelle: “I know and we know Frank is strong and gunning for us” Wil says that of they are blessed to win the Head of Household competition next week he wants Ian gone.

Janelle says she walked in on a conversation with Shane and Frank which makes her think that Frank really knows this game. Janelle has been talking to Frank more and more they are starting to get to better know each other but the big problem for Janelle is that Boogie and Frank are working together. Janelle goes on about boogie being jealous of her because she won the America’s Choice and ruined his dream of being int he final 2 with Will.
Janelle tells him the only reason they are planning on Evicting Kara is in case they get the HOH next week they can nominate Danielle and take out Dan. Janelle: “That means one less person playing for the coaches competition” Wil agrees, Janelle goes on and on about how good of a player Dan is. Wil: “He’s not that good he already pissed me off”

Janelle instructs him that they Need to win HOH this week and Wil, Joe and Ashley need to agree to a final 3. Wil says he’ll do it, Wil really likes his team he thinks they will do well. 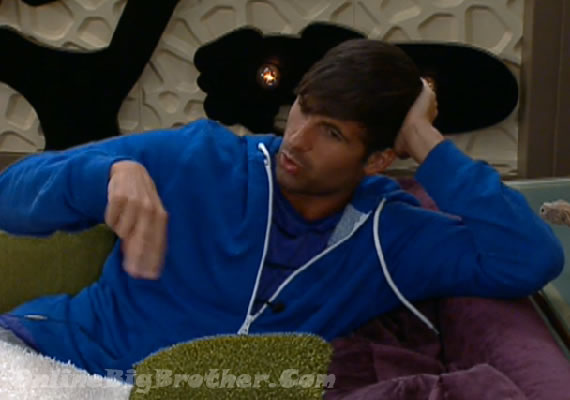 7:25pm HOH Willie and Frank They are trying to decide if Frank can be trusted. Both are concerned about Frank and Boogie being close. Shane doesn’t know what they should do he thinks there are pros and cons to both. Shane: “I would like to have frank on our side” Shane lists off some reason to keep Frank, Shane mentions that Frank is going to take out Janelle’s team, Shane: “that’s what we want later in the game”
Willie says they’re best bet right now is for them to take out Kara and cripple Dan. , Willie is certain that he’ll go up on the block if Ian wins the HOH. Shane suggests to Willie that he start working Ian, Shane’s been working Ian lately trying to be friends with him. Shane starts asking if maybe she would make a tight deal with Frank.. Willie notices that Brit and Janelle are coming up to the Head of Household. Wilie: “Damn Brit is going to get mad at me” 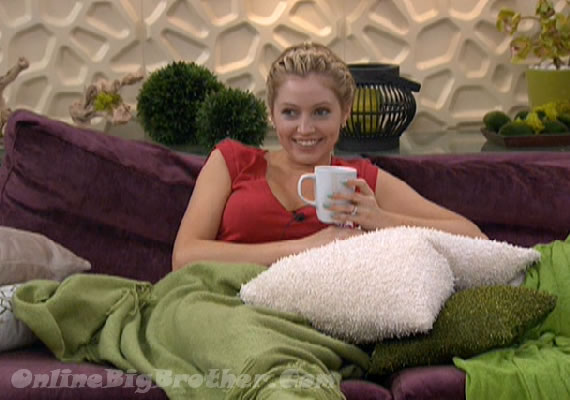 7:39pm Britney Willie, Janelle and Shane HOH They are talking about the other players are asking him questions about his last name. Shane doesn’t know what he’s talking about. Willie explains that his brother is Russell Hantz, he’s known to be a smart player in the game he got to the final 3 twice. Janelle asks him if Willie thinks his last name got him on the show. Willie explains that his connections got him in the door but he had to still go through all the casting procedures. Janelle says that she helped Porsche get on Big Brother she gave her Kasstings phone number (Casting company is called Kassting). Willie says Hayden was the person that got him inside… Feeds cut… Willie tells them he’s going to tell everyone his brother is Russell Hantz because everyone is starting to talk about it. Willie is just worried that Dan and Boogie are going to try and make a big deal about Willie’s Brother.

Shane says he doesn’t plan to use the Power of Veto because it’s in his best interest. Shane is 50/50 on who to keep, he thinks if they keep Frank they need frank to cut a big deal with them for next weeks HOH. Britney thinks that Frank is pretending to not like boogie because he’s trying to trick us into keeping him.

Shane says Joe caught Frank in a lie, he’s with Britney when she says they can’t trust Frank. Willie brings up the fact that Kara doesn’t think for herself she’ll do whatever Dan says but Frank thinks for himself. Shane thinks that if they Keep kara it’ll be easy to beat her in the head of Household competition. Britney tells them that by getting rid of Kara Dan is done. Britney “Dan has some mind powers and he’ll be able to brainwash people for votes”

They all are shocked by how fast the game is going. Janelle: “I’ve played this game before and it’s never been this crazy”
JoJo comes in.. Willie: “Cmon in sex-a-licious”

they are all laughing about how hard the game is.. Willie: “Day 70 someone is going to hang themselves”

All Britney is doing is brainwashing her team against dan. Just saying

JuJu
Reply to  This Guy

yeah she keeps saying dan is brainwashing his team…but its really britney doing that to hers. Dan is just doing damage control to a sinking ship. This season has been crazy intense at such an early point in the game.

Janelle tells him the only reason they are planning on Evicting Kara is in case they get the HOH next week they can nominate Danielle and take out Dan. Janelle: “That means one less person playing for the coaches competition” Wil agrees

How do you not say, well that’s great for you, but for those of us playing for half a mil, taking out the athletic guy with the good social game is much more beneficial than taking out the playmate with barely any social game.

so janelles willing to team with boogie to get rid of dan but what makes her think boogie wont team with britknee to get rid of her? dah did they not learn anything after all these years? janelle is blonde after all. :) oh wait boogies blonde too so lets just say its the blonde leading the blonde :)

I am sooo sick of britknee shes been on 80 percent of the 2 ad shows that have aired and all she does is complain about everything she doesnt like and talk about everyone who isnt in the room with her. she is a really bad actress and she needs to remember we all watched her on her season and we all know what a dud she really is. maybe production will lock her up in the pandoras box room and loose the key otherwise we have a whole 70 days to listen to her and see her. : britknee is this years rachell.

Yes brit and janelle are turning everyone on dan and boggie but that’s Big brother.

@Blah. That’s exactly what I’am waiting for.I wonder if CBS/Big Brother will help Dan out the way they did Jeff on season11.They normally will throw in a twist,if it looks as though a player or a group of people are all against one house guests.What do you guys think.If I had to guess,I will say,production will leave Dan out to dry.I have a feeling this season the production favorites are Britney and Janelle.So if they are going to help anyone it will be those two trash talkers.