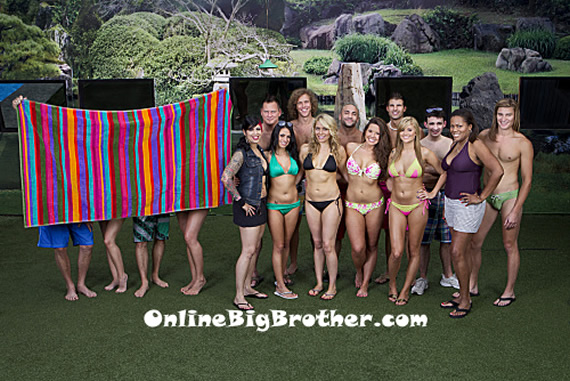 Signup for the Big Brother 14 LIVE FEEDS and get the Mobile Live Feeds for FREE!

CBS has released the Big Brother 14 Cast photo of all the house guests in the backyard of the Big Brother house. Its nice to see Wil Heuser isn’t afraid to rock the banana hammock. The photo also includes the Big Brother 14 Alumni Mentors hidden behind a towel. From the looks of it, it looks like Britney Haynes legs second from the left and Janelle Pierzina four from the left. Its too hard to tell for sure which male mentors are coming back from the photo, but its a strong possibility that its Dan Gheesling and Mike “Boogie” Malin.

If you don’t already have the Big Brother Live Feeds, NOW is the time to SIGN-UP! Every season before the première SuperPass offers the Early Bird Special where you can save $10 off the regular 3 month subscription price. That allows you to watch the ENTIRE season of Big Brother 14 for only $29.99! Plus you get $30 in music credits, exclusive interviews, and much much more ..so its win win! Sign-up today for the the limited time offer runs out! On July 12th the live feeds go back up to the regular price of $39.99!

stop by and visit my site great artwork for the Big Brother house!!

HI Mimi.. did you do design for the new BB house?

That’s janelle at the end I know my girl its about to go down!!!!

I going for janelle and jojo

Brit and Mike noooooooo, two of my least favorite hg. Is there anyway they can go home wk 1&2?????
damn damn damn

I’m alright with Janni & Dan though. It always cracked me up when Howie would always try to steal a kiss from her in season 6&7.

Really hate CBS at the moment. Such. A. Tease.

I dont get why boogie? Dan is boring but at least i can stomach wathing him… Dont like boogie AT ALL

Janelle probably retake her hoh record and increase her pov as well. Is it possible janelle would be eliminated

SOOOOOO excited!! I can’t wait to fall in love with the new cast. Does anyone have a favorite from reading the bio?

So far based on the interviews, Bios and the info we dug up online I like (in no particular order) JOJO, Willie, Wil, Ian, Jenn, frank, Joe and Jodi.. Shane, Kara and Danille will be a bit boring.

Typically I’m 100% surprised once I see them on the feeds.. a perfect example is Adam from Big Brother 13, I really thought he was going to be awesome instead we got bacon boredom x10.

Who knows Shane might be awesome (another Howie), Jenn might be another lydia, Wil another Kevin, Willie another Russell (which would actually be pretty cool), Joe a potential chicken george..

This season I think the players aren’t going to be a bunch of kiss asses like the BB13 noobs.

I see Dan, Britney and Janelle.. not sure if that is mike boogers or not..

I Loved Mike Boogie and Dan this is going to be a great season.

Ewwww. That’s more Wil than I ever wanted to see!

I know.. wil is going to be crazy on the feeds.. LOL a banana Hammock..

on another note the site was having problems processing the comments, I have fixed the problem.

I you get “commenting too fast slow down” message please email me and i’ll fix it right away. We shouldn’t see the problem again this year but you never know.

I will be checking it 4 times daily for the next few months. Hoping to see some actual moves being made this season (poor Dani).

Thanks! We hope there are some great moves too! From the first look at the cast and twist I think this is going to be an awesome season!

OKAY ANYONE HERE STUDIED PEDIATRICS??? SHARE YOUR TALENT AND FIND OUT WHO THE MENTORS ARE!!!

I KNOW IT WEIRD BUT IM MOSTLY SURE THAT’S DAN’S FEET!

Haha. I think you mean podiatry

DAMNIT Dani was just blacked out :/

Daniele & Kaysar blacked out :( .
I like how CBS is leaving Rachel & Jeff up there for last simply to torment us. Lol.

Remmey and Jesse will be next!