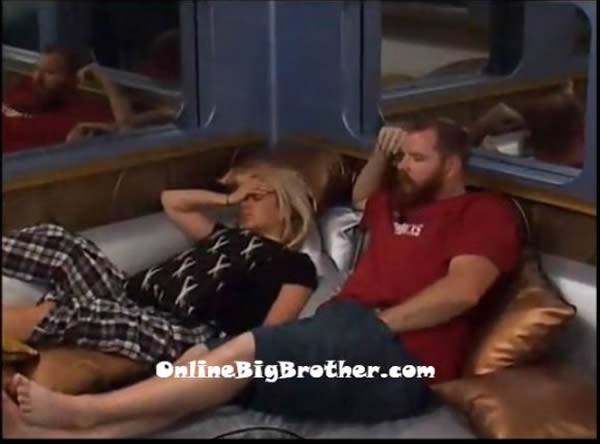 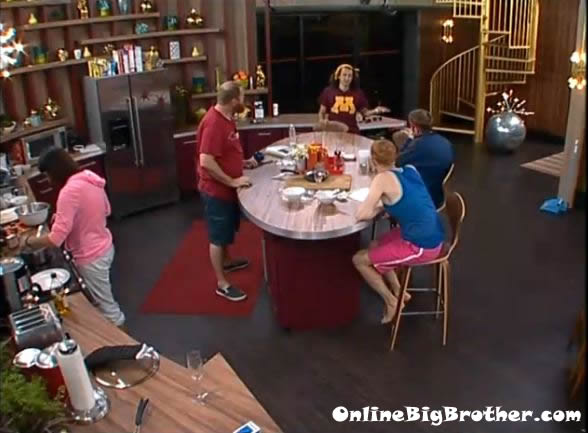 3:50am In the kitchen – Judd, Spencer, Andy, Amanda, McCrae talking about random stuff. Judd says that he just hopes he doesn’t do anything weird on the feeds. Amanda yeah that’s what I am worried about like that I have semen on my face. 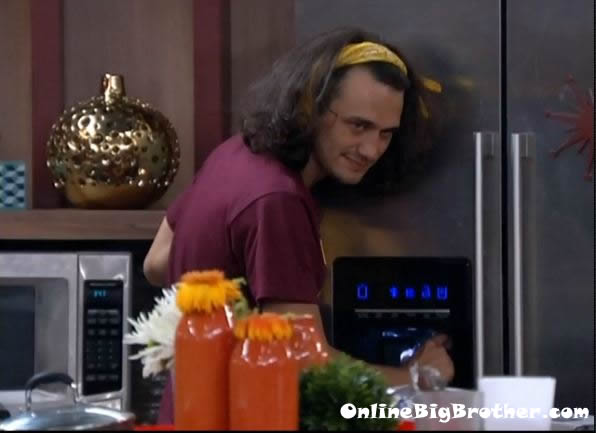 3:55am Jeremy and Kaitlin are in bed together talk about still trying to comprehend being in the house. They talk about how Jessie was chewing Jeremy out today. Jeremy thinks that if there is drama on us …then it will put a target on us. Amanda joins them. She says that she was so wrapped up in not showing her titties earlier that she can’t remember where she put her sunglasses. Amanda puts a weave over her face and pretends to be like the girl from the movie The Grudge. She then puts a hat on and starts dancing around the room. She jumps up on the bed and says shhh.. I’m in an alliance with the wall! She leaves and quickly comes back, grabs the light points it at them and says I’m watching you! 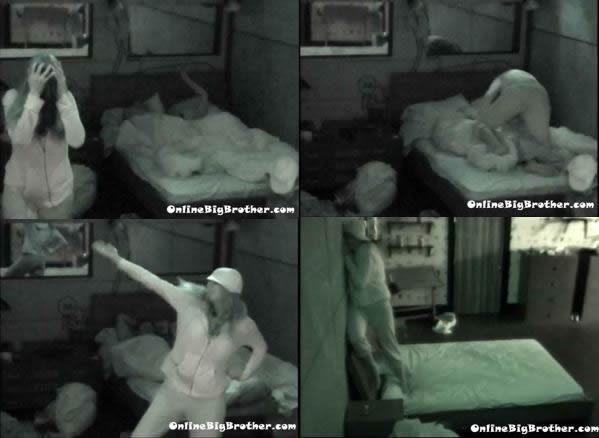 4:10am Kaitlin and Jeremy are cuddling in bed. Spencer joins them. They ask him where his blanket is? Spencer says Umm.. the sort-a-haves are in there using it. Kailin offers their blanket for him to use. Spenser says um no! Kaitlin says we haven’t done anything.. 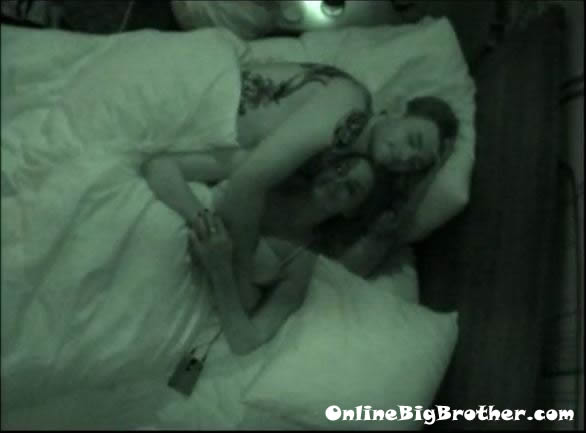 4:15am Meanwhile up in the HOH room Andy is talking to McCrae about wanting to make it to at least jury. He says that it would be horrible if one of these people like Kailin some of these other people that got recruited to be here. Andy says its great if no one knows we are working together … that you and me, Spencer, Helen, and Judd are working together. 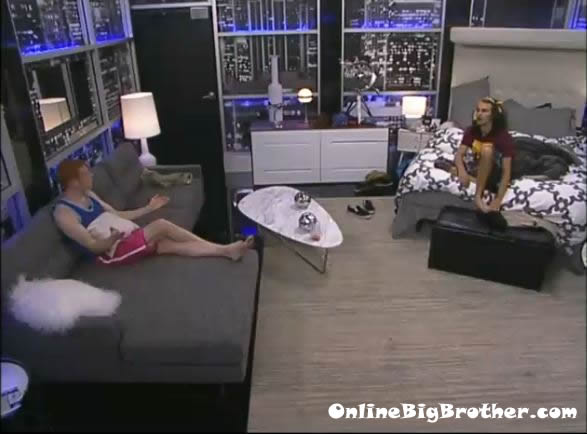 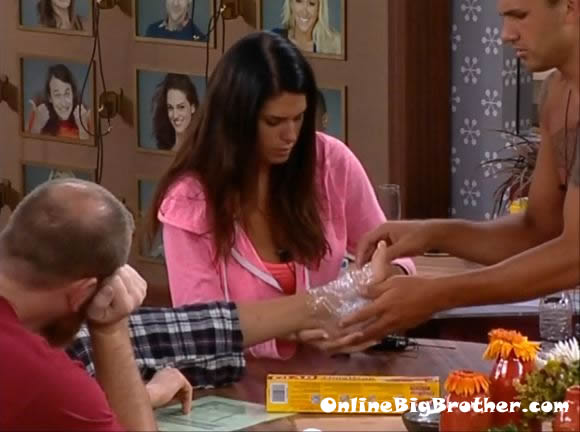 4:20am GinaMarie hurt her foot and Amanda and Jeremy are wrapping saran with ice on her foot. She says she has never had an issue before she does kick boxing and dancing. I am here for 3 days and I get hurt! She’s upset. Spencer carries her into the lounge room. He lays her down, slides up next to her …reaches into his pants and adjusts his junk. Soon after – Andy, Jeremy, Kaitlin, McCrae and Amanda join them and they talk and joke around. Amanda and McCrae head to bed up in the HOH room. GinaMarie comments on how she shaved her tw@t today. She says its hard to shave your tw@t standing up. Kaitlin heads to bed. Amanda tells McCrae that he is the nerdy pizza boy. She tells him he shouldn’t have any insecurities like that he is the outcast. McCrae agrees.

4:55am – 5:20am McCrae and Amanda are up in the HOH room talking about Elissa. McCrae says we can’t feel bad about getting her out just because she is Rachel’s sister. McCrae says I want to work with her but she is so tactless. Amanda brings up how Elissa said that Spencer was the MVP. The conversation turns to talking about Judd acting weird. Amanada says that he walks around like he is a drug addict. Amanada talks about how she is talking to the others and helping them so that they think I’ve got their best interest in mind. The conversation turns to McCrae talking about how David who never talks to anyone was questioning him about being a pizza boy. Amanada says it’s painfully obvious how Jeremy is just playing both girls and just wants a blowmance. The both agree that Nick and David are the scariest players. Amanda and McCrae both agree they are both good and just need to ride through. Amanda says lets just let Elissa talk. I gave her 3 opportunities to be normal and she fu*ked it up. She was already crying and complaining about wanting to go home. Amanda and McCrae wonder if Elissa got some incentive to be here. They turn over and fall asleep.. 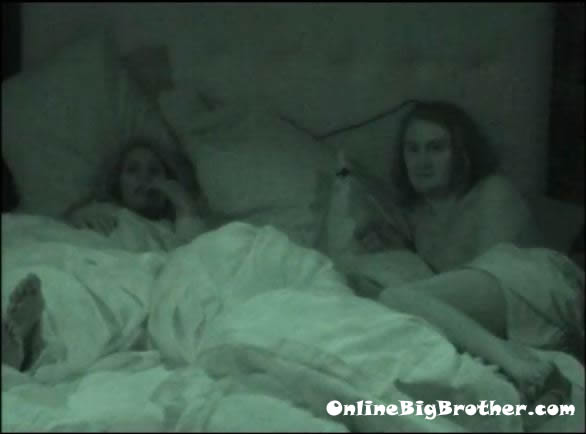 5:25am All the house guests are now sleeping..

How do I get flashback? There is no button for it

Flash back is the small calender button above camera 4

Has anyone else noticed how Helen is completely under everyone’s radar?

I want her to play a Danielle Season 3 game.

Just win it this time girl!

GinaMarie is just nasty and so is Spencer!

What a fucking creeper! O_O

SIMON and DAWG, I just donated to your site. Looking forward to an exciting BB summer!!

Thank you! We appreciate it! We are looking forward to this season too!!

Te fact that the girls are guning for Rachel 2.0 makes me want her to say, just to piss them off!!

i trying to remember everyones names damn I cant keep up with this drama already ..

I bet there would be # of HoH wins in big brother history. The number of HoH wins is 4. Any prediction? I predict nick with 5 HoH wins with 1 PoV wins.

Is the new brigade solid? Or is mccrae playing the whole house

Wow a lot of the girls are simply unlikeable…do they want to win BB15 or just hook up with Jeremy!

I do believe we could have a very wild summer coming up. These girls are something else. And the guys… not a one impresses me yet.

Have any of the HGs brought up how the MVP twist is a transparent attempt for production to pick and choose who stays? No way Elissa isn’t MVP this week.

Hey Hey Simon and Dawg … Good to see you gentlemen again and it looks like we all gonna have a good summer.. Donation to follows soon good sirs !!!

Hey Boilermaker, thanks! glad to see you’re back

Slowing catching up, Hi guys back for another fun filled season of BB!

Did Elissa actually confirm that she is Rachel’s sister?

I beehive she did to one of the girls.. She was talking about The Rachel Army to someone late last night.

Oh okay…thanks Simon! We are in for one heck of a ride this season!

Rachel: Elissa, what happen? You lost and disgrace the Reilly Clan.
Elissa: I’m sorry, I almost had it.
Rachel: Don’t worry about it, all my peeps voted for you as MVP.
Elissa: Thanks big sis. What about Moving Company alliance aka Brigade 2.0?
Rachel: I already have my hubby screw Matt and I already dismantle the regulators in season 13. Just focus of dismantling all guys alliance.
Elissa: I hope so, they are mantle tough.
Rachel: Here, read the instruction and make sure no one knows that you are my sister.
Elissa: Okay, I hope it helps.

Huge problem with that, Elissa favors Rachel, couple people figured it out, more will as the game goes on, she has very little chance to win, once everyone starts to “guessing”, she would literately need a power or protection every week.

I was thinking last night,she should’ve thought about how much she looks like Rachel before she entered the house, and maybe made herself look more “rugged” to not gain attention before she had a chance to play the social game.

Rachel is obviously not that smart if she didn’t at least warn her about that, she has to know how much they favor each other.

I’m annoyed with all the girls already…fighting over Jeremy and David when neither of them are worth fighting over, ick. Jessie is the new Danielle, “tell me I’m pretty” “I’m so pretty America” I wish Jessie Kaitlin and Jeremy could be evicted in a triple eviction this week. Id rather deal with Elissa than hear their voices…

“Amanda yeah that’s what I am worried about like that I have semen on my face.”

I swear if one of the ladies gets caught on cam with man juice on their faces…. I’m gonna ROFLMFAO hard.

I highly doubt any of the women will win, ;east of all Elissa, she’s not Rachel, and at least she had comp wins and social circumstances that protected her(besides she was the only one that mildly deserved to win).. Elissa’s secret is already out, her time is just about up.

Ok I bought fell off my bed laughing at the gif of Spencer adjusting his stuff hahaha! Love the gifs, keep them coming!