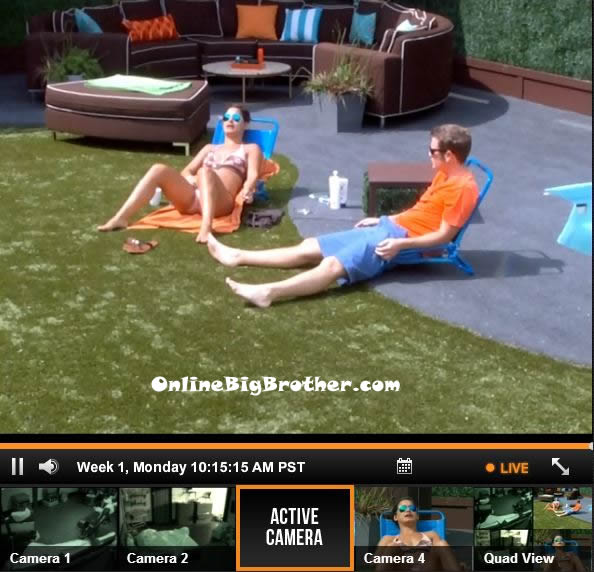 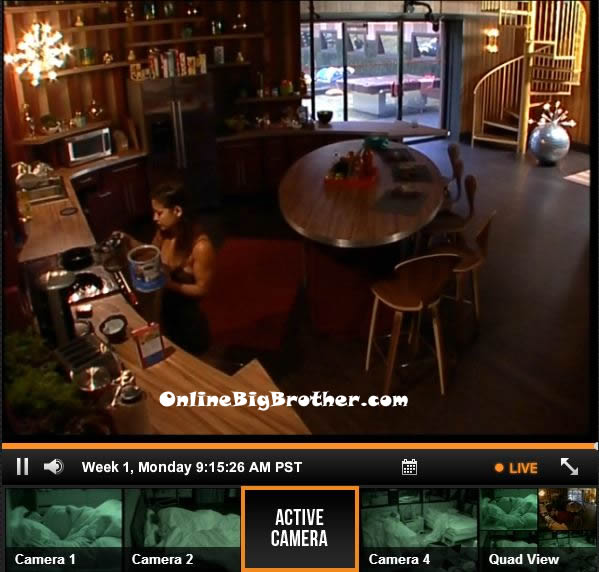 9am – 9:30am Jessie is awake and up for the day. She is in the bathroom getting ready, then heads to the kitchen to make breakfast/coffee. All the other house guests are still sleeping. No wake up call yet. Jessie heads out into the backyard to drink her coffee and have a smoke. 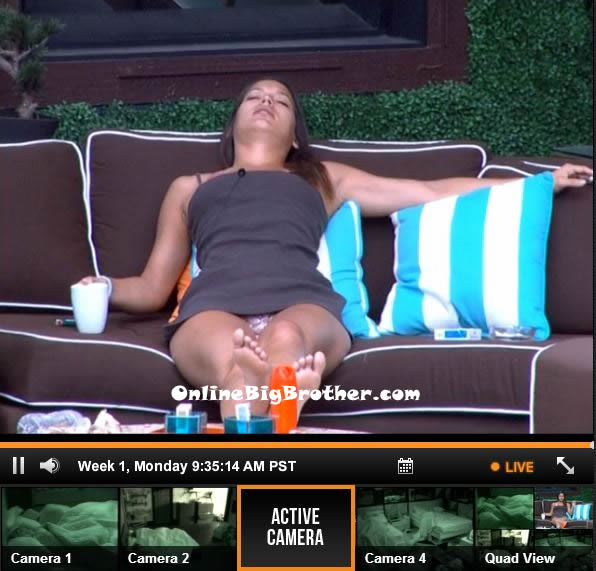 9:30am – 9:50am She then lays her towel out in the middle of the backyard and starts doing some stretching. When she finishes she goes over to the dryer and starts folding towels. Jessie finishes up and lays out to suntan.

10:10am – 10:25am All the house guests are still sleeping. Judd comes out and she gets him to fix her microphone. Then both then lay out by the hot tub. Jessie asks him about what happened after she went to bed. Judd says not much, everyone was just sitting around. She asks if McCrae had anything to say about it. Judd says no. Jessie says that she just can’t get mixed up in any drama right now. Jessie asks Judd if he is going to go for the HOH this week. Judd says that he didn’t want the first one but thinks he will for this one. Jessie says yeah give someone a run for their money at least. Judd says that even if I had the physical ability to hang on for 3 hours, I just don’t have the mental ability. They talk about what times its better to workout because its so hot out. Jessie then says okay I think I am going to read the bible. Judd heads inside to change.

10:30am – 11am Big Brother wakes up the house guest. When the live feeds come back the house guests are moving about the house. Andy jokingly yells at Judd telling him to keep his mouth shut and to keep his name out of his mouth. They laugh to the bathroom and Judd tells Kaitlin to keep his name out of her mouth too. Meanwhile out in the backyard – Jessie is in the pool. Spencer joins her by the pool. Spencer complains about sleeping next to snorting, snoring and farting. He says that Candice has this whimper when she sleeps. 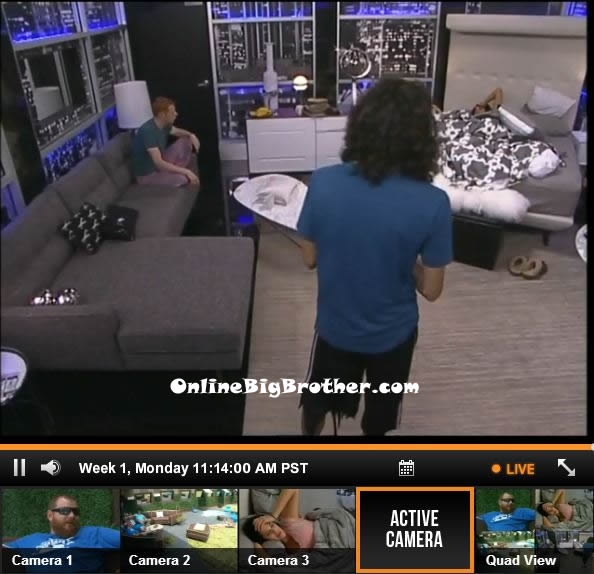 11:15am – 11:30am Andy is up in the HOH room with McCrae and Amanda. Andy appologizes for not sticking up more for Amanada. They recount the events of last night and how much of a “douche bag” Jeremy was to them. Andy talks about how he thinks Kaitlin is a rational stand up girl. Amanda says I don’t know about that she wants to put me up. Andy asks who told you that? Amanda says I don’t know if I want to say, then she says Jeremy. They talk about how when trying to get Jeremy out they will have to back door him. Andy comments that he could hardly stop himself from laughing when Candice and Aaryn started getting into it last night in the bedroom. Andy says what’s funny is that it is all over a hat. They agree that Jessie is just a follower. Andy says that he can’t believe David fell for Aaryn. Amanda says apparently she makes him weak in the knees. Andy heads downstairs. McCrae gets into bed with Amanda. They get under the covers and you can hear lip smacking as they kiss. Amanda asks McCrae what he likes to eat. McCrae says that he is poor so he eats whatever he can get. Amanda says you’re poor? McCrae asks you don’t like me because I am poor. Amanda says I like you just not that you are poor. Amanda talk about how her audi car payment is more that the $700 he has in his bank account. Amanda says that she is 28 and makes a lot as a real estate agent. She says he is 23. She says oh my god you are 23!? McCrae talks about wanting to get into production. She tells him he should have started that 5 years ago. Amanda tells McCrae he has pretty eyes. McCrae says thank you. McCrae says think about how much weird sh*t has happened already.. fights, our weird showmance.. 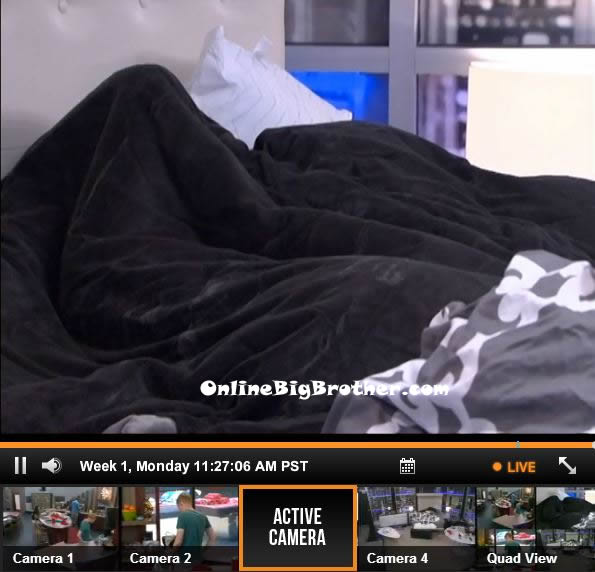 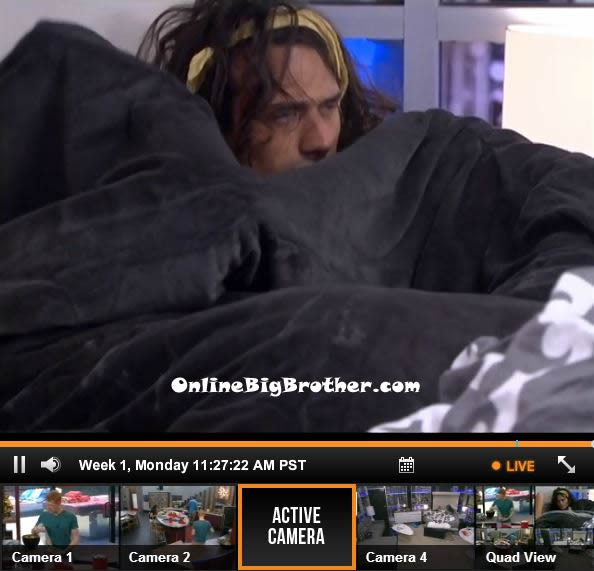 11:35am – 11:50am Spencer, Andy and David are in the living room eating breakfast. Out in the backyard – Kaitlin is in the pool. Helen is doing laps around the backyard. Kaitlin is talking to Helen about how she was just disappointed that Jeremy has that in his personality. Kaitlin talks about how she was spitting fire at him last night. Helen says at least he was able to admit he was wrong and apologized right away. jeremy is also in the backyard working out. Helen asks him if he thinks they are going to do anything today. Jeremy doesn’t think so. 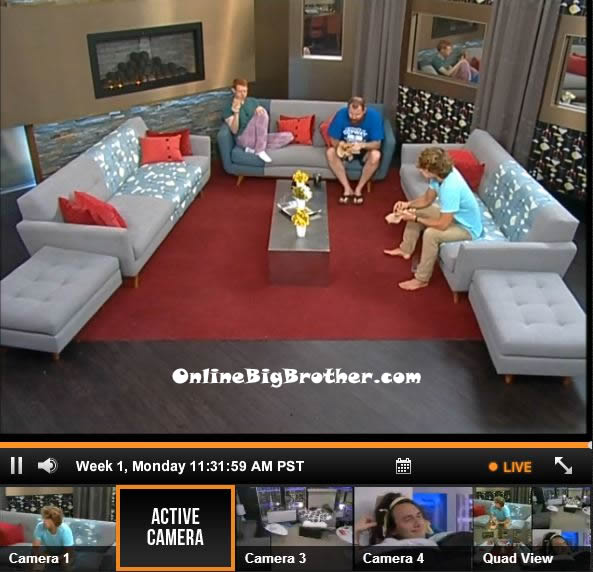 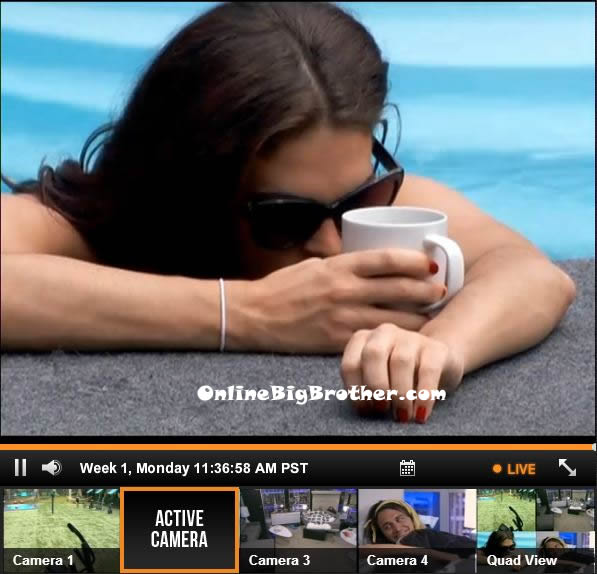 11:55am – 12pm Aaryn and Kaitlin are in the bedroom talking about Jeremy running in to talk to her (Kaitlin) last night when she was pissed at him. Aaryn says that she was so surprised because most guys wouldn’t have done that, they would have said fu*k off. She says that now everyone knows that he is whipped and that’s why he is embarrassed. Kaitlin and Aaryn laugh. 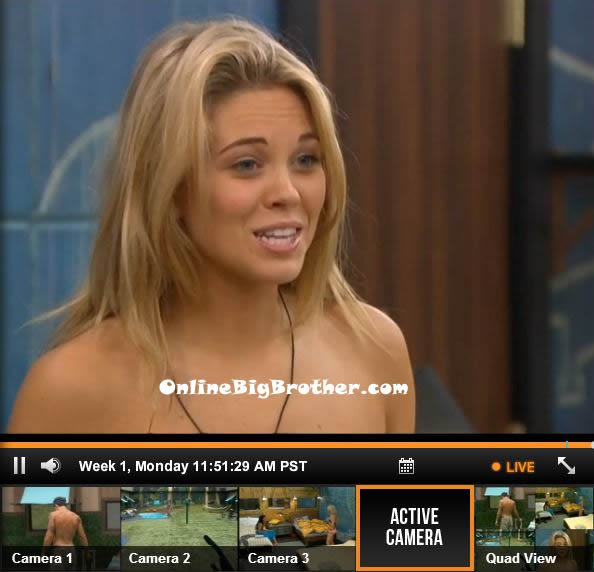 I did a double take, I thought I just saw her axe wound.

Jessie showing her “goodies” to the world. I noticed last night that Judd was putting moves on her, he’s going about it the right way if he wants a showmance. Taking it slow, and not going full throttle on the showmance front early on. I can see him winning HOH in the next few weeks, and Jessie being all over him.

Damn, Jaime showing off to the cameras? I like pic number 4. That’s the best part of Yoga, the “reveal”…

Oh no no it’s quite alright we don’t have to know her name at all… I’m just here for the view.

omg, these pictures. That underwear looks skin colored so it looks like Jessie was totally naked and of course she keeps pointing her thing right at the camera. I just don’t know what the hell is wrong with these girls this year.

Well, I for one have no problem with a little titilation. Small pickles compared to the giant display of male chauvinism, ignorance, racism, bigotry, and hatred in the house.

Jessie has no shame and was for sure doing those yoga poses in the desperate attempt to get MVP.

The whore thought wrong though since I’m pretty sure America hates her and will never vote for her..

wtf are you going on about? she was stretching in the back yard – if seeing a young woman doing that offends you then dont watch – the name calling is totally unecessary

I’m rolling with Nick I think. Only him and Amanda seem to know how to play the game correctly

I dig Amanda also, the only non-annoying female. Shocked at her showmances though.

Just curious, how many of the HG’s are smokers this year? It seems an inordinate number are, I keep on seeing a different person out smoking. Usually they don’t have that many smokers in the house. It’s just something that seems odd to me, and if that is the case, will they give them cigarettes each week with the alcohol?

Seriously now she’s trying to have a showmance with America

He smashed that last night. It wasn’t on camera, however they where getting it on hardcore. The camera cut away for an hour and half, then came back to two people you couldn’t smack the shit eatin grin off their faces! Smashed it!

Not sure why it called me NAME. Cause im a filthy mutt!

Sorry. Guess it was only listed as name for a minute.

Ya who smashed it last night?

McC and Amanda are making out now.

MC and Amanda?!?!!? whaaaaaaaaaaa good for him!

How come my comments keep getting deleted?

Just wondering I think I read somewhere that some people ended up sleeping in the HN room anyway. What were last night’s sleeping arrangements like?

Does Amanda’s boyfriend know that she hooking up with McCrae? She will answer to him when she gets back.

I have come to the conclusion that the only girl I can [currently] stand in the house is Elissa!!!! The rest think they are on The Bachelor!

I’m still waiting to see who the Shelly is for this season … probably Helen.

Amanda giving it up to McCray makes her even more hotter! I don’t think its cause he is HoH either. They seem to have a true chemical romance. I admit Katlyn got the ass from GOD! But I am completely smitten with Amanda!

Aaryn and kaitlin are so naive, can’t wait to see their faces on Wednesday. It’s going to be epic, hopefully Jeremy and his big ego is next.

I for one really like this cast. I think they have the potential to make this a very entertaining and interesting summer and season.

Are we sure Amanda has a boyfriend? On the biography I saw her status was Single. I thought her ”I have her boyfriend thing” was a cover for any showmance talk.

Well, if she does… that dude’s pissed.

my husband says I got to learn yoga now