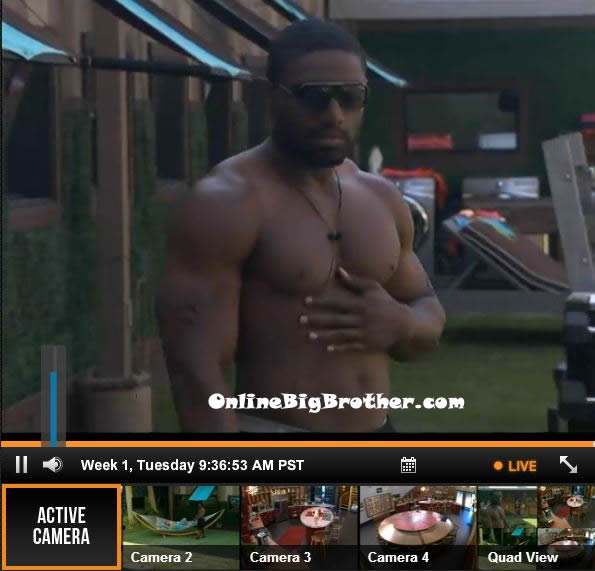 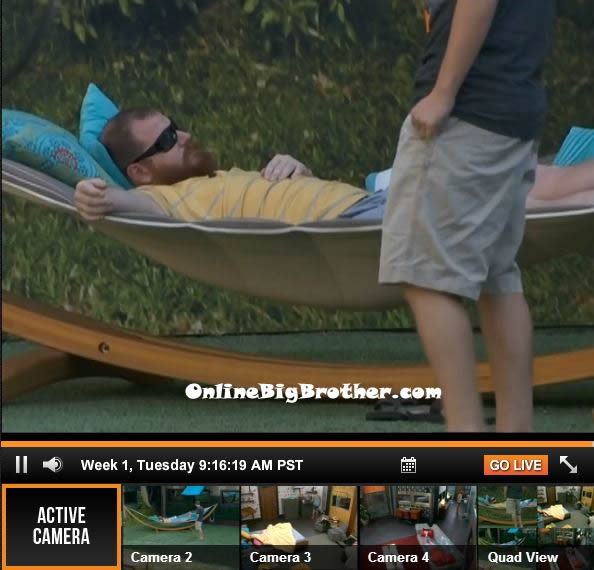 9am – 9:40am Big Brother switches the live feeds to the we’ll be right back screen. When the feeds come back Spencer is out in the hammock talking to Judd. Spencer tells Judd that Candice was annoying him last night because she woke him up to tell him he was snoring. He says b*tch don’t wake me up to tell me I am snoring, I’m sleeping! Judd leaves to have a smoke on the couches and then heads inside. Judd brushes his teeth and then goes back to bed in the have not room. Meanwhile in the backyard – Howard comes over and talks to Spencer.

Helen joins them and comments on how the suit cases are in the storage room. She says its just sad to see any of them go. Helen starts crying about how embarrassed Jeremy’s mom must be feeling. She says she is a fan of the show too. Spencer and Howard tell her not to worry about it. They comment on the drama last night between McCrae and Amanda. Spencer says we just need to keep McCrae focused. Howard laughs and says Amanda talks about her boyfriend but she sleeps with a man the first week, because he is in a position of power. Spencer laughs. They talk about how they just hope that Amanda or McCrae don’t mess things up for them. Helen says this is big brother expect the unexpected. Spencer says yeah from a production stand point but not from the people you trust. Spencer says that McCrae just needs to be re-focused. 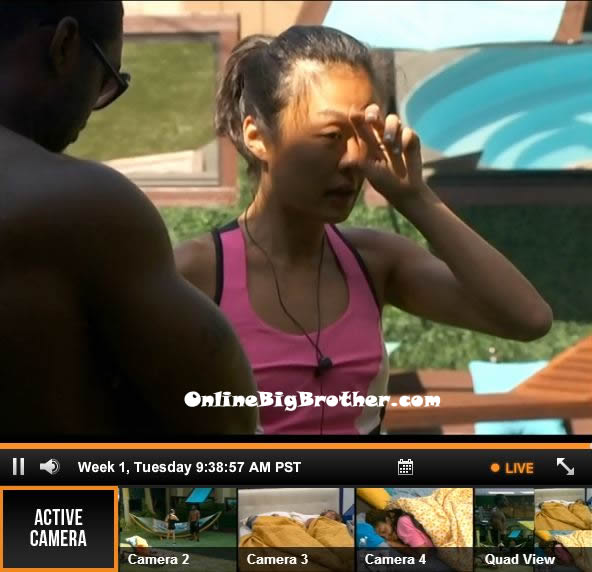 10:15am Camera 1 & 2: Howard and Helen are doing laps around the backyard. Howard keeps pushing himself to do more but has to keep stopping when he is out of breath.

Camera 3 & 4: McCrae and Amanda sleeping in the HOH with the lights on. 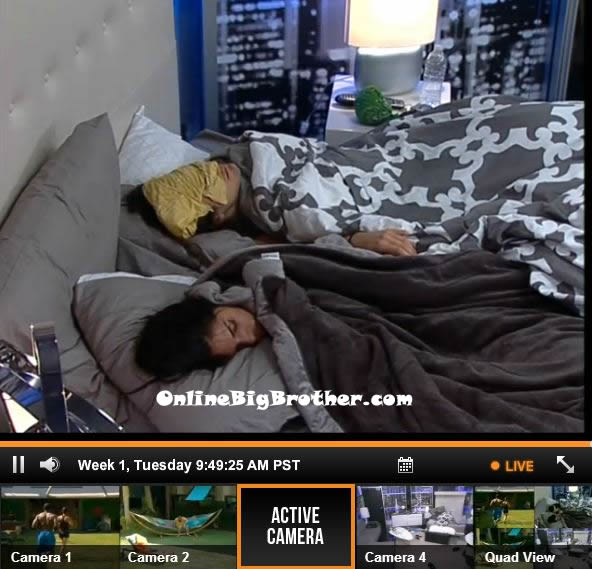 10:40am Howard and Helen continue to workout in the backyard while the other house guests sleep. 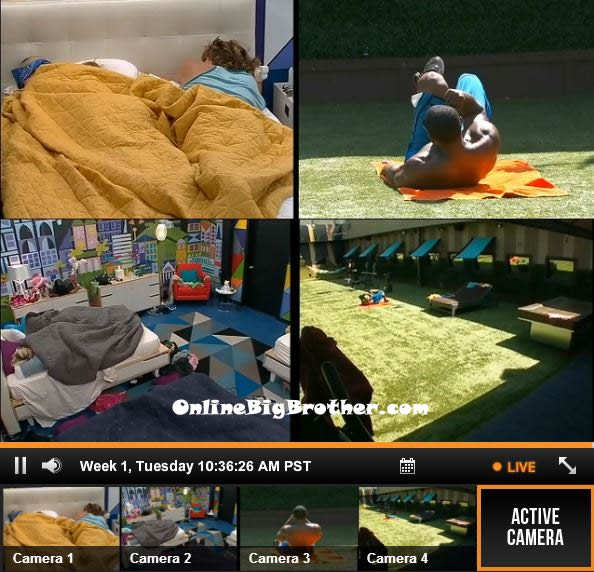 11:20am Helen finishes getting ready in the bathroom. She heads to the havenot room where Andy is just waking up. Howard is getting dressed. Andy asks what time it is? Howard says around 11am. Andy says that he should probably get up. Howard says that no one else but Helen is awake and that is been like that for the last two and a half hours. Andy says that maybe he’ll go back to sleep for a few hours then. 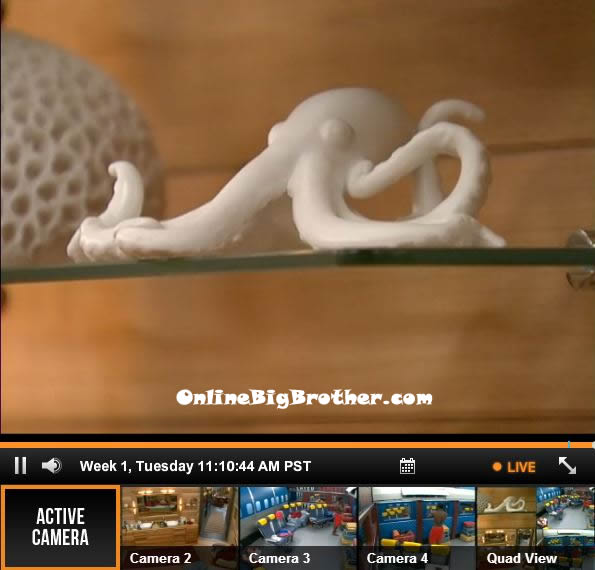 11:30am – 11:40am Howard and Helen are in the kitchen talking about what a great once in a life time opportunity this is to be able to come here. They talk about how Amanda said her boyfriend didn’t want her to come on the show. Helen says then he probably isn’t the one for her if he doesn’t let her explore opportunities like this. They mention that they are like 1 in 40,000 people that auditioned. Helen and Howard talk about how its possible to play this game without compromising your morals. Howard says that he has Christian values and doesn’t want to compromise them. He says that he knows he is going to have to bite his tongue some time. They sit down at the table while Howard eats and talk about random life stories and football. 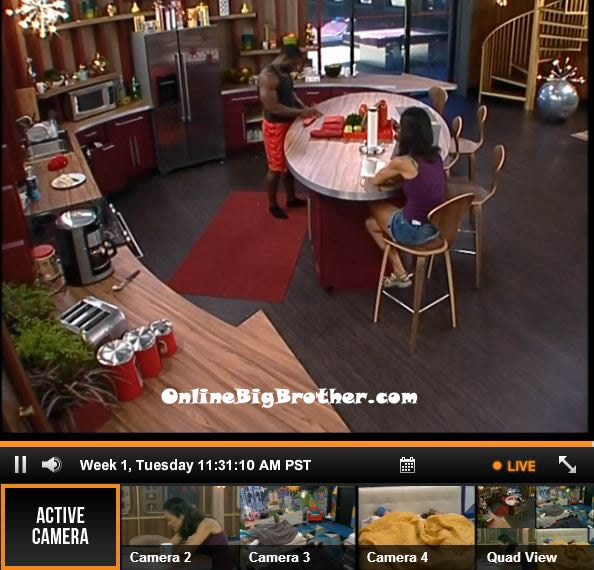 11:45am – 11:55am Howard comments that part of his strategy is staying up late with people but getting up early. He says that it’s interesting watching these young people to see how they react. He says that he has a lot of people watching and doesn’t want to disappoint them. Howard says for him to take advantage of this opportunity he has to mind his p’s and q’s. He says that he knows if he doesn’t hold his tongue he knows where he could go and doesn’t want to go there. Helen comments that it can follow you for a life time now with anyone being able to look up information on the internet. Jessie wakes up and wakes through the kitchen to the bathroom. 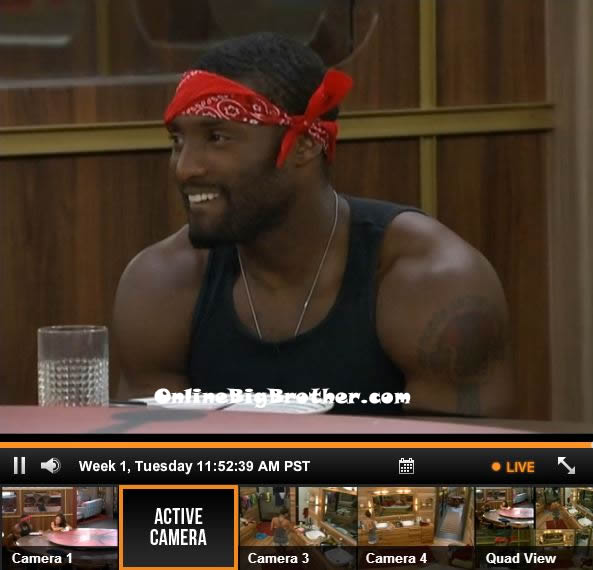 I cannot wait till Wednesday! I feel like I’ve watched a whole season in one week!

I expect Aaryn to go into rage. It’ll be funny.

…and I cannot WAIT for that…

Julie: ‘David…you have been evicted from the Big Brother house’

I would piss myself, if when Julie says “David you are evicted from the Big Brother house”, Aryan stands up, a vein throbbing in her forehead,face all red, she starts screaming…” STFU Julie and go make me some rice biotch!”

Last year week one had the Willie Hantz meltdown.

maybe it’s just me but this feels like the longest first week ever, so much going on

And many more crying filled days and nights to come.
B!tch don’t wake me up to tell me I’m crying

Wow here was some interesting reading. I didnt realize just how bad the racism/bigotry was in the house.

Does Amanda know that the cameras are always on? Just because you are not talking bout each other in the DR doesn’t mean the showmance will not be shown. She clearly insinuated she’ll be having sex with McCrae in the jury house (if it doesn’t happen before that, and I’m sure it will). Still, as dumb as this situation is she is still the most tolerable of all the females.

It’s basically the same thing as Kristen BB12…maybe we’ll get a segment of Amanda’s bf like we did of Kristens!

The idea that she’s even sleeping(not sex or kissing) with another man, will make any half intelligent man think twice, before staying faithful to her. She lost him the moment she stayed in McCrea’s bed longer than when everyone else was in the room conversing.

Maybe the BF is part of her game with him?? McCrea seems like a good dude, she could be using that BF thing to bring him loser, and once she fucks him, he’ll do anything to keep her in the game, even sacrificing himself.

They talk more shit about Amanda then Aaran and her crew

It would be funny if Elissa wins HoH with MVP. She probably holding three powers, HoH, MVP, and POV. She will put up McCrae and Amanda with Aaryn as the third nominee. It would be suck for them and MC alliance will start to crumble.

There would be No reason for production to have a HOH also be MVP, as the MVP is chosen after HOH, and if Elissa does win HOH, the next highest votes would win MVP.

I’m still convinced that the same personal can’t win every week. America would be voting for Elissa every week, whether she’s playing good or not, simply because she’s Rachel’s sister, which we haven’t got a single piece of evidence that she’s as good as Rachel. Her position of assumed “potential power” is the only thing keeping her in that house. Once the “Save Elissa because she’ll win MVP every week” Alliance sees that she can’t win every week, she’ll be completely useless to them.

We’ll check her out in that POV and HOH this week, to see if she has “Rachel potential”, never know she just might be as good as her sister.

The Voices Inside Danielle's Head

The impending break up of Malibu Ken and Country Bumpkin Barbie is near. Wednesday’s episode is going to be must see TV. And the live feeds afterwards should be outstanding. I can hardly wait…

Simon & Dawg. I apologize if I’m overstepping my place here but is it possible to have the names of the houseguest listed under their picture where you update the HOH and NOM’s. With no access to the livefeeds I find it hard to read the updates without knowing exactly who everybody is.
I understand if you guys aren’t able to do it but I figured I’d ask.
Keep up the fine work gentlemen.

Great idea.. I’ll do something more official tonight but for now this might help http://www.onlinebigbrother.com/?attachment_id=58832

Im starting to like Jessie, she has no one and really if she just sits back for a while someone will pull her in. Let the others eat themselves as it will happen. The cool kids will be stamping there feet wednesday night.

I dont like Jessielle, but I do kinda feel sorry for her. She is comically delusional. It is always kinda sad seeing someone like that. (But damn it DOES make for some good laughs lol)

I’m waiting for Jessie to start saying….(after she has hit on every man in there mind you…) “I have a guy back home name Trey. We only went on one date but he is in love with me and I know he will be waiting for me. Wait for me TREY!!”

Elissa should do Rachel’s face when she is shocked.

UGH! The girls are so unlikeable that I can’t help but root for Elissa! She is the ONLY girl to not annoy the shit outta me…

The evil part of me wants Elissa to get MVP again…to show Aaryn that NO ONE LIKES YOU!!!!!

I like Aaryn. Just wait, all you Elissa fans are going to eat your words when the Reilly comes out of her and you get flashbacks. She’s just laying low to stay off peoples radar, but she IS STILL Rachel’s sister. And she got on here because of it which is unfair, imo.

Everyone’s always complaining about how they want new house guests, but then they get a bunch of newbies and people pick Rachel Reilly’s kin to root for. Makes a lot of sense.

Yes Elissa is Rachel’s sister but I’m sure they don’t share the same personality, Elissa is married with kids…for as much as the other girls hate that at least Elissa is not disrespecting them…and better yet not being a vulgar little tramp…like the other girls are, for the most part.

I am not an Elissa fan perse, but she isnt a racist,bigoted trampola. She is conducting herself with SOME morals. I dont have a clear favorite yet….maybe Howard. He isnt playing into the sex,racism games the others seem to be,plus he hasnt gone on a crying jag. Give the HG’s a few more weeks, right now they are all still playing to the cameras too much.

I don’t have live feeds so all my info comes from here. Thanks you guys are awesome!!

So I’m wondering if Elissa is really stirring sh*t up like Aaryn is constantly saying or if Aaryn is just saying it? From what I read and see on tv it seems Elissa keeps to herself and just asks a lot of questions? No sh*t talking at all.

Nope you are right Elissa is not sh!t talking, Aaryn is just stuck on herself. Can’t wait for Aaryn, Gina & Kaitlin to turn on each other!

If you have the feeds, check out 3:06pm cam 3 when Kaitlin is in the bathroom walking around in gray panties that ride right up her ass. Girl’s been blessed by the angels.

Watching BB for sex or ‘skin’ is like watching Two and a Half Men for the comedy….. C’mon.

You need to change the name to thebomb.com cuz you guys are the bomb.
Thanks a bunch Simon! I’ll donate sooner or later 🙂