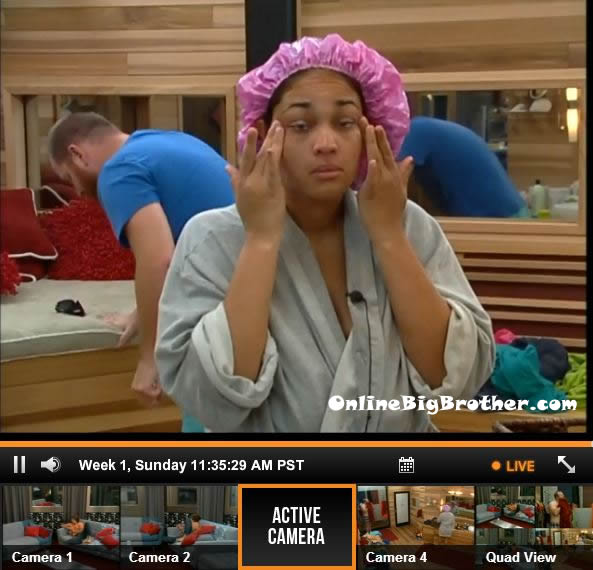 11:15am Candice and Amanda are in the bathroom talking about the hat incident last night. Candice says that she didn’t mean to sit on her hat and that she apologized. She says that Aaryn just flipped out. Candice says I work so hard for my things , I appreciate peoples things. Candice says I am the mad Hatter, I just sit on peoples hats! Amanda tells Candice not to worry about it, its okay. Amanda laughs that Candice the one with the biggest ba-donk-a-donk is in the house to sit on peoples hats. Candice says how annoying someone starting sh*t over that. Spencer joins them. He tells her you can’t reason with it, just ignore it. Spencer tells Candice that she can’t win the argument so just ignore it. Amanda asks Spencer what he’s doing. Spencer says just waiting for the mad hatter to get out of the shower. Spencer tells Candice to just lay low and don’t be confrontational with her. He tells her that in the next 30 minutes there will be another argument and people will forget all about it. Candice asks why David came out and confronted me asking why I sat on her hat. Spencer says he was just defending her. Don’t let it get to you, just drop it and ignore it. 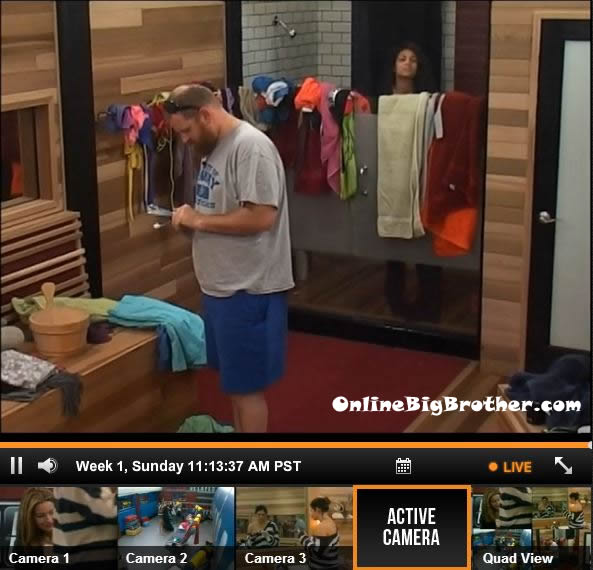 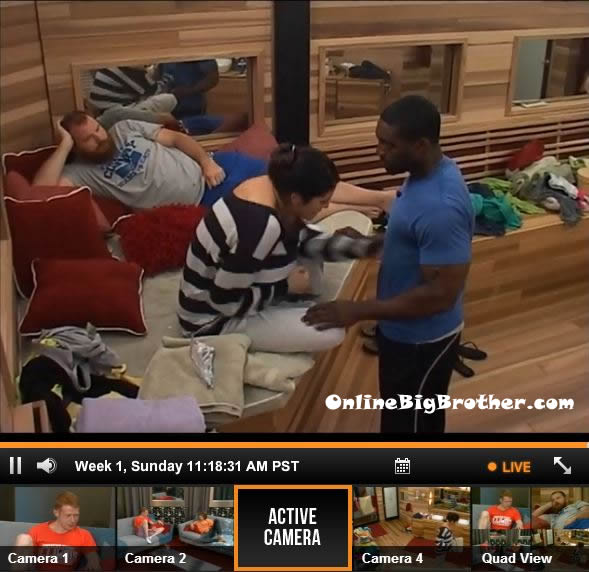 11:40am – 11:57am Andy and David are sitting on the living room couch talking and laughing about random things like how it is being a havenot room for Andy. They talk abotu how they are on an indoor lock down. Andy hopes they are having a competition later today. Meanwhile in the bedroom – Jeremy and Kaitlin are laying in bed chatting. Amanda comes in and gets dressed. She asks if the tub top looks good. Kaitlin says that she doesn’t wear tub tops but that it looks good on you. Amanda leaves. Aaryn gets up from bed and joins them to get dressed. Kaitlin asks her if she slept in her bathing suit. Aaryn says yeah, bad idea. Kaitlin says that’s how you get a yeast infection. Kaitlin says well it will probably happen sooner or later. Well it will, think about it we sit in water all day. 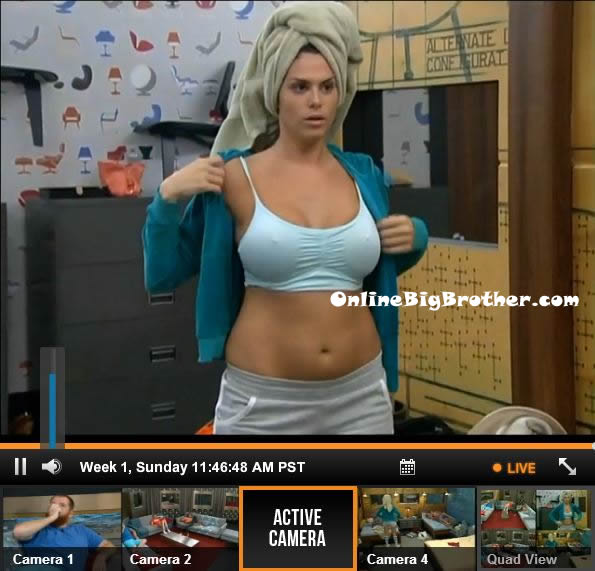 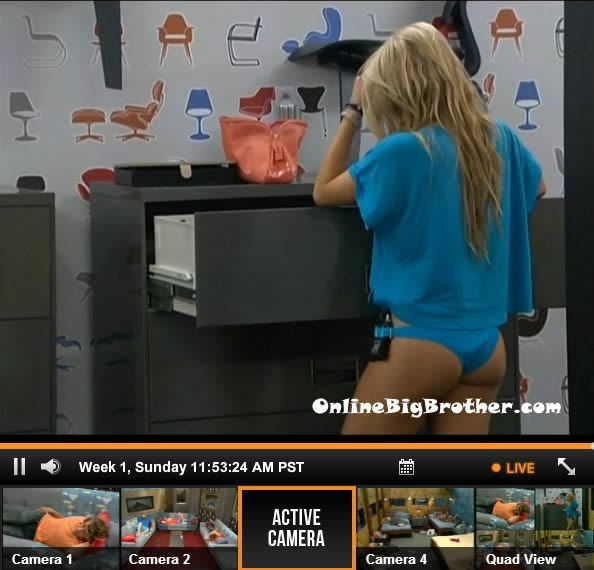 12pm In the living room – Jessie, Spencer, Andy, David and Howard are talking about random things.

Aaryn and Howard are in the lounge room talking. She tells him that he thought he said something about her hat this morning. She thought he said someone has her hat again. Howard says no I was commenting on the artist Blu Cantrell. Aaryn says oh okay. Howard tells her that he would never disrespect her or her stuff. Howard tells her that its disrespectful when someone treats your stuff like that. Aaryn agrees. They leave the room. 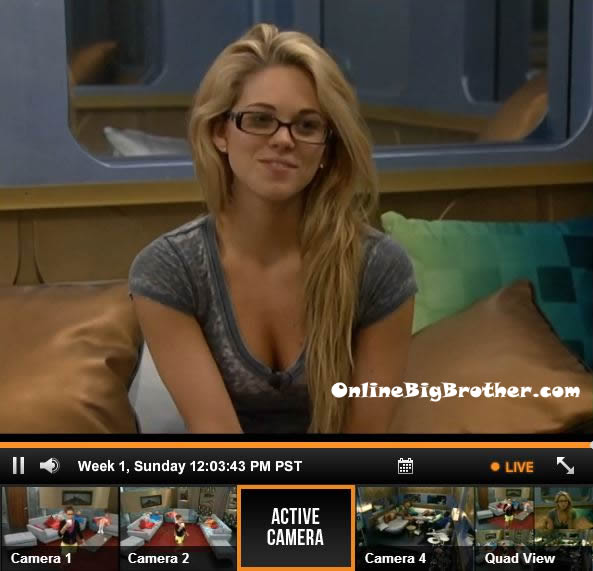 12:15pm – 12:25am McCrae and Jessie are out on the backyard couch talking about the votes this week. McCrae says that Elissa has to go this week and if she doesn’t we know its one of them that voted for her. They talk about the hat drama last night. McCrae comments how he hates when people pull the age card, it has nothing to do with it. McCrae tells Jessie that it sucks that I wasn’t able to tell you about nominating you and Candice. Jessie says that she understands and that you’ve done what you said you were going to do by putting Elissa up. For week one I think you did good. McCrae suspects Aaryn will win HOH and put up Candice. he says then Candice will flip the fu*k out! Jessie says that is why when tension starts to rise in the house I just go to bed. Jessie asks so what’s up with you and Amanda? Are you just friends? McCrae says we’re just friends, she has a boyfriend. We just talk about game. She’s smart. I like her because she reminds me of my friends back home. Jessie says that she felt like she was getting close to Aaryn but now that’s done. She brings up how she was called out for flirting so much. McCrae says yeah Amanda just needs to chill about that I don’t know why she gets so defensive about me. Jessie says but then she apologized to me and that meant a lot to me. Helen and Candice join them. McCrae heads inside to change. They talk about being on slop. 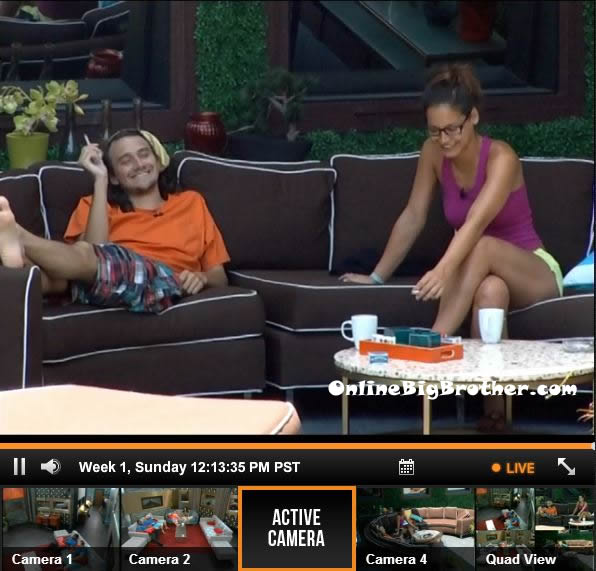 12:30pm Gina and Nick are in the bedroom chatting about random stuff. Gina is making fun of Jessie and her midget arms.. fu*king raptor. Gina says that she is going to wait and see how long it takes for people to wash their sheets, its disgusting. Nick agrees. They hug and he leaves the room. Nick heads to make breakfast in the kitchen. Spencer, Jeremy, David, Helen and Nick are also eating and making breakfast. 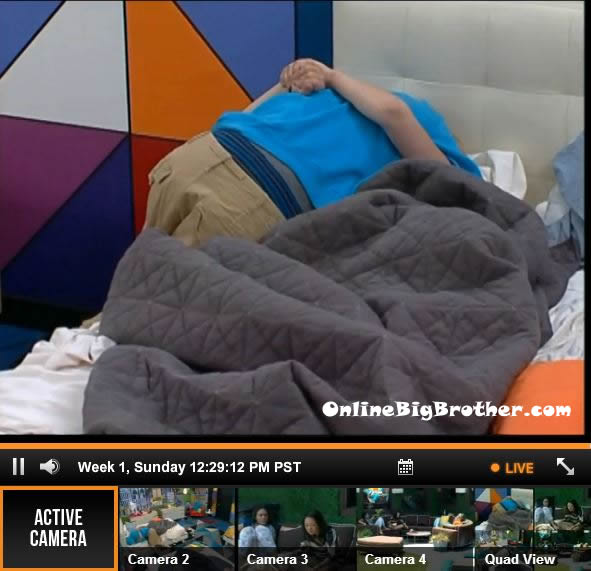 12:50pm – 1pm Amanda is sitting on the backyard couch talking about how hot it is and how she thought in previous seasons they got pool floaties. She comments that they need to do a slip and slide. She goes to the backyard door and asks the others inside if they want to do a slip and slide. The others agree that it would be fun. McCrae is out in the pool. Howard is working out. Jeremy joins him and starts working out. McCrae and Amanda comment on how huge Howard is. Amanda says after the slip and slide they can fill up the condoms and have a water ballon fight. Spencer says I bet Howard fu*ks girls up in bed. Jeremy says yeah he’s the pelvic crusher. Jeremy comments that McCrae is looking pretty swollen too .. his nipples are huge. They all laugh. Spencer says he has a grampa body doesn’t he. Amanda laughs. Jeremy comments that Howard being so huge is discouraging, if I was that huge I would never put a shirt on. 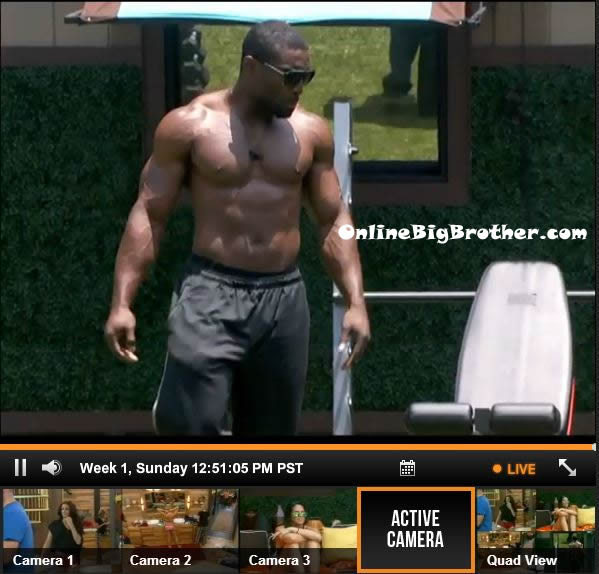 What’s Candace’s brain thinking? Oh wait, she doesn’t give a crap of winning HoH or PoV. She is worst than Monet combine and she is to more self center.

I’m sick of Hatgate. Candice tried to apologize, and Aaryn just steamed about. Spencer or Candice should throw that damn thing over the fence, and blame it on Amanda.

Ha Spencer telling her not to worry about it when he’s the one that stirred the pot by telling Arryn about the hat in the first place. Petty reason to have an argument. I guess rednecks are more attached to their hats than this northern guy was aware.

Guys, I think it’s safe to say, we should all vote Nick for MVP

He may be the only one with a semi-level head!!!

Pizza Boy with the Delivery

I get it that Aaryn is a bitch.. but yeezus look at that ass!!

James
Reply to  Pizza Boy with the Delivery

Her personality kills all potential hotness for me. The best asses in the house are really Candice, Kaitlin, and Jessie…Helen and Elissa have great tone, too! lol #BBAsswatch

Wasn’t a Nick fan after the first episode but that has since changed. He’s seems like the most rational one of the bunch and is clearly there to play the game not be in the drama.

Nick is playing a good game and should get the next mvp. but mvp is a popularity contest so Rachel will win again

i can’t understand why that hat thing was such a big deal.

I heard someone else say that southerners take that seriously and that if you trash their hat it’s disrespectful? I dont know, it’s weird. But if it’s true, you can understand why Aaryn would be mad. It has to have some truth for her to be that upset about it, or she’s totally delusional.

Really starting to like Howard! He’s a pretty good guy it seems like and his gameplay is perfect at this point.

i like howard, too, but i’m still on the fence with his gameplay. i know he wants to keep a low profile due to his physical strength, but he’s coming across more as a floater than a player at this point. i hope he decides to make a move soon.

Aaryn is a little hefty in the butt and thighs. They should call her thunder thighs for all the crap she’s saying about them.

She’s attractive, but her upper teeth make her look like “Buck Teeth Keith ” when she smiles. I’ve seen articles out about her racism today, and as a joke people are calling her “Aryan”.

There do seem to be a lot of racist comments this year. I know that may just be the way some people talk/think, but when you’re in a situation like they are, I would think you’d watch what you say a little more. Also, why isn’t production telling them to stop it with those comments? It’s not that I think they need to be scolded like children, but if they keep it up I think a lot of people are going to go off the feeds or not watch the show just b/c they’re being so offensive.

“Gina is making fun of Jessie and her midget arms.. fucking raptor.”

Funniest quote from this write up imo.

If you don’t want someone to sit on your hat then give the hat some respect and hang it up!