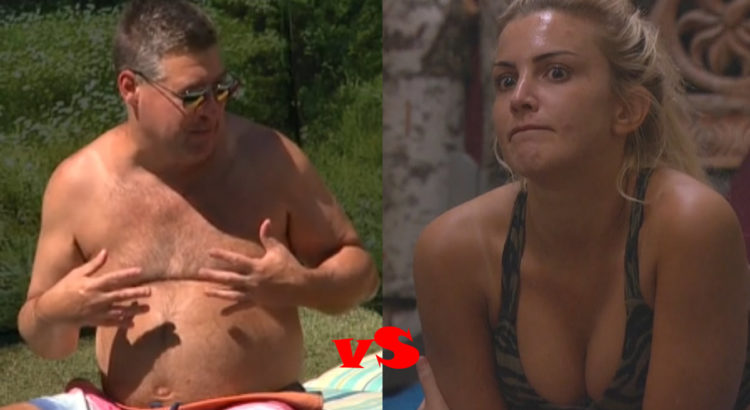 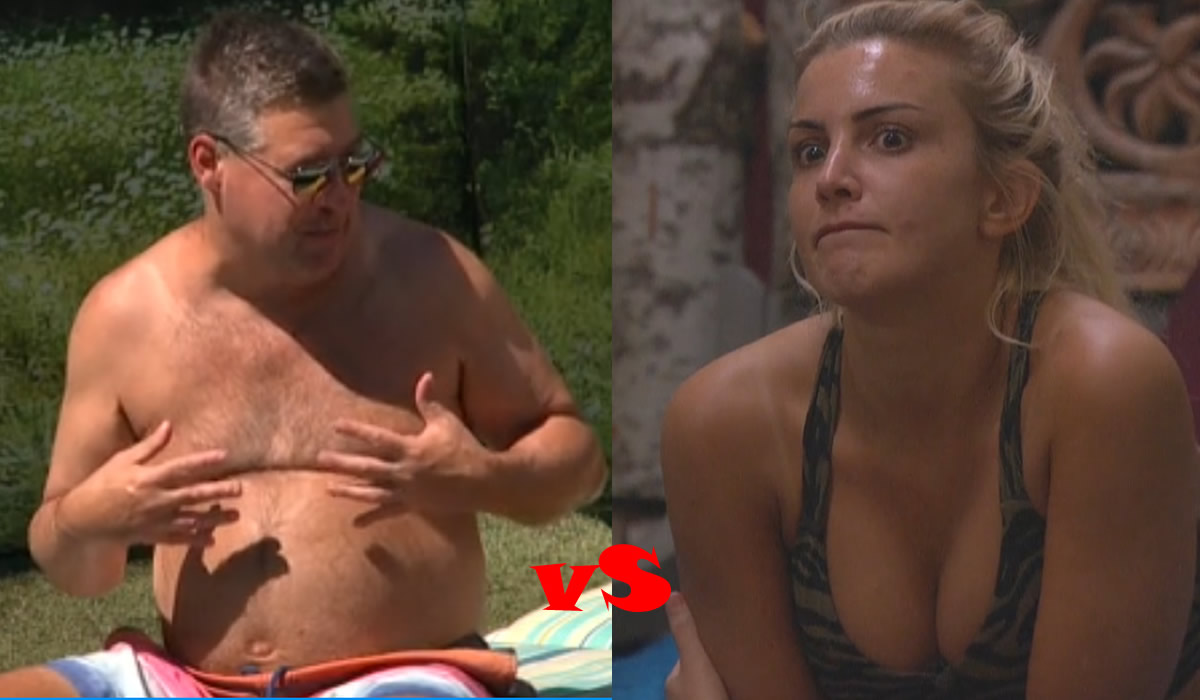 Last week Jack was the first houseguest to hit Jury. Tommy goes on to win the Head Of Household his plan is to do “what’s best for the house” because “I love you all”. The Field trip twist puts Christie on the block, Sis in a chicken costume and Jackson is left with safety.  Tommy nominates Cliff and Kat, His target is Kat. With Christie on the block, the entire fandom ROARS with excitement. The Power of Veto competition is OTEV. The winner turns out to be Tommy. He uses the veto on Christie.

Christie, Sis, Tommy, and Nick pull Cliff and Nicole into a new 6. Christie is ecstatic about it, the boot order has Michie, Holly, Jess. Tommy later tells Cliff he doesn’t want an alliance just a safety guarantee. The Deal man makes some deals and it looks like Kat is getting evicted as of Tuesday night.

My prediction is Kat will be evicted. The Head of Household Competition will be on the live feeds. 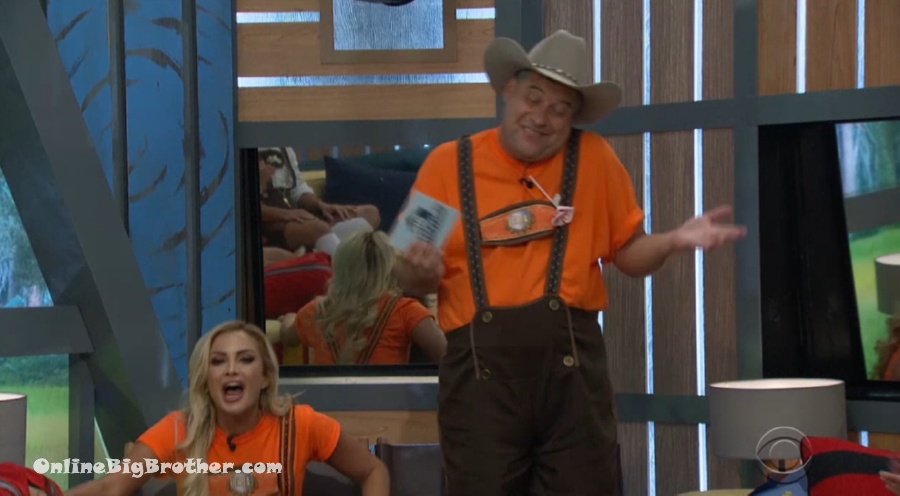 Kat – I’m sad it’s me and my Dad.
Points out how big of a threat Cliff is and calls both him and Nick for pandering to the HOH’s . Conspire away b1tches

Cliff – I love Big Brother. Age shouldn’t and isn’t a restriction I want to stay. 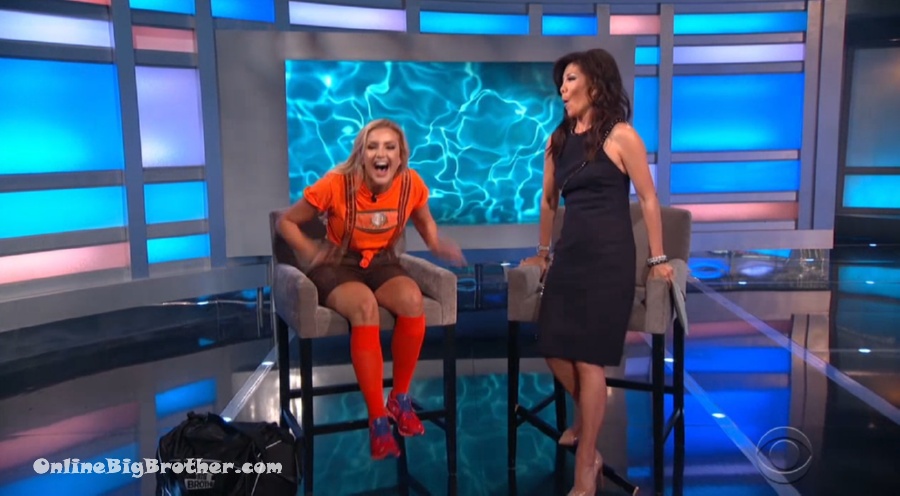 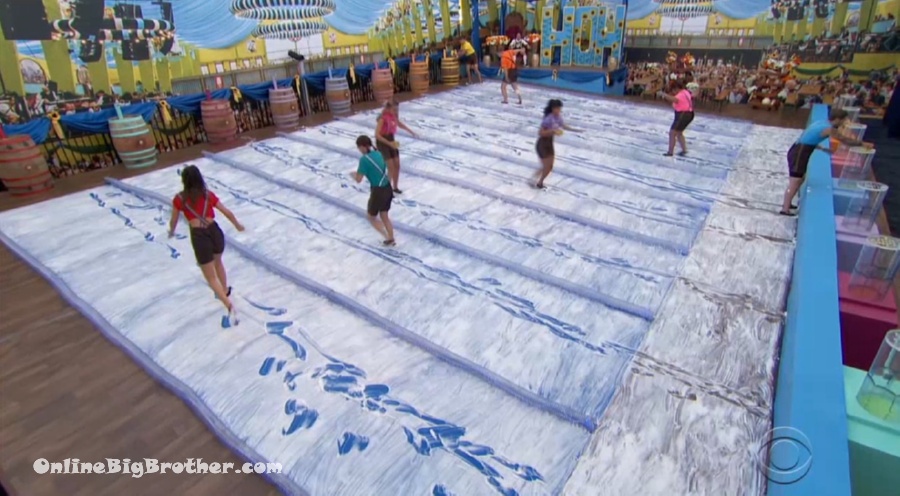 Chaos like this makes things awesome. I think it is time for Nicole to get HoH just so there’s no question what type of game she is relying on to win

Nicole is the supposed swing vote

Nicole had all the power this week and instead of wielding it she panicked.
Jess was given a little information and used it like a wrecking ball because of her own insecurities,she can tear things down but doesn’t know how to build anything in that house.It at least makes it entertaining but will get them nowhere.

Does anyone else think Kat sounds like Sandra Bullock??

I have thought so many times!

The thing is it was very smart for them to vote Kat out. If they hadn’t there’s a great chance she would have won

yeah, i unfortunately agree. nicole had the choice between bottom of a 5 person alliance or bottom of a 6 person alliance, but by voting out one of the 5 she puts herself in position to be in a 4 person alliance. this is her best move if she can see it (plus she’s safe if the 6 get in power). cliff sucks though. such a sellout.

Yes i agree that Clifford the big red dog is a sellout. I get him wanting to ensure his safety but he doesn’t care who he runs over in his quest. I guess its the name of the game. After all this is Survivor NOT Big Brother. LMAOOOOO.

Better her than most all of them!

It’s funny looking at the vote for HOH. Everyone is voting for Jackson now. That is so funny to me.. everyone likes to see it swing back and forth.

Hoping for Nicole / Jessica or maybe even Cliff.

We want anyone willing to put Christie/Tommy on the block.

I think it’s just that he’s the only one who will put up Tommy and Christie.

Cliff creeps me out!

So excited that Jackson won, never thought that would happen. Jackson will go after Christy, after all she just spent all last week talking about getting rid of him and Holly. I hope he can accomplish getting “Big mouth” out. She never stops talking, especially about what a good person she is. (NOT)
Putting her up with Cliff, she may not go. Christy would have Tommy, Nick, Jess, Sis. He needs to put up Sis or better yet Tommy.
Nick or Tommy would use the veto to save Christie. Think please Jackson!

Kat and her speeches. Lol

Now that we are down to 9 players, I guess that means a new “six” will be formed, and the three on the outside will all try to get the 7th spot. ZZZZZZZZZZZZZzzzzzzzzzzzzzz.

“the outsiders just have to wait out the new six, they can’t stay together forever.”

Sad to say, but I saw that, too. That would be horrible to have that little twit in a power position. Somebody trip him, please.

I saw that initially but at the end of the lanes no one sees Jackjaw practically floating accross. I knew he would win.

Worst season ever … I’m back to hating everyone!

VERY DISAPPOINTED IN NICOLE. The four of them together, Nicole, Jess, Holly, and Ugh Jackson, had a good chance to get rid of Christie and co. What made holly and Jackson flip? It doesn’t matter because Nicole went the wrong way. There’s like literally like no one to like literally root for now. There’s no way Jess will survive now. Ugh, what a gross season.

I will be sick if Christie wins. Cheering for her to fall a lot

I seriously never thought that I’d be cheering on Jackson to win HOH, but he’s the only one with the ballz to put up Christie, so … Cmon’ Jackson!

Well HOH result are over on live feeds. Cross fingers Cristie and Tommy on block, or backdoor.

Unfortunately this comp fits the strengths of Nick and Analice. Dawg and Simon, it is going to be another tough week to stomach. May the force be with you.

Who is rooting for Cliff??? He’s a backstabbing weirdo.

I second that
Reply to  Michele

It’s a sad day when you have to hope Jackson wins. But it’s the only chance to get rid of Christie. So done with Cliff.