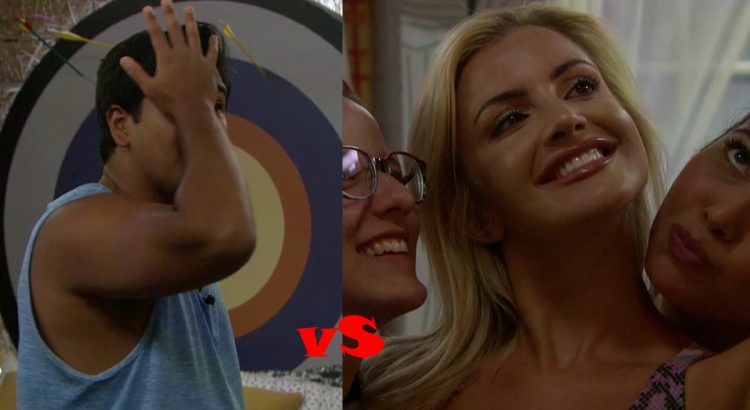 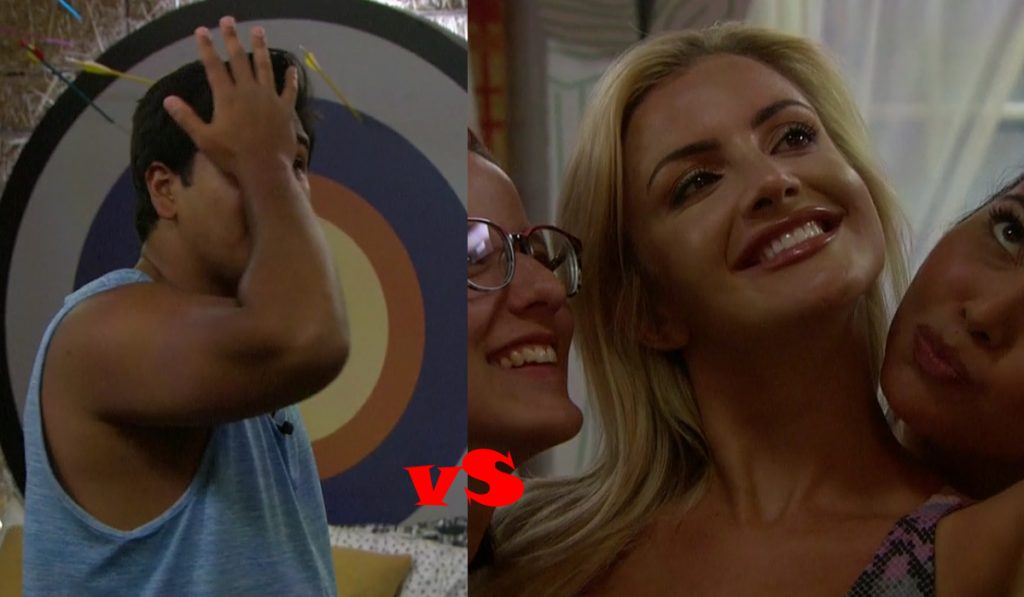 Hey, folks here’s the week one wrap up for Big Brother 21. While it’s been a slow week compared to past seasons there’s been plenty of game and some interesting conversations. We have a lot of strong players in the house this year. I dare say this might be the strongest bunch we’ve seen in a while.

Lets start by taking a look at the houseguests rankings. Three trends we will zero in on that will be telling about the houseguests and how the week went. Bookmark this page to submit your ranks every day

Key events on the live feeds.

Results from the Live Show

A live twist in the game will be unleashed and promises to have everyone’s head spinning (can’t wait)
The evicted houseguest won’t be sent home they will continue to be in the Big Brother house. The player is out of the game but is not out of teh house. 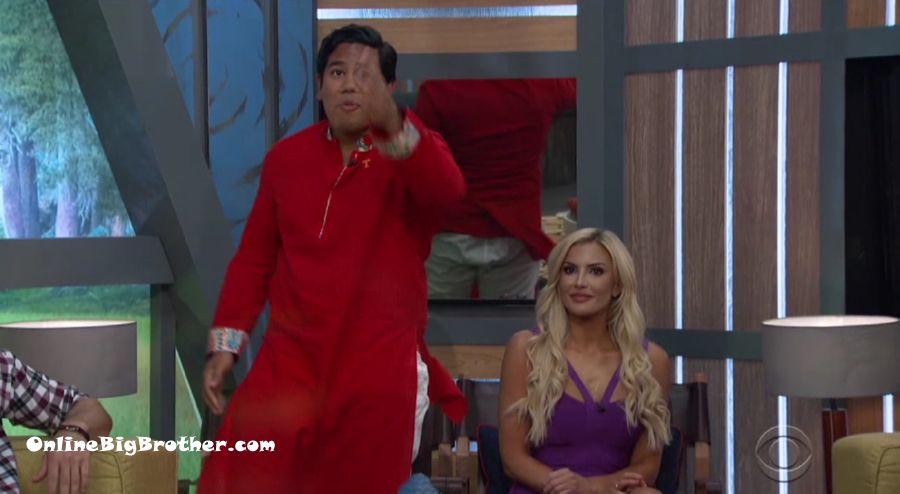 Ovi – I’m not done learning yet.
Kat – so to keep it short and sweet… I’m loyal to those that are loyal to me

Ovi is evicted but not really.. “Camp comeback is now open” 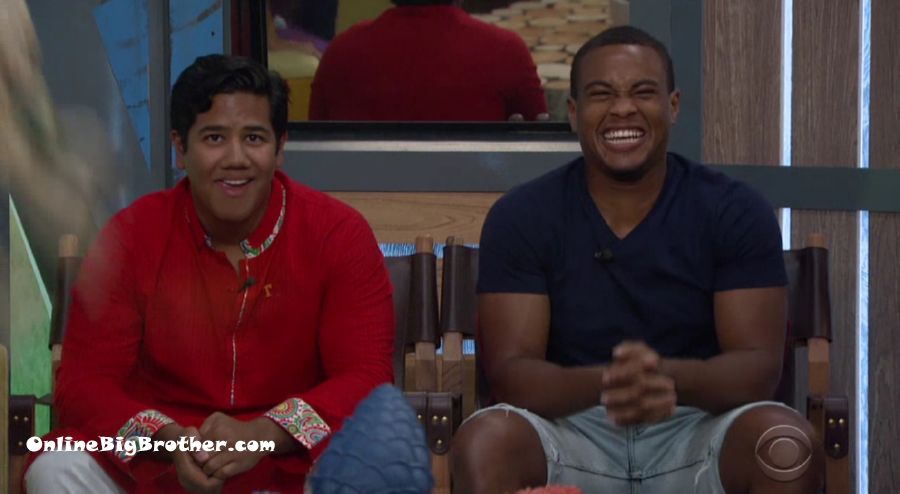 The evicted houseguest will not be leaving the Big Brother Housebut they will continue to live in the big brother house. Camp back doesn’t compete in challenges and isn’t part of ceremonies.Julie highlights that Campcomeback isn’t a nice place to be members live upstairs but it’s not comfortable

Campcomeback will continue to play the social game 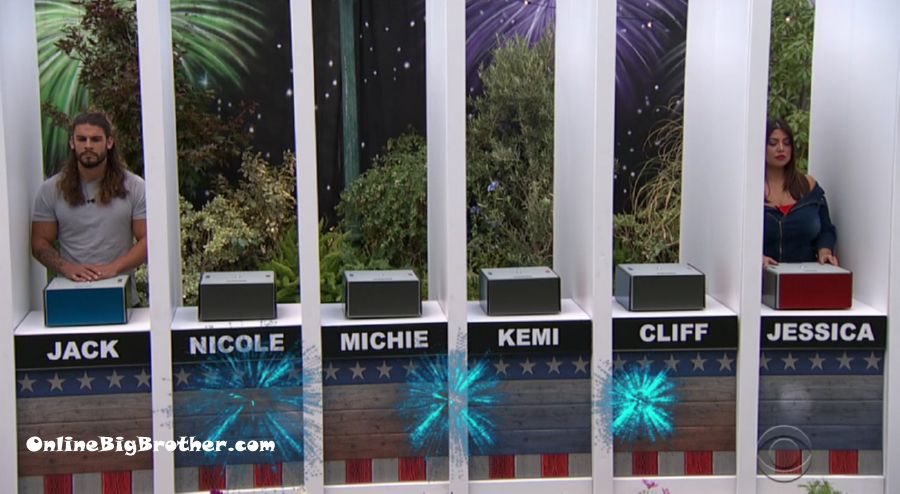 Ovi and David can listen to the competitions 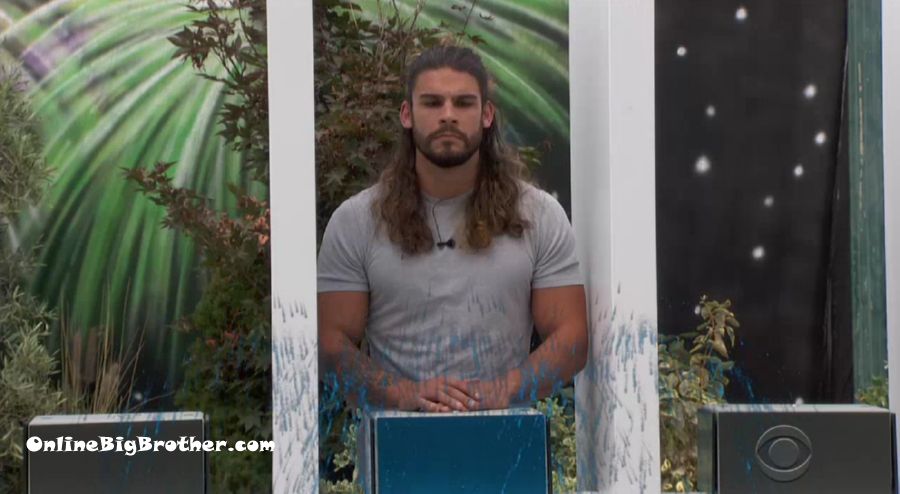 Jack is the New Head of Household 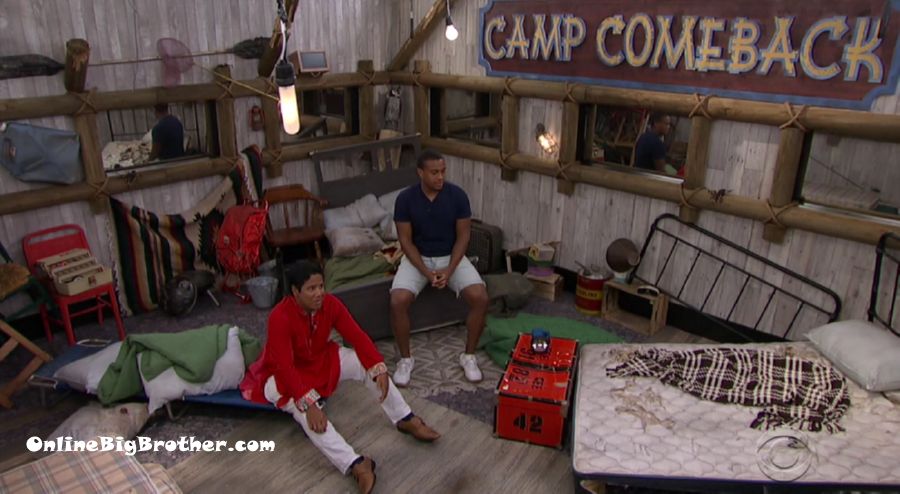 I wonder who will be more angry about the twist

For sure Jack but Christie will cry enough for everyone because that’s what she does best.

Judging by Jacks reaction and face as he stepped over the center table he is the most pissed. I hope they keep jack till the first 4 then boot ? him.

Camp Comeback? Why does this sound like Survivor’s Redemption Island?

i do not understand the camp comeback

I’m sure they liked how it worked and figured it would make good TV. Plus no one has to leave and they can keep up the drama because imagine if Kat was voted out and she had nothing to lose…Jackson would need a guard.

Say what – Camp Comeback! I actually love the idea of the outed houseguests staying in the game to see how it impacts how they play! Did you see how Jack was sweating bullets! Loved it.

I’ve been thinking the same thing.

How do you think Jack will handle his HOH and Camp Comeback?

I’m hoping that a week of his nonsense will send him out next week! I also think he is going to go for a weak player to compete against in camp comeback. Thoughts everyone?

That’s something I hadn’t thought about. Jack knows he is target #1 so no need to take out a strong competitor if he thinks he might also go to Camp Comeback to make it easier for him to get back in the game.

Not happy with jack winning HOH but because he has power will he let the power turn him into a bigger Jacka** and doom his game?

Does Jack even realize how he comes across to others?

Tom is a Canuck
Reply to  Ultra

He was talked to by the producers. He was told that the live feeders were upset by the nasty things he was saying. He has toned it down a lot.

I’m kinda disappointed that Cliff didn’t vote for Ovi. He could have given him one vote. I can’t believe Jack won HOH. So bummed.

I think Cliff is thinking longer term. He just got pulled off the block so he does not want to make any waves.

hmmm. Jack: targets at first glance: jess for coming in second. kemi for wanting him out (laying blame on her exclusively). bella because she knows he lied to her (he’ll call it because she doesn’t trust him).
outside chance: house tells Jack Christie has been badmouthing him. she tries to say it’s separation so nobody figures out they are in an alliance. he won’t buy it.
outside chance 2: nick for obviously throwing (they did memory games last week).
outside chance 3: kat as a pawn.

Ultra
Reply to  another name

Totally agree. He will nominate Kemi with such a glee and mince no words. He second vote will likely be Jessie A. she’s a gal, B. she played well in the HoH. C. She’s not into him or his ego.

Me: “Hey Siri, set an alarm for whenever Jack uses intelligence instead of ego in his HOH”
Siri: “Setting alarm for never.”

Well, well well. As per my previous page post, I wondered how “David” would factor & got my answer.

IMHO the most interesting aspect of the evictees living in the house is how much information Ovi specifically can pass along to the others (& what the others can share with him). No doubt the fake 5 alliance made with Ovi will come out (which will put the Jacks/Christie (& was Tommy the 5th?) in a bad light. Particularly if he shares that detail with Cliff & Sam who also have alliances with the jackholes.

Other arbitrary information like the Jackholes sharing Ovi’s power with so many people is sure to get back to him (if it hasn’t already). Couple that with David having every reason to target Mickie (& the likelihood he’ll learn Mickie really wanted him out). And whatever semblance of trust or believability the JJ’s had will be shattered.

Only Nick, Nicole & maybe Cliff garner any favor with Ovi b/c the first two warned him he wasn’t safe & Cliff probably told him I have to vote with the house so I’m not a continued target. Sidebar: Nick so threw that comp lol,

Likewise, with Jack winning HOH who wants to bet at some point someone spills the beans to him about how much Christie was running her mouth? Christie also likely catches further damage b/c of all the side alliances & working both sides (just like the Jacks are) b/c she’s made a ton of side deals.

I LOVE that these players will be in the house. They have NOTHING to lose by sharing intel, being a sounding board or if they want to band together to conspire HUGE lies about whoever they want revenge on or simply to cause conflict/drama.

The house was already a mess b/c no one can keep a secret & outside of the black widows or duos the majority of the alliances aren’t only disloyal to their allies many either don’t like each other or have intentions of targeting each other! I don’t generally like The Powers That Be (TPTB) interfering but in this case, I’m thrilled by the twist.

Now if only the first 4 get to battle back do you put up with jack and vote him out at 5 so he has no chance to come back?

Jack makes his first HOH-itis move calling a house meeting to tell everyone NO GAME TALK with camp comebacks (& Christie stupidly backs him). HELLO McFly – that only shows you trying to manipulate/control and PROVES you have something to hide that they know!!!!

B/c he’s HOH no one is going to tell him to his face screw you Jack. BUT I would bet this little power trip will only serve to push the majority of the players TO TALK with that group.

My question is: Is Ovi’s power in play? That could really put a hitch in someone’s get up especially being that they can’t do a thing to Ovi.

I see Jack’s HoH cementing his role as the majority’s next target. He will expect everyone to do as he tells them and he’ll alienate quite a few folks. I’m also thinking his targets will divide the house.

I hate unanimous votes, I fear a season where people keep asking what the house is doing.

I was thinking that as well but sadly, I feel like his power no longer holds any value…UNLESS he gets back into the game then he ‘could’ use it. Maybe that affects how the Jack”a**e* treat Ovi.

He is out of the game so I imagine his power is dormant. If he is the one to return he’d have a week or two to use it is my thought. It would be crazy if he could use it though…

if it holds no power, jack(son) doesn’t need to know that….

why give ovi that power if he couldn’t use it?

gee. I’m sure this house meeting is a great idea.
no really, jack. keep going.

ovi thinks it was kemi and (correct me if i’m wrong) bella that ruined him being saved. doesn’t think Jack lied.
even cliff did a spit take on that one. further he thinks david is abrasive for asking who ovi wanted to win hoh. okay there ovi…. have another sip of koolaid you suck up to the alphas that just voted you out fool.

I’m so confused – didn’t Ovi have the power this week to remove himself from the block and force the HOH to nominate 2 other houseguests?

another name
Reply to  Sylvester

his power had to be used after initial noms. it was useless after the veto meeting.

Jack is not my fav. Not even close. But I think its hilarious after a week of listening to how Jack is so stupid that he wins a question comp lol

This will definitely make things interesting…NOT we already know how Jack will operated. He will go after Kemi and someone else who doesn’t god-worship him. So he can watch some blinky, flashing lights and this makes him not stupid…not buying it!

who will be the first person to secretly try to make a side alliance seperately with each of the twilight zone campers?
my money is on jack and son. because the royal edict obviously doesn’t apply to them.

I think NIck b/c he told Ovi he wasn’t safe & my hunch is he’ll also tell Ovi that Jacks made the decision NOT to keep him & didn’t try to switch the vote.

Nick gave a subtle warning by comparison, but I think Nicole was more blatant last night in telling Ovi he didn’t have the votes he thought he had.

Am I the only one who thinks these people missed a HUGE chance to get rid of Jack???

another name
Reply to  Marry_Me_Analyse

If what later became the black widow girls and the guys out for jack’s demise had all communicated with each other and with Christie, it could have happened. That’s the big issue. the lack of communication and lack of trust at the time. If they’d all gotten with Christie in a group and she could actually see the numbers, it might have given her the guts to do it.