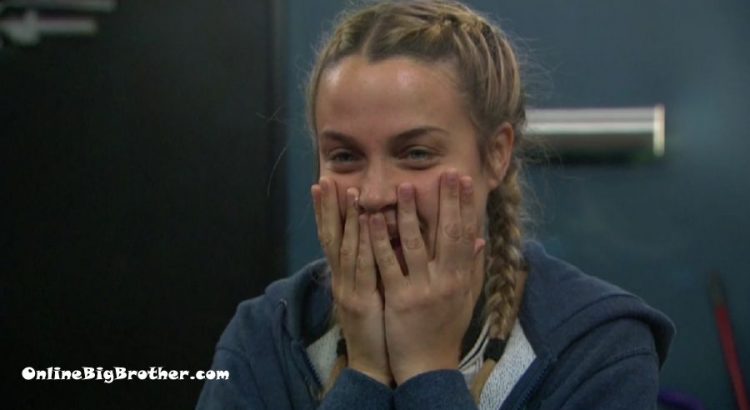 Big Brother Spoilers – Christie won the HOH, Nominated Cliff and Kathryn. Veto players were: Christie, Kathryn Cliff, Sam, Jack, Nicole. POV was Host was Tommy.  Sam wins the Power of Veto, it was called Food fight. Sam plans on using the Veto on Cliff. Christie plans on putting Kemi on the block as the replacement.  Ovi is the second choice. The Veto Ceremony is today.

7:30 am – 8:40 am Cliff is the only one up. Eats a Banana, Drinks some coffee goes into the boat room and talks to the camera a bit.
Cliff believes the Veto will be used him. Cliff feels good about his position in the house he’s gotten over the “old Guy” stigma. Cliff goes over his strategy of having relationships with everyone in the house. Cliff thinks this has for the most part been accomplished except for with Jessica. He’s going to work on her next.
Cliff – who hadn’t heard of the dukes of hazard .. I wasn’t around when the Beverly Hillbillies was a show or I love Lucy but I know the show. I can’t imagine a single person in my age group who when I mentioned that show wouldn’t immediately start singing the theme song or at least thinking it in their heads. We all watched it but these people don’t have a clue, Boss Hogg doesn’t mean a thing to them just a whole different set of life experiences I’ve had them they’ve hadn’t hopefully I can use that to my advantage. As long as I don’t come off as too boastful or arrogant.

9:15 am Lights start to turn on in the house and we hear music for a few minutes before the feeds go to fish. (It’s been a while since I’ve heard the morning music) 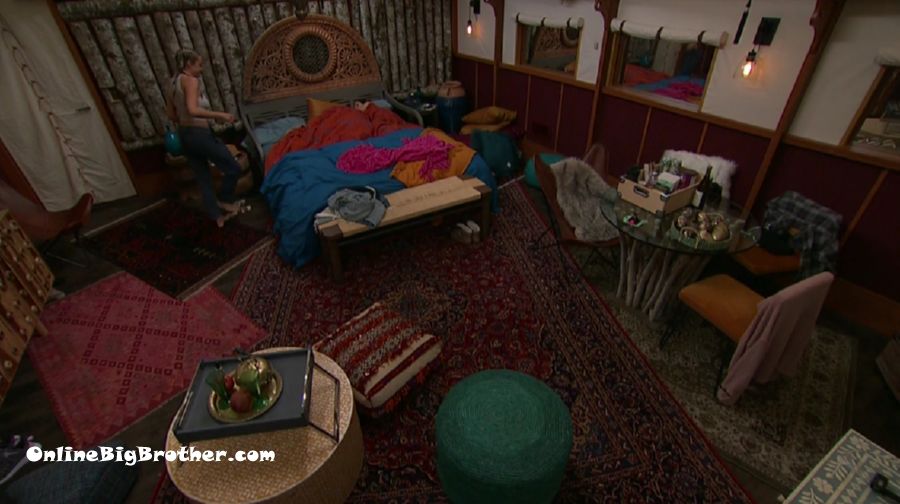 9:27 am Christie, Holly, and Sis with Jack in the bathroom.
Talking about “Board creepy a$$ people” that watch the live feeds round the clock. Christie has a bit of an idea about how the live feeds are.
Holly wishes they were told about the feeds more because she’s never watched them.
Jack starts complaining about Jackson being really sweety last night and he got him with an “Aligator death roll” 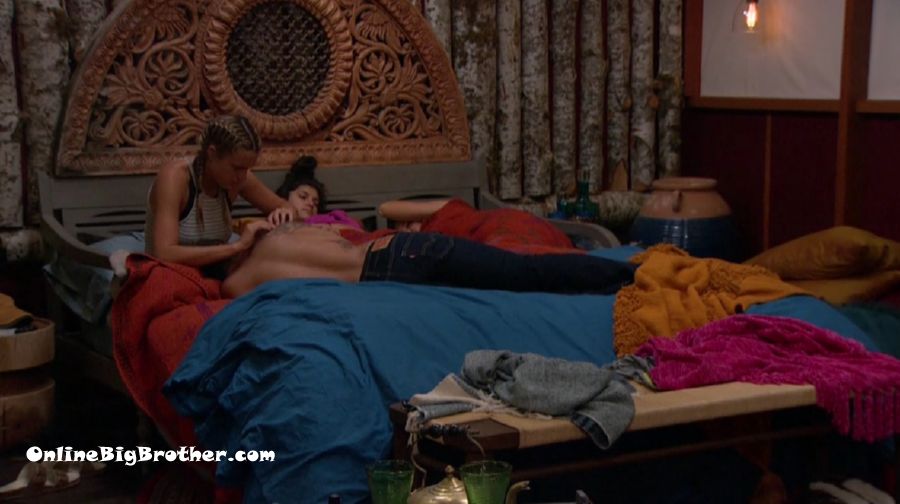 Christie – I’m not looking forward to blindsiding someone today …
Christie – I hope America doesn’t think I am evil
Holly – they won’t
Jack says it was his idea to blame it on him.

Nick joins them and starts complimenting the girls .. they laugh and say he’s making them all feel so beautiful so they won’t evict him. 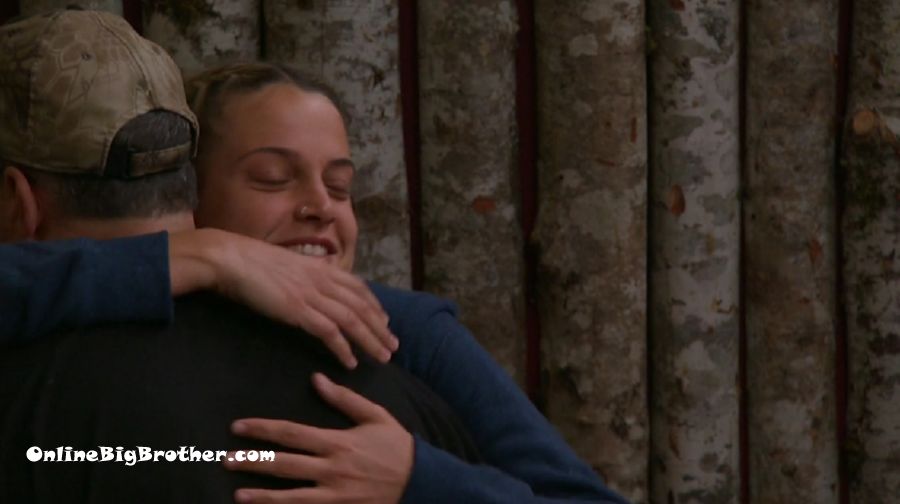 Cliff says he’s feeling better yesterday was tough he was focused on the game.
Christie says yesterday a lot of people cried. Christie, Kemi, Jackson, Tommy, Bella,
Christie says she prayed on what to do.
Cliff – game wise I’m cool
Christie – did you talk to Sam at all did he say he was going to use it on you.

Christie – I think he’s going to use it on you
Christie – winning HOH is a tough predicament you don’t want to hurt anyone
Christie – between you and me Kemi never did anything to me to make me wanna be yo know what I don’t like you and I don’t like what you did so I want you to go home. when a majority of the house saying Kemi’s gotta go, Kemi’s gotta go. she said this about this one.. you kinda just want to go with what everyone else said
Cliff – that’s all you got to go on
Christie – it doesn’t feel right to me to be like a sell-out but this is my game. What’s worth more me feeling bad about something or me going against what the house wants and going rogue and saying screw you then I’m target number one next week

Christie mentions how Jack doesn’t talk game with her.
They talk about if anyone in the house is really acting up who they are. They wonder who the villain is. Cliff suggests they already evicted him. They laugh at production scrambling to get a new villain.
Cliff and Christie agree they have nothing against Kemi.
Cliff – she played hard everyone wants to distance themselves… it’s not like her personality is such that she’s a magnet.
Christie notes that Kemi doesn’t really talk to people. They agree Kemi listens which make her more dangerous. 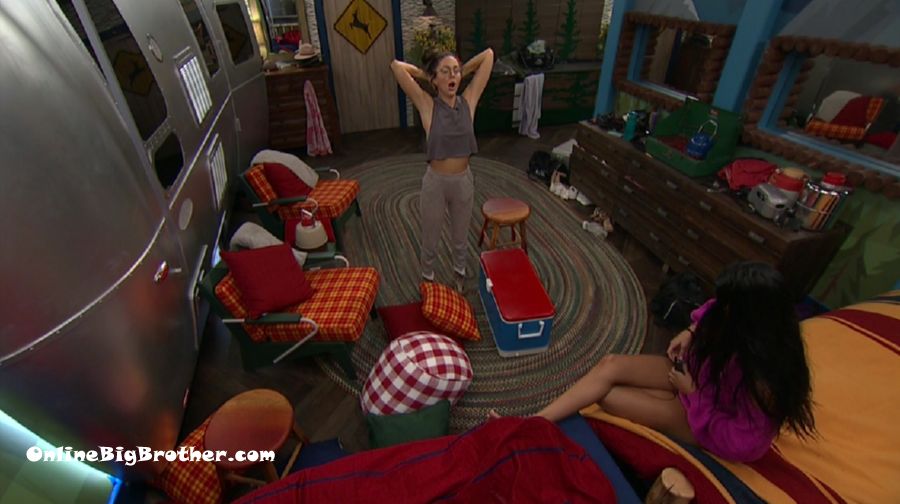 10:12am Holly and Kat
They count 6 days until eviction there must be something in between.

Holly – I do my Whacktivity on Monday regardless, me Jack Jackson sam and Tommy. 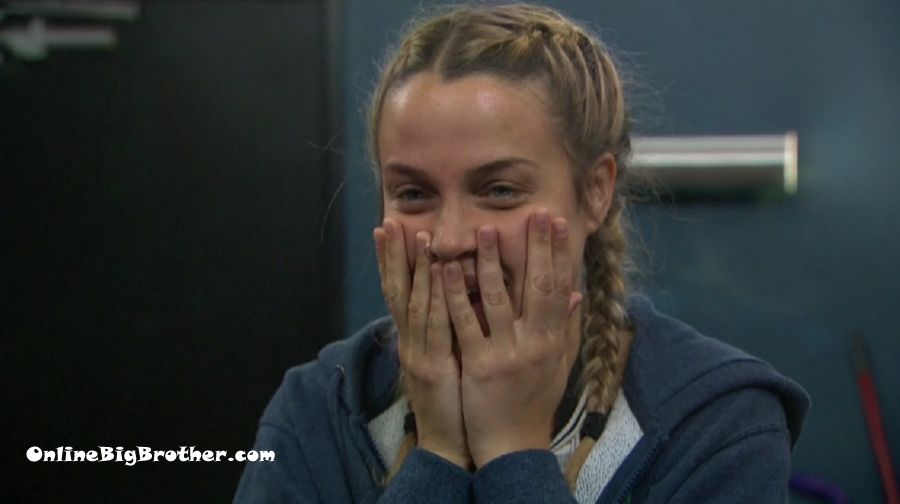 10:26 am Christie and Kat
Christie – I’m just nervous because I know this is going to suck
kat – Eviction isn’t until Wednesday
Christie – how do you know
Kat – the DR told me
Christie – F**** .. I’m the HOH until Wednesday you’re kidding me
Production – “you are not allowed to talk about diary room sessions with other houseguests ”
Christie – so the veto meeting is not today
kat – there’s not a live show
Kat mentions how there will be two powers going into the eviction but nobody is competing in them that is on the block.
Christie – at least she (Kemi) doesn’t play
Kay – I know oh my god can you imagine
Christie – I would have lost my mind
Christie tells her she’s fine she spoke to Cliff upstairs.
Christie – Sam is 100% using it.. like 100%
Christie says Sam is a “savage about it” he’s going to use and doesn’t care if it puts blood on his hands because Kemi isn’t going to jury
Christie- I’m confident with what is going to happen.. you are not going anywhere, Cliff’s not going anywhere it sucks that she’s the one but everyone is on the same page it makes it a little bit easier. 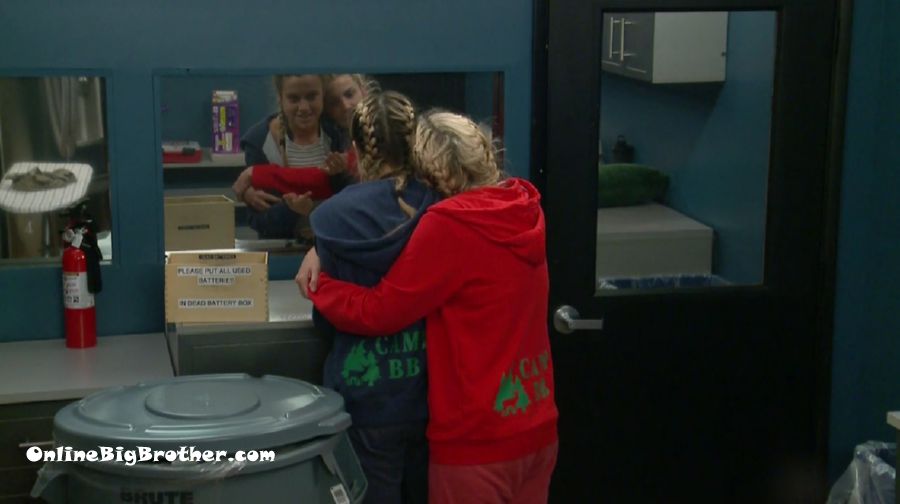 I’m already tired of them talking about creepy people watching the feeds.

That’s the stupidest thing to say, if it weren’t for “creepy people watching the feeds” then cbs wouldn’t make any money, no money, no show, period. They know what they are signing up for. They are voluntarily spending the summer in a place we’re there are 100 cameras watching their every move for the chance to win a half million dollars. HELLO,THAT’S BIG BROTHER!
The people watching the feeds aren’t creepy, they are reporters, taking notes and posting them to us who don’t watch the live feeds, giving us the opportunity to discuss. Thanks for all the hard work Simon and Dawg.

Btw…does any one else think the prize should be a million at this point? Maybe they’d get better contestants.

There are creepy watching the feeds for every possible glimpse of nudity even if it means scrutinizing frame by frame like an obsessed CSI. But most of us just like to see the stupid things people do when they are stuck with little to do for months.

So much can happen before the veto ceremony and, especially, before eviction. It sounds like Nicole and Bella (like Christie) are not wanting Kemi to go up.

At this point, the safer play is to move forward with Kemi. It will be interesting to see what happens.

Apparently before he got on the show someone (maybe more than one) saw him with a book that said ‘how to be a good leader’ or some shit. I forget the exact title but it apparently made people nervous.

That was dumb of him to have his book out in public like that. You never know what people will think of the littlest thing apparently.

His mistake was LWB…Living While Black.