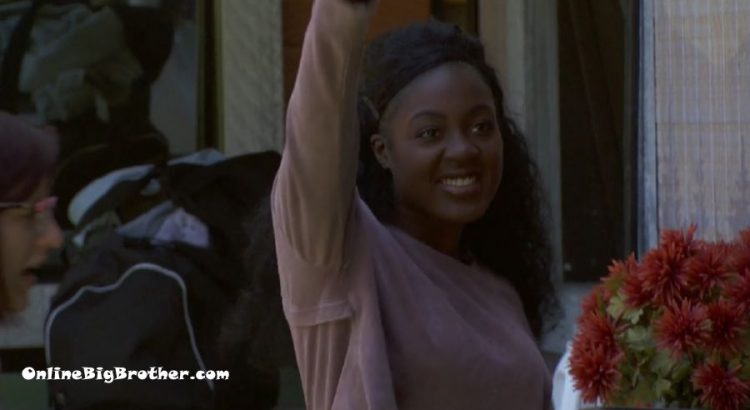 Big Brother Spoilers – Christie won the HOH, Nominated Cliff and Kathryn. Veto players were: Christie, Kathryn Cliff, Sam, Jack, Nicole. POV was Host was Tommy.  Sam wins the Power of Veto, it was called Food fight. Sam plans on using the Veto on Cliff. Christie plans on putting Kemi on the block as the replacement.  Ovi is the second choice. The Veto Ceremony is today. 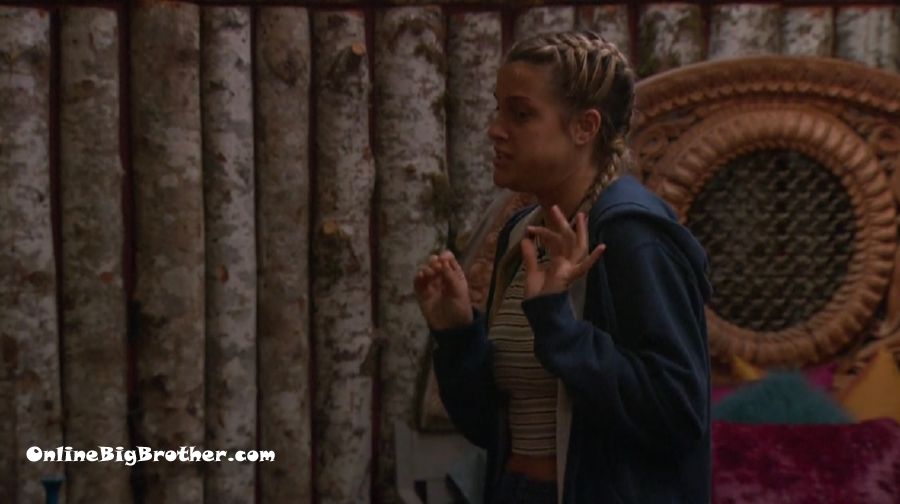 Tommy – it’s funny about jack that we both got a Vibe about him. I wanted to tell you that too
Christie – it’s hard to get alone, me and the girls talked about him too. Sis straight up said she’s like he’s so f*ing hot that’s why it’s hard because you want to flirt with him every time he comes it so easy to feed into it.
Christie -she likes but honestly when we get down to 8 I want to f*ing get him out bad
Tommy – yeah yeah
Christie – she’s like he ‘s playing everyone and he’s playing it good
Tommy doesn’t think so “everyone is on to it already”
Christie – even the way he flips his hair he’s just playing into it so much
They agree to keep playing into Jack’s flirting for now.
Christie says she feels like Jack and her are being paired as an item “we’re not”
Tommmy – I know
Christie – I would rather he did his thing first with all the other girls but I don’t want a target on me like we’ll be friends after his regardless we’re cool we got each others back
Christie goe son about how Jack is micromanaging everyone in the house they should all just focus on their 3 and their 8
Christie – he’s a player.. not just a playa .. I’m not going to let him play a better game than me
Tommy speculate that Jacks is throwing Christie says he wanted to win the veto yesterday
Tommy- he’s great for us to work with
Christie – I don’t want to be too close to him so we get thrown up
Christie wants to scream out to the house that she and Jack are not together.
Sounds like Nick said something in public about Jack and Christie that shone a light on a “showmance” (there’s not)
Christie – I want to be independent I don’t want to be tied to a guy like that
Tommy says at some point if they are in a situation like last night he’s not going to be able to back her up as much

They mention how not one person of Jack’s family has signed a release. They want to see his HOH pictures. They convince themselves that jack is the villain this year he’s just super “hoit” and “Flirty”
Christie says jack’s flirting is calculating “dude you know me 8 days don’t try to use my sh1t on me”
they agree he needs to keep thinking he’s in control
Christie doesn’t want America to think she’s following around the “Hot Boy”

Tommy says he’s really good with Bella
They agree SIS is a lot like “Nicoletta” (Christie’s ex)
Tommy says he had a fight with OVI the other day because he wanted people to see he can have enemies.. “I was teasing him why he was protecting his cookies”
Tommy – Like really asking. He must have.. it was a trigger point everyone is making fun of him
Christie laughs “hey I was bugging him about the cookies two”
Tommy – he went off on me then I went off on him even more and I started cursing him out but with a smile behind it. Enough that I HAD TO APOLOGIZE after it. (Wow production stepped in)
Christie laughs, “That’s good I don’t want them to thin I just love everyone”
Tommy – I want people to see this side of me.
Tommy – I’m going to throw competitions that’s my plan.

11:45 am Kat and Holly
Holly says she woke up this morning and say Bella wearing her hat “should that be annoying or no”
Kat – yeah
Kat says yesterday Bella was really weird. She told kat that there is a lot of little alliance’s forming. Jack and Jackson are in a final two.
Kat – dude like why are you coming at me about someone I’m close with.. just trying to stir something up
Holly – who cares final 2 is a long way off
Holly – I think Kemi is taking the fall for Bella’s actions
Kat – I think to

Kat – in the beginning, it was all Bella she was instigating it (pre-feed drama)
Kat – I think Kemis is actually really sweet She super extra and dramatic I get it.. she’s taking the fall 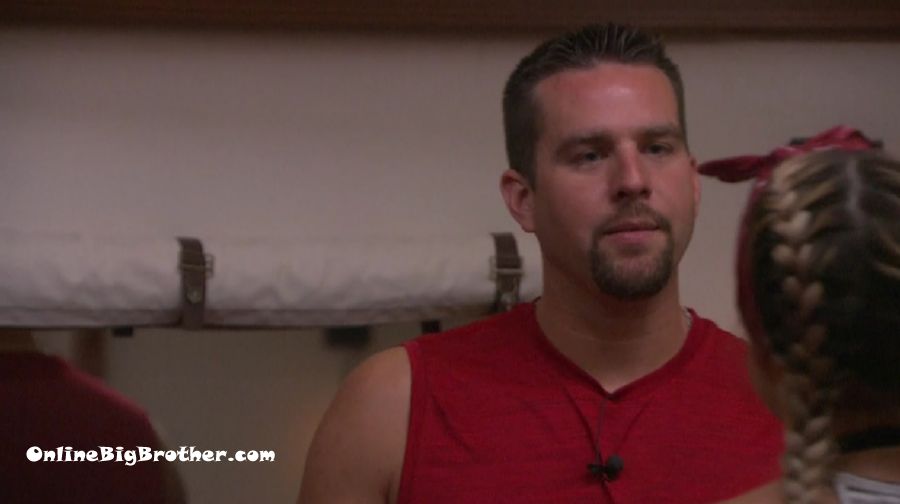 11:56 am HOH Christie and Sam
Christie – do whatever you want to do. Do you know what you are doing? Cliff?
Sam – yeah, I’m going to see if they tell me I have to be sad if I have to be sad than alright. If they say it doesn’t matter. Feeds cut
Christie goes on about not wanting to go against the majority of the house. says they all feel the same about this decision.
Christie adds that Kemi doesn’t add anything social to a room
Sam points out she doesn’t “Contribute much either ”
Christie – everyone is drying dishes everyone is washing dishes everyone is helping
Sam – or washing the one fork she uses.
Sam – I’ve decided to use the power of veto on Cliff. Cliff, you deserve to be here you faced banishment your first day if there is anyone where that should be here at least for another week it should be you plus I can’t allow you to sit here on your sons birthday
Sam – why not let her think that KAt’s it (tell Kemi she’s not a target)
Sam suggest Christie talks to kat and tell her she’ll slam her a bit in the POV meeting so they don’t have to deal with a “blowing up Kemi”

Sam says that Kemi didn’t even come up to him asking him to use it on her. Kemi has no idea she’s going on the block.

It doesn’t take a fricken scientist to realize the bottom feeders are Nicole, Jess, Ovi, and Kemi.
Christie – 100%
Sam – Social wise
Christie – maybe they have a power alliance we don’t know about 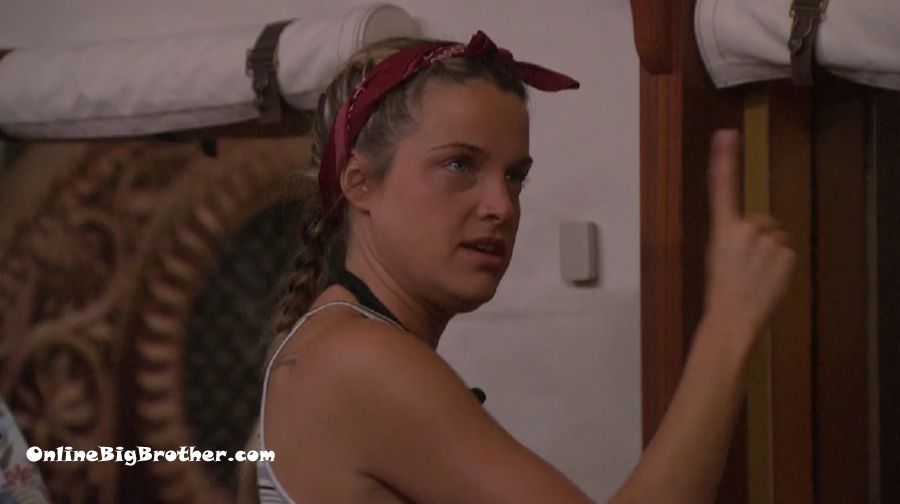 Cliff joins them. They’re worried about kat getting paranoid and losing it. 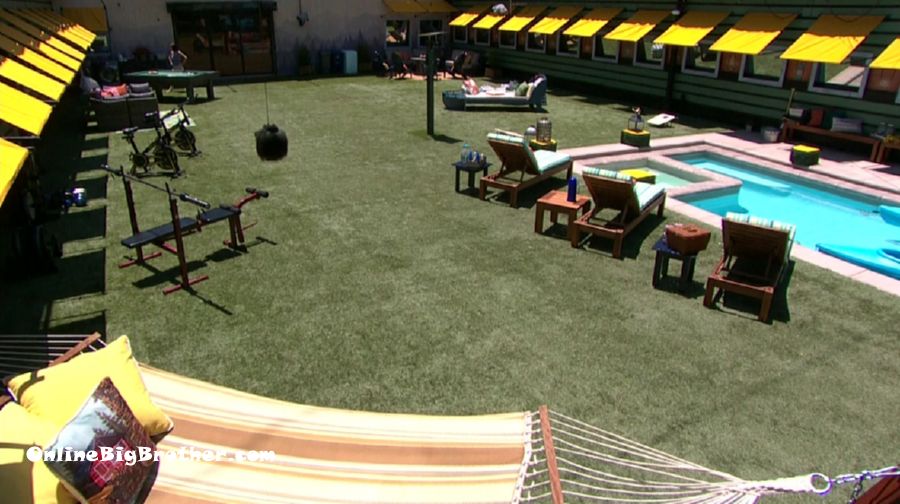 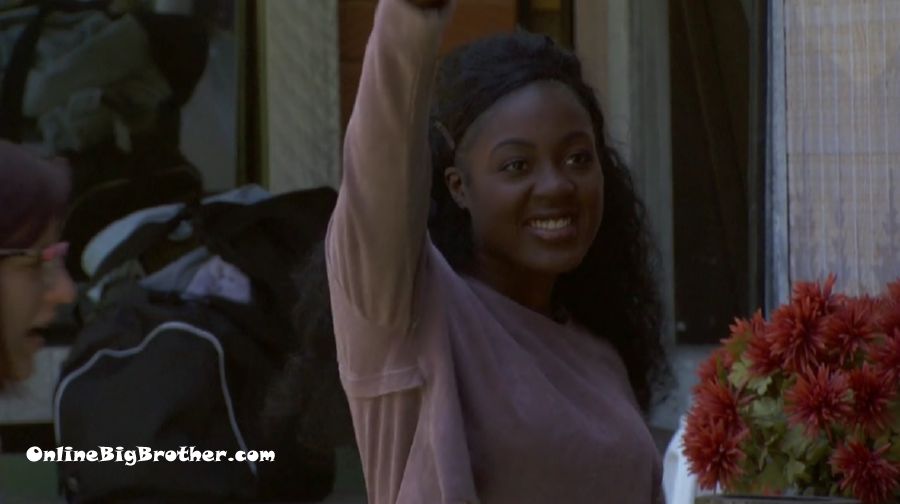 12:32 pm Nicole and Kemi
Kemi – I hope Sam doesn’t do anything with the Veto. I feel like I’m getting backdoored.
Nicole doesn’t think Sam will. 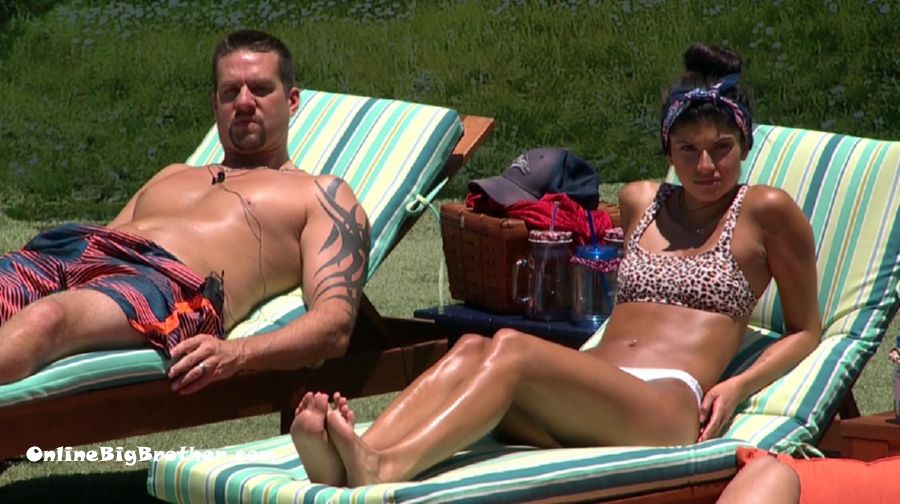 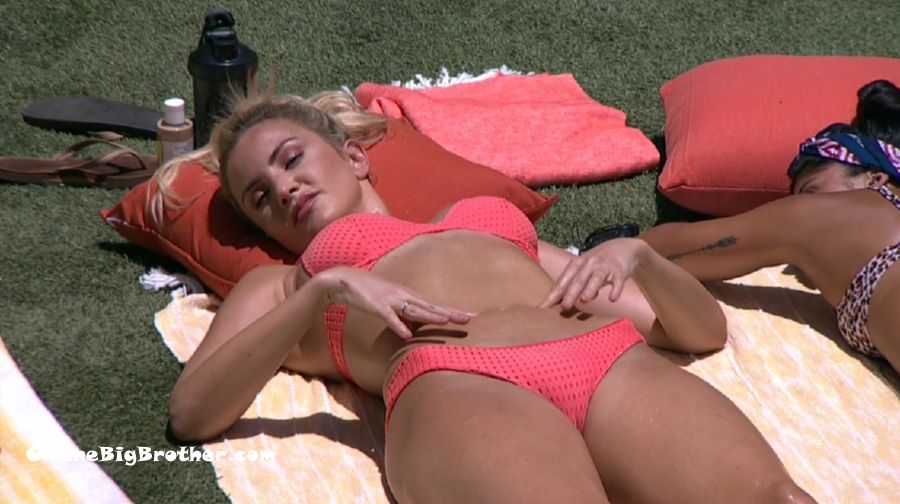 Good time to grab your feeds at https://t.co/qvJ4hTcYz2 #BB21 pic.twitter.com/WTPnQVWsqE

Will someone please tell Sam to quit the yelling!!! lol

I like Kemi and wish she wasn’t the target. She’s adorable, and I believe she really has already sensed what’s going to happen. It will be interesting to see how she handles being put on the block. Backdoors are harsh since there truly is no way to save yourself comp wise.

Even if the *Whackativity prize was a power to save an HG, I don’t see anyone in the house using it on Kemi.

*And what are these whacktivities? Basketweaving? Tug of war? Pet rocks? As long as it’s not “friendship” bracelets, I’ll be good.

wonder who they will go after once they get out all the brown people?

Seriously, it’s so predictable at this point

A fair amount of the house is speculating that the Power of Veto Ceremony is today. Nobody seems to have anything other than a hunch to back this up though.
Has anyone heard different?

this is the same bunch who thought eviction was sunday. for no reason. i’m going with tomorrow if it’s not on the living room screen.

This cast is low-key a bunch of biggots. first the colored folk, then the gays, then the old guy.

I just watched Kemi on the feeds and…she reminds me a lot of Kandi in terms of temperament. I don’t know why so many fans have a big problem with her! I wonder what I could be! Lol

I think it started with her preseason interview and her mentioning that she’s not a nice person. Her reasoning for not talking to Jackson after he became camp director was foolish. She basically said he hadn’t done anything for her so she’s not going to do anything for him. He’s the one with the power you can’t expect him to come to you. This turned me off although I hadn’t seen anything regarding her interactions with the rest of the house that would be problematic. I don’t see her on After Dark too much but I have it on while I’m doing other things so she may roam and I just miss her.

That’s my thought as well. After seeing her intro tape I was like, BB went and did it again, cast another black female to be the “ABW”. We see where this is going. Though I think Kemi is more sassy than angry, it appeared at first she is the type to get singled out early. It’s like they go out of their way to type cast people for this kind of drama.

There are definitely biases, but I don’t think they are all wrapped up in a little racial bow the way some may see it. Just like it was clear that Jess and Cliff had an uphill battle walking into the house. Maybe instead of casting an older chubby white guy, they cast a fit black male as the older contestant. I think the whole dynamic would be different.

Either way it seems to always be the same. Half the house is the good looking, popular type people and the other half is diverse and has to rely more heavily on personality and social skills. It’s the whole birds of a feather thing.

I can see how some see race, I just think it’s more shallow than that.