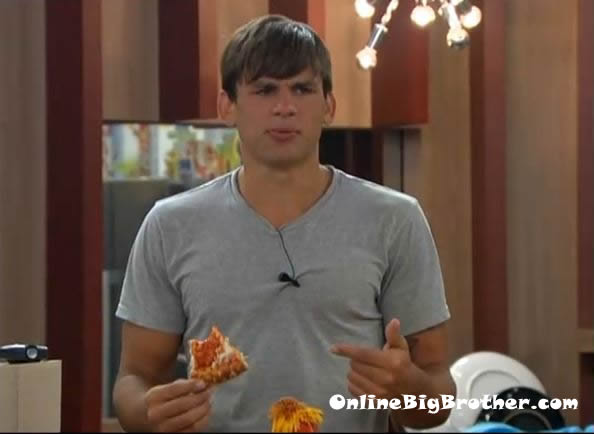 2:15am Gina says she wants to be on the TV show Dancing With The Stars. She tells Jeremy and Kaitlin about how Brendon and Rachel were on the Amazing Race after Big Brother. She says that they didn’t make it very far though. In the kitchen Helen, Jeremy, Kaitlin, Spencer, Andy and Nick are all talking and eating pizza. Out in the backyard – Judd, Howard, McCrae. Elissa, Amanda on backyard couches talking about sleeping on the havenot airplane seats. Elissa wonders which day they will be off of HaveNots. Amanda is talking to Elissa and tells her that after the veto ceremony she needs to come clean about being Rachel’s sister to the people that are saving her. 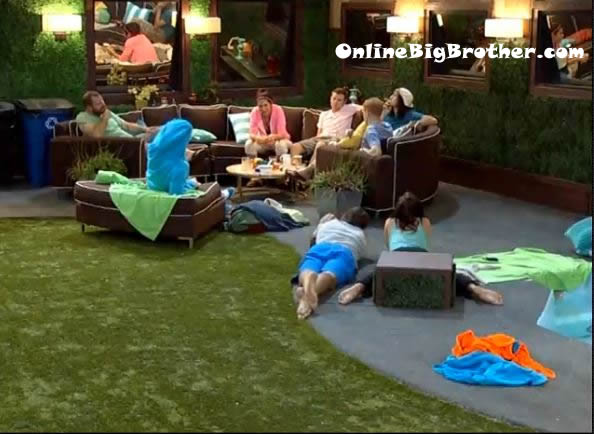 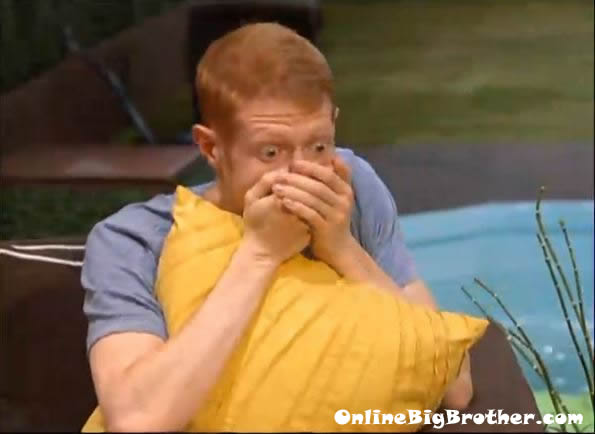 3am Out by the hot tub – Kaitlin and Amanda are talking with their feet in the hot tub. They are discussing there being a unanimous vote to evict Elissa. Amanda comments that someone will probably throw a random vote in the mix for drama. Kaitlin laughs and says that by a vote of 11-1 then Elissa walks up and talk ends. Judd, Amanda, Spencer, Nick, McCrae and Nick are all in the backyard – talking about random things like movies. Andy talks about a shock movie he had to watch for a university class that was all about shocking things. He says that at the end showed a 300 pound tranny walk up to a dog that just took a sh*t and picked it up and ate it. He says he was watching it in the library and a little Asian girl came up to ask them to be quiet and saw that and ran away.

Even MORE from the BB House! Check out the Live Feeds with a 48hr free trail! Access to EVERYTHING they can’t show on TV…we don’t want you to miss a moment this season! 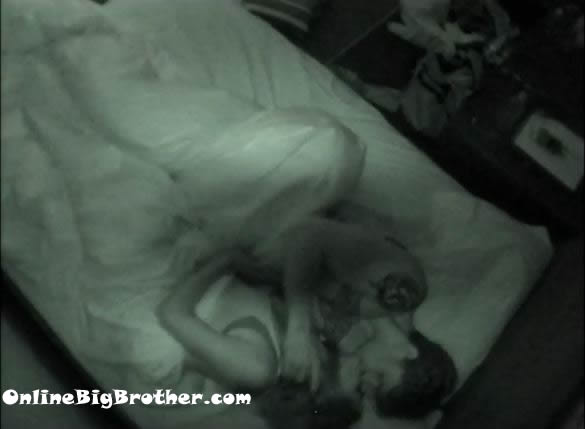 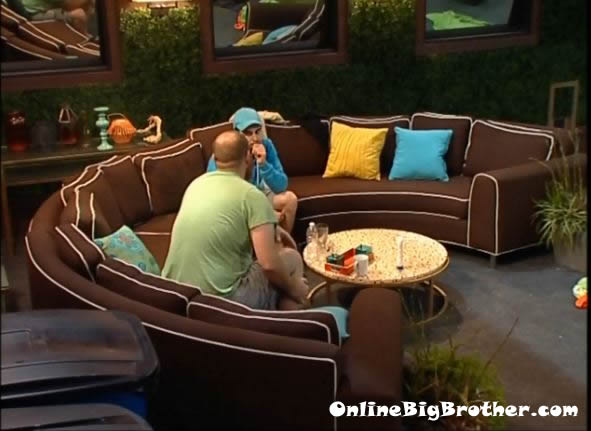 4:40am – 5:40am Nick and Spencer are still out in the backyard sitting on the couch talking. Nick tells Spencer everything about himself that no one else knows. Spencer is questioning what Nick isn’t telling the others and wonders if Nick is a Doctor. Nick tells Spencer that he was in pre-med at Columbia but dropped out. I was a wrestler which is why I used to cut weight and I am a pro-roller bladder. Spencer tells Nick that he didn’t hid anything coming into the house. He says that the only thing is that I own two houses but they aren’t even worth 70G’s. Spencer says I will protect you at all costs. If your name comes up for any reason I will protect you. Spencer says when I came in here I wanted to remind people of someone they know, be likeable, get in good with the girls, and start a hard core alliance within the first 48 hours. Nick brings up how David is already in a showmance. Nick tells Spencer about how Jessie already tried to suck him into a showmance. Nick says but I denied her. Spencer says good, because she is poison. She is like a spoiled little rich girl, just like Candice. Spencer says that Candice complained about how she was helped out during hurricane Katrina saying that now they are wanting her to pay back the 20g’s. He says that Candice talks about going back and forth to New York with her boyfriend. Spencer says pay your debts. Nick talks about getting in good with David to also get in good with the girls. Spencer and Nick both agree that they trust each other more than anyone else in the house. They discuss Elissa being the MVP. Nick asks if we know Elissa is the MVP why aren’t we keeping her around because we know where the nomination is coming from. Spencer agrees. Spencer talks about wanting to get rid of Amanda soon. Spencer brings up how Amanda sleeps up with McCrae. Where is she going to sleep when he isn’t the HOH? Nick didn’t know Amanda has been up there the last few nights. Spencer says that he doesn’t know what McCrae is thinking – probably that he is excited to just sleep in the bed with a big t!tty bit*h. Spencer talks about Jeremy walking around like he is prom king. Nick says that he is left the girls in limbo like that he could be ready for a relationship so that they continue to try and like me. Spencer brings up the moving company alliance and says it will be the most solid alliance in the history of big brother. Nick and Spencer come up with the signs they can use to say they are good or if they need to talk. Nick says if I do an eye rub then everything is good. If I need to talk in the next hour we can ask if you need a coffee. Spencer says well I don’t ever drink coffee so I will never say yes, so let’s just ask if you need a drink. Nick says that he feels like McCrae is the only person who gets his jokes. They talk about how they like talking to McCrae. Nick says that he is there to play the game and isn’t wasting time with a showmance. Spencer says you can’t find love on reality show. Spencer and Nick talk about how they need to get Jeremy focused and to get his mind back in the game. Spencer and Nick agree that they had a great talk and Spencer heads inside to sleep for a bit and so they don’t get caught talking. Nick hangs out on the couch for a bit by himself. 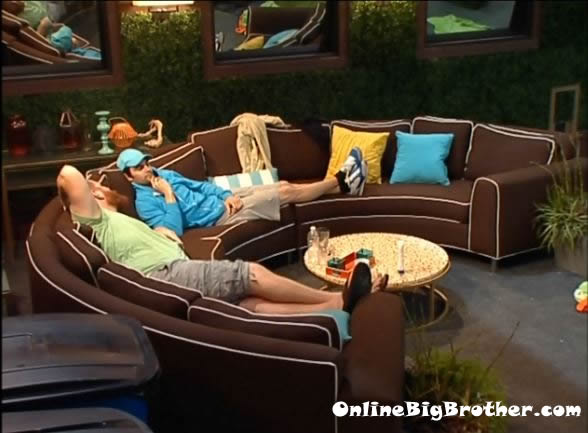 6:20am All the house guests are sleeping.. 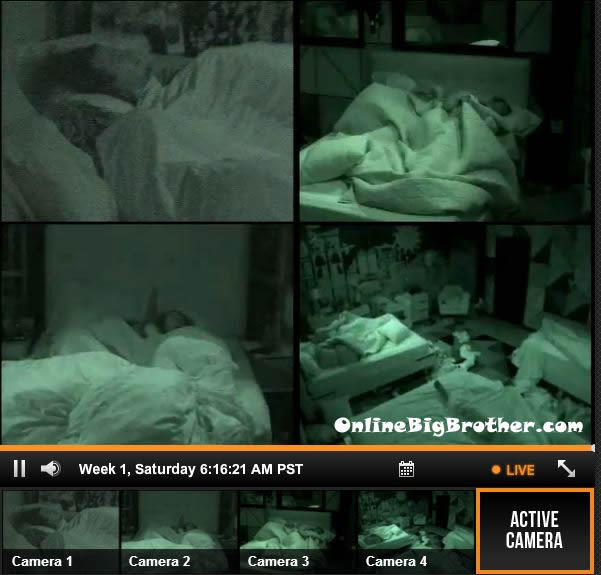 can anyone confirm the rules regarding replacement noms if veto is used?

if these are the rules, how were these exact rules confirmed by the producers?

lastly how are the 2 extra veto players picked? there is the hoh and 3 noms that play in the veto…but which 2 of those 4 draw a player out of the bag for a total of 6 veto players? is the mvp not assured of a spot in the veto?

I’m confused too. I also thought that the MVP was not allowed to reveal their identity, under any circumstance.

hopefully if enough people make comment to cbs production they might make a change? im not sure if there is any chance of the show switching to showtime2 or another channel that allows swearing, or keep it on tvgn but change the rating to allow swearing?

why would they put such a show that features alot of swearing on a channel of that type and give it a 14 rating so swearing has to be censored? for a show that airs after midnight it seems utterly ridiculous to have audio censoring which is so frequent and heavy to the point it ruins the show, often words that arent swear words also get muted so that the flow of a conversation is lost

im watching the uk bb as well right now and they do not censor any swearing even on their main show, and even their eviction shows at 9pm, where in the first eviction there was a girl who was swearing her head off live during her eviction interview

why is american tv so strict on swearing? particularly a cable channel 12-2 am? is swearing in movies on tv also censored with audio being muted? wtf?

I know, I noticed for the 1st time lastnight, girl in the HOH room, I think it was Jessie, was swearing up a storm, and it was cutting out a lot,

Whoever decided to switch from Showtime2 should be fired,unless showtime didn’t want BB which I doubt.

Also , the idea that there will be huge blowups in the house and they will be censored, pisses me off.
People put in a petition to get BBAD back on Show2

In Canada they are showing BB After Dark on Slice (same channel BBCan was shown on) from 4 am – 6 am. Absolutely no censorship on this channel so we get to hear all the convos without bleeps.

ok thanks for the info

thats why we all miss Showtime… nothing was censored either… but now bbad moved to lame tvgn..

So, is Jeremy voting David out? I remember McCrae told him about the plan but they both seem clueless to me.

That was a seriously good conversation between Spencer and Nick. Worth watching if you have the feeds and flashback. Seems like they have it all planned out together.

What is the term Blowmance for? Please help – I missed a few things here and there. Thanks.

I like how the Moving Company only meet up in pairs, and never together, that’s where they are different from the Brigade. Plus, they have more personality than the Brigade. Since the Brigade, houseguests are trained to spot possible Brigade type alliances, it’s smart gameplay by the MC to never meet all at once. The big concern is Jeremy, he is closer to David, Kaitlin, and Aaryn than he is to the MC members. I have a hard time believing that he would go along with the MC if they told him they were trying to boot Kaitlin, he claims he would be ok, but I’m not buying it for a second. The MC need to cut him loose in the next few weeks.

Jeremy and Kaitlin are so cute together.. could be the next jeff and jorden or brendo and rachel..

bb15 couples this year are so natural not forced like shane and Danielle last year.. it was so unnatural to see them tog.

Am I the only one who really likes Nick and Spencer working together?

Gigi was wrong when she said that Rachel and Brenden didn’t make it far on the Amazing Race. They made it to the final episode as part of the final 3. Idiot..