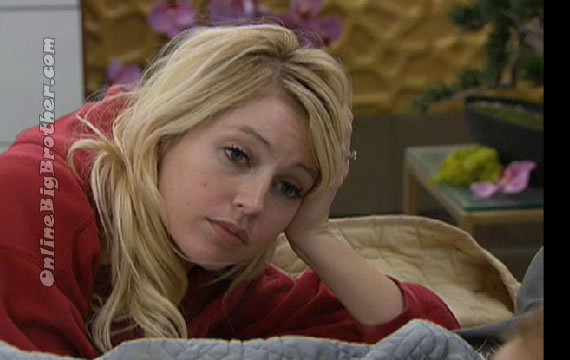 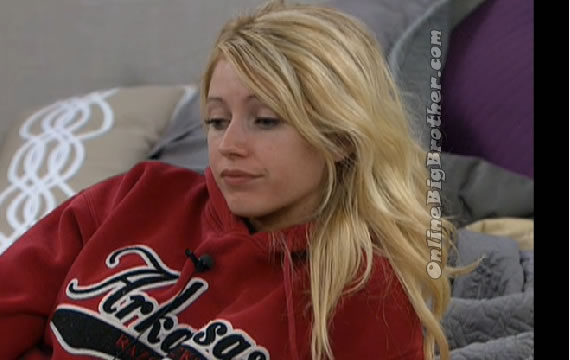 10:55pm Cam 3-4 HOH Ian, Britney and Frank Britney talks about how she wanted to get Frank but picked Shane, She was surprised that no on picked Willie on the second round. picked Britney is wondering why Willie had left and screwed the team, Britney: “maybe he thought he if he left there would be no eviction” Frank thinks Willie just didn’t want to accept that he got evicted. Ian starts talking about the head butts. It’s confirmed that Willie head butted Joe at least once. Britney mentions how much easier everything is now that Willie is gone.
Frank: “I hate seeing people go like that.. being a fan of the show.. but dude.. throwing pork rinds at girls cussing”
Ian: “Least dignified exit in Big Brother History”

Britney and Ian both think that Danielle acts like a kindergarten teacher. At first they thought she wasn’t because she would rattle off these random facts medical facts. They knew she wasn’t a Doctor. Ian brings up all the stories she’s been telling lately “She not pulling these thing out of their.. I’m sure she’s a kindergarten teacher” Britney mentions how the entire house thinks Frank has a different occupation he’s not employed. Frank says he owns a house and has 2 roommates that pay rent I guess I’m a landlord. Frank: “what do you all think I am” Britney: ” A neurosurgeon”

Jenn and Boogie join them in the HOH room. Talk is about the coaches picks during the beginning of the game. They are kind of surprised by Dan’s pick.
Ian: “When I found out the first competition was physical I just about SHAT my drawers” (lol)

Britney: “Big Brother can’t go off without a Big Brother hookup.. our options are running thin”
Boogie: “Ashley and Him”(Ian)
Britney: “If we can get her those muscle relaxants”
Boogie: “A First virginity lost on Big Brother”
Boogie tells him he would win 25K if he lost his virginity for sure. 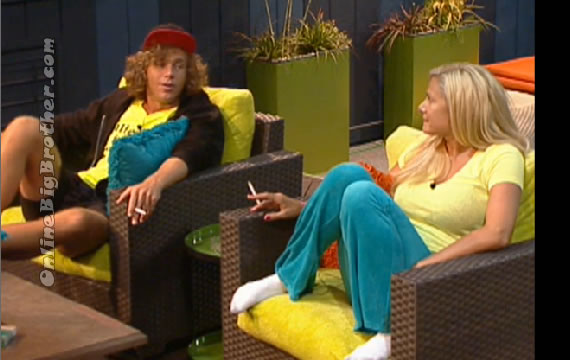 11:37pm cam 3-4 Backyard Couch Janelle and Frank They start talking about how set everything is for them.. AShley joins them and the Brintey/Willie bashing starts. Janelle bitching about Britney being mad at her, “she’ll do ANYTHING to get Shane and JoJO off the block”. Frank says that Britney was up in the HOH talking about how she wanted to pick Frank but got Shane, Ian thinks it’s a bunch of bullshit… 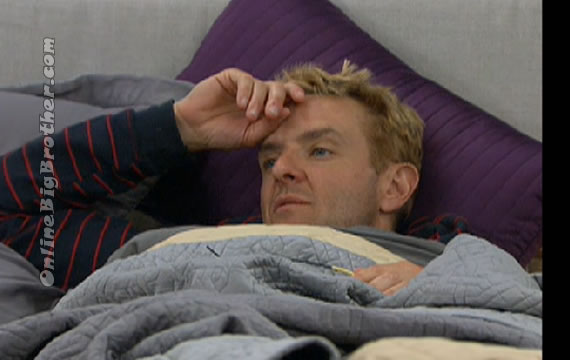 11:43pm cam 1-2 HOH Room Britney and Boogie Talk is about getting dropped back into the game. Boogie isn’t sure because if he has 3 going into final 7 he’s got a real good chance of winning the 100K but if he gets dropped into the house with all these people he’s got a smaller chance. Britney just doesn’t see there being enough players to finish the season.
Britney says that after this week she’s down to 1 player and dan is down to 1 player, it’ll be super easy for Boogie and Janelle to wipe them out one by one. Boogie: “There is a possibility that you could save 2 players.. personally just to be honest with you I came up with an Idea and people got scared and freaked out about it just because they couldn’t see it for what it is”
Boogie: “I wanted to nominate Ian and Danielle and back door Shane or send Danielle home”
Boogie says if they get dropped into the game he would like Dan out of the game because he’s so freaking dangerous.
boogie asks her what she was going to do if she won the challenge today? Use trade in for Wil, “I wasn’t worried about my players I didn’t think you gave thought to Ian or Jen”
Britney was going to use it to save Shane.
Britney and Boogie agree that Shane isn’t too intelligent, He’s a great physical threat but to call him the best competitor in the house is a stretch. 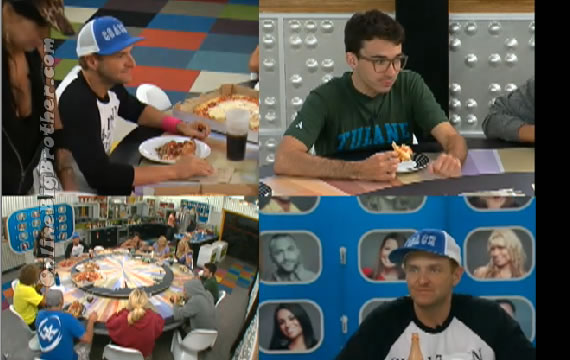 12-12-45AM Random conversations General hate towards Willie, JOJO and Brintey. Janelle, Wil and Joe producing most of the hate. They are told by production to stop speculating about Willie having a drug and alcohol problem. Joe is trying to push heat onto Danielle and Jenn sayign that he’s heard rumors that they are not who they say they are. Janelle absolutely hates Willie and is pretty pissed at Britney. Wil talks decent smack about Jojo.

I wonder if they’re going to have a double eviction this season since Willie is gone. I’m really going to miss all of the drama that Willie brings in the house.

I’m going to miss Willie too. I don’t agree with all of his actions (I mean, definitely not his actions of today), but I don’t think he’s quite as bad as everyone is making him out to be. Then again, I wasn’t locked up in a house with him. 😉 It’s definitely going to be less exciting with him gone. I was hoping he’d win…but, now that he’s gone I have to cheer for Ian. He’s just so sweet and “adorkable.” Plus, I like underdogs.

I’m hoping we get to see something of the fight this Sunday…just so I can maybe get a bit more insight into why Willie did what he did. I think he’s got a good heart, but could definitely benefit from some anger management classes.

So, after this week Brit and Dan will both be down to 1 player. Who do you think will be the first coach out? I’m thinking Dan b/c everyone is so afraid of him and his “mystical mind powers.” Lol

this looks so good on AG. Guess she’ll be using the “production has the option to alter the game at anytime claus”. Bringing back these “coaches” has back fired on her and now they have to scramble and come up with something to try and save this season so early in the game. Maybe now AG will learn bringing back old guest and people living off other peoples name is not a good idea.

Please if someone can explain to me how Brittney is one of the best players ever to play the game tht would be great. To hear her speak like the house guest her puppets and do whatever they tell them to do makes me laugh coming from the person that was rail roaded the hardest and ws to ignorant to see Lane was just stringing her all season.

Anyways, I hope AG goes down in flames this season and teaches her a valuable lesson. BB it not what it use to be. Thanks for your work Simon. I’d sooner read your work here then give AG any kind of ratings.

Grimace122
Reply to  Not A PH D Student

Of you don’t like BB anymore then go watch the rip off show on that other network! I’m sure it is so much better!

Not A PH D Student
Reply to  Grimace122

This show is not BB anymore. AG has messed up what was good show. Bringing back old house guest, letting people have safety for 4 weeks, letting people BACK into the game after they were voted out. Altering competitions to try and keep certain players in the game. This is not the way it was in the past, when the game was much better to watch.

Chloe
Reply to  Not A PH D Student

Total agreement. She is running a great show into the ground.

More power to straightshooter Joe, yo!

I wonder when the house will realize its Joe causing all the drama! He’s playing a good social game, if he is making up lies about people that could ruin that person then he needs to go see a doctor stat!

CBS Production should bring back Kara back & coaches entering this game.

I work one day and i miss all the goodies, guess im going to have to take the rest of the summer off. Too all the Willie haters he really was the least insane of the Hantz brothers. He didnt go about certain things the right way sometimes but his intention were good. He sacrificed himself thinking he could save JoJo n Shane, but production doesn’t want players to control the game regardless of the ratings. As far as headbutting Joe i sincerely believe he deserved it, should’ve gotten a few more shots in if you ask me. Sidenote, the day Joe gets evicted should honestly be a holiday.

Ian n Ash a showmance, please she is a golddigger and she figures Ian is most likely to make something of himself, SHOW ME THE MONEY, she is so snaky, oh i mean sneaky, oh well same thing that i could see her winning this game. Would love to hear her speech as to why she deserves to win, hoping it loosy goosy. lol

I like Wil, but he has to stop being such a bi***… He REALLY doesn’t like JoJo and all he ever does is talk crap about her, not a very classy person… Poor team Britney, they got screwed over hardcore.. GO TEAM NOT BOOGIE

I’m kinda sad to see Willie go! He provided alot of the drama too! and it’s funny watching janelle, joe, and wil acting all high and mighty acting like they have this game won. They’ll get theres. They always do

janelle and boogie’s teams should remember what happened when britney’s team got power hungry,

Joe definitely likes to stir the pot. I can’t stand him! He needs to go! I wonder how long it’s going to take for all the other HGs to figure him out! I like Dan and I’d lik to see him stay a little bit longer in the game. I dont like Mike, Frank or Wil-they need to go too!

I don’t mind Joe so much. You need a pot stirrer in a game like this.
Glad I got my grade 10
Ricky

What started the fight? Was anyone actually “HIT”? do you think it was planned?
I fell asleep and woke up to bits and pieces at 1:00am EST of willis and a fight and he’s no where to be seen? does anyone know where a blow by blow is of the fight and who was involved?