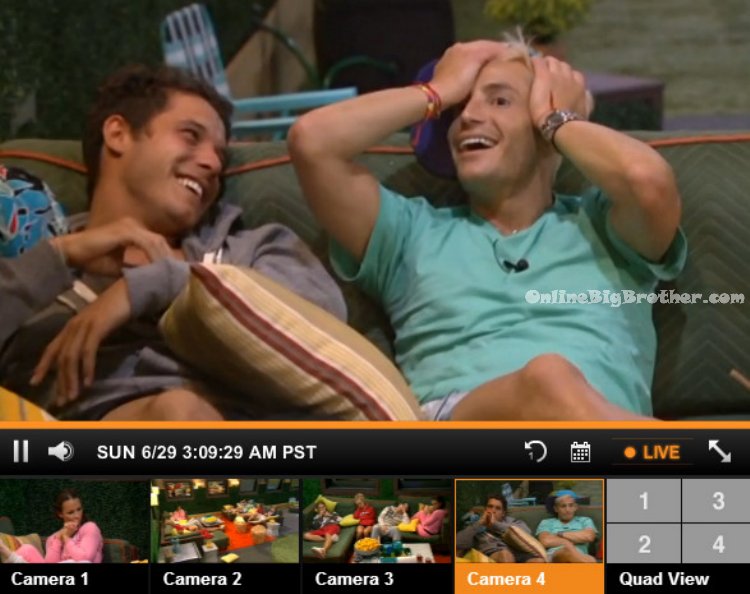 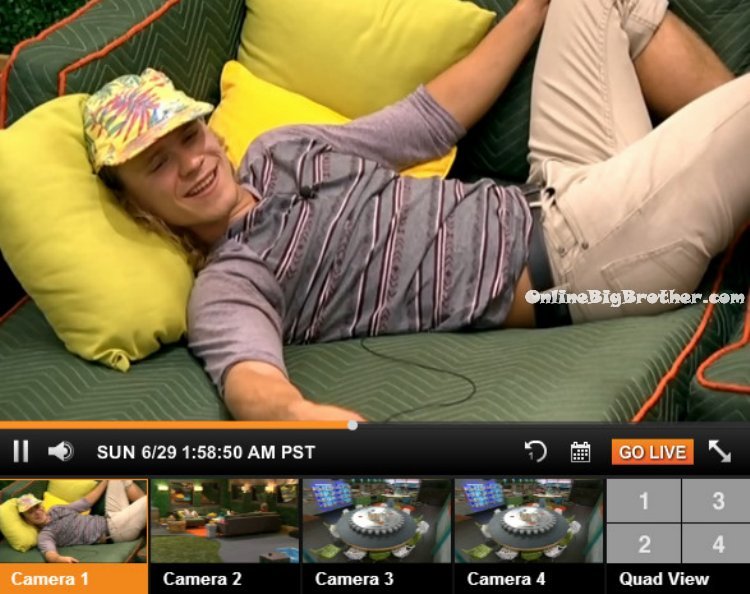 1:40am Christine, Cody and Frankie are laying in the hammock talking about music and other random things. Caleb joins them. They are talk about Joey going home this week. Meanwhile over on the backyard couch – Hayden, Nicole and Zach are talking and laughing. Zach tells them about the college parties he would go to. They talk about Big Brother 15 and Nicole brings up how she felt bad for Ian Terry when Ashley and Frank went out on a date. They talk about how blunt Frank was when he asked Ashley if she wanted to go make out during their date. They are all laughing about how Frank asked Ashley to makeout and then they were making out. Hayden then asks Nicole if she wants to make out. Nicole says No! Stop asking!! Zach asks Nicole what she does with her friends if she doesn’t party. Nicole says we do what we do! We watch movies and get Wendy’s. Brittany and Frankie join them. Hayden talks about how there’s an episode on tomorrow night. They say it will show the nominations and then the Battle of the Block competition. Brittany comments on how people online type everything they do. Zach is really surprised. “Wow, really!” Brittany and Hayden head inside. Christine joins Zach. Zach tells Christine – we’re going to cruise to the jury. Zach says all I have to do is keep sleeping and you keep laughing. We’re in a great position. We don’t need to do anything but follow what the alliance wants. Just be loyal and vote how they want.

3am Out on the backyard couch the house guests are hanging out asking each other questions. (Caleb, Frankie, Cody, Christine, Derrick, Brittany, Hayden and Nicole.) They’re sharing their craziest stories. Caleb tells them about killing a wild hog with a stick. He says that it was trying to kill him. Caleb looks at the camera and tells people to check out the video on youtube (Caleb’s family deleted the video due to all the pre-season controversy about him. TMZ also interviewed his family.) The conversation turns to talking about other random things. They name off the Teenage Ninja Mutant Turtles. Frankie knows all the names and their weapons. Derrick asks them what the best christmas gift they’ve ever gotten was. Caleb says a week snowboarding trip when he was 15. Brittany says the gifts she receives from her kids. Frankie says his sister gave him sparkly Uggs. Brittany starts telling a story of when she ran out of gas in the desert. Derrick asks her what type of car she has? Brittany says a BMW 5 series. Cody says a BMW 3 series. Caleb says a truck. He says he bought a car but sold it soon after because it just wasn’t him. Frankie says the A Train is his transportation. 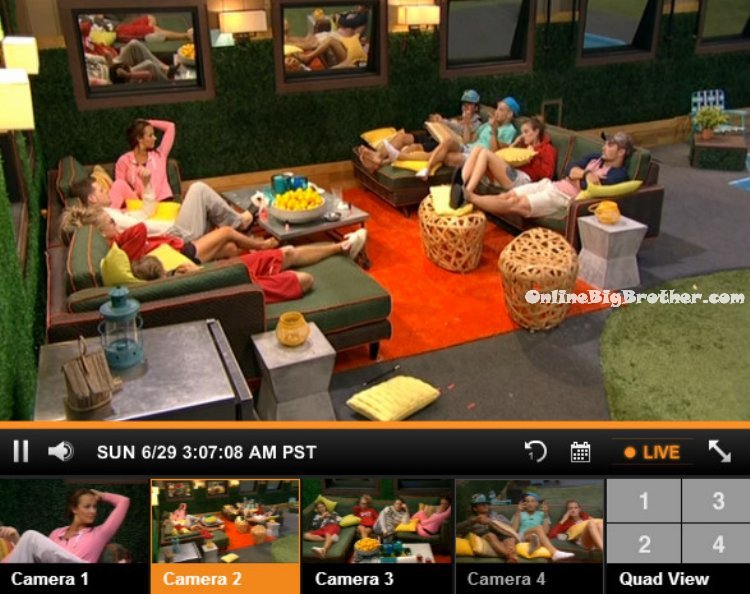 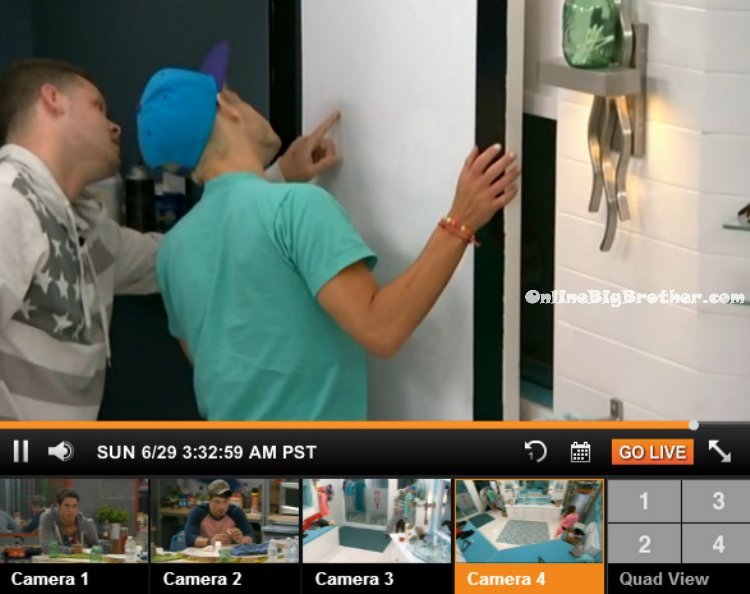 Frankie heads to the bathroom and tells Brittany . Brittany says that it was hard to talk to Devin because it reminded her of her ex when she could get words out edgewise. Frankie tells her that it was good, she needed to protect her game. Frankie says when the time is right (Frankie motions that Devin is gone.) He says not this week but.. Frankie says next week is a whole new game and everything changes with a new HOH. Frankie tells Brittany that he loves and admires her. I love you. I want you here! Everything changes next week. 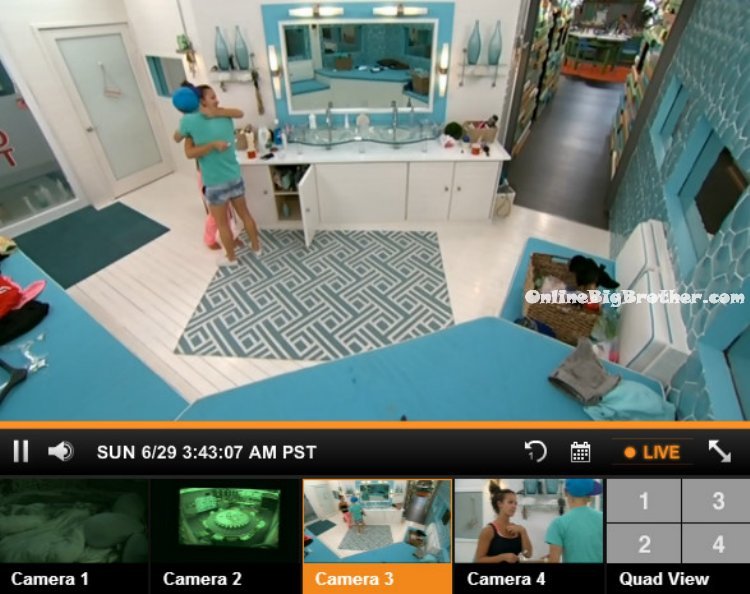 4am – 5am Brittany, Frankie, Joey and Cody are the last house guests awake and in the kitchen. Frankie heads to the HOH room to go to bed. Brittany talks to them about how Devin made her feel. She says it made me feel like my ex where he would make me feel so dumb and “retarded”. Cody tells Brittany to stop saying that word. Joey tells them the bump on her lip isn’t herpes its a zit. Joey goes to the washroom. Brittany talks about not watching big brother before all this. She says when she knew she was on it she crammed until 5am every morning watching it. Cody starts asking her kids and life outside the house. Joey comes back and her and Brittany decide to make coffee. Cody says he’s going to go lay down. 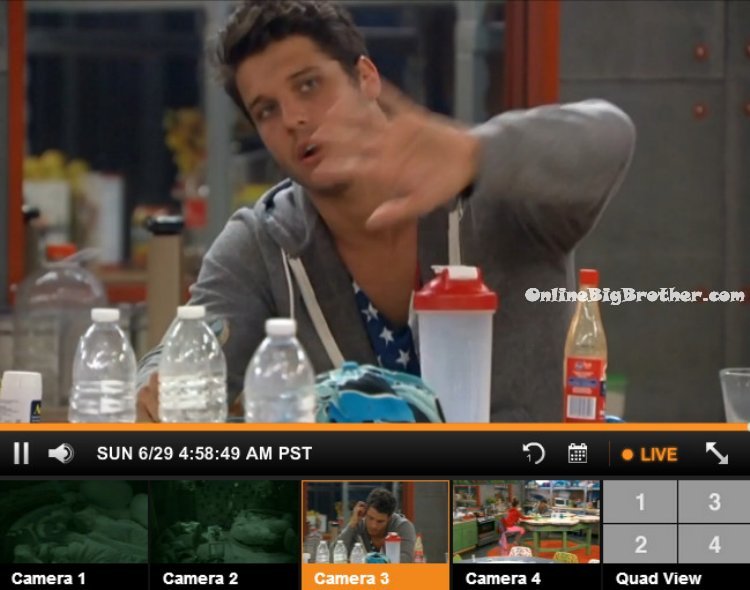 Devin says next week he’ll win HOH and put up Brittney and then she’s gone. But Brittney has already been a nom and won the BotB so if he puts her up she may win again and then he’s no longer HOH. Doesn’t he realize this?

Next week Britanny needs to win 1st HOH and put Devin and Frankie, then Paola wins 2nd HOH and puts up Caleb and Zach.

Caleb and Zach wins the compettion and are safe,
Britanny wins the Veto.

As soon as one of the guys gets up on the block they will go crazy and crack….

Did you just say pow pow wins hoh? Good one

I hope next week Jocasta & Victoria get involved they have done nothing but lay around.

Frankie and Zach remind me of Night at the Roxbury. What is love?

Devin is going to melt down soon and I sense that under the surface Caleb has a lot of anger going on. Either one of them with their backs against the wall could go Willie Hantz at the drop of a hat. I thought I wouldn’t like Derrick, but so far he is impressing me. It looks like Joey is going home this week, I can’t say I will miss her, but at least she is stirring it up on her way out. If anyone but Caleb was HOH she might be able to convince them to put up Devin, but Caleb isn’t going to do it. I really want to see Frankie and Zach eat their words. Don’t they ever watch BB? Anyone who thinks they have the game won this early in the game is destined to go home. Didn’t Andrew and Kenny think that week one? And Nick last year? At least the cast is light years more mature than last year. I know its only week 1, but it is starting to feel like happy friends backyard party. They all get along too well, Devin is the only person causing friction. I’m sure that will change, but it was pretty boring yesterday watching them all get along.

As soon as Devin gets up on the block, he will explode an screw his own game. Will be nice to see that.

I do hope Frankie get all the help from his famous Sister and will be voted for American`s alliance, he is alreday really cock, and if he wins he will get even more full of himself and will start screwing up his game.

This season BB Canada. It was a good season, stacks up with the best of BBUS. Great twists and great cast.

BB Canada, Kenny and Andrew made an alliance week on, Andrew an alpha male, Kenny gay but playing it straight. They got so cocky and were gone before jury. Kind of interesting parallel with Zack and Frankie.

I think today we’ll see if Caleb and Devin are able to put their anger and arrogance away. The more they show those sides of them the faster the other HGs will want them gone. Unless something crazy happens, I don’t think Joey will be able to survive this week but if she keeps poking the Caleb/Devin bear one of them is going to lose it. And we do like drama.

I’m losing what little respect I might have had for Brittany. She’s playing the poor sweet mom card yet she drives a BMW, has an actor boyfriend that she can’t name, and has never watched BB before. She just wants to be on TV.

Im sick of CBS having people on the show who never even watched an episode before they get cast. Sitting around bragging about their BMW s while real fans who try to get a spot get over looked. And for the record I really really really dislike Zach so by default i feel the same about Frankie Cody and one of my earlier favorites Derrick. Anybody close to Zach is on my hit list. Hate that Kid.