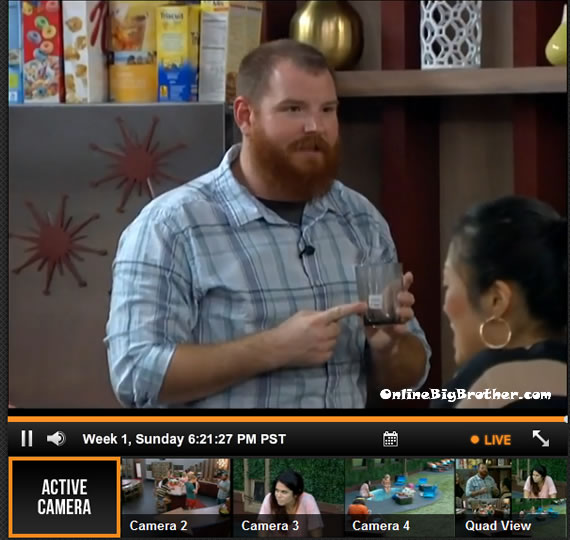 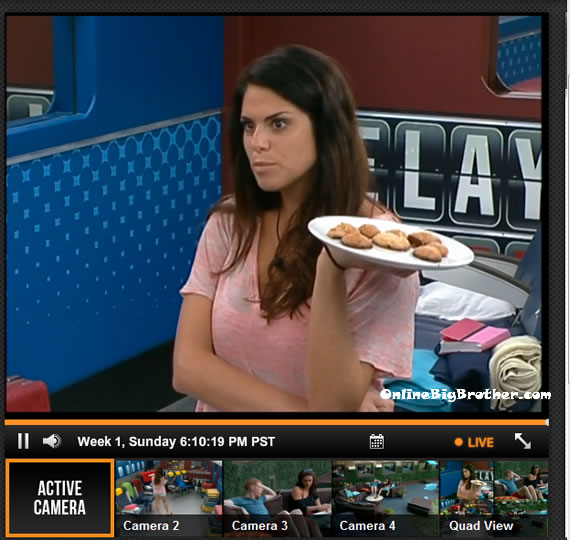 6:10pm CAm 1-2 Howard and Amanda
Amanda delivers Howard some cookies “Apparently this is the best thing I’ve made yet.. it’s hot”

Amanda asks him if he’s had a chance to talk to Candace. .he says no but he talked to “Spence” and “Spence” will handle it, “his plan is to wait for Tuesday or wednesday morning”

Amanda brings up how paranoid Judd has become. She retells the rat story (See previous post) Howard will talk to Judd because he’s seen Judd acting paranoid. Howard: “as long as he has his cigarettes he’ll be OK”

Howard: “Judd snoops a lot but I’m good with him”

Amanda “it’s really a no fail.. running all the scenarios.. the only way it will fail is for them to win MVP, Veto and HOH”

Howard: “It’s too good right now everyone needs to chill”

FYI you can re-watch ever second on the feeds using their flashback feature.. It’s super easy to use Big Brother Live Feeds 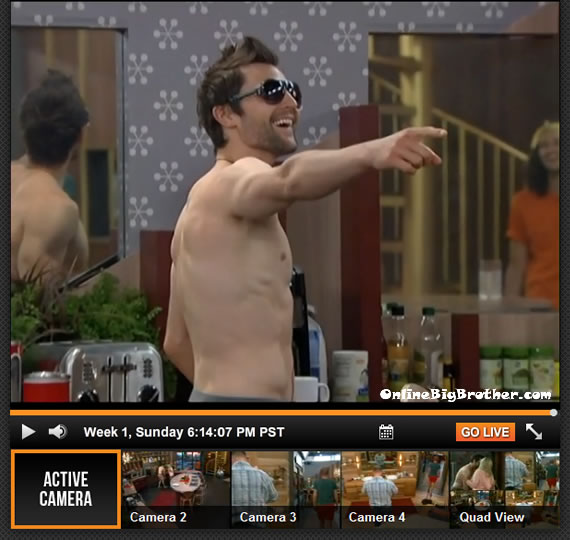 Talking about the Kumite 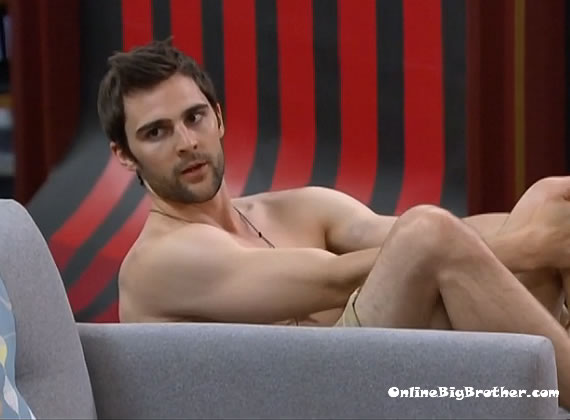 Nick starts to talk about his “List” to make 2013 the best year of his life..
1) Visit South America
2) Be on Big Brother
3) Run a marathon.
They all agree that the Amazing race would be wicked to be on. 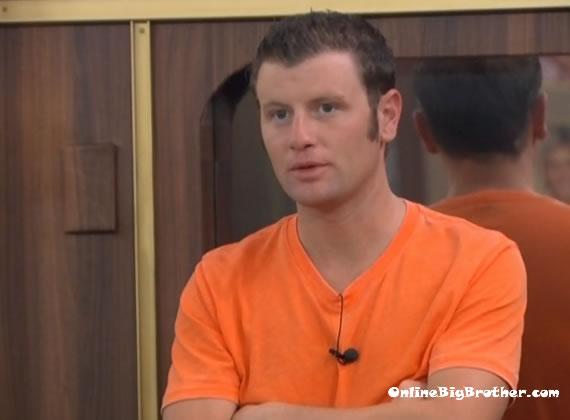 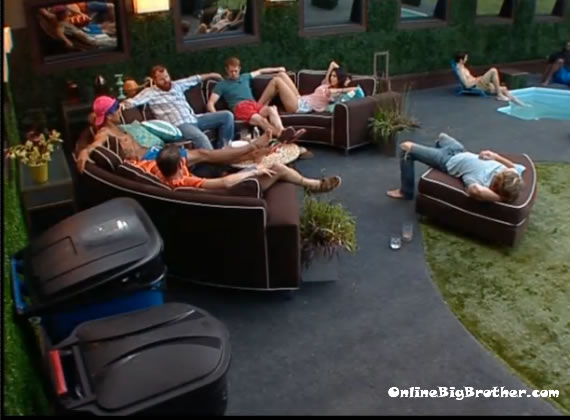 So can anybody break it down for me how the votes for the eviction night stand right now and who is destined for elimination.

How much do these people use racial slurs?!

Sounds like the DR finally told them to cool it on the racial stuff. BB15 was trending on twitter the last 24 hours, and I think it has to do with the blowback about some of the stuff that was said. Amanda is starting to remind me of Nicole from BB2, a tough alpha female chick. Janelle and Rachel were alphas, but not the Nicole/Amanda type.

Look, Look what nick’s list is 1) Visit South America 2) Be on Big Brother 3) Run a Marathon ok do you know what the problem on this list for me? the 2nd one is say’s Big Brother 1st off the number 1 spot should be Big Brother for the best year’s of his life because come on your living in a house your competing for MONEY and that is VERY IMPORTANT and not only that your living with the contestants that vote on who should be the winner really?? Visting South America is your favorite best year of his life?? for me it would be living in the Big Brother House for the number 1 spot I mean come on that is a DREAM COME TRUE to live there. Visiting South America sounds WAY funner than running for a marathon however Id rather be in the BB house than visting South America and running for a marathon that’s just my opinion. Good luck to some (Not all) contestants.

Who cast this group of desperate whores, misogynists and racists? And then they threw in a brain-dead surfer dude just to round out this pathetic Breakfast Club. I haven’t seen such a sad cast of “characters” since BB9.

Never heard the, “Houseguests, do not make racial slurs…” in all the years I’ve watched, but admittedly I could be wrong on that. Wow. Just wow.

More racist bullshit — from the Mean Girls……… “Ginamarie & Aaryn on Candice. Ginamarie: “”Candice is on the dark side because she already is dark” Aaryn: Be careful what you say in the dark, you might not be able to the b*tch”.

Thread moved to the BB Discussion Forum. Click on link to view/reply.This is a growing list. Some of the flashback times may be off a bit.Aaryn•About Helen: Dude, shut up, go make some rice (6/30 1:14AM)•Andy will get MVP because people love the queers (6/29 11:40PM)•Quick to correct Candice’s pronunciation of “ask” (as opposed to axe) but is fine with GM saying it as axe•Bragged about making Asian eyes in the DRSpencer•Called Helen Kim Jong Un•calls Andy Kermit the fag to his face (6/29 ~4:40pm)•Called women the c-word•Says “Bitch, get your ass cooking” (6/30 ~1:57pm)GinaMarie•Said blacks stick together and that they’re “tokens” in the house (6/30 ~4:18AM)•Candice’s “blackness” is showing now that she’s not on the block (6/30 ~4:20AM)•They should make Helen’s eyes “straight”•Said something about weaves being ghetto and then looked at Candice (6/29)•Helen should kiss their asses and serve them rice (June 29, 2:42pm Cam3)•Told Nick in the lounge that the way Candice talks is fake because she talks too white (6/29)•Said that Candice had that black thing going. intimating that she was getting ghetto (1st night of feeds)•Mocked Candice’s voice in a stereotypical fashionKaitlyn•Said “nigga” but not in a reference to black people but more like “dude” (6/27 3:28AM C3)•says Candice came at her acting aggressive and she was thinking Candice’s black side was coming out (6/27 ~5:47AM)•Said “Gays are untrustworthy in a game like this”Jeremy•Re: Kaitlyn’s vagina: wants to see what he’s working with, called it her meat wallet•Re: Elissa, said he’d cut a bitchAmanda•Calls herself the fag hag queen (6/29 ~5:30PM)

Thanks for that recap. I also should have added homophobic to the list.

Aaryn needs a clue-by-four to the head. She must have no problem at all coming off as racist and homophobic as she must realize that everything she says is being recorded. One can only surmise that she WANTS to be portrayed this way. Unless she truly is just stupid.

WOW!! I think they need a new casting director ! That Aaryn and Gina are disgusting!

They are both pageant queens!!! Gina puts them together and Aaryn was Miss Teen something!!!

OK, am I remembering wrong about something.
Wasn’t it just last year the house was up in arms because Willie Hantz used the term N***A in conversation?
And he was not even using it in a hateful way, he was saying it in reference to someone you think is an Ahole and want to smack down (slang talk, and he was not referencing a black person).
Yeah, it could be taken as hateful I suppose, but when I compare what he said to what THESE people are saying it makes him look a hell of a lot better!

I seem to recall that being HUGE. Why does no one seem to be taking issue in THIS house?
Or is it just that the people speaking this way are assumed to be on their way out anyway, so just let them hang themselves more?

no one is taking it seriously because Aaryn

It shouldn’t be lost in all this that Elissa was the only houseguest that I heard that took offense and spoke out about some of the comments that were said, good for her.

I am curious…Are there any fans of Aaryn, Gina and the Bieber fever crew?