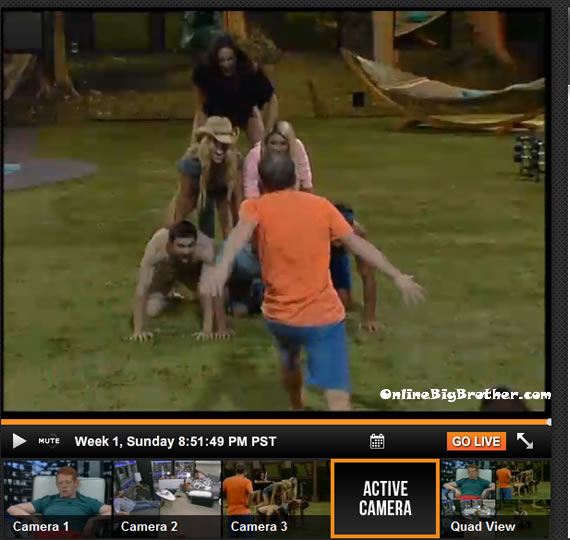 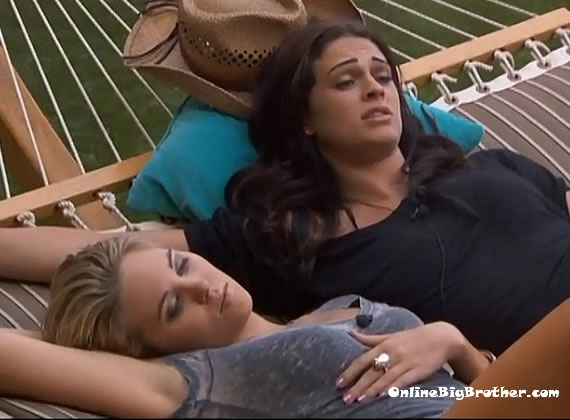 Kaitlin: “Elissa the crazy B!tch cornered me.. dude she never corners me.. she asked me Is Jess hooking up with Jeremy”
Aaryn: “Oh she’s trying to stir up Sh!t”
Kaitlin: “I told her I know that she likes him it’s ok go ahead flirt with him.. she was like WHAT”

Gigi brings up her DR session earlier today. The DR told her someone said she was swinging her microphone around.
GiGi is certain that it’s Helen. Apparently GiGi was swinging it around last night and Helen “Left in the middle of it”
Kaitlin: “She’s a complete nut job”
Aaryn: “complete Nut Job”
They do not trust Andy anymore after the conversation with him in the hammock last night. 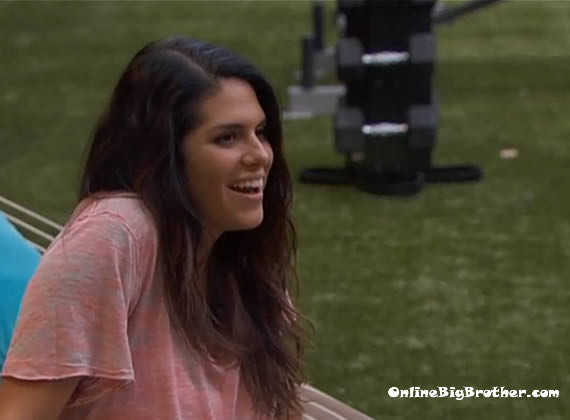 Amanda and Kaitlin Hammock
Kaitlin: “Do you have underwear on?
Amanda: ‘Ya I do my V***** is eating it though”
Kaitlin brings up what Elissa told her about Jessie and Jeremy hooking up. Amanda agrees that she’s just trying to stir up shit.
Amanda asks her if she would be mad if Jessie and Jeremy really did hook up.
Kaitlin :”I really don’t think so “
A: ‘C’mon really! be honest”
K: “YA I’m seriously a different breed than him.. if he would hook up with Jess I would cut him loose.. he has to make that decision.. he’s a big boy.” 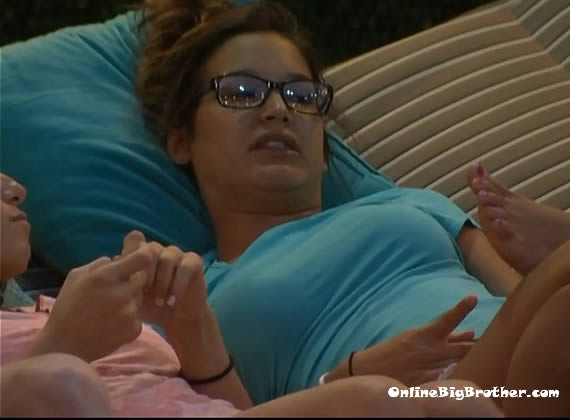 Jessie is talking about the day when her and Jeremy were flirting together and then she found out that night Kaitlin and Jeremy had slept in the same bed. Amanda pours fuel on the fire saying “I can’t believe she flirts with him in front of you”

Jessie explains that Jeremy told her he wasn’t interested in her and wasn’t looking for love on the show.

Jessie: “I still think he’s freaking adorable.. he’s a cutie”
Andy: “I just wish I had a ragan fox in this house”
Andy: ‘I think you are in a really good spot right now”
Jessie: “I just hope the house doesn’t put me up next week”
Amanda: “I don’t see that happening”

Jessie tells them she’s heard Helen is on Aaryn’s sh!t list, “she’s got a short fuse”

Amanda asks Jessie if she is allied with Bieber fever (David, Jeremy, Aryn and KAitlin)
Jessie says no

Jessie: “Nick and GIGI are a pair now.. “
They all agree it’s odd.
Andy: ‘He’s an odd duck for sure”
They all agree they shouldn’t talk game with Nick.
Jessie: “The other thing about NIck is he never does anything without a purpose”
Andy: “Why is he getting called in other DR 5 times more than I do”
Jessie: ‘Sometimes I get the impression that he’s MVP”
Amanda: “I do not feel too safe with him in the house”
They all agree it‘s hard to make a connection with Nick.
Andy: “everyone has shown me a side of their emotion except for him”

Andy: “Everything about him is plain.. what got him here.. everyone else has a story”
They all say “I want him out of here. Jessie adds that Nick is strong so they will have to BD him or use a MVP 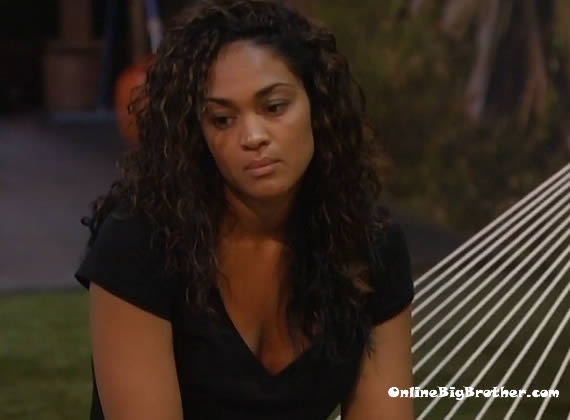 Andy tells her that Helen is not allied with Elissa at all. Jessie says she really likes Howard she thinks it’s like having a personal life coach.
Andy: “one thing people need to get in their heads is friendships and Alliances are two separate things.. I could be talking to Helen as a friend and not making some super alliance”

Andy says he doesn’t talk to Elissa very much, “she has so little to say”
Jessie: “she can barely complete a thought”
Andy: “ya totally ”

Candace joins them.. Andy says they need to work out a system

Andy: “Girl you need to drop that.. seriously”
Candace: “why should I be scared or something.. ”
Andy: “Girl drop it”
Candace: “I guess”
Candace doesn’t understand why someone can mess with her game and she’s suppose to let it go. 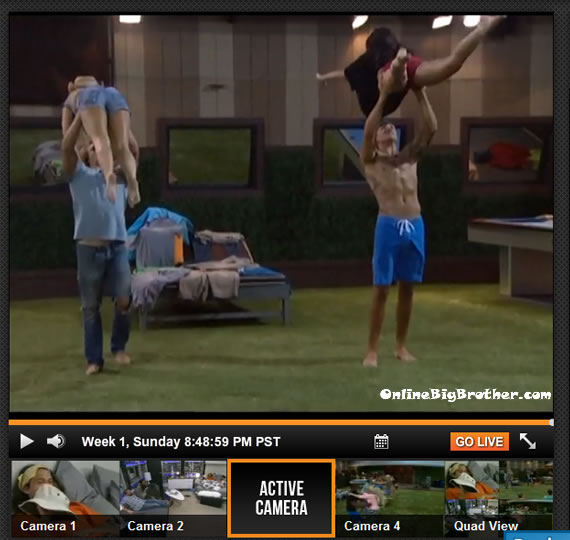 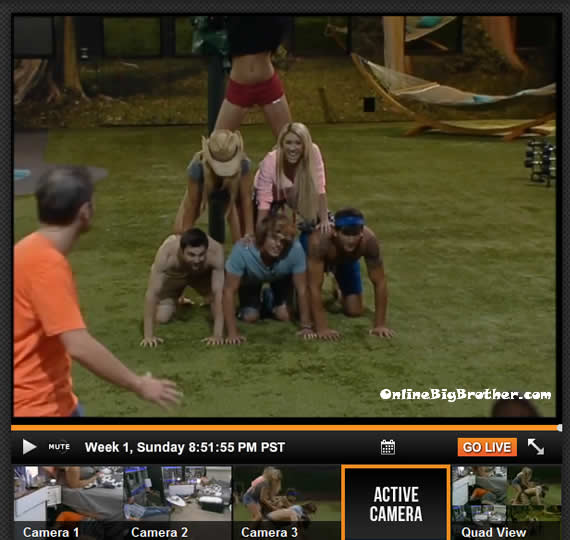 9:03pm Cam 1-2 Beiber fever Backyard
They are commenting on how the entire house is up in the HOH now.. Jeremy: “We’re the only ones that like to have fun”

Uh. Idk, Amanda is growing on me a bit. As for the other girls, these racial slurs are getting really out of hand and there is a difference between discrimination and prejudice. If they have a prejudice against a specific group of people, that is fine as long as they don’t act on it, we are allowed our own thoughts, but only certain things are socially acceptable and when they act on it and say these things out loud, it does nothing for their image other than to bring it down. It needs to stop, it’s rather annoying, I understand they are young, but I know kids that would never say a word like that.

She’s growing on me too. She talks too much, but I’m finding it less and less annoying. It’s Gina, Aaryn, and sadly Kaitlin that are getting on my nerves.

I am starting to like her as well. The other 3 need to go

Glad Amanda is getting more fans! 🙂

Nastiest and most disgusting cast ever! Is anyone affiliated with CBS or BB going to reprimand them at all? I just cannot believe the over racism in the house. Not to mention, those of you in the house who are sitting back laughing at every racist comment, you are just as guilty. I can’t wait for them to get out of the house, and see how disgusted the viewers are with them.

Wow. I’m at a loss as to why anyone, who is not a racist, sexist pig, would give you a thumbs down for that comment. Either the “thumbs downers” have zero to minimal reading comprehension, or they approve of racism, sexism and homophobia. Did I just time travel back to 1962?

It is probably a thumbs down for what the gals are saying.

I accidentally gave it a thumbs down just now trying to see if it showed who was giving a thumbs down…for the record…it doesn’t.

Do these idiot bimbots even realize that they’re on Big Brother? That they are actually competing for money, not penis?

Half the time it seems to me I’m reading recaps of a poorly written mashup of Sex in the City and The Bachelor — if most of the bachelorettes were huge, moronic racists, that is.

Aaryn and Gina Marie were talking about the feeds, and neither one of them knew how they worked.

Certainly neither of these bimbots will be winning any Nobel Laureates in anything, ever, but they must REALIZE they are on a live reality show that has live feeds, unless they went into this completely clueless, which, with those tow, seems all-too probable.

Hopefully it does some good. At this point it’s embarrassing — for them and their families.

These girls are nasty god will never let people like that win this game.

Is it just me or does Macrae look like a croos between Phineas and Weird Al Yankovich? And for the love of god, why bring another Reilly on the show. Hasntthe world been tortured enough already.

I think a majority of us are actually wondering why people care so much. Rachel isn’t in the game with her. Rachel doesn’t have a special vote in place. if anything even with the “MVP” garbage, she will constantly be an outcast and likely voted out

Im not seeing a reason to dislike her though. she made a darn good argument that she is her own person. is aaryn telling us about her brother’s and sister’s who aren’t playing in this current season of BB?

hey simon glad to see your back in your element. Buddy i gotta question about your iphone app. Is that thing still availale for the iphone for bb15 in the canadian app store or has it been terminated.

Hey BB7ftw.. iphone has is dead right now no idea if it will be fixed for this season. I’m going to have to find another developer or do it myself.

the amount of racism in some of these contestants is disgusting. i wish people like candice, howard, helen, andy, and elissa would start a huge fight over it.

Im glad other people are just as mad as I am with this cast! It seriously kills me that people can be so racist/sexist/homophobic. We live in 2013 come on people wake up and love your neighbor!! Ugh how can cbs not show this to maybe open peoples eyes more to such obvious hate?!?! I really hate how aaryn is protraying straight blue eye blonde women because I am one and I do not have any of her beliefs. Equal love for everyone!!!……

Its so hilarious how the MC doesn’t think there will be some kind of twist to throw a monkey wrench in their plans. Smooth sailing my a$$. Cant forget A.G.’srules

If Paula Deen is losing her deals because of her racist views these girls should lose their spot in the house! It’s a form of bullying and it’s not fun to watch! It’s really annoying and I am sure their parents are mortified!

These girls are very racist. They think they are entitled to anything and everything. It sickens me. I want them home sooner than later. They must have sad lives.

Nasty. It makes me not want to watch. How dumb can you be.

Who the heck is thumbing all these comments down? Apparently some feel that derogatory comments are just fine, nothing wrong with that!

Exactly it is sad if people are doing so because they think what these bigots are saying is okay because it is NOT..

these people thumbing down these racist comments have to BE racist BITCHES … AARYN ,GIGI, KATLIN WHAT THESE BITCHES REPRESENT are worst than making shitty remarks feeble minded players,, dependency on men i cant wait for these whores to leave ..I’d rather eat crumbs with the bums than eat steak with these bitches

I thought Amanda had a boyfriend

“A: “McCrae has a kickstand… I’m like damn why do I have a boyfriend””

I absolutely love BB && Aaryn is ruining it for me. She is NOT what a Texas girl is all about! && we should kick her out of BB && Texas! To be so disrespectful and ugly. I really hope people actually get to the the ugly person she really is.

I’ve said it before but I will say It again. I really hope that sponsors of CBS and BB will be back for another season. As its going right now I just don’t know. It is insane to me to think that these girls can be so racist. Julie Chen better lay the smack down on these dumb bitches.