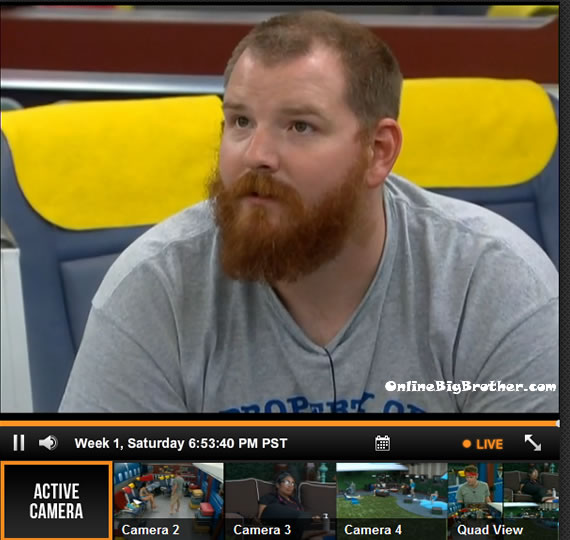 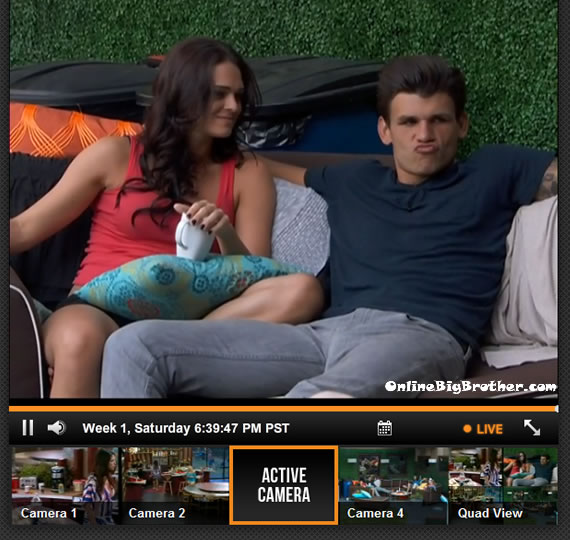 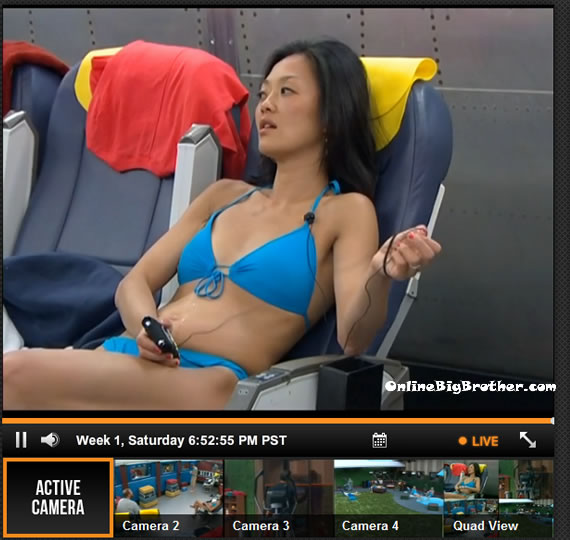 FYI you can re-watch ever second on the feeds using their flashback feature.. It’s super easy to use Big Brother Live Feeds

Helen is asking if Candace would want to work with them for a little while.
Spencer: “OK.. I think a lot of you and I want you in this game.. Elissa she’s expendable and I know you have a little mother connection with her.. with Candace she’s not a bad person she’s sweet girl.. but they are on the outs it’s like toxic waste to us”

Helen: ‘So Elissa stays.. what happens when one of us wins the HOH is Elissa the target?”
Spencer: “No they are the targets.. Elissa is a sacrificial lamb they will target her.. They are going to be pissed off that she is responsible for all this”
Spencer: “She told McCrae that she doesn’t want to make Jury” (Elissa)
Helen says that she cares for Elissa but she understand that in this game she is a huge issue for her.
Spencer : “You don’t want her to F** up your game.. and this is the thing everyone has to go at some point”
Helen: “I hear you”

Helen: “I want to pick off the people that are like I don’t watch this show.. You and me are huge fans.. we left our jobs to come here”
Spencer: “I completely agree with you 100%.. the best thing we can do for the ones we care about is at least get them to jury.. SHe doesn’t want to do that”
Spencer says that once someone else wins the MVP they can cut Eliza loose. Spencer: “The fan base is larger than the Rachel’s fan base.. once the fanbase is voting for one of us that means she doesn’t have the follow anymore.. at that time we cut her loose cause that means the fans are liking what we do”

Spencer: “her status is being weaponized we use her to control one vote.. I think this is good game play we didn’t make the rules we’re just using it to our advantage.. and when the time comes we cut her loose we have the numbers anyways.. it’s the ugly part of the game. ”.
Helen: “It’s going to be crazy when David goes home.. what do we do?”
Spencer: “we all play dumb.. we have the numbers”
Helen: “they will all think I was the vote that kept Elissa”
Specner: “If they come for you we have the numbers for you to stay”
Helen: “I trust you, McCrae, Andy and Howard”
Spencer :”we are not going to lead you astray”
Spencer: “Amanda approaches me and I got you, howard and Andy involved that is where the number come from” (# to keep Elissa)

Spencer: “There will be a plan to BD Jeremey at some point.”
Helen: “thats my plan “
Spencer: “it will be easier and better to cripple him by taking out his alliance.. if he’s playing it alone we all play for Veto and there is no way he’ll win every week”

Spencer: “I want Aaryn out and I tell you why.. she is tailored made to be Amercia’s favorite.. she stands in front of the camera flashes her blue eyes.. blonde hair.. she’s perfect for that I want her gone very quickly in the next two weeks cause you leave her here and she’ll develop a fan base”
Helen: “I think it’s Jeremy then Aaryn.. or Aaryn and Jeremy”
Spencer: “doesn’t matter”
Helen: “What do we do with GIGI”
Spencer: ‘She’s toast the information i’m getting is she’s trying to form an alliance with David, Nick and Jeremy”

Helen: “At some point she might be able to come over.. we could use her.. I don’t know we have the numbers right now”

Spencer: “I don’t trust GIGI for one minute she use to be close to howard at first then once he lost the HOH and POV she’s been talking shit about him.. like he was weak.. it’s a bad personality trait.. she was using him to form a strong man alliance”

Spencer: “I am completely dedicated to this group everyone else too bad so sad”
Helen: “I trust you McCrae, howard we have the brains and the brawn theres different things we bring.. we can’t hang out though”
Helen: ‘i don’t know about Amanda yet”
Spencer: “I trust McCrae don’t know if I can trust Amanda yet”

Spencer warns they have to be real careful about candace because she’s lost in the game.
Helen: “I think she trusts me”
Spencer :”she may but no one in the house trusts her”
Spencer: “I will protect you Andy and Mcrae above all else”

Spencer: “Amanda is a schemer and I don’t feel she’s been 100% honest.. at one point we’ll have to fracture.”
Spencer: “Candace, GIGI and Ellissa are in no mans land they are expendable”
Helen: “Are you really a conductor”
Spencer: “Yeah I love this game I never told one lie since I’ve been here”

Spencer and Helen both say that Jeremy is the strongest player in the game. Helen calls him intelligent. Spencer explains that they want to keep Jeremy around for awhile so everyone targets him.

Helen says that Andy reminds her of Ian Terry. .Spencer: “he’s smart.. he’s not weak.. he’s stronger than I am” 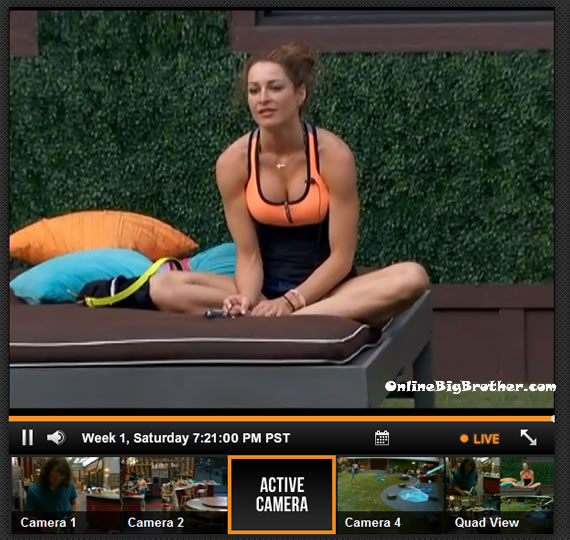 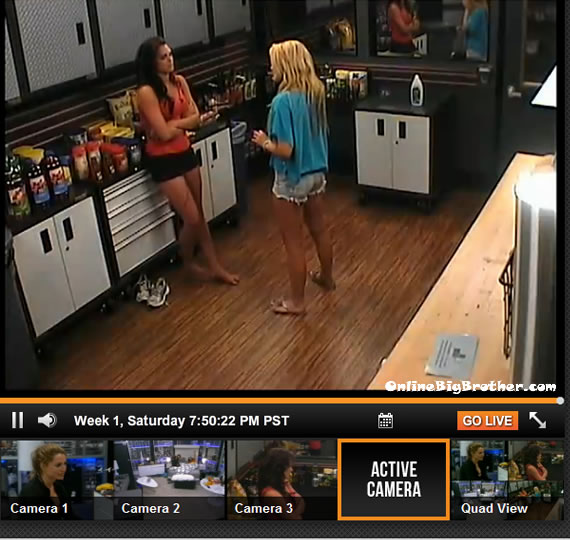 Kaitlin is worried that Jeremy is too close to her and it’s going to make them a huge target. Kaitlin: “I don’t even feel right touching him in front of Jess”
Aaryn explains how she pulled “jess” aside and told her she can be flirt with David if she wants to but don’t get between her and him.
Aaryn adds that she told Jessie to not let her and Jeremy come between her and Kaitlin because they need her. Kaitlin points out that she told Jessica to come to her if she had a problem with her hooking up with Jeremy, “And what does he do.. talks to Jeremy”
Kaitlin: ‘Is she seriously upset about it”
Aaryn: “I think she was maybe not any more”
Kaitlin: ‘everytime she sees us cuddling she mopes around for the rest of the night”

Kaitlin: “I don’t care if she’s flirting with him..”
Aaryn: “Why you don’t find him attractive”
Kaitlin: “I’m super attracted to him but it’s not emotional feelings”
Aaryn: “Thats the way I feel about David”
Kaitlin: “Like we wants to do things and I tell him stop” 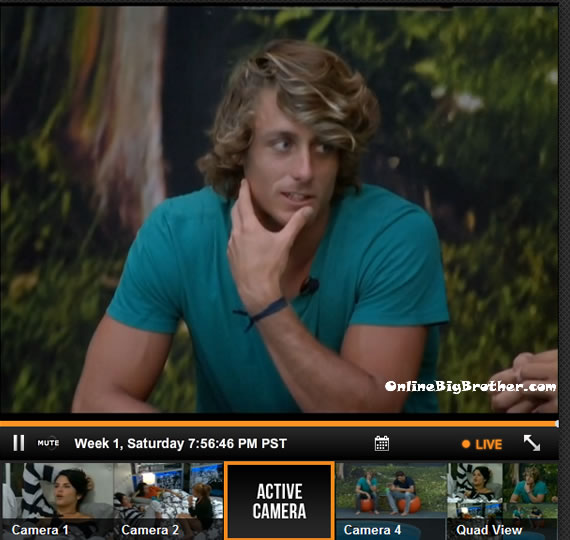 Jeremy is joking that he’ll tell Kaitlin to not sleep with him tonight so he can rub one out.
They giggle
Jeremy: “I did touch her v*g!na today.. she didn’t act like she was happy.. I like to feel around see what’s she’s working with.. see if it’s a nice meat wallet.. I know she’s on her period”

David giggles “That is why she’s been b!tchy”

This chart is changing a bit with this conversation between Helen and Spencer => http://www.onlinebigbrother.com/?attachment_id=58158

Jeremy is on thin ice with a lot of people, he has told so much BS over the last few days. 1st it was that he banged his good friend’s mom the night before he was selected for BB, who is going to believe that?! Then he says that for his HS homecoming he 2 dates with college girls…He’s full of shit, and finally Kaitlin is getting the memo.

ELISSA,CANDICE AND HELEN SHOULD TEAM UP.

Im So happy candice is nit in a alliance I think that wilk help her because will all ohf these fakw as deals and alliances being made..SHIT WILL SOOOONNNN HIT THE FAN..

and the fact that candice isnt in that shady shit..will help her in this game..

Spencer – “I want Aaryn out and I tell you why.. she is tailored made to be America’s favorite.”

Little does he know…lmao! Aaryn has rubbed the viewers the wrong way too many times. She’s jealous, obsessive, controlling, immature, paranoid, etc. The list goes on. Furthermore, what is Aaryn talking about when she says she doesn’t have emotional feelings for David? Girl, stop lying. Look at how she behaves.

Hate to break this to you, but you (and we for that matter) are a very minimal part of the viewers. It all matters what type of edit she gets for the larger audience.

Jeremy: “I did touch her v*g!na today.. she didn’t act like she was happy.. I like to feel around see what’s she’s working with.. see if it’s a nice meat wallet.. I know she’s on her period”

Are you effing kidding me?? Jeremy is soooo disgustng, wtf is wrong with these girls? Do they need attention and/or laid so bad that they are actually attracted to someone that talks about women like that? LOL what a fucking disgusting PIG!

NO respect for him at all now!! He is a pig and looking like a fool on TV

your name is hilarious.

I can’t stand Jeremy! He’s such a pig. I can’t even stand the sight of him. He just makes me cringe. He seems like the abusive type towards woman.

#BB15 to make up for the David pic pic.twitter.com/fq6k08dLQf

So obviously until we see some diary stuff, who knows which end is up as the HG’s are doing more than just talking out of both sides of their mouth, but the MC seems the most legit…and will be the first to splinter. It’s way too early, with way to many members (and HGs), in too small a house, and manipulating the game where a secret alliance infiltrates sides in order to pit them against each other is far too complex, especially when it does not seem to consist of the best and brightest (Nick is smart, Howard seems wise to a degree…and that’s about it). Whether it’s the MC being unable to keep everybody off the block (how many times have we seen a self-proclaimed “mastermind” end up on the block with every assurance he/she is safe…only to still flip the f**k out and blow everything up) or one of the guys getting pissed because the wrong person gets targeted (Each MC is going to see somebody in his fake alliance as a plan B and will blow up when plan B gets targeted for eviction).

This MC deal seems like an expansion of what happened last year with a single alliance pretending to be enemies. So even if they can avoid the other blow ups, eventually the isolation of that house will cause the guys to listen to the scuttlebutt, which was meant as misdirection, but they will hear as the real truth or 3 guys will be closer than the other 2 and that’s when the fireworks start.

Are Amanda, Mcrae, Andy and Judd the most popular players this year or something, 85 to 90% of last night’s BBAD was about showing them and so far tonight which has been almost 30mins it’s been nothing but them. If CBS wants BBAD to have any viewers left they need to start showing the rest of the players sometime too.

Good grief how many hours a day do McCrae and Amanda spend in the HOH room.

Did the producers of The Jersey Shore take over Big Brother? at least in the casting department

*Spencer: “Yeah I love this game I never told one lie since I’ve been here”

~ LMFAO there is another lie – this time to himself..

*Spencer and Helen both say that Jeremy is the strongest player in the game. Helen calls him intelligent.

~ Helen are you fucking stupid? I thought you were intelligent but I guess not if you think that fucktard is smart.. -_-