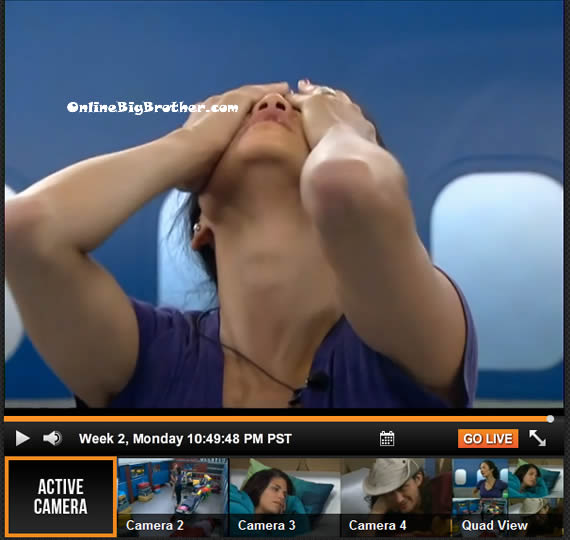 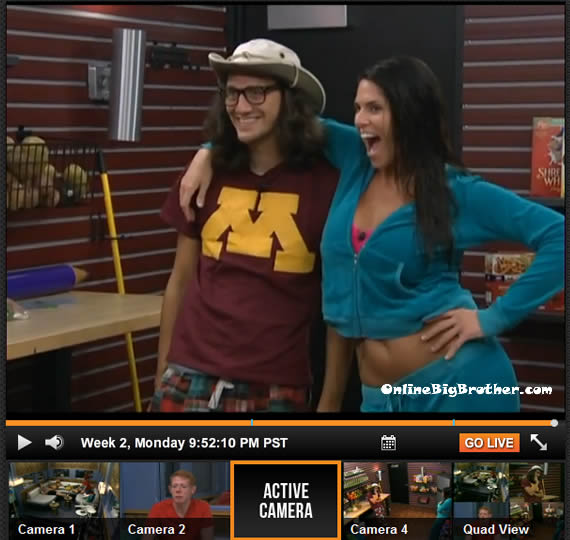 MC wondering what there best “F***” plan of attack is. Amanda: “Why what are you thinking”
A: “Do you trust him” (Nick”
McCrae: “Ya”
A: “Ok.. you look so cute right now I don’t know what to do”
Amanda tells him she will do whatever he wants her to do.

McCrae says if Aaryn is wanting to work with her then maybe they need to go to that side. Amanda thinks it’s risky because she feels they are controlling the game. Amanda: “I’ll leave it up to you”

Amanda says they look so perfect together she puts her arm around McCrae. (image above) She tries to kiss him and he jokingly backs away.
Amanda asks him what they are going to do this week because it’s kinda important.
McCrae: “We gotta go with them” (Jeremy’s side)
Amanda: “OK
Amanda starts pacing around
McCrea: “You’re heading out.. “
Amanda: ‘No I’M PISSED right now”
(She’s pissed because he backed away from the kiss)
McCrea is worried they are going to go after Amanda next.
Amanda: ‘Why would they do that”
MC: “That what I would do”
A: ‘Why”
MC: ‘Because you’re good”
Amanda: “I have too many allies for them to do that.. ”
Amanda storms out “Why do you say shit like that to me.. you make me worried” 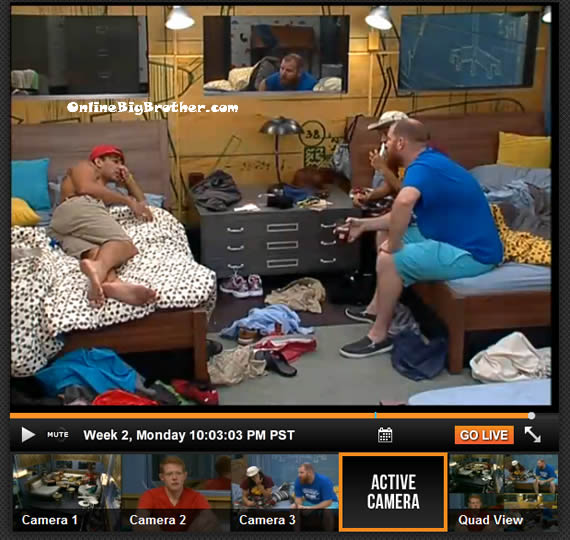 McCrae tells him Amanda is onboard with the three of them and Aaryn.
MC: ‘We just have to create the appears that we’re not together then she won’t know what the f*** is going on.. she’ll stick with me”

Spencer joins them
Jeremy tells them Aaryn is the strongest girl in this house and she is starting to question him about a boys alliance. “You know who planted that seed.. Amanda planted that seed.. but I shut it down real quick”
Jeremy: “We have to breakdown the Elissa Alliance Candace, Helen, Andy.. they have to go first all of them have to go first” .
Jeremy knows Andy comes to his side and talks then runs back to the other side and tells everything.
Jeremy: “Those people got to be cut off right now cause we don’t know who to trust”
They agree they should start talking sh!t about each other in the company of other houseguests.
Jeremy tells them every f**** week someone from MC has to win the HOH or it’s f***** done, “We have the power to… so it’s stupid not to” 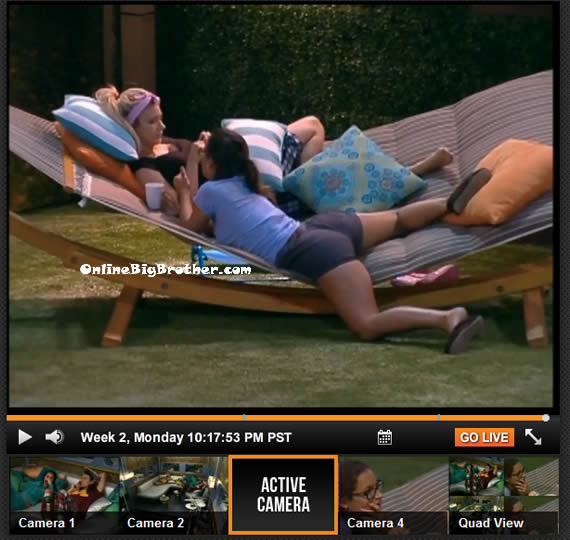 10:11pm hammock gina and Jessie
Gina says that everyone has a connection in the house and her connection is with Nick because they both live in New york. etc etc Gina says she cares about Nick. Jessie tells her to take it slow she finds it cute that Gina likes him.

Gina lets say we have a kiss 8 months from now and we find out it’s not really there.. Gina would like a kiss to see if there is a spark.

Gina asks if Nicks talked to her yet about the vote. Jessie talked to him earlier she told him she’s not voting him out. Nick had explained to her that she was part of their group.
Jessie: ‘He has nothing to worry about”
Gina just want Big Brother 15 to be fair she doesn’t like the MVP twist and doesn’t like Elissa getting it every week. Jessie agrees says with Elissa gone they have a good chance to get it.
Jessie is a bit concerned about the swing voters in the house. Jessie points out that the swing voters might want to keep Elissa in the game because that way Jeremy will just keep targeting Elissa. 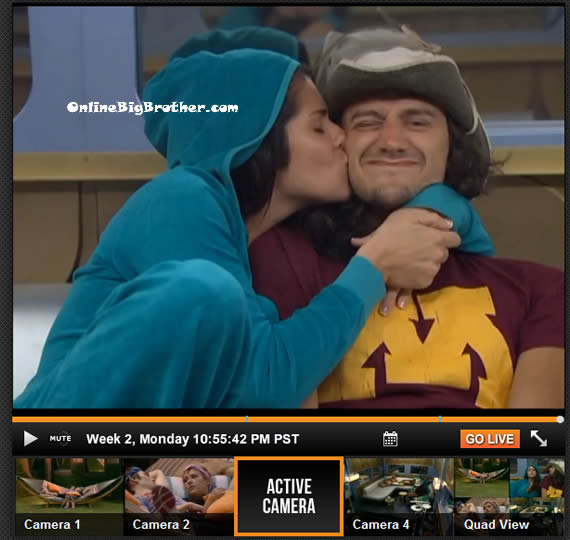 Amanda says she doesn’t trust Nick for shit. MC agress says he’s the “shadiest mofo”.
Amanda: “We’re playing with fire we have something that will work and we’re risking it.. “
Mc: “We really don’t want to be with them.. just vote with them”
McCrea brings up Jeremy saying she is trying telling Aaryn, Gina and Kaitlin there is a guys alliance in the house. Amanda wants to call Jeremy in and ask him what exactly he heard.
Amanda: “He’s trying to get everyone to turn on each other.. so ya lets get rid of Elissa.. good point”
Amanda: ‘We’re getting rid of one of our people.. A good people and keeping one of their people a shady one.. is that a good plan.. why cause we’re scared”

McCrae tells her If they take the deal with Jeremy she will be safe if he wins the HOH especially if she is close to Aaryn. Amanda isn’t sure how close her and Aaryn are.

Amanda says she’ll do whatever it is he wants to do.. She thinks it’s risky getting rid of Elissa, “If you want to take that Chance and think that we’re and somehow get off scott free .. I’ll send Elissa packing

10:48pm Judd and Helen have nots
Talking about voting Nick out this week
Judd: “He’s probably the best guy here.. but that’s the game I guess” helen agrees thinks Nick is a nice guy but he’s too shady and too much of a threat.
Helen says Nick is related to Dan he’s going to get the MVP. “He’s so close to Jeremy those two will win Competition after Competition”
We want Nick out of the house because he’s going to win the game.
Judd: ‘They are going to be mad at me cause they think I’m on their side”
After Judd leaves Helen tells her self “I need to start playing this game better.. i’m not playing it right” (See image)

(I missed the conversation of Nick campaigning with Helen and Andy.. He tried to make a deal with Helen for the following week) 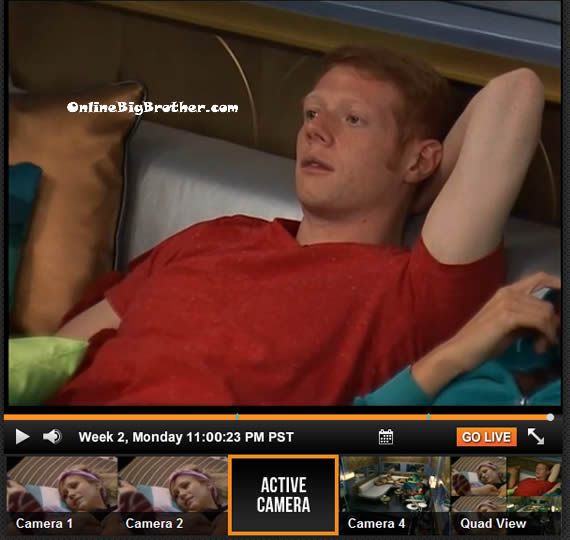 Andy going on about how much he dislikes Jeremy. He brings up his conversation with Nick and how he thinks Nick will say the “Same Sh!T” to Howard. Nick had mentions to Andy that the people he’s allied with are not Targeting Andy. Andy ins’t sure he can trust Nick.
Andy thinks the other side will be out for his blood if he doesn’t vote out Elissa especially since they are so close now.

They jokingly agree that Jessie and Candace are in the best position in the house because they are invisible. Andy is confident they have Candace’s vote “Helen’s got her locked”

Ok, so I am up watching the live feeds, and I can honestly say this about the following house guests:

Dummest and most overrated (by himself, of course): Jeremy
Most non-existent: Howard
Sneakiest: Spencer
Sly-est (but I still like him): Nick
Most unrealistic and overly-confident for no reason (and a little cray cray): Aaryn
Most mature and kindhearted: Helen
Smartest and most realistic about every house guest (she has also been extremely nice to everyone, even though they have all attacked her for no other reason than her relation to her sister: Elissa

Has anybody else seen the coverage on Entertainment Tonight and The View where Julia Chen was interviewed? Julia is pissed all right. CBS has decided to air the controversy and rampant racist comments from Aryan in particular, but Ginamarie and Spencer too. They also mentioned the petition is gaining ground. I think CBS will undoubtedly be forced to do something even though the ratings have “gone up 11%” since the racist stuff started.

I read the ratings went down 17-24% in the Huffington Pot yesterday!!!

What did she say
Reply to  Tomasa

I read the same thing, that the rating are falling.

What did she say
Reply to  Tomasa

I think the house guest need to start thinking clearly and form an alliance with Elissa. Look, think about this …. Elissa has MVP pretty much locked in her favor. WHAT if they form an alliance and Elissa asks the Benchel Army to give the MVP to members of her alliance ( Helen, Andy, Candice, Amanda, McCre, Howard). This gets the target off her back and keeps the house guessing on who is going to be the MVP. They can slowly get control of the house or at the very least get Ken(Jeremey) and Barbie(Aaryn) out of the house. I think after Ken and Barbie are out of the house Katilen and Gina will not have any where to turn and are pretty much sitting ducks.

Elissa still probably going home but I would like to see some good old campaigning and not make this a boring 3 days. I mean host your own funeral Elissa that seemed to work wonders for Dan,

She hasn’t even been campaigning because she has been reassured of the votes to keep her. Kind of sad.

I’m watching the feeds and Nick making doll eyes at GM. This is just too funny since he usually hugs her like a sister. I wonder what he is going to have to do for Jessie’s vote??

gotta get the votes

I didn’t like couple season when there really was one and I don’t like this now either. I think if we could get Aryan Nation and Jermany and all their hangers on out of the house, this game could be really good.