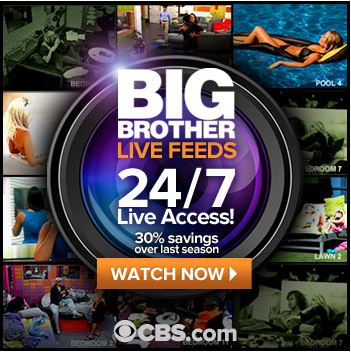 Thanks to the overwhelming response of the Canadian Big Brother fans, CBS has officially removed the geographic restriction on viewers in Canada. If you live in Canada you can now subscribe to the Big Brother 15 Live Feeds and try them out for FREE, then pay just $23.99 and watch the entire season or $9.99 per month.

Sign up today for your FREE 48 Hour TRIAL and test out the Live Feeds.

Right now is the best time to sign up because over the next few days there is going to be a lot of DRAMA inside the Big Brother house and you won’t want to miss it! Don’t worry if you are just signing up today and worried about what you have missed in the last two weeks because you can use the FLASHBACK feature and rewatch all the fights, showmances, and hilarious moments on the live feeds.

We have great news for our Canadian CBS Big Brother fans, the Live Feeds are now accessible in Canada!
Effective immediately, Big Brother fans who reside in Canada can now subscribe to watch their favorite houseguests 24/7.
CBS made the change in response to the overwhelming feedback and amazing support demonstrated by you, our loyal Canadian viewers.

If you like the spoilers and the community here at OnlineBigBrother.com please consider getting the feeds through us. For every feed sale OBB gets a cut it’s one of the ways we keep the lights on. OBB Subscription Link **–> Big Brother Live Feeds

Its not about the Canadian fans CBS..its about the $$$$

And does that mean they are going to return the favor for their next season??

amazing….. wonder why it took so long though

Is someone down to kinda give a run down of the house alliaces and atmosphere up till this point??

I’ve watched the CBS show but havent followed too closely cuz I couldnt get live feeds.

SO HAPPY! I don’t know who’s dumb decision is was to block them from Canada in the first place. Maybe Global said something? Considering Global shows commercials advertising the Live Feed.

But I signed up for the VPN and everything. Simon, Dawg – What are you guys gonna do? Would it be possible to cancel Strong VPN? Maybe I can get some of my money back?

Thank God, I was getting so annoyed with turning my VPN on and off, this is great.

Marissa87, you could use your VPN until the subscription runs out on things like Netflix. The US version has more content and it only checks IP for location, so you can sign up with a Canadian account, turn on your VPN and watch the US shows. It’s why I bought a VPN in the first place.

Maybe if you keep making anti-Canadian slurs, you can get in the BB house next year. (or don’t since the guys who run this site are Canadian)

From this American’s point of view, it never made any sense to me to block Canadians from the live feeds. From a fan or a business standpoint, it was a bad decision. I am happy for the Canadian BB fans that this dumb decision was corrected.

I have had live feeds from the beginning of big brother, but blocking us until now means I wont be buying it this year.

We just purchased the feeds!

Thanks CBS. Summer isn’t the same without the feeds. Now I can actually do some serious BB couch potato game play. Better late than never!

So they let in the Canadians, ey? A little maple syrup with some waffles and grits, ey. Sound good, ey? ey?

The BB feeds may need to go global next due to the Aryan Nation hate and exposure….BB twitter trending globally now !

Happy they came to their senses…Signed up via OnlineBB and will donate at somepoint this year to Dawg and Simon who do such a great job keeping us in the loop and where to flashback for some drama. Cheers guys and thanks to CBS as well. Canada kicks ass especially the west coast !!

Thanks for signing up for the feed through us.. glad you like the spoilers

Hey Simon, what are you going to do about your VPN?

I guess it’s not needed anymore? Or maybe, since that’s how the account was signed up for originally a VPN is still needed. Just wondering if you know anything.

I still use my VPN for other things a lot of other content is blocked to Canadians.

Haha. SIgned up just in time for my favorite part of feed watching: Trivia and the theme on a loop. Now my summer is complete! LOL!!

YES! FINALLY! Im so happy that they are in Canada now 🙂 Just bought them.

I find it ironic that after many years of wanting them, when Canada FINALLY gets the feeds, it’s for the worst season to date.

there goes my sleep schedule and productivity for the summer!