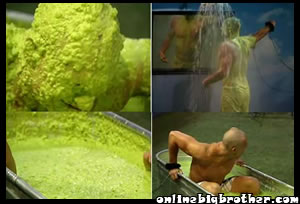 Most years during Big Brother there us some type of twist, BB 1-2 were exceptions. Sometimes the twists set the Season to be unique and engaging (BB8, BB11, BB4-7). Sometimes there are too many twists making the Season a giant Cluster fck of retardedness (BB9) while other times there is one twist that is so lame it thankfully dies after the first week (BB12) then reappears weeks later 10x times as lame. We’ve complied a list of the twists from past Big Brother Shows to see if there is a pattern in how CBS plans out their BB Twists. We can use these past Big Brother Twists as a template to try and figure out what the hell the Producers of the show will think of for the upcoming 2012 Season. There is 2 things that are almost a given A) the twist will have a element of fan involvement, ie America’s Player, Saboteur, Voting some turd back in the house and B) there will be a twist mid season to shake the house up like Coup d’État, Diamond Power of veto to ensure our favorite players stay in power.

1) A previously evicted houseguest returned to the game. This was done once 4 people had been evicted, The first four evictees were asked how much of the prize money they would be willing to give up in return for a chance to enter the house again. The lowest amount went home. After that they asked how many days would they be able to be on PB&J (Peanut butter and Jelly Sandwiches… Pre Slop rules) the lowesst number went home.. Once they were down to 2 they had the remaining houseguests vote.. Amy Crews came back in

2) This was the first season to have the Power Of Veto (POV) it was advertised as a twist but become a BIG BROTHER game staple. ( it was not possible for a nominee to use the veto on themselves until the Golden Power of veto was introduced)

1) 8 HouseGuests were initially introduced, only to have 5 Houseguests’ exes compete against them in the game.

1) Pair of identical twins, Adria and Natalie, who switched places every few days, appearing as one person, Adria, to the other HouseGuests. (to this day I still think this must of been one of the harder twists)
2) Michael “Cowboy” Ellis had a half sister Nakomis. They were unaware of their relation prior to going into the Big Brother house. It was revealed to them later.

1) Each player was accompanied secretly by somebody they already knew. Should a pair make the finals, the prize money would double to $1 million while the second place prize also increases to $250,000.
2) America’s Choice Poll, half way through BB6 the fans got a chance to vote back a evicted houseguest. They voted Kaysar back. 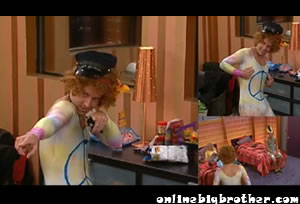 1) All 14 houseguests were from previous Big Brother Season.
2) The Coup d’État power was introduced and voted by America to go to Mike Booger it allowed him to usurp the HoH at any time and change the nominees. It wasn’t used.. LAME

1) Three houseguests were accompanied by people they already knew, they found this out when they first entered the Big Brother House.
2) One Houseguest was America’s Player, they’re tasks and voting was controlled by America’s votes. Eric Stein was the AP.

Big Brother 9 -“Til Death Do You Part”

This season was a diareaha deluge of twists
1) At the start of the show, all the houseguests were paired up. The pairs would compete for HOH and POV together. They could also be nominated together and evicted together. This lasted till week 3.
2) The first week there was a ‘Power Couple’ power. The winning couple had the power to evict one pair with only their votes counting.
3) houseguest was returned to the game despite being evicted previously. James Zinkand returned

BB10 was advertised as the season without twists and the season with the most diverse cast.
1) Americas Player from July 29 to August 7, they were given 4 tasks to complete, Dan Gheesling was voted as the AP
2) HouseGuests are complete strangers. (not really a twist but the first time since BB3) .

1) BB11 had 16 houseguests separated equally into four high school cliques. These being: Athletes, Populars, Brains, and Off-Beats. During the first HOH contest they competed to bring back one past Houseguests. If the Populars won Jessica (BB8) came back, Brains Alex (BB9), OffBeat Cowboy from BB5 (this was his second attempt to get back on the show, BB7 being the first). The competition was physical resulting in the Athletes winning and the hunky Jessie Godderz (BB10) getting brought back in. The cliques were suppose to stick together the HOH cannot nominate a member of their own clique. This clique twist lasted till week 4.
2) The Coup d’État” returned allowing the fans to vote their favorite player to receive the power, plus the power was only good for 2 eviction cycles. (Jeff received the power and used it to get rid of Jessie) 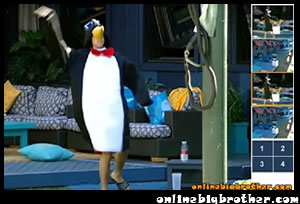 Who Opened Pandora’s Boxes?
Kevin Campbell
Natalie Martinez
What Happened to HOH
Locked in the room with a TV to watch the houseguests collect the money
Boyfriend visited her to propose and she had forfeit her spot in the POV competition
What Happened to Houseguests
Outside – Money fell from the sky for them to collect
Houseguests tormented by costume characters

This is the season CBS sabotage itself with a lame ass twist.
1) This season featured the ‘Saboteur’ twist. In this twist, one housemate was secretly playing tricks on the housemates. If the Saboteur made it past five weeks, they would win $50,000 regardless if they won the rest of the show or not. If the Saboteur is evicted, then a new Saboteur is chosen with a reduced prize point ($20,000).
2) Diamond Power of Veto was given to Matt allowing him to thwart Brendon’s attempts to evict him

Who Opened Pandora’s Boxes?
Matt Hoffman
Brendon Villegas
Britney Haynes
Lane Elenburg
What Happened to HOH
Given the Diamond Power Of Veto
relaxing day in paradise, massages, pool, food
Had to choose envelopes from a tree. Each envelope had a different amount inside, with a maximum amount of $10,000. Lane chose three envelopes totaling $91.17

This season was rather twist heavy, Firstly they brought back 3 pairs (6 total players) from past season. Rachel Reilly and Brendon Villegas from Big Brother 12, Dick and Daniele Donato from Big Brother 8 and Jeff Schroeder and Jordan Lloyd from Big Brother 11. These 6 veterans were in the Big Brother House with 4 noobie pairs giving Big Brother 13 a total of 14 players. The twist was that a pair had to be put up on for eviction and if the Power of Veto was won by a nominee then both pairs were taken off the block. After eviction the surviving pair was given a “Golden Key” which kept them safe from eviction for 5 weeks. This Golden key also prevented them from playing in the HOH competitions.

As per every Big Brother Season there was 2 pandora boxex. The first was opened by Porsche Briggs who was awarded 10000 dollars which she had to split with one other houseguest. This also conveniently brought back the DUO twist to safe Rachel and Jordan from eviction.

There you have the complete list of BIG BROTHER TWISTS. The obvious trend is that Big Brother will have one component that involves the fans and one that will allow CBS keep a popular houseguests in the house. I doubt we’ll see any grand twists like we did pre BB7 but you never know Big Brother 2012 could be a shocker!

Who Opened Pandora’s Boxes?
Porsche Briggs
Rachel Reilly
What Happened to HOH
Earned $5000 along with chosen houseguest (Kalia)
Locked in the room with previous BB10 and BB11 houseguest Jessie Godderz
What Happened to Houseguests
The game returned back to the duos twist for one week with Porsche and Kalia, Rachel and Jordan and Adam and Shelly becoming duo partners.
Tori Spelling entered the house and gave all the houseguests a 3:00 minute shopping spree

On the premiere Julie Chen announced “The 4 legends are not here to play the regular Big Brother Game they are here to coach it.”

The four coaches were Britney Hayes from BB12, Dan Gheesling BB10, Janelle Pierzina Mike BB 6,7 and “Booger” Malin from BB 2,7. Each Big Brother legend got to pick 3 houseguests to mentor throughout the season. If one of their protégé wins the mentor would win 100K and the houseguest would win the 500K grand prize.

THE COACHES PICKED THEIR PLAYERS:

On August 2, 2012 – “Reset Button” – The coaches are offered a chance to enter the game to compete for the 500K grand prize. Each of the coaches were asked in private if they wanted to hit the reset button. If 1 of them pressed it, they would all enter the game. Mike Boogie Malin was the only coach the did not hit the reset button and therefore they all entered the game. Dan Gheesling went on to make it all the way to the final 2 and was the 1st runner up winning the 50K prize.

The executive producers introduced a new twist in Big Brother 16 called the “Battle of the Block” where two competitions determined 2 head of households. They would then each nominate 2 houseguests (4 houseguests). The nominees would then compete as pairs where the winning pair would be safe from eviction. The head of household that nominated them would then be dethroned and be in threat of being nominated as a replacement nominee if the power of veto is used. This twist ran until the end of week 8.

The “Battle of the Block” twist returns and runs until the end of week 5.
The executive producers also brought back the Big Brother 5 Twin Twist with Liz and Julia Nolan trading places trying to avoid eviction until week 5. As they made it till the end of week 5, Julia then entered the house to play as herself.

My husband and I have watched Big Brother every season. We have enjoyed it. But ,now we are ready for you to invite all new people to the house. Give a whole house full of new people
a chance to win some money. Give us a chance ot get to ‘know’ a whole house full fo different people with no twists… In fact that., at this point , would be a good TWIST!!!
Thank you.,
Bonnie Unwin

We love big brother! I am sure it will be a good twist!

I have a feeling that this weeks “Twist” will be that only the Golden Key holders can play HOH? Your Thoughts?

I have watched each and every season of BB and I love this show but this vet thing is super lame and please dont try the america vote someone a special power crap and GIVE IT to Jeff! And I swear if Jordan win after spending a season twirling her hair looking like a space cadet… I AM DONE!!!