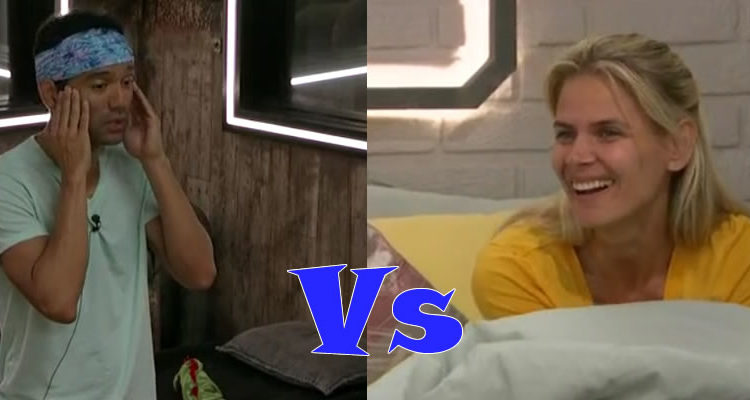 The first week of Big Brother 22 Allstars. I want to say it was EXPLOSIVE and the best week one of all time but it wasn’t. I give CBS 3 Enzo Yo’s for giving us this first week of feeds it was nice to watch. I give No Enzo yo’s to the pre gaming which is turning this into BB16. It’s only week 1 so no need to get too worried.

This is how the week went down

First, you had Cody winning the head of household competition his initial nominations were going to Kaysar and Janelle. These two silverbacks got a whiff of what was happening and decide to play in the safety suite competition. Kaysar ends up winning and using the plus one on Janelle keeping them both safe for this week. Janelle had to wear a star costume as a punishment.

Around this time Memphis and Cody magically developed an alliance final 2, ride or die, all the way bro. Out of nowhere, they had a fairly detailed plan on how they will construct their group.  NicoleF is also is with Cody and this group.

Cody picks Keesha and Kevin as his nominations with the target being Keesha. His real reason is she was close to Kaysar/Janelle and is a easy nom. She didn’t really talk to anyone. The veto is played and Enzo comes out on top riding that banana. He of course decides not to use the veto and the nominations stay the same. Essentially Janelle and Kaysar do all the campaigning for Keesha early on but soon realize that it’s a lost cause. Keesha is done for.

There’s really too many alliances going on right now. I would like to say there are players that have a good read on the house but at this stage, everyone is coming up with some ridiculous theories about who is working with whom.

Results from the show


Keesha – it has been great to be here with you guys.. Ugh I’m always so emotional… It’s been amazing.. umm ..
Kevin – Alfonzo I love you and look forward to another 20 years with you

Q1: Kaysar and David out
Q2: Enzo and Dani out
Q3: NicF and Christmas out
Q4: Kevin out
Q5: Janelle and Ian out
Q6: Memphis is the new Head of Household 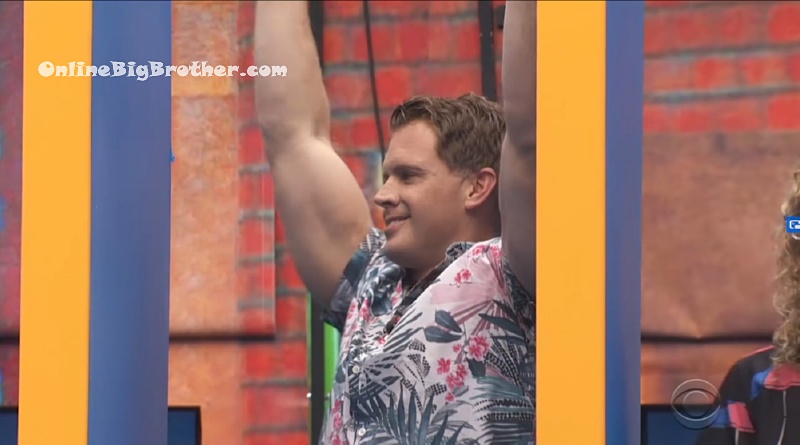 Who is Alfonzo? Did I miss something?

The Beef
Reply to  Anne

Memphis as HOH, Ian and Bayleigh will be nominated

Wait what? Janelle will be nominated?

She could be.. just assume the worst.

All hopes of a decent season will be lost. I’m hoping for Christmas and Enzo wait no, Nicf and Enzo. But that’s not going to happen.

Is no one going to mention Enzo flipping off Dani in hall during the voting?

I caught that too. Why??

The Beef
Reply to  Simon

Well we know Cody is not going to let him nominate Nicole F., Dani, Tyler, Da, Bay or Enzo, He likes Christmas, so she’s out. That leaves Kaysar, Janelle, Ian, David, Nic A. and Kevin. I’m betting it will be two of those six.

if bay is his pawn bay, day, nicole a, kevin, david i could see targeting memphis in future weeks if any won hoh

Yeah I think you’re right it might be Ian and David?

Stand down with the shrine building . ;)

tyler/cody may try steer him away from bay as the pawn, so yeah it could be david or nic a i suppose(i doubt they do kevin again)

jani/kaysar may be safe another week, but safety comp and veto, and possible pushing from the other 5 in memphis’ alliance could still potentially land jani/kaysar in hot water

Who did Memphis name as his targets 2 days ago?
LOL.
I thought he mentioned ian, bayleigh, kevin, nica, kaysar.
That’ll change.

Who would have thought that week 2 of All-Stars feeds and it will already be a re-run of the previous week!

K or J unfortunately going home and neither of them even see it coming.

If Janelle or Kaysar go home this week this season is going to get very boring very quickly.

All Stars???
Reply to  Kevin

Maybe there will be someone coming back.

I want the winners to be out and the floaters I don’t have a favorite I hate Nicole F and Christmas though think someone who hasn’t won should win !!

Though a lot people don’t like Nicole F, BUT at least she’s is good at playing the game!!

They fact that big brother brought in some very questionable players
(Davonne, Nicole a, David, Bayleigh, And Xmas) that were not good competitors or good players in their previous season. In the long run is going to hurt this season because of their additions!

I mean Davonne tries to come off as a strong competitor in yet has never won a competition in three seasons.
She got evicted week two in her original season why do they keep bringing her back for drama especially on ALL STAR SEASON when she kills the game being played!!!

Most people have waited 12 years for Keesha to get a second chance or for that matter a numerous amount of other players that have proved to be better overall game players and competitors of Big Brother in yet Davonne has had three chances in six years to prove that she doesn’t seem to have a clue about what is going on, using her intuition or social game to her advantage, as far how to get ahead of the game as a far as to keep the numbers in your advantage.

I mean Nicole A got to the end because she was completely harmless and was a completely passive player – even on one of her HOH wins Cliff went home.
I think Nicole A is an incredibly likable person- she’s seems like she is really good person at heart.
It’s just she’s just not worthy to get back on an all-star season because she’s not aggressive enough!!
I just had a huge quit at the beginning of the season that bringing that her and David this season just is not a good move strategically considering how passive they seem in making MOVES!!

In a Season like this it does not help at all to have a Nicole A or even someone such as Kevin to just float in to the abyss and just layover for the other side of the house and not catch on or have any remote idea and order how to put in numbers to defend himself until it’s too late at the Point where you become expendable!!!

At this point they’re completely feeding in to what is going on and not helping form any RESISTANCE!!!

Sigh…this could be a long week

yup the most boring HOH

The Beef
Reply to  Robert

Frankly, with Memphis as HOH, I doubt if anyone aligned with Cody will play for the safety.

If Memphis were smart:
String along the other old schoolers as his back up shield for votes. Next week.
Ride with his joke alliance people. He thinks it’s real. So does the show edit.

So Nicf is in that alliance. Will stand up for Ian.
Cody and Dani decided last night they want to roll with da, bay, enzo. possible swing to keep bay off the block? Use Kevin as a perma pawn talk sure to happen.

But. Memphis thinks he’s running the house and the game (as per three different conversations in different circles of the house). Well except for Janelle and Enzo’s perception, that he isn’t involved in the game at all.

Is it possible that Memphis will learn in his nomination talks with Cody that his “alliance” is not all that he thinks it is? Maybe only if he wants to nominate Enzo, which of course Cody will resist. I don’t think Memphis will go in that direction though. I think he’s going after Ian and either Kaysar/Janelle, or Ian and a pawn, like Kevin or David or Nic A. Cody would likely go along with any of those combinations.

I sure wanted Janelle to win HOH! I can’t stand this Vote With The House Crap. These people are supposedly All Stars and they need to play like it(I know, it’s early in the game).

Right. And Bayleigh thought that you were supposed to go with what the HOH wanted, at least that is what she said. No wonder she had the HOH itis in her season

All Stars???
Reply to  Chessie_K

Chessie_K
Reply to  All Stars???

They sure do and I despise them most of time

Da’vonne seemed quite please when Christmas and Janelle went out of HOH.

Booze. a small delivery
What could go wrong?

They didn’t even hint at the possibility.
Just hey thanks see ya later.

Keesha deserved a hell of a lot better and much more of a second chance than a lot of these houseguests especially considering that she had to wait 12 years to get hers whereas Davonne gets to play the third time in six seasons!!!! I Never would’ve thought a week 2 evictee in their orginally season would get three chances to play !!

Especially when you consider Keesha went out on a timed HOH competition on opening night having all the women go all the way to the end of the board and oddly enough she had to compete against five men in the veto competition week one – odds couldn’t of been more stacked up against her.

– I’m glad Cody lost to Derrick And didn’t take the worst player in Big Brother history Victoria with him to the end!!!

a female (dani) is being nice to janelle, laughing, joking, having some wine, having a good time

production please give them more wine!

(as xmas and snakeole smack talk janelle in another room)

another name
Reply to  Feeds Gold

Yeah, Dani is only nice to Janelle after she’s crap talked her.
Wonder who it could have been involved in telling Christmas it was Janelle not Da’vonne that put the blame on Christmas for last night. hmmm.

Feeds Gold
Reply to  another name

janelle cheered up dani when she was crying yesterday, and dani refers to janelle as the queen of bb

down the line, if the circumstances are right, i still could see jani and dani linking up

another name
Reply to  Feeds Gold

Her reference to Janelle as the queen of bb was derogatory during a janelle bashing session that Da and Cody were having.
She was implying Janelle is full of herself thinking she’s the queen of bb and she’ll knock out the other women to ensure she maintains the title.

Feeds Gold
Reply to  another name

despite that bash session, she said “when you think of who is the queen of bb, you think of janelle”…(thats danis opinion)…it is a compliment, even if shes drawing negative attention to her, and even though the 2 are currently opposed, i do think the 2 wouldnt have a major issue working together in the 2nd half, as allies leave

LOL. From what i gathered while I was away for part of the afternoon:

American viewers not knowing what to think when eviction spoilers come out on a usbb season: oh this is fake. it’s got to be they’ve always evicted live.