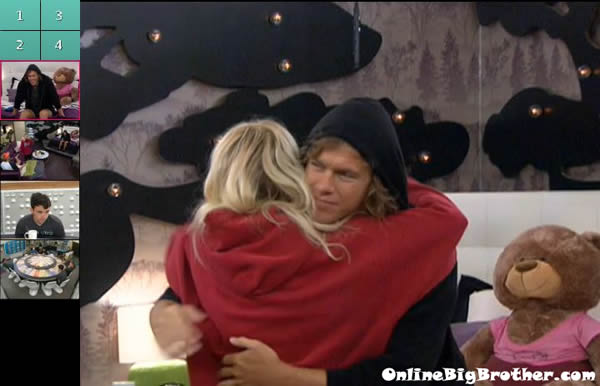 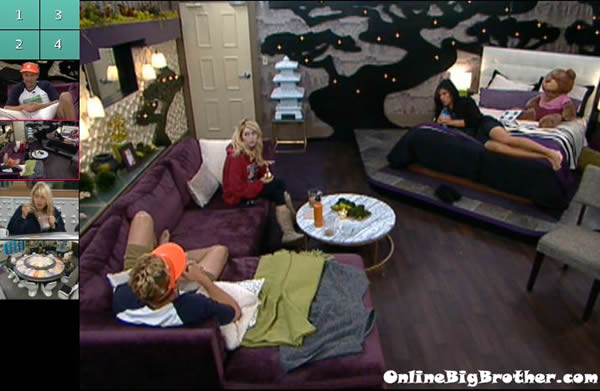 10:50am Frank says if later on in the week we find out that we can’t get out Willie then we can talk more about it then. I don’t like to have those conversations too early because loose lips, sink ships. Mike comments on how if you align with another coach you make 3 people off limits. They discuss the coaches competition starting. Frank says so seriously, what would you do if you won today Britney. Britney says I feel the only way Willie is going home today is if he is on my team. Frank says he doesn’t think so. If you were going to trade I would want you to trade with Dan. Britney says so if I did that I could potentially keep 3 players. Frank says yeah. Britney says that Dan might be just what he needs to rehabilitate his image. Mike says that Dan coaches inner city school kids to play against rich catholic school kids. It could be dangerous him being over with Dan. And then you have Danielle and Jojo who really haven’t proven themselves .. Mike tells Britney that she had Janelle up until part way through the week. He says that he was the one that told Janelle to go after Dan to knock him out. Britney says the way I see it, it’s lose, lose, lose for me. Britney says if I can just ask for one things …just don’t make it awkward. Britney leaves. Frank says I just want to make sure she doesn’t trade with one of our players. Mike says that she won’t.

Watch the 24/7 Uncensored Live Feeds of the Big Brother house 3 Day Trial!
11am – 11:35am Shane comes up and joins them in the HOH room. Shane says that he knows he is going on the block, I had the chance to take you off the block and I didn’t. I have the chance to not vote you out and I did. He says that he made a deal to stay true to his word week one, but that is over I want to separate myself from him. Mike says it was foolish to stay with Willie, but it showed me that you were very loyal. I am about to play for something that could allow me to trade someone. You are someone that has the ability to stay loyal. I am considering trading for you with one of my players if I win. Mike says that he has not told Britney this. How would you feel about the prospect of coming over to this side. Shane says that is an individual game and I don’t care which coach wins. Mike asks so if it comes to that and Jojo goes up how would you feel about voting her out. Shane says like I said this is an individual game and I already talked to Jojo about that this morning. Mike says he is so thankful that the possibility isn’t there for Frank to be traded. Frank comments on how it is obvious that you (Shane) are a trust worthy and loyal guy. 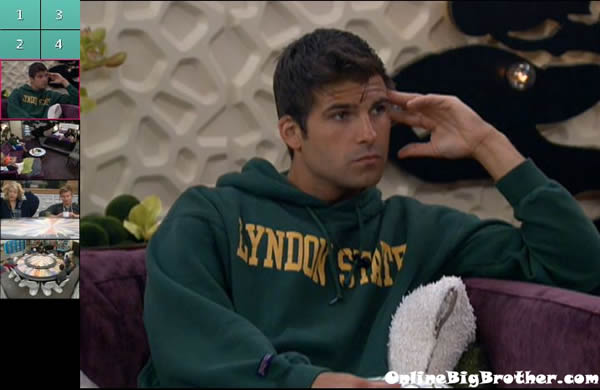 Mike asks if he tried to control Willie at all. Shane says no not really, honestly I thought Britney would have tried harder. Mike asks if you aren’t traded and you win HOH next week who would you go after. Shane says I don’t know. Mike says is Frank a target. Shane says well if I’m not aligned with him then yeah he is a physical threat. Mike says so Danielle and Jojo would be off limits. Shane says well Danielle is a weak person, she was crying all day. Frank tells Shane …obviously if we trade for you then you won’t be going up on the block. Mike says how about this ..assume theres no trade at all this week… there is another option for Frank to nominate Jojo and Willie. Would you trade a one week deal? Shane says that he would give Frank a two week deal. Mike says OH double! Mike says what you need is time, you need time to separate yourself from Willie. Shane leaves the HOH room. 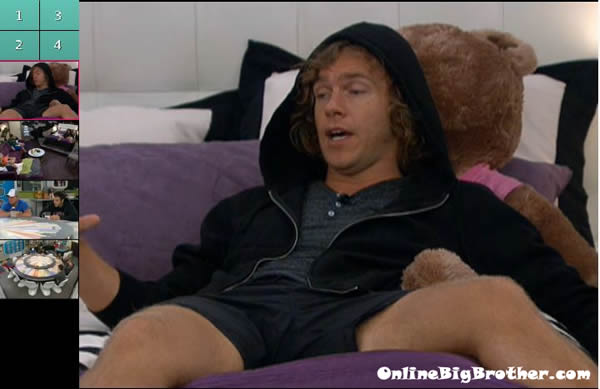 11:45am – 12pm Mike and Frank comment on how Shane isn’t that smart or good at this game. They talk about how he is nice. Mike says that he doesn’t know if he feels better or worse after that conversation. Jenn, Ashley and Wil come up and join them. Mike says that at least Shane came up here to say that he messed up and that he is ready to jump ship. He says that Britney is still defending Willie a bit and when Willie was going crazy she was sitting there with her hands on her head. As a coach you cant do that you need to step in. If Willie wins Power of Veto, then we get Shane out. Mike says that Willie freaking out was the best thing that could happen to us because it brought us all closer together. 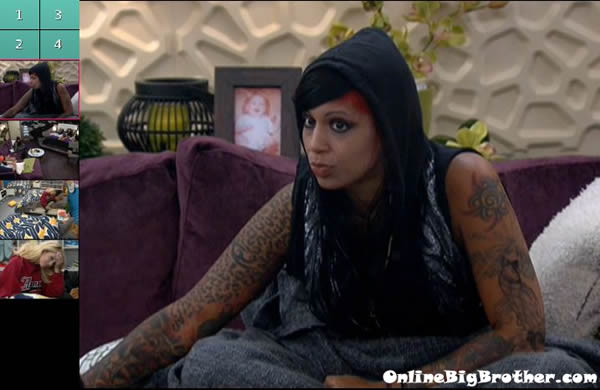 Typo in the headline! It should only have “lose” twice because Britney can only see in 2 directions at once! Drink!

I think what Willie needs to do now is lay low the whole week, be nice, be quiet and come out like a beast and win the POV.
That’s it, it’s his only chance.

Damn I hope brit wins..she need to save shane atleast he won something..and hope jo jo or willie get pov.

In my opinion, Willie needs to relax, chill out for whole entire week and start winning. So that he won’t go home.

I’m a fan of Britney’s team as it is right now, but if I was Boogie/Frank I would definitely aim at getting out Shane this week. Willie, in the position he’s in and whether he switches teams or not, is going to be a target regardless next week. Shane isn’t. Plus Shane looks like he’s a stronger competitor than WIllie both mentally and physically. The houseguests were stupid not to get Frank out last night, so if they want to redeem themselves, they should definitely aim for Shane.

Of course, since it looks like Kara is in sequester, Shane might have a good chance to come back anyways if he’s off’d this week.

if brit wins she should trade wil and willie. willie in janelles teams would be fun!

Here’s my choice if one of four evicted houseguest will come back:
-Jodi
-Kara
-Willie or Shane
-Wil

The first week of this game has made it super intense this season, so its hard to guess where the best step lies. You have the coach’s challenge to give one team member a week pass, make one team member a have not, and possibly trade a team member if they so choose. That is hard to bank on your nominations already. Plus, you have to wonder if Willie, if on the block will win the veto or not put him up, pray his name is picked for POV, and then back door him. Shane is the target behind Willie without a doubt, but I agree with what everyone has said separately…Willie on the jury isn’t an option for a lot of them. I had hopes for Willie, but he sunk his ship quicker than BattleShip in the US Theaters…

BIG BROTHER SPOILER GUYS —- Joe is wearing a blue shirt!!! Seriously, did this guy bring any other shirts to the house!?

what a tool, soon he’ll be walking around in a chef hat

To be fair they do take away a lot of clothes…

There are too few people in the house. What if they have some new players in sequester and they do a coaches challenge to win the right to add a player of their choice? Maybe Willie and Kara will have a chance to come back? There are two weeks not accounted for, so there has to be a twist.

why is jenn talking game? she’s the new adam all talk no action

There’s only been one real eviction!
I don’t blame her for not talking too much game. It’s too early. She is where people are usually at the beginning of Big Brother. Plus I think Jenn is the last person anybody wants to evict (maybe tied with Ashley). If she continues this until the end then I will hate her though. Sadly, I feel bad for her for having Boogie as a coach. He’s good to Ian and Frank but, ignores her. I doubt he’ll trade for Shane but, if her does it might be with her.

Just have to chime in and say that Dan is not coaching “inner city” kids exclusively.
I live in MI, and the school he works for is in one of the richest areas in Michigan, and the tuition ranges from 10,000 a year to 27,000, depending on if you board at the school. Now probably there are scholarship players (I am sure they recruit, even high schools do that), but the majority of kids that go there probably are not “inner city”.
Maybe Mike/Boogie has things confused, or Dan gave the impression most of the team was that way. Not sure, just wanted to make it clear in no way is the school itself “inner city”.

Trading for Shane would probably be a good idea for Boogie, since Frank is a pretty big target. That way he’d have 2 strong players competing.