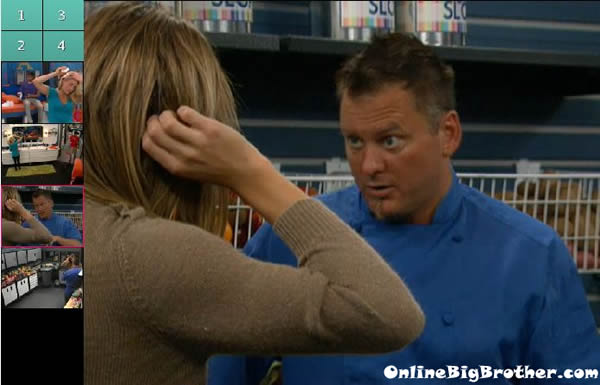 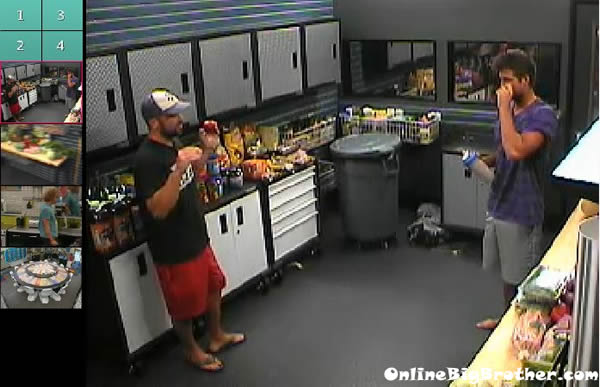 Sign-up for the Big Brother Live Feeds and get the MOBILE Feeds for FREE!
10am Willie goes into the storage room with Shane and tells him to not feed into what Mike is doing that he is just trying to divert the attention because his guy is on the block. Willie says I am not trying to tell you what to do, just don’t say anything ..let him say what he needs to say. He says Britney and Janelle will fire back. Shane says okay. They both leave the storage room.

10:15am Shane, Wil, Kara, and Joe are talking about traffic and parking in LA and New York. Shane asks Kara what she wants to do if she thinks being on the show will enhance her modeling career. Kara says that she is kind of over modeling and wants to see what else is out there for her. 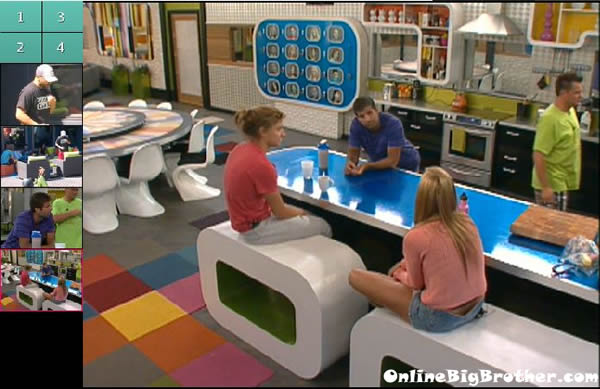 Superpass Live Feeds: 3 Day Trial!
10:30am Frank and Mike are in the stereo room whispering. Frank tells Mike what Joe had told him last night about how right now he has the votes to stay. Frank says that Joe also told him that Kara had a blow up when they were trying to talk to her and that hurt her chances of staying. Franks says that Joe also said that he would let him know if things chance. Mike says that’s great, I was almost going to throw Joe under the bus but he could be our secret weapon. They then leave the room. 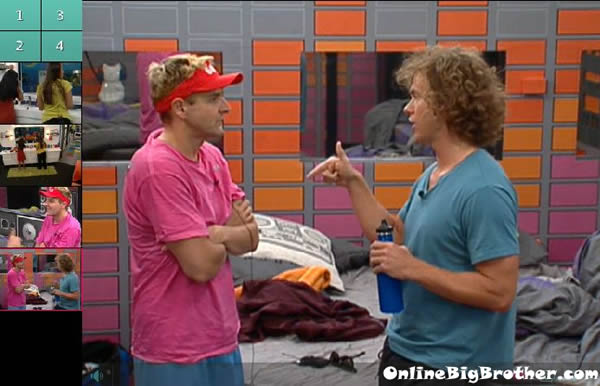 10:45am Frank, Mike and Willie are sitting on the backyard couches. Frank is talking about how he has to give a speech today for the POV ceremony. Mike tells him that nothing really needs to be said its all behind the scenes, just say something funny. The conversation then changes to talking about comedians. 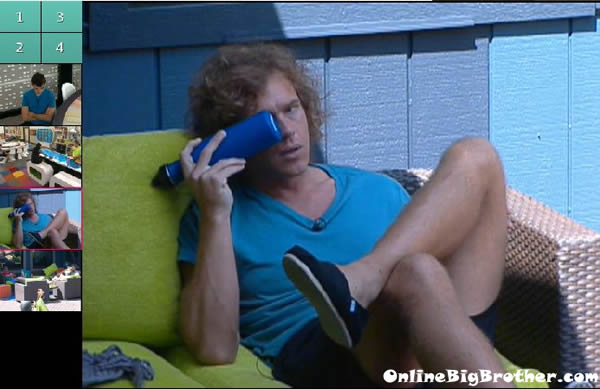 10:50am Dan and Shane are in the arcade room talking. Shane tells Dan he could keep Kara if he was guaranteed safety and he’d also be getting rid of a threat. Shane says that at the same time evicting Kara means keeping a threat and some attention off of him by keeping a target in the house. They break up the conversation leave the room.

11am In the storage room, Wil and Joe are talking. Joe tells Wil that last night Frank and Jenn asked him to be in an alliance with them. Joe tells Wil that they told him their first targets are Shane, Willie, Wil … so you’re a target. Joe says that they told him they are going after the strong players. Joe tells Wil that Frank thinks he’s safe only because he has a deal with Mike. Wil tells Joe to go straight to Willie and tell him not Janelle. Joe then heads up to the HOH room. Joe then tells Janelle everything. He tells her that Frank had said that his target was Danielle but now told him that its Shane and Willie. Joe tells her that Frank is totally lieing. Janelle says that we need to tell Willie. Joe says that Frank had said that Mike knows the “girls” (Janelle & Britney) want him out.

11:10am The live feeds switch to TRIVIA … The power of Veto Ceremony is happening now..
Sign-up for the Big Brother Live Feeds and get the MOBILE Feeds for FREE! 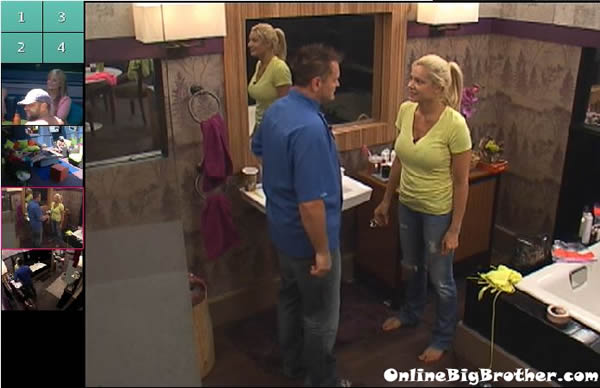 12:15pm When the live feeds come back Britney and Willie are up in the HOH room. Britney just told Willie that Frank is running around the house telling people that he is coming after him. Willie says that he read Frank wrong and thought he could trust him. Willie says that everything he has heard comes back that he isn’t coming after me next week but after that he is. Willie asks Britney what do you wanna do babe? Britney says that the problem is that we just spent the last week trying to get Kara out … packing her bags and giving her a swift kick in the butt. Willie tells Britney that she needs to win the key for him. Willie then tells her that the first person to go from our team when it comes to it ..is Wil. Shane then joins them up in the HOH room. Willie and Britney tell Shane great job today! Willie and Britney then tell Shane everything that is going on with Frank coming after Frank.

SHANE did not use the Power of Veto 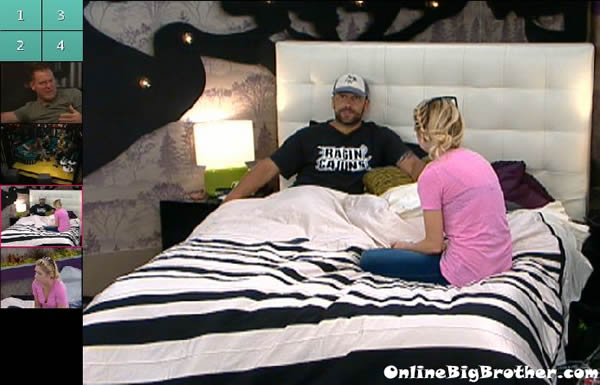 Boogie and frank shot themselves in the foot by overplaying their hands but hoping frank and boogie pull it out and stay this week …. Plus joe is a little bitch you can’t win by ratting everyone out and Willie is just dumb lololol

It’s going to be funny to watch Willie try to ack like his brother!

So is what Joe is saying to Wil and Janelle true?

There is no way frank is staying in this house.

Frank could stay in this house. Britney and Janelle want to get rid of Dan before they will be allowed to play the game. Britney had to use bobby pins to show Janelle how many people would leave before the time where they thought they would be entered into the game. So if they can convince all of their followers to vote out Kara Frank might stay.

did frank really say that?

If anyone had half a brain they would get rid of frank now!

How do you use flashbacks on the BB3 Viewer/ superpass? :(

So no one knows whether Frank really proposed a deal to get rid of Willie and Shane to Joe and Jenn? Or is Joe just trying to rally everyone to get rid of Frank? Man I want there to be a fight so bad. Joe needs to be exposed! He’s a punk. Going around talking shit about Boogie and Frank, but won’t say anything upfront to their face.

Kara or Frank? What is everyone thinking? Its getting interesting now…

EXACTLY I am not sure who they are going to get rid of this week. The keeping changing their talk from getting Kara out to getting Frank. It will be interesting to see who gets evicted on Thursday.

Joe is a f**king snake!!! They need to call him out on his bullsh*t!

Horrible. We’re going to be stuck with the Kara the bore wh*re.

Big Brother needs to get their f**king life. -_- How are they going to have the feeds showing, but play the BB theme song? Or is it just doing this for me…

Does anyone know who is a floater and who not?

Joe is lying. I heard the whole conve! rsation on live feeds. Frank DID NOT say he was coming after Willie at all. Joe is a coward and is scared of Frank. Remember how freaked out he was when they had their big meeting when Willie said they were going to save Frank.

Joe is a coward and liar period. Obviously, everybody else is just STUPID

Yeah I didn’t hear Frank say that either. Thanks for saying, because I thought I might have missed it. Joe is a snake and he could go far. I really want Frank to stay.