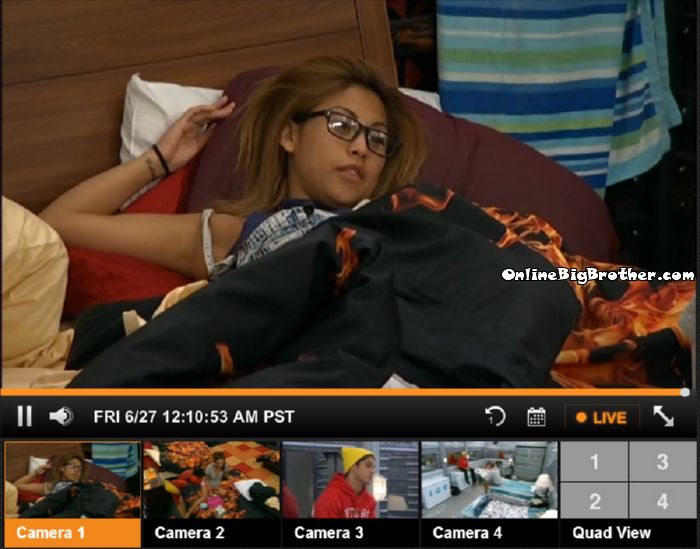 Battle Of the Block Results

POW POW (Paola) is worried people do not like her. Brittany is telling her not to be miserable and sad because she might win POV tomorrow they have no idea what is happening. Brittany advises her against shutting people out. The more Paola acts down and anti-socially she help Donny because he’s building friendships.

Britney points out that Donny is “bummed and quiet.. I see a huge difference in Donny.. he’s feeling the same emotions as you are..”

Brittany – “us four were feeling the same way this week.. now I can breath and be me”

Brittany says she’s been in the shower crying cause she misses her “babies”. She points out that Nicole has been crying a lot and people notice that it’s putting her at a disadvantage.

Amber and Devin join them.. they are reassuring pow pow she’s not out of the game yet she still has POV and votes. POW POW talks about getting hurt during the Battle of the Block Competition

Devin starts giving Paola advice about what to eat in the morning before the competition. says she should eat light but enough to fuel her cause the competition might be a running one.

Devin – “The best thing to do is get a great nights sleep tonight .. get your mind ready.. tell yourself you are going to win” 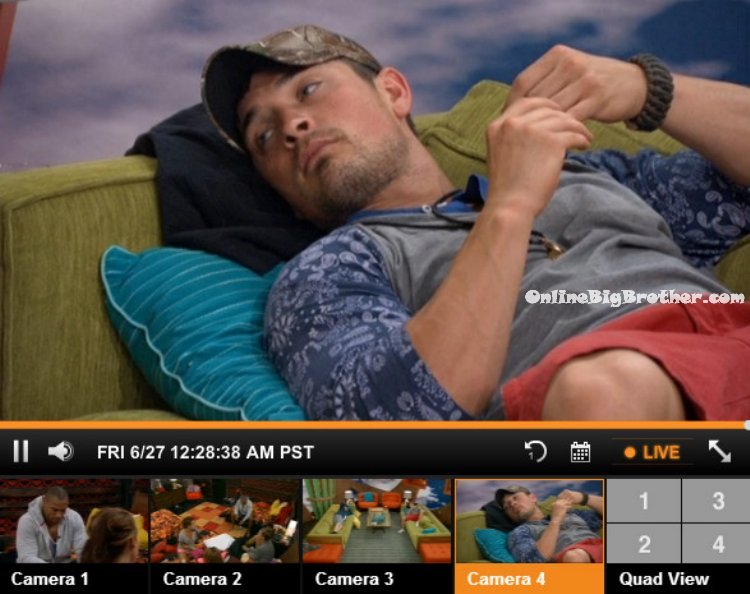 12:10am Camera 3 & 4 – Devin, Zach and Cody talking. Devin talks about how he and Donny have a Double D’s Alliance. He says that he feels bad but that if it comes down to it and Donny has to go its what has to happen. I will just tell him at the door that I’m sorry but I just didn’t know if I could trust you. Devin says I would do it right at the door just so I could say it and close the door… that way he couldn’t say anything. Amber joins them. Devin and Amber leave. Zach asks Cody why he chose to do this. Cody says because I’m a big fan and the opportunity presented itself. Zach says man we’re going to cruise to jury!! Cody says alright I’m going to sleep. Zach leaves and Cody shuts off the lights. He complains about how dark it is. 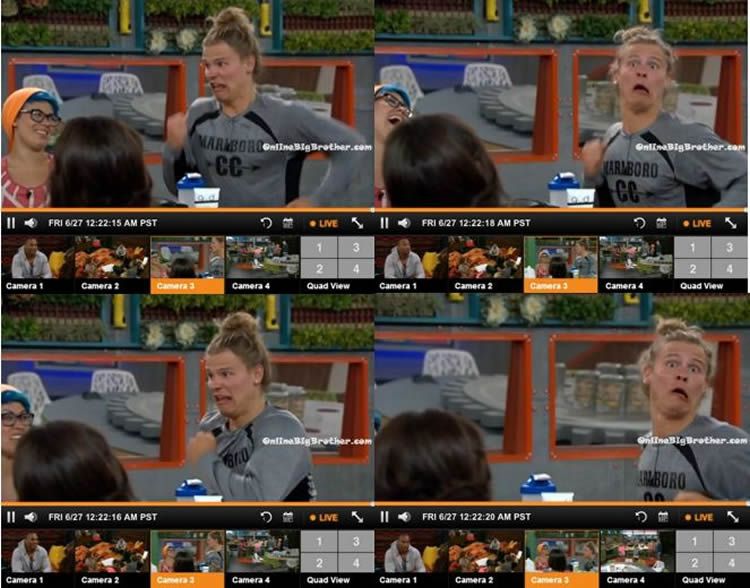 The cameras switch to the kitchen with Joey, Jocasta, Hayden, Nicole, Derrick and Victoria talking about random things. Hayden then immitates Joey running n@ked through the house when the feeds first went live. 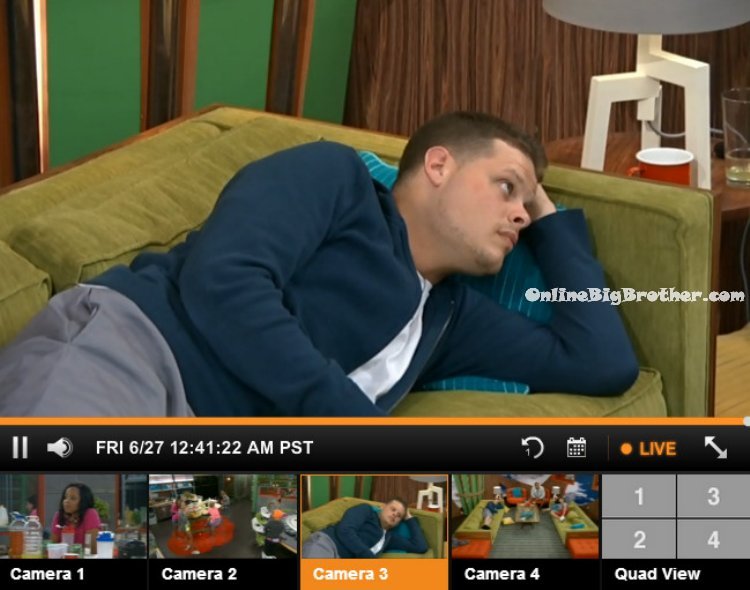 12:30am – 12:45am The cameras switch to Derrick and Caleb in the living room talking about Caleb liking Amber.  Devin joins them and he talks to them about the competition tomorrowtomorrow. He says that he things it’ll be a mental competition because the last two have been physical. 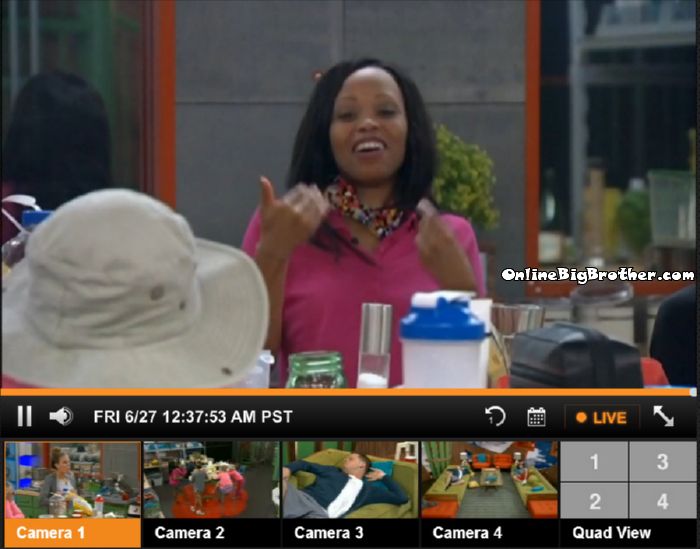 12:38am kitchen in and out houseguests

Jocasta joking around telling them about how much food Devin eats. Says the rest of them are going to be “frail” do to the lack of food. 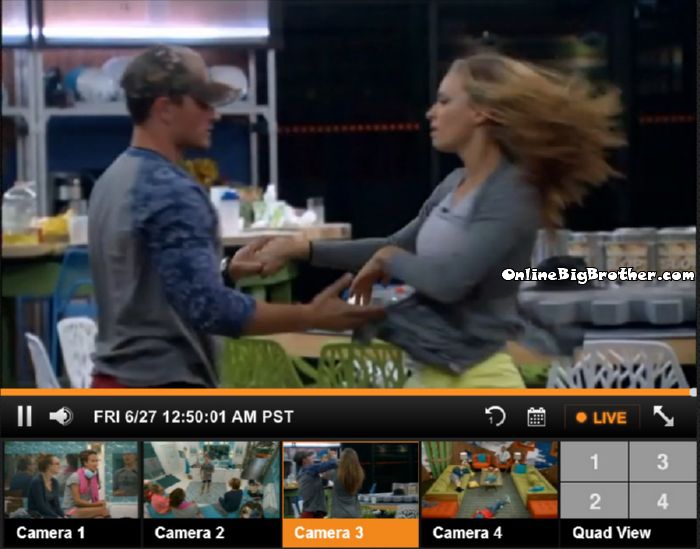 12:50AM Caleb and Amber dancing

Big Brother 16 Live Feeds Subscriptions, if you don’t have them yet what are you waiting for! Free 2 day trialTry It Free! Subscribe now to the official BB16 Live Feeds

Frankie and Amber cuddling, she tells him she wishes they could be boyfriend and girlfriend, cause Frankie would treat her right. Amber leaves. Devin pointing out how Frankie is getting all the Amber attention. They joke that Caleb should be gay then he would get the attention. Caleb point out how when they were doing the photoshoot frankie grabbed Amber’s’ butt cheeks. Caleb jokes that his brothers told him to act gay so he would get all the girls. Devin asks Frankie for a hug. 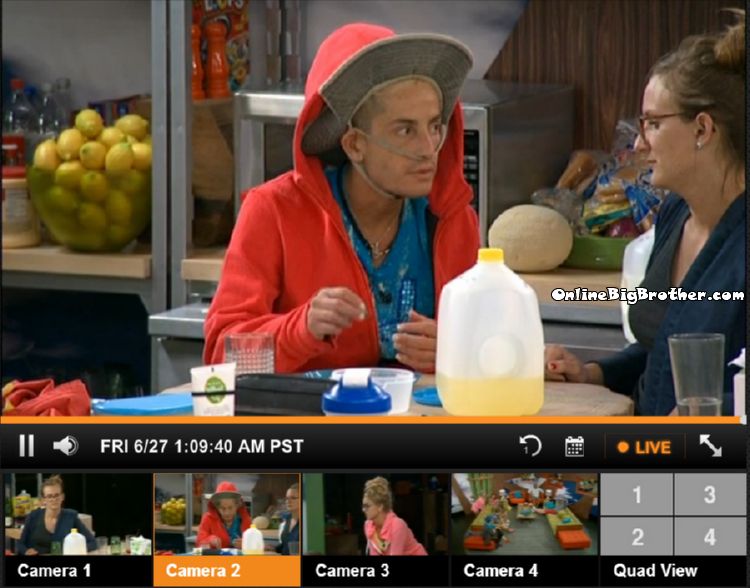 1:10AM Frankie and christine

Frankie says they need to touch bases tomorrow, no rush but they need to sooner than later . Frankie- “I think we’re good anyways.. theres not rush”

Christine – “Devin is scaring me” 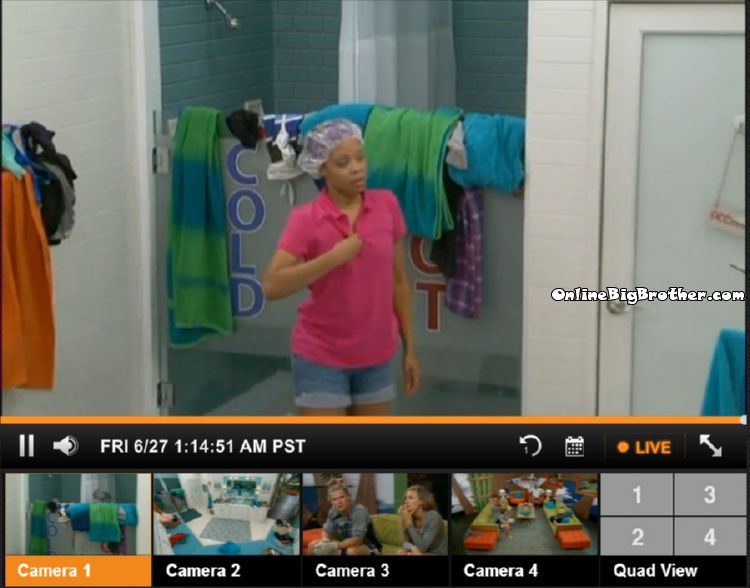 1:13am Jocasta takes the bowtie off to shower.. WTF! 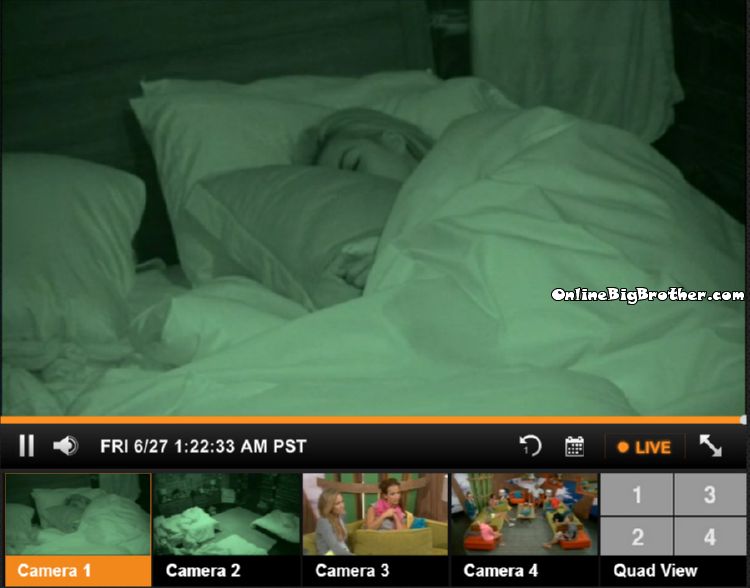 Christine,  Victoria and Nicole are “scared” of the green light. (Sounds like Victoria cannot sleep in the same room as a boy Devin brings it up) 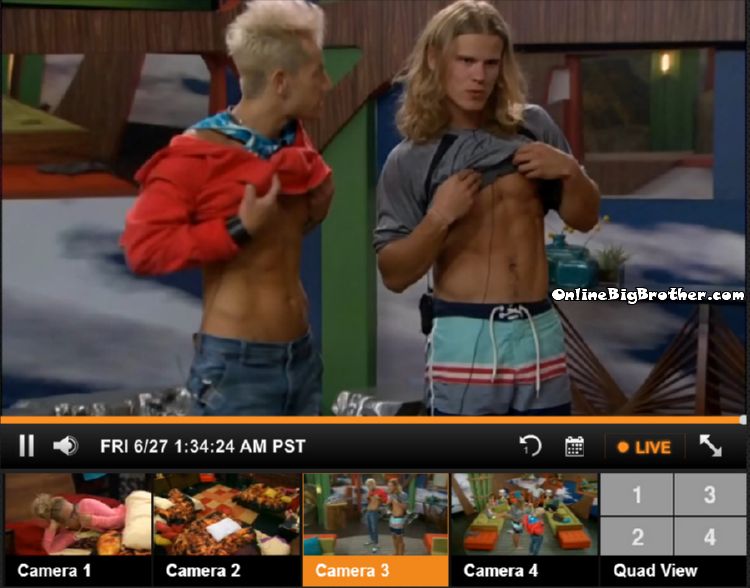 1:37AM Living room Bunch of House Guests milling around random chit chat and joking around.

Frankie and Hayden comparing Abs.
The houseguests are bored, Production keeps calling them into the Diary Room. Cody who is sleeping in the HAve nots has been called. Cody stubles out of the room. Brittany says “At least he looks hot”.

It’s still too early too judge this season bro, give it another week or 2. It’s still better than last season.

It is way too early. I’m still trying to remember who is who and have to keep looking at the photos at the top of the page. One person who I really hate already is Joey. I’d like to see her eliminated just to see what happens with the America Alliance

I agree. I hate her the most. I see here like a BB14 Jen kind of player.

Oh no! Are they planning to send donny home?

why the hate for devin?… and christine seems like the crier/talk under my breath type

seeing how brittany, nicole, christine, victoria and zack and frankie have all said devin is super emotional and off the deep end tonight, i would say devin may actually be the problem :/ he does seem emotional and maybe easily irritated. a big guy like that, he’s going to have a target on his back.

1st Day:
I don’t hate… Cody, Donny, Hayden, Amber, Derrick, Joey (questionable judgment), Frankie (playing too hard), Zach (in due time?)
On the bubble… Caleb, Paola (GM 2.0), Nicole (I want to like but…) , Jocasta/ Brittany (irrelevant predicted floaters), Victoria (could either become irrelevant or the next Demanda)
Hate…Christine (The one you expected to like but do not), Devin (Speak 80% less, go 80 times farther)
Overall the casting improved but statistically speaking; the twist kind of makes it so that there is an incentive to float :(

Just a little thought; There was a show on the Disney Channel called “The Suite Life of Zach and Cody”

With all the racial allegations surrounding Caleb, I think it’s funny he went into to the house and immediately said he was attracted to Amber. Anyone think that was the producers idea to not have another Brittney???? #producermadeup to avoid the controversy. Never believe what you see on TV. Trust me I know.

Or maybe he’s not a bigot at all and just said something really stupid on his instagram page a couple years ago. Seems to be pretty friendly with Frankie too.

It’s called playing the part. He was prepped by product erstwhile before going in and told to be friendly with them.

Christine is so annoying, scared of her own freaking shadow.

Amber is very very pretty! Can you really blame him though!