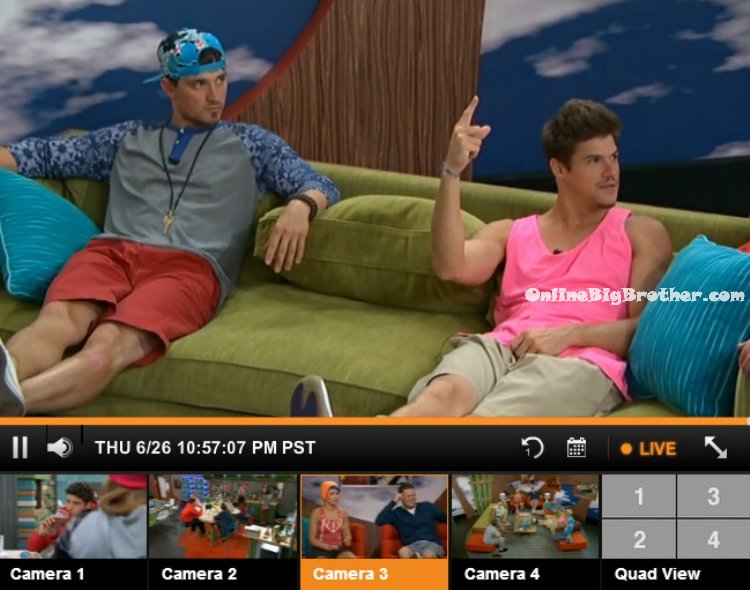 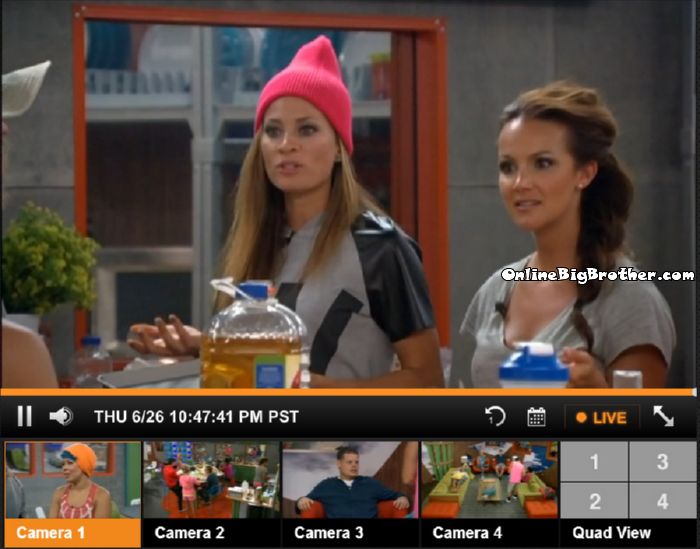 Amber and Brittany are making slop balls and other slop concoctions. lots of random chit chat..
Storage room is still closed. Donny making Cricket sounds in the background (Sounds real I thought it was the return of the saboteur BB12) 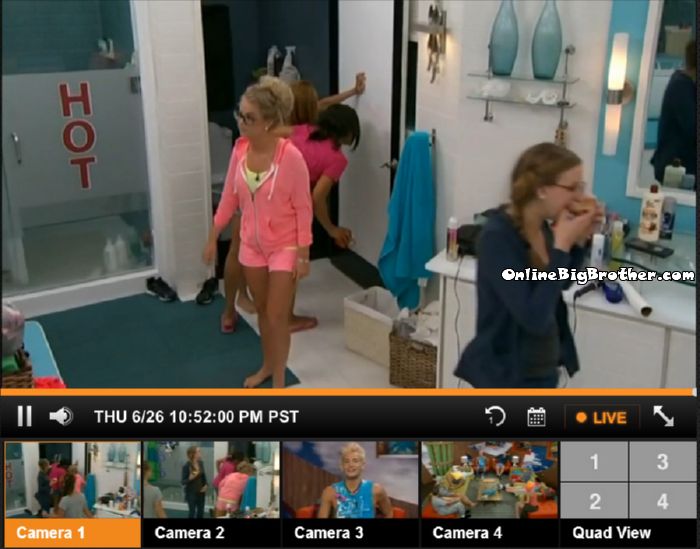 10:52pm Bathroom Paola see’s some graffiti written in the bathroom stall. Jocasta and Nicole race inside to find out what it is.  Paola – “Jessie K Loves U.. or whatever” (BB15 Jessie K)

Big Brother 16 Live Feeds are now ON! if you don’t have them yet what are you waiting for! Try It Free! Subscribe now to the official BB16 Live Feeds

10:45pm – 11pm Camera 3 &4  In the living room. Zach says that he gave his mom his ipad so that she could watch him on the live feeds. Zach leaves. Frankie asks Derrick how good it went earlier today. Derrick says so good. Victoria joins them and Frankie starts making faces. Victoria says she hope they get money tomorrow. She stops and says I mean the unitard. Caleb comes out of the diary room and says who wants to see my HOH room… Frankie asks really?! Caleb holds up the key on his neck and says no.. just kidding it’s the same one I’ve always had. They ask him if he gets his letter. Caleb says no, the next HOH gets that. They start playing a word guessing games. 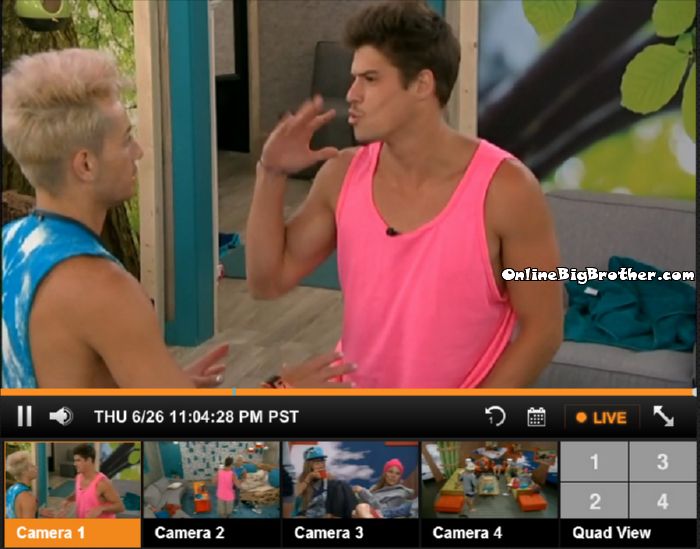 11:03pm HOH Zach and Frankie
Frankie says he would rather Cody or Zach to win he’s worried Devin will win POV and go crazy again. Zach and Frankie are talking about final 2 and making up side alliance. It’s the standard divide and conquer. Frankie says he approached Christine already for a side alliance. Zach says he’s approached Derrick already “Me Cody, Derrick there will be the final 3 we’ll figure out a name that is my alliance.” Frankie is going to do the same thing with Christine and one other houseguest.
They both laugh Frankie “theres like 7000 alliances”
They both agree that Devin has “lost it.. Lost his mind” Zach and Frankie agree Cody hates Devin.  Zach is certain Devin and Caleb are working together.
They agree Caleb will self destruct
Zach – “Caleb and Devin are the top two target right now”
Frankie agrees. They bring up the 8 person alliance that Devin wanted to form. Zach – “Who wants to be in a 8 person alliance, how does that work”
Frankie – “I think we should stick with the plan”
Zach – “Backd**r Joey”
Frankie – “no that was never a plan that was the rantings of a mad man”
Zach – “that was Devin’s plan”
They laugh.
Frankie – “I would feel more comfortable with POW going home”
Zach – “POW will self destruct” (POW = paola)
Zach says Nicole and Christine are very close. 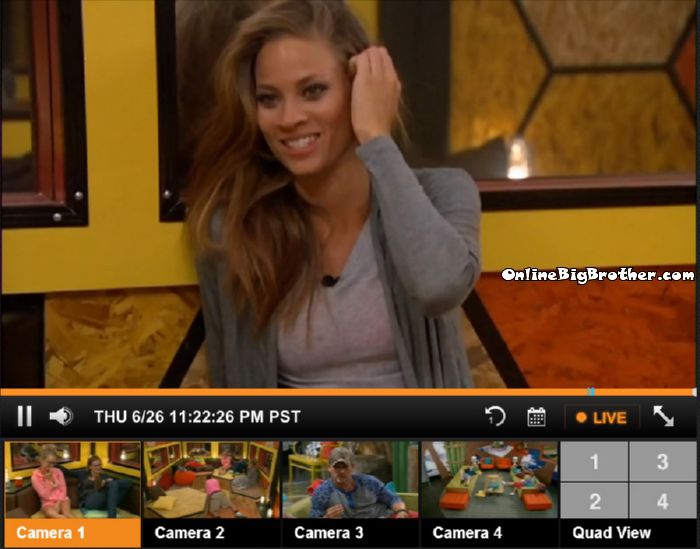 11:19pm Lounge Christine, cody, Nicole and Christine
Random chit chat.. Amber joins them they start talking about how much they miss loved ones back home. Amber misses her sister Christine misses her husband. Derrick rolls in with Brittany behind. Cody complains that the protein shakes are giving him gut pain. Hayden rolls in says he had two scoops and is feeling bad as well. Jocasta and Frankie join them.. just chit chat. 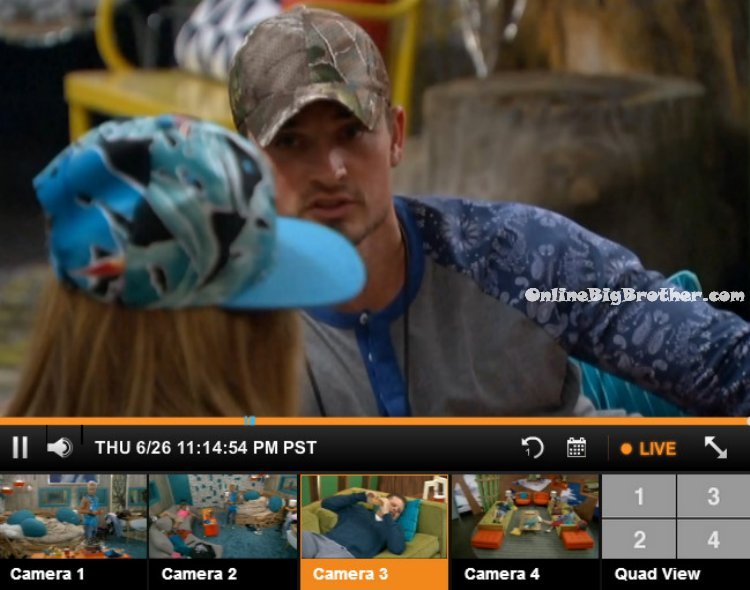 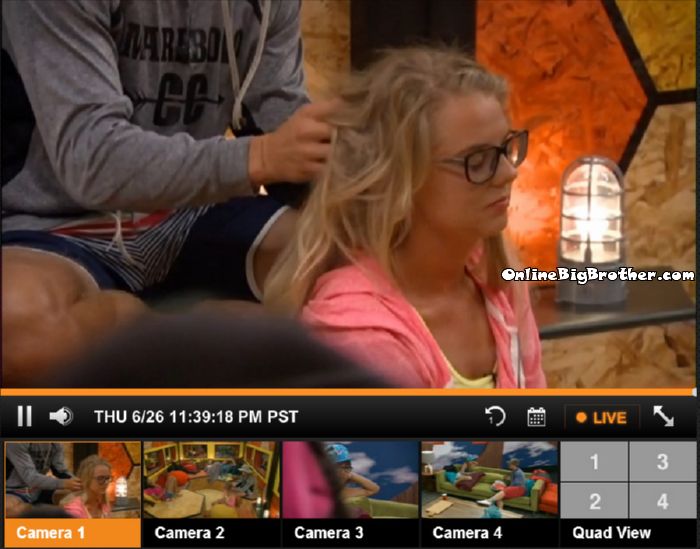 “Caleb says that Amber doesn’t want people to think we’re anything. He says that he just wants to talk with her and get to know her better outside of the house.I want to get to know you on that level. Caleb says Hayden and Nicole are obvious about liking each other. Caleb says that Amber told Frankie that she doesn’t like muscle guys but that he told her I wasn’t like that. Paola says that she wants to see it before she leaves. Caleb says that he doesn’t want to do it out in front of other people.”
I’m sorry am I watching Big Brother or the Bachelor? I know we’re 5 days in and it’s still early, but… we’re 5 days in why are we already forming showmances. Like I said 5 days in, I’d be more worried about the game than bringing home a woman i’ve known for 5 days

Caleb just said he knows Amber likes him because she looked at him. Dudes hmgonna end up getting expelled for doing something stupid

Caleb’s obsession with Amber is vomit inducing. He doesn’t just talk like the usual showmance people, he sounds like a creeper. Derrick deserves at least a beer for listening to all his crap and playing along.

They always know each other much longer than the show is on. they meet before the final 16 are solid, while sequestered for like a week prior to entering the house i think, and when they enter the house, by the time wednesday rolls around they’ve been together about a week. we just see taping of the entry that is done days earlier. That’s why they have so many random clips by the 2nd show, they can’t have all those clips and all that carrying on when people know each other for 5 hours.

still, way too soon for him to be obsessed. It’s like he is very insecure or desperate or something – not to mention OBSESSIVE. STOP.

i know! what is wrong with this guy?!? who loves someone they met 5 minutes ago. and what happened to the game (remember it’s called Big Brother)? RED FLAG. poor amber, RUN.

Caleb is weird to me, I can’t really explain it though. Weird vibes.

Yeah. Caleb is something else. He’s falling way too hard, way too fast.

Zach openly admits he is a con artist… not sure if he is really into Frankie or if he is just conning him…. thoughts?

I hate how late the feeds are. It’s confusing how Joey becomes the backdoor target, who’s in an alliance and what has happened. I’m missing the production of BB Canada already. :))

I think Caleb is the new Danielle. Who could forget her crazed infatuation with Shane…lol #stalkerstatus

I like these new twist it keeps Big Brother even more interesting the past seasons were starting to become the same thing and people were fighting the system to well! just my opinion.

Totally agree on this. Everything was getting far too predictable and the producers & WE FANS needed a fresh start with new strategizing.

Simon and Dawg…Thanks so very much for this wonderful site. I’m so excited that the games have begun. At first glance, seems like all the houseguest are a legend in their own mind and I cant’ wait for the “Delusions of Grandeur” season to play on. We are all in for some fun this season…Happy Summer All